According to the Bible, it was here that the Israelite general Gideon chose his best soldiers to fight the Midianites. But Israel’s Gilboa mountain ridge is also well-known for its gorgeous flowers in springtime. In February and March, tens of thousands of tourists head to the Gilboa to photograph the carpets of red and purple irises, orchids and anemones.

This peak, 650 meters above sea level, is also famous for its awesome 360-degree scenic views of the Jezreel Valley, fishponds, the birds they attract, colorful patches of farm lands, Mount Tabor, the mountains of the Jordan Valley, and on a clear day, Mount Hermon. Not to mention its archaeological sites, biblical and historical landmarks.

But even in summer, when the sun is blazing and you’re looking for a place to cool off, the Gilboa area – although not usually the first to come to mind – should be your main destination because of its natural springs.

“One of the main reasons to go to the Gilboa area is for the water,” says Shlomy Gabay, a tour guide/storyteller who specializes in guiding families around Israel. “There are all sorts of water sources in this area. There’s Sachne [Gan Hashlosha National Park] with warm water throughout the year, the Park of Springs and the Valley of Springs. It’s a day of fun out in Israel’s nature.”

Start your trip on the Gilboa Scenic Road (Route 667). The road follows the ridges of Mount Gilboa (which is not one single mountain) and gives visitors the best views of the surrounding areas.

It’s a mix of historical and scenic along the road lined with picnic spots, trails into the woods and extreme sport activities like hang-gliding.

Mount Saul and Saul’s Shoulder – named for biblical King Saul, who according to tradition led the Israelites to defeat here at the hands of the Philistines – are two of the main areas for recreation. Mount Jonathan, Mount Avinadav, Mount Melchishua, named for Saul’s sons, are also good places to stop and look around.

Along the road there are other scenic outlooks, trails and archaeological landmarks.

What you cannot see from the road, however, are the numerous springs and natural water sources emerging from the Gilboa range. So veering off the scenic road is just as important as staying on it.

If you’ve decided to visit this region without a guide, the three easiest springs to access are Gan Hashlosha, Harod Spring and Ganei Huga. 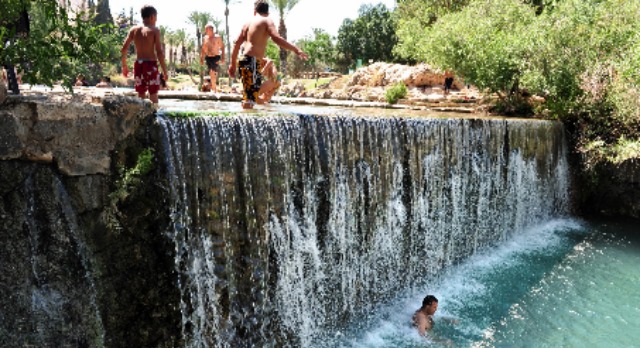 In summer, Gan Hashlosha National Park is so popular that it’s actually better to visit off-season. The Amal Stream crosses the park and widens into gorgeous pools.

Israelis – as well as tourists – make a full day of it and bring picnic baskets and enough BBQ supplies to feed an army. Thanks to the Parks Authority, dozens of tables are set up in the shaded forest area around the pools.

The Harod Spring Nature Reserve boasts one of the largest pools in Israel, as well as sprawling lawns, a picnic area and looming eucalyptus trees. The Harod Spring emerges from a rocky cave on the slope of Mount Gilboa.

Before you take a dip in the pristine waters, hike up the slope above the spring to the Hankin House. This is where Yehoshua Hankin, a Zionist activist who was responsible for most of the major land purchases of the World Zionist Organization, built a structure during the British Mandate. There’s a magnificent view of the valley from this spot.

The third easy access point to check out is Ganei Huga water park with natural springs. Think blow-up rafts, a zip-line into one of the pools, and a mini playground area in another. There are also shaded places designated for picnics and barbeques.

Another option is to hike from the top of Mount Gilboa, following the orange sign markings, down through the Valley of Springs to the Harod Stream. The trail then passes by the ancient Crusader fortress Belvoir, the Ottoman railway, Kibbutz Tirat Tzvi and over to the city of Beit She’an. The trail takes up to six days to complete.

For many travelers, the Valley of Springs is a bit too crowded and regulated. Those looking for something slightly more rustic tend to head over to the Park of Springs (Hamaayanot) at the foot of the Gilboa ridge. 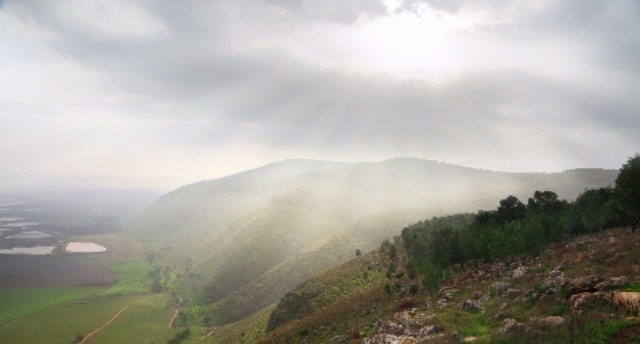 The Gilboa in bloom. Image via Shutterstock.com

The Park of Springs was inaugurated in 2011 and includes the beautiful Shokek Spring, Moda Spring and the Kibbutzim Stream (Nahal Hakibbutzim). To get to these water sources, you need to walk, bike or rent a green mode of transport such as electric vehicles.

The 15 kilometers of paved paths leading to the springs are not shaded but there are ample shady groves near the springs to escape the sun.

The area is also good for bird watching, thanks to the fishponds in the area.

And while most of your fellow travelers will pass you by on foot or by bike, Kibbutz Nir David rents out Bar-of-Fun for groups – a 17-seat bicycle that includes a beer bar and a guide.

“Come by car, in a golf cart, ride a bike, walk, swim, however you want,” says Gabay. “Come and learn the history of the Gilboa or just see its beauty.”