From its unimposing exterior, one might be surprised to learn that what lies underground at the site of the new Memorial Hall of Israel’s Fallen is an architectural masterpiece. The emotionally impactful memorial, set atop the historic Mount Herzl in Jerusalem, was designed and constructed by Kimmel Eshkolot Architects to commemorate members of Israel’s security services killed in the line of duty.

The hall, commissioned by Israel’s Department of Families, Commemoration and Heritage, was inaugurated in late 2017 upon completion but it wasn’t open to the public until recently. Now, visitors can experience the memorial with public tours and follow along with a video app that takes them through the stories of the fallen and the uniquely designed site. 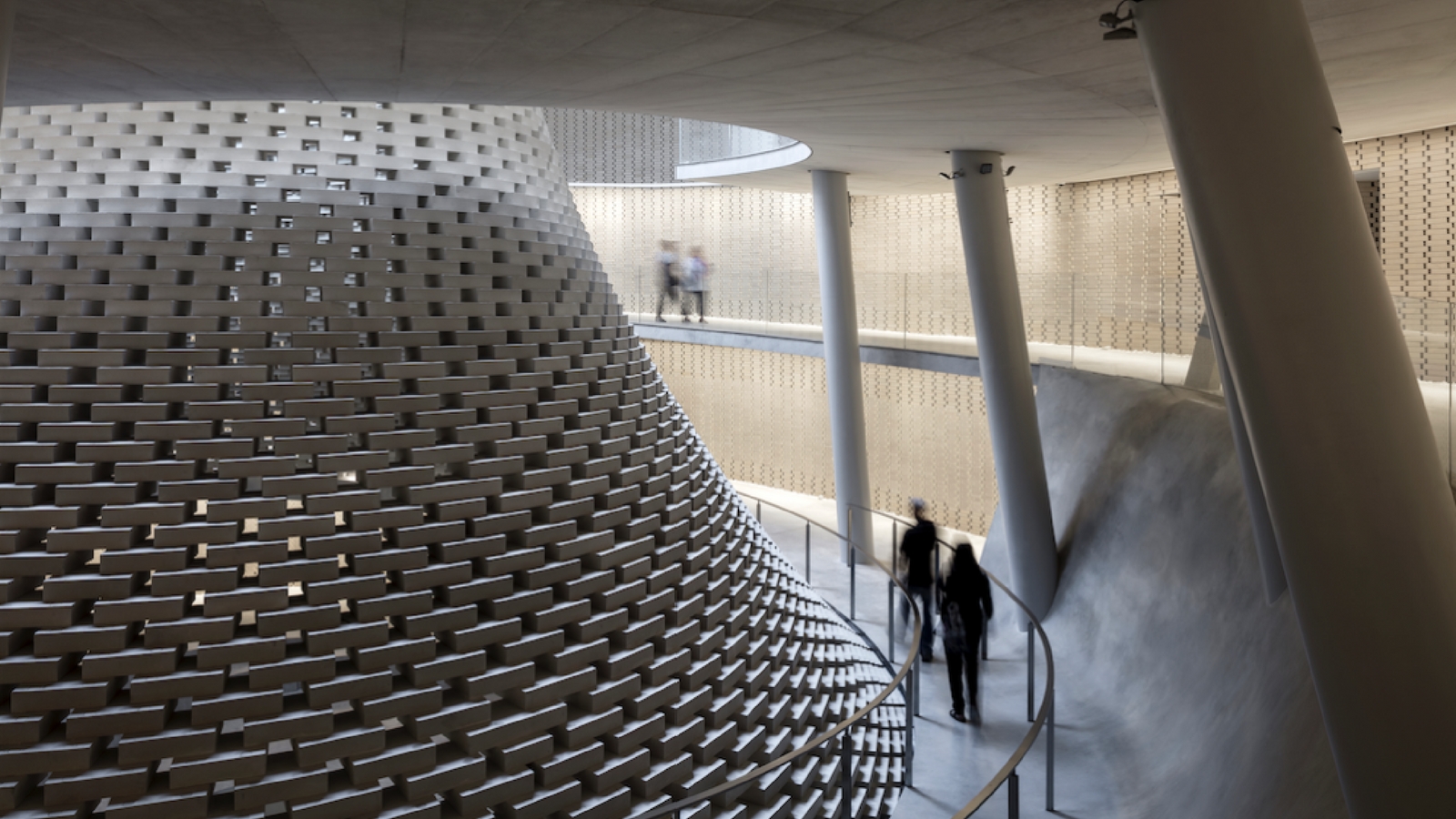 The Memorial Hall of Israel’s Fallen. Photo by Amit Geron

At the center of the memorial, intended to be both a collective and personal experience, is a 250-meter “Wall of Names” composed of 23,000 commemorative bricks, each individually engraved with the name of a fallen soldier and date of death.

A computerized system, custom built for the memorial in collaboration with ETH’s ROB Technologies, illuminates each engraved brick on the anniversary of the person’s death. 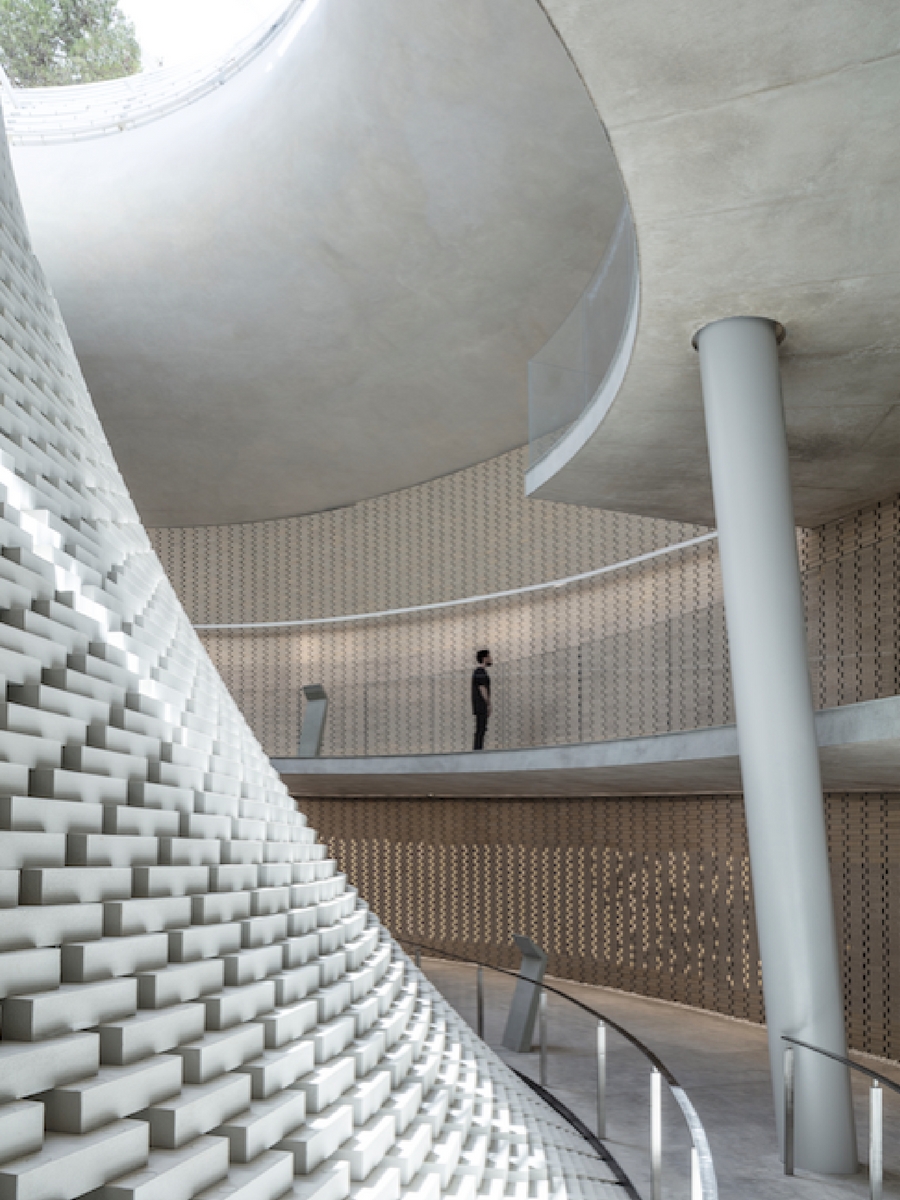 Daylight enters through the oculus of Memorial Hall and is filtered through the bricks. Photo by Amit Geron

The continuous, spiraling wall wraps around a central commemoration hall, where an undulating funnel-shaped formation of bricks opens to the sky.

“The special shape of the funnel is like a vortex – a natural phenomenon – playing with the daylight falling into the hall, making the daylight a ‘building material,’” Etan Kimmel, co-founder of Kimmel Eshkolot Architects, told Dezeen.

The architects excavated the building into the mountain to allow for the abundance of daylight in the hall, which enters through the oculus and is filtered through the funnel of bricks. 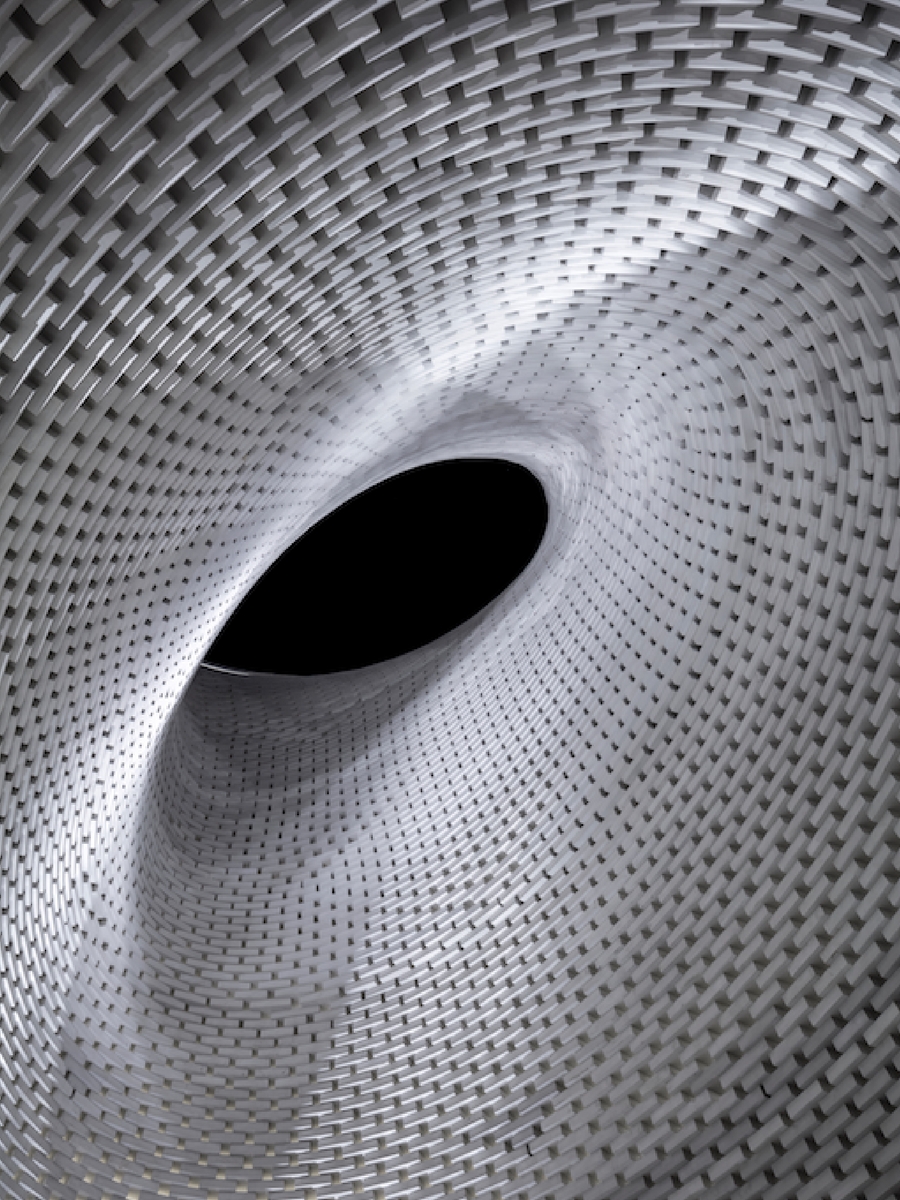 The architects worked with the IDF’s engineering department to execute plans for the vortex shape. Photo by Amit Geron

Kimmel Eshkolot constructed several 1:1 mockups at the Swiss Institute of Technology in Zurich to test the construction of the funnel. While their initial strategy was to glue the bricks to one another, aiming at minimal overlap between the elements, this method did not meet the local building regulations.

Together with Ackerstein Industries and the IDF’s engineering department, which Kimmel said helped with the execution plans for the vortex shape, the architects developed unique concrete bricks with steel cores that are screwed together at pre-cut joints. After considering the structural loads, the final bricks were made from aluminum to reduce their weight. 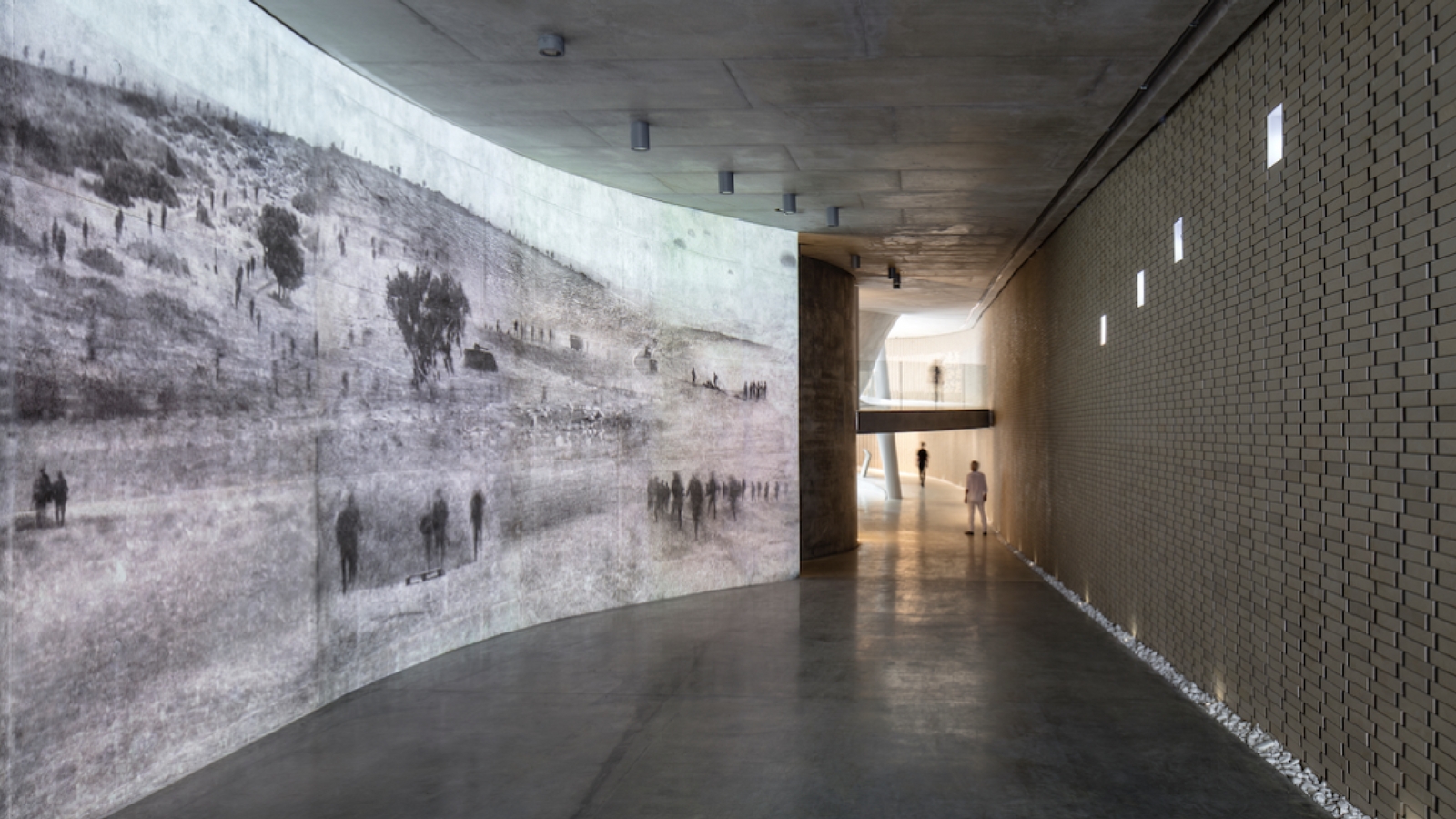 Visitors take guided tours of the memorial with a video app. Photo by Amit Geron

The memorial hall’s unassuming exterior follows the topography of the mountain with curves of light Jerusalem stone echoing the stone texture of the adjacent Mount Herzl, Israel’s national cemetery. 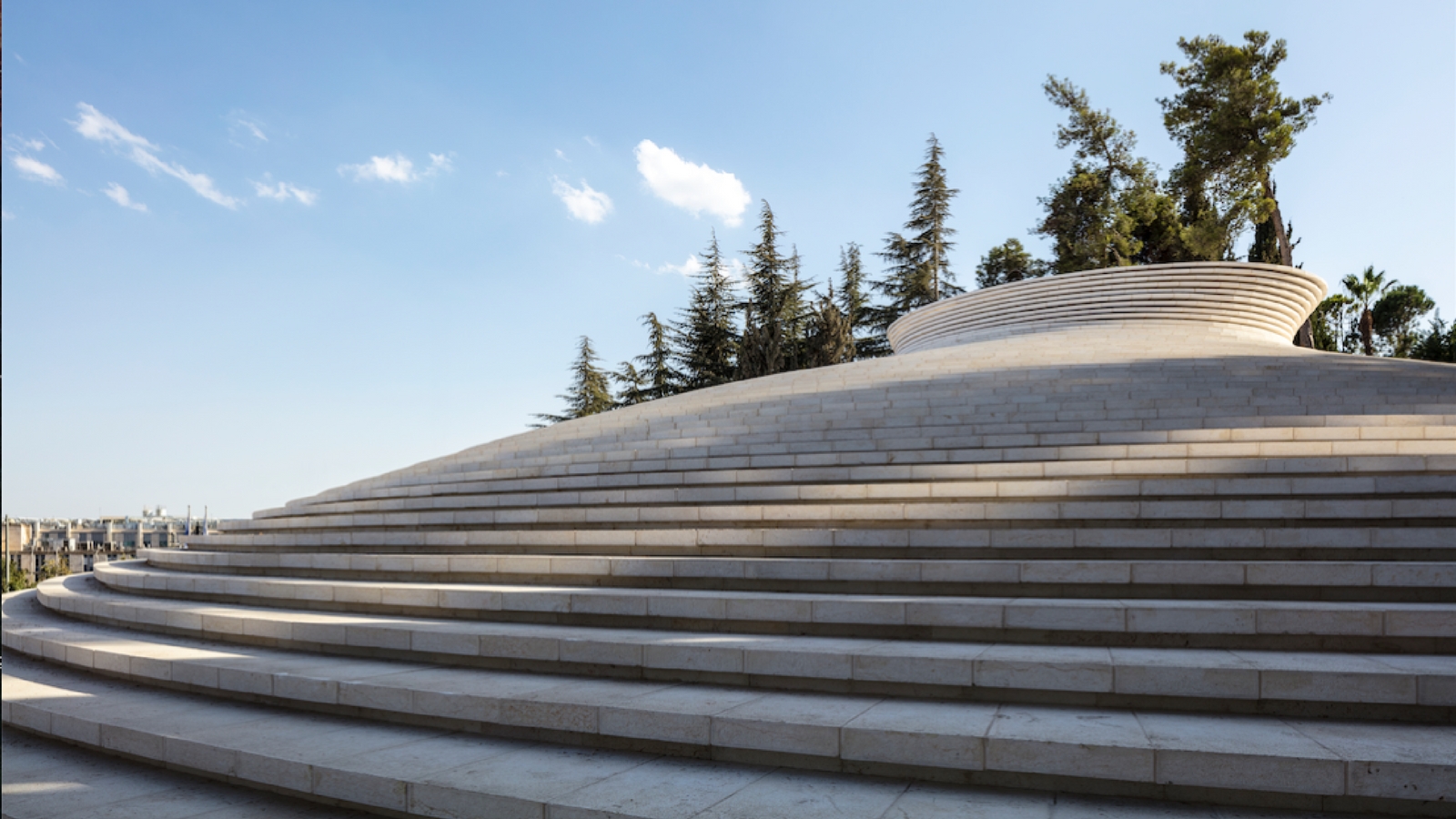 The exterior of the memorial hall. Photo by Amit Geron

The Memorial Hall of Israel’s Fallen is one of 62 projects around the world in the running for the Royal Institute of British Architects’ 2018 international prize for world’s best new building.

Buildings from more than 28 countries are on the list of contenders, from Thomas Heatherwick’s Zeitz MOCAA in South Africa, to Dorte Mandrup Arkitekter’s Wadden Sea visitor center in Denmark, to a post-earthquake reconstruction project in China.

The biennial prize will be awarded in December 2018, for only the second time. The Universidad de Ingeniería y Tecnología in Lima, Peru was the first winner in 2016.