Home TourismBiblical Sites Digging into the origins of Jerusalem

When King David captured Jerusalem from the Canaanites in approximately 1000 BCE, it was a small city situated on a ridge, known today as Mount Zion.

Recently, I stood with a group examining a corner of what may very well have been King David’s palace in the City of David National Park,  just south of the current Old City walls.

Our guide, Yehuda Deutsch, asked us why we thought David founded his city in this place.

Politely piecing together the bits of our answers that were relevant, while delicately discarding those that weren’t, Deutsch then asked another question.

“What are the two basic conditions needed for a city to exist in ancient times?”

The answers turned out to be “water and security.”

Deutsch pointed down the southern slope of the hill known as Mount Moriah.

“Down there, under the roots of the palm tree that is beyond the red tile roof, there is a spring that produces 100 cubic meters of water per hour on average.” 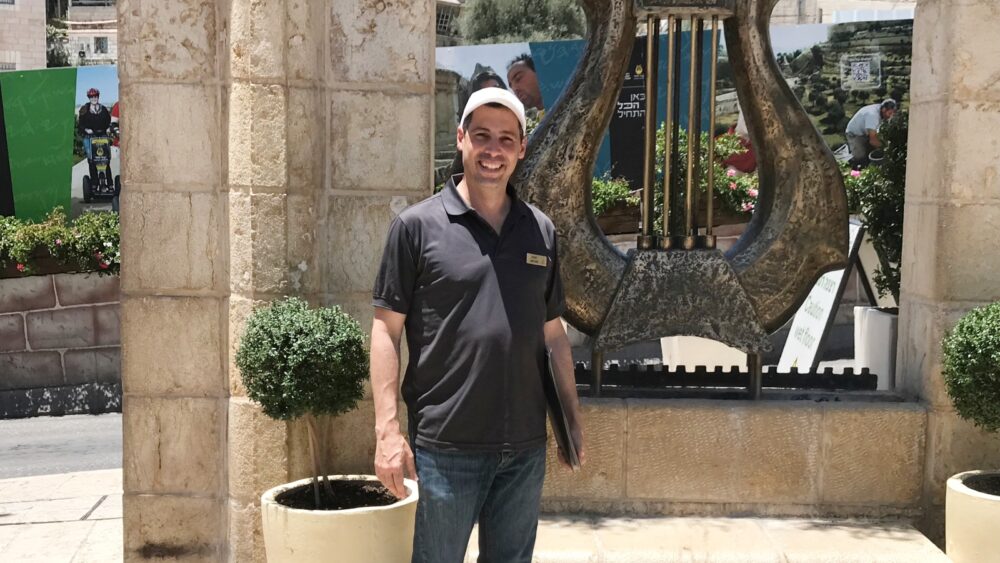 City of David tour guide Yehuda Deutsch stands inside the entrance to the visitor’s center, next to the iconic harp. Photo credit Marion Fischel

This is the famous Gihon Spring, the only water source in ancient Jerusalem, through which David led his army to take the city by surprise.

According to the book of Kings I, the Gihon Spring is where the prophet Nathan and the high priest Tzadok crowned David’s son Solomon in 962 BCE. Solomon’s great achievement was building the First Temple, which stood on the nearby Mount Moriah for more than 400 years.

Sometime in the eighth to ninth centuries, Solomon’s descendant King Hezekiah had a channel cut into the rock under the City of David to secure water supply to the Temple and surrounding inhabitants in case of an enemy invasion. Hezekiah’s Tunnel guides the water from the Gihon to the freshwater Siloam (Shiloah) Pool reservoir.

The site of Solomon’s coronation ceremony, the Spring Citadel, is an enormous 3,800-year-old Canaanite fortress revealed in 2014, after 15 years of excavation.

Built around the Gihon Spring to isolate and protect the city’s water source, the fortress walls are seven meters (23 feet) wide, and each stone measures 2-3 meters (6.5-9.8 feet).

The Spring Citadel was in use until the Babylonians destroyed the First Temple in 586 BCE. It appears to be the largest fortress built in the Land of Israel until the time of Herod.

“If you look at the mountain opposite,” said Deutsch, “you will see that nowadays there is a slope you can climb. But thousands of years ago there were just a series of cliffs, one above the other: cliff, surface, cliff, surface. This meant that if an enemy army wanted to conquer the city, they had to climb several cliffs to reach the wall.”

A half millennium ago, the Ottoman Empire’s Sultan Suleiman the Magnificent restricted access even more by building the Old City walls.

“Those walls are young,” Deutsch said. “We, on the other hand, are in the ancient city.”

Amazed from the experience

Deutsch, who has been guiding tours for 16 years at the City of David, explained that in 1867, Queen Victoria sent Captain Charles Warren to dig in the Mount Moriah area. Due to restrictions set by the Ottomans, he could only excavate the southern slope and that is where he uncovered the City of David and Hezekiah’s Tunnel.

He discovered a massive fortification and a vertical shaft that rises to an upper man-made tunnel, connecting the Gihon Spring to the top of the hill. The shaft was named “Warren’s Shaft” in his honor.

Warren’s discoveries brought world attention to the site, and France, Germany and the United States also sent expeditions. The next wave of archeological interest began in the 1960s, increasing after the Six Day War.

In 2005, the late Eilat Mazar, a former archeology student who worked on Yigal Shiloh’s City of David excavation from 1981 to 1985, returned to the site as a card-carrying archeologist, with funds to dig further. 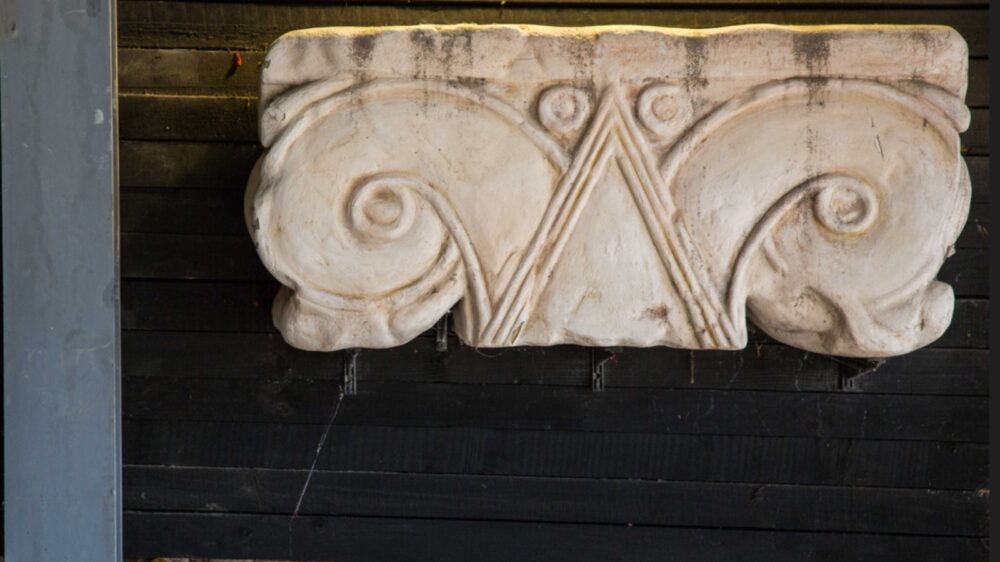 Proto-Ionic stone capital found at the City of David. Photo by Avishag Shaar-Yishuv

Mazar first discovered a 4-meter-thick wall running from east to west on top of the mountain. Then her team uncovered another wall, 6 meters wide, going north to south.

Where these two walls meet, they form a corner of what, judging by the thickness of the stone, was not a private home. Mazar dated this corner to the 10th century BCE, 3,000-plus years ago, to the days of David and Solomon.

Could the spot where these two walls meet be a corner of King David’s palace?

Deutsch explained that subsequent generations of David’s dynasty would have continued occupying this palace.

Thus, it would be reasonable to expect to find evidence of the last king of Judah who could have used the building, namely King Zedekiah.

In 2007, Mazar found two charred pottery seals near that corner, from the time of the destruction of Solomon’s Temple. Each is inscribed with a Hebrew name: Yehucal ben Shelemiah and Gedaliahu ben Pashchor.

What is the connection between these seals and David’s palace?

In the days of King Zedekiah, the prophet Jeremiah predicted the destruction of the city. The Bible tells how, infuriated by this news, Zedekiah sent four of his ministers to throw Jeremiah into a pit.

Two of the names of these ministers match up with the names found on the preserved seals: Yehucal ben Shelemiah and Gedaliahu ben Pashchor.

More excavation is needed to confirm whether the corner wall belonged to King David’s palace.

Nevertheless, a pediment (gable) discovered in its proximity, currently on display in the Israel Museum, also dates to the time of David. A replica of the original now hangs opposite the corner of the probable palace. An engraving of the same design appears on the current Israeli 5-shekel coin. 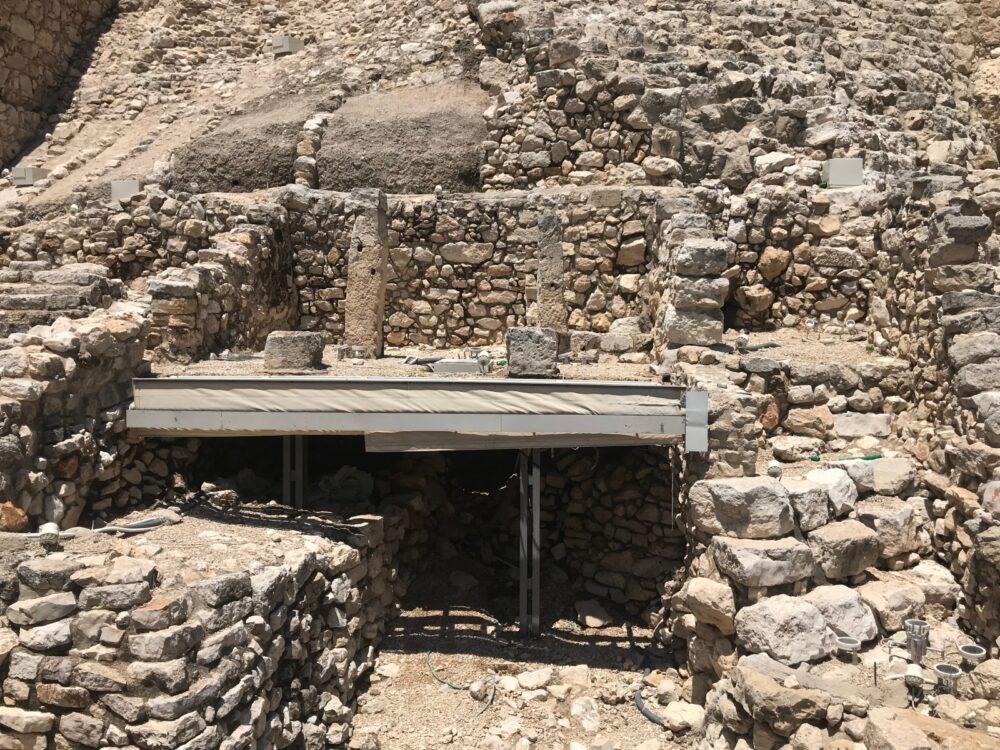 The remains of a two-story, four-room house in the City of David. Photo by Marion Fischel

The remains of a First Temple era “four-space” private home sit at the foot of what is likely David’s palace. Two of the house’s columns are still standing.

A display cabinet nearby reveals a model of the two-story house intact. Similar four-space buildings can be found all over the country in archeological sites of that time, approximately 970-586 BCE. 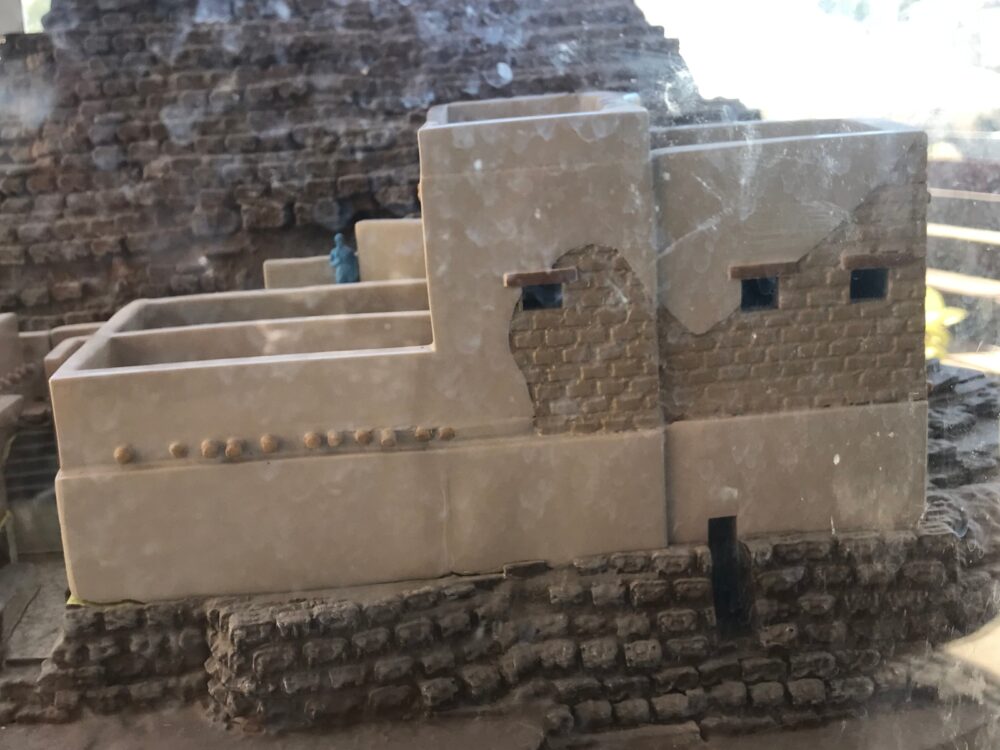 A model of the two-story house seen through a glass case. The entrance to the toilet room is on the far right. Photo by Marion Fischel

The owner was clearly a rich man, explained Deutsch, because of the proximity of his dwelling to the king’s palace and because of a private toilet with a separate entrance in an extra downstairs room.

The toilet contained 2,600-year-old bacteria revealing that the last person to use it ate a green salad and uncooked meat. (Presumably, there was no time for cooking before escaping from the flames that were engulfing the city, Deutsch said.) 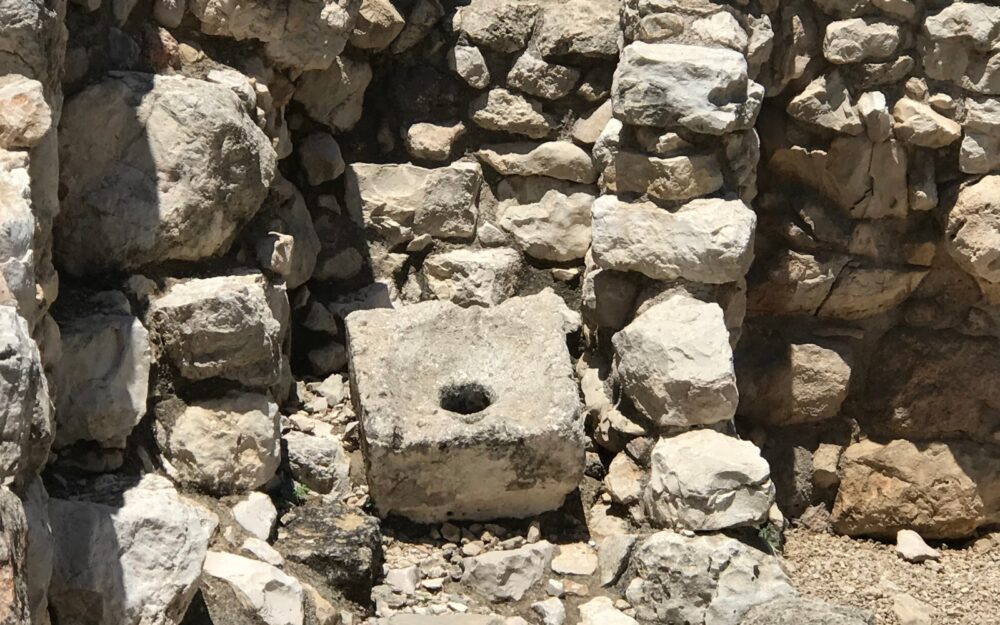 A toilet discovered on the lower floor of a four-room house in City of David. Photo by Marion Fischel

West of the entrance to the City of David, the Givati parking lot excavation has become the largest active archeological site in Jerusalem and the guardian of clues to 11 separate civilizations.

In 2008, the dig uncovered the basement of a large Roman villa, believed to have belonged to the Assyrian queen Helene. She converted to Judaism and moved to Jerusalem in the Second Temple period. A single gold earring inlaid with pearls and precious stones was also found, and possibly belonged to her.

The same year, a cache of 264 gold coins was discovered hidden inside a wall of a Byzantine building in the dig. Experts dated the coins to 613 CE, the eve of the destruction of the city at the hands of the Persians. These are just two of a long list of outstanding archeological finds at the City of David National Park.

The City of David tour (open every day of the year except on Shabbat and holidays) starts at the observation deck of the visitor’s center with a panoramic view into history. It then goes down through the ancient City of David into the Kidron valley where the Gihon Spring is located.

At the spring, the tour splits into two: a dry route (along an almost 4,000-year-old Canaanite tunnel dating to the time of Abraham) and a wet route (through Hezekiah’s Tunnel). Both end at the Siloam Pool.

If you plan on taking the wet route, bring waterproof shoes and a flashlight (also available at the visitor’s center kiosk).

Another tour that starts at the visitors’ center goes up to the Western Wall through a different system of tunnels. And at night, the Hallelujah Show, projected onto both sides of the City of David, provides a colorful trip through the rebirth of Jerusalem after the Babylonian exile.

Walking up a very narrow 2,000-year-old Second Temple-era tunnel that served as a rainwater drainage system for the ancient city, we had to bend down in places to avoid banging our heads on the ceiling.

I could only begin to imagine the panic, fear, and horror, but also the hope, that the Jews must have felt when using this as an attempted escape route from the Roman invasion.

Above it, the Herodian-era Pilgrimage Road that led pilgrims north to the Temple awaits its unveiling to the public. 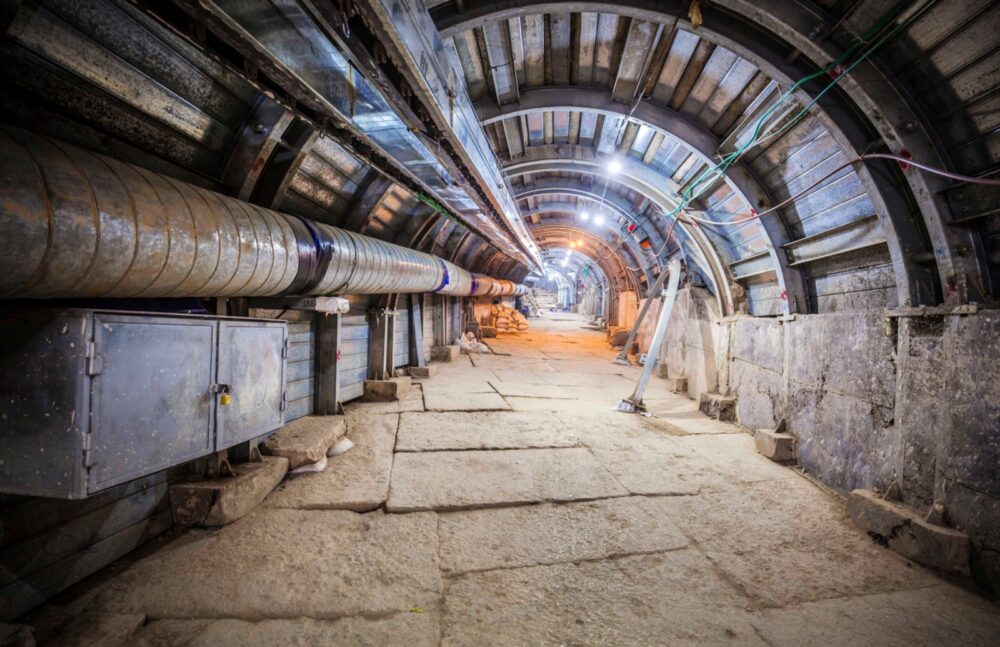 The Pilgrimage Road will soon open to tourists. Photo by Koby Harati

After 15 years of painstaking and fruitful work in the City of David, archeologists Ronny Reich of Haifa University and Eli Shukron of the Israel Antiquities Association last year published a landmark volume, Excavations in the City of David, Jerusalem (1995-2010). Digging continues at the site, with possibilities for visitors to participate.