Rather than labor for a final and comprehensive agreement between Israel and the Palestinians in one fell swoop, US President Donald Trump and Israel Prime Minister Benjamin Netanyahu decided to try a different tactic. The goal now appears to be getting as many Arab and Muslims states to normalize relations with Israel before the US presidential election in November. In so doing, the hope is that the Palestinians will be compelled to return to peace talks. And it just might work.

Already there are normalization agreements between Israel and the United Arab Emirates, Bahrain, Serbia (which is not Muslim) and Kosovo (which is). More than that, the latter two both reportedly committed to establishing their embassies in Jerusalem. And the reality is that many more Arab and Muslim countries are ready to do the same, including recognizing Jerusalem as the capital of the Jewish state, all of which undermines the legitimacy of Palestinian claims and weakens their position. 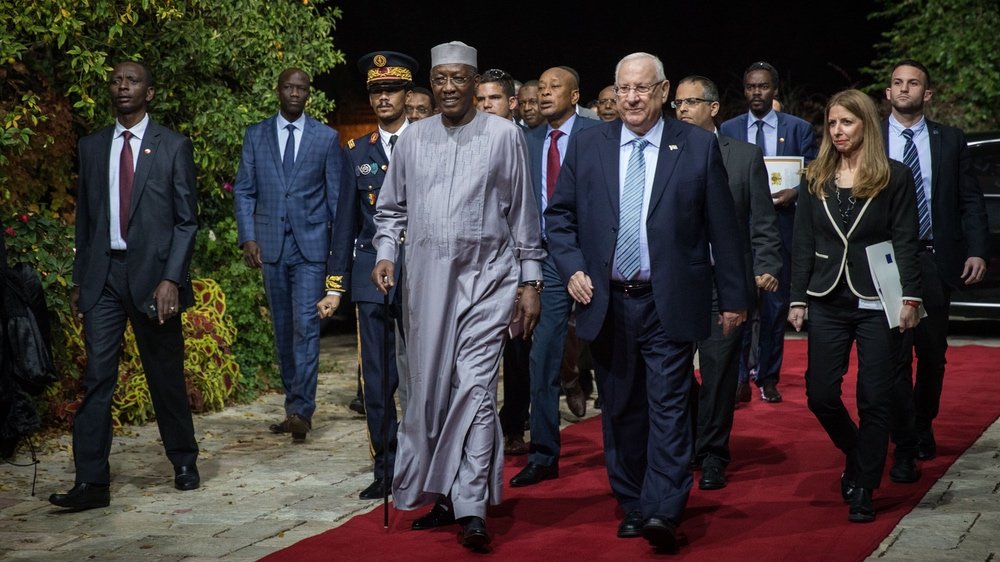 Chad’s President Idriss Deby Itno visited Israel back in 2018. Trump-brokered normalization might now give him the opportunity to formalize relations between his nation and the Jewish state.

It is widely believed that the next Muslim state to normalize relations will be the African nation of Chad. Earlier this month, Chadian Prime Minister Abdel Karim Déby (son of President Idriss Deby) and Chadian intelligence chief Ahmed Kougari met in Jerusalem with Netanyahu to discuss deepening relations, opening diplomatic missions and establishing an embassy in Jerusalem. The two sides also discussed increased cooperation between Israel and Chad in various fields, including counterterrorism, cyber technology, water management and agriculture.

Among the Arab states, next in line after the UAE and Bahrain will almost certainly be Oman and Sudan, which have both warmed up considerably to Israel in recent years. Even Saudi Arabia is on the horizon. This normalization movement is a major shift in the position of the Arab League, and severely impacts the Palestinians.

The Palestinian Authority loudly criticized the peace deals between Israel, the UAE and Bahrain, and Palestinian demonstrators burned pictures of the rulers of these Gulf states.

Palestinian Authority President Abbas originally labeled the agreements as acts of “treason” on the part of the UAE and Bahrain. But on September 8, Abbas seemed to soften his position slightly when he issued a prohibition on any offensive public statements or actions targeting any Arab leaders, including those of the UAE and Bahrain. A subsequent draft resolution submitted by the Palestinians stipulated that the Abraham Accords signed between Israel, the United States, the Emirates and Bahrain “does not detract from the Arab consensus on the issue of Palestine, which is a matter for the entire Arab nation, nor does it change the principled Arab vision based on the fact that the decision to establish two states within the borders of 1967 is the only way to achieve peace in the Middle East.”

The tone of this statement differs markedly from the initial remarks from Abbas himself, who described the UAE normalization deal announced on August 13 as a “betrayal” and a “stab in the back of the Palestinian cause.”

Perhaps Washington and Jerusalem were correct in their calculation that the “snowball” effect of more and more Arab and Muslim states normalizing with Israel would bring the needed pressure to moderate the Palestinians and suppress regional fervor for the Palestinian cause.

Part of this calculation is certainly based on making the Palestinians understand that if Joe Biden wins the US presidential election, then it is unlikely that Israel will sign any kind of agreement with the PA that’s based on the security guarantees of a Democratic president. If it comes to that, then the notion of two states for two peoples in line with the Palestinians’ demands becomes increasingly illusory, and might evaporate altogether, like a desert mirage. If the Palestinians have the foresight to realize this, then Trump’s “Deal of the Century” starts to look a lot more attractive in that it offers immediate and enormous economic benefits. But even that will fail if the Palestinians cling doggedly to their current positions.

In the meantime, more and more countries will continue to line up to normalize relations, preferring Israel and what it has to offer in facing common threats and achieving common goals over the stagnant Palestinian movement. In particular, there is an awakening to the fact that Iran, not Israel, is the true threat to the Sunni Arab states. What we are witnessing is the Arab world finally grasping the principle of “realpolitik,” first implemented by Otto von Bismarck, which places practical considerations ahead of ideology and even ethical premises when determining national policy.