Home Featured ANALYSIS: Will the New Ceasefire With Hamas Hold?

ANALYSIS: Will the New Ceasefire With Hamas Hold?

While Hamas has predictably claimed “victory,” here’s the real reason it agreed to halt the attacks.

On July 31, 2020 Hamas leaders announced that a new ceasefire had been reached with Israel, brokered by Mohammed al-Emadi, Qatar’s emissary to the Gaza Strip.

The ceasefire agreement came after al-Emadi promised Hamas that Qatar would double its monthly financial aid to Gaza to $17 million.

Of this amount, $10 million will go to Palestinian families hardest hit by the huge economic crisis in Gaza, while $7 million will be spent fighting the Corona pandemic, which is spreading in the coastal enclave. Qatar will also supply medical equipment to Gaza, including 20,000 COVID-19 test kits.

Another reason for Hamas’ decision to accept a ceasefire, after launching incendiary balloons loaded with explosives and combustible materials on southern Israel over the past three weeks, has been a change in Israeli strategy to combat the balloon terror, which has devastated hundreds of acres of forest and farmland. 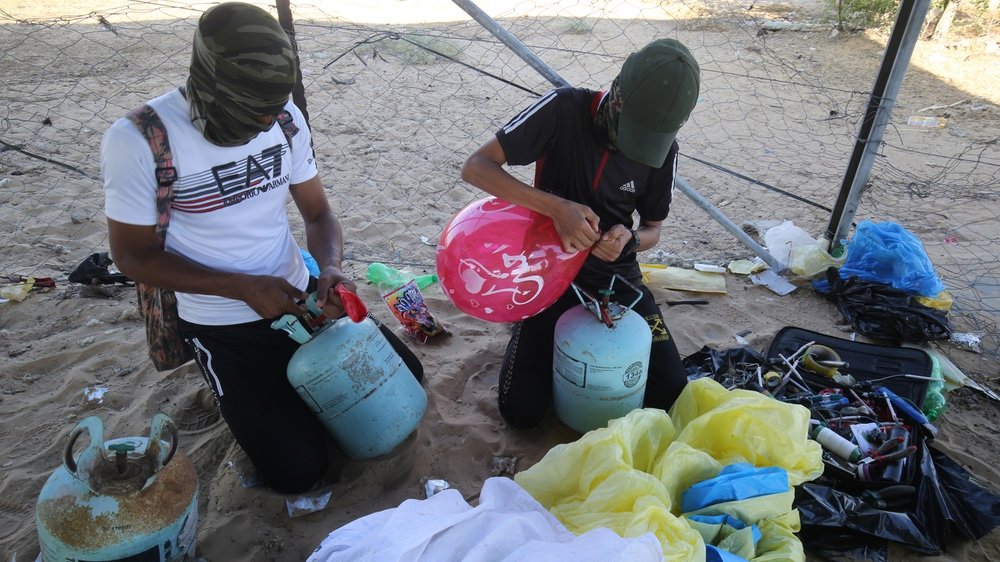 The Israeli army (IDF and IAF) last month began treating balloon terror as the equivalent of rocket fire on southern Israel, and retaliated by hitting over 100 Hamas military targets in Gaza.

The change in military strategy has been compared in Israel to the way the IAF responds to any attempt by Iran to create a new front against the Jewish state in Syria. On Monday, the IAF again bombed the T-4 base near the Syrian city of Homs for this very reason. 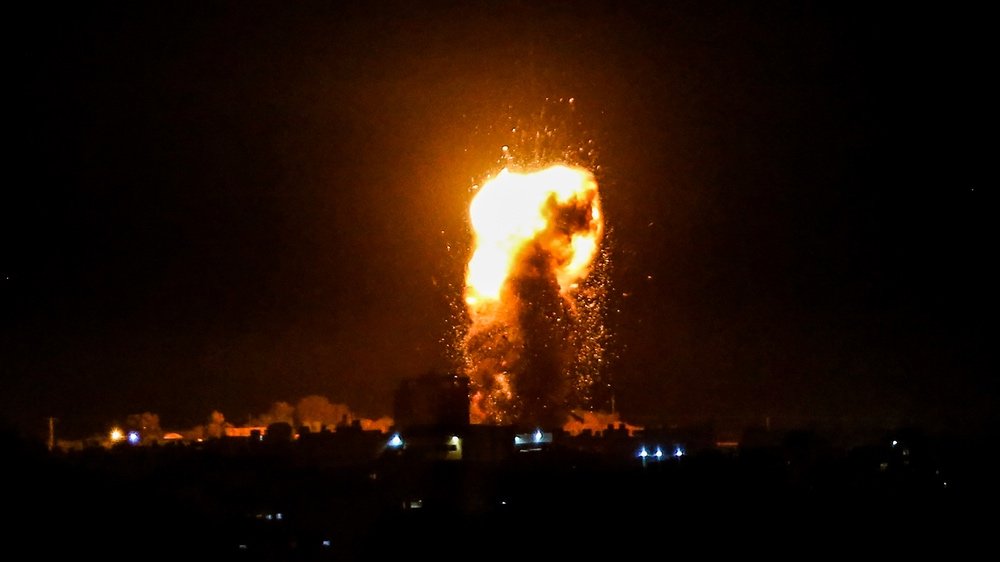 A ball of fire rises as Israel bombs a Hamas target in the southern Gaza border town of Rafah.

Brig.-Gen. Hidai Zilberman, a spokesman for the IDF, told reporters that while the vigorous military response to the balloon terror was certainly partly to thank for Hamas’ decision to accept a ceasefire, Israel’s economic sanctions against Gaza had also played an important role.

On August 13, Israel closed the Kerem Shalom border crossing where goods and fuel are usually delivered to Gaza and drastically reduced the fishing zone off the coast of the Strip.

The cessation of fuel supply caused a major electricity shortage in Gaza, where the population increasingly is turning against Hamas. Gaza has only one power plant that runs entirely on diesel fuel.

Israeli commentators say the loss of support among the Palestinian population in Gaza is the main reason Hamas agreed to a ceasefire. 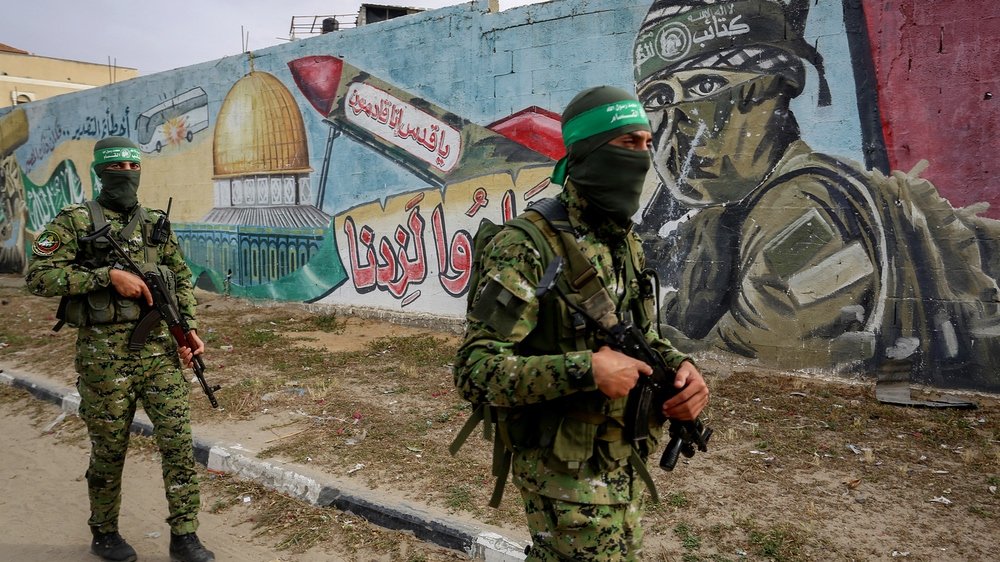 Hamas gunmen patrol the streets, while propaganda in the background urges the population to join its jihad against Israel.

Hamas used the Corona crisis in Gaza as leverage against Israel and warned last week that if Israel did not lift the blockade, “not only the Palestinian population would suffer,” meaning it would again target the Israeli civilian population living in the vicinity of Gaza.

Officials dealing with the escalating Corona crisis in the Jewish state previously warned that Israel’s already-overburdened health system would collapse if Corona patients from Gaza would come to Israeli hospitals for medical treatment.

Hamas used the growing Corona crisis in Gaza as a weapon against Israel, said Dan Diker of the Jerusalem Center for Public Affairs (JCPA). Diker is head of the JCPA’s Political Warfare and Boycott Divestment and Sanctions (BDS) Program.

By presenting the growing Corona crisis as a result of the Israeli sanctions against Hamas, the terror group is seeking to turn public opinion against Israel and to regain support from its own population, Diker said.

Real reason for the ceasefire

The ceasefire agreement between Israel and Hamas came about after a series of telephone conversations between Ishmail Haniyeh, the head of Hamas’s political bureau, and Sheikh Muhammed bin Abdulrahman Al Thani, Qatar’s foreign minister.

After the ceasefire announcement, Al-Emadi, Qatar’s envoy in Gaza, praised the Hamas leadership, which he said had shown responsibility. He added that the appalling condition of the population in the Gaza Strip had contributed to the decision to accept to a ceasefire.

However, Diker says Hamas leaders only agreed to stop the renewed violence against Israel, which included rocket fire and organized violent rallies near the security fence on the Gaza border, after realizing that there could be a popular uprising and that their regime was in danger.

Hamas now presents the ceasefire as a victory over Israel, claiming that “the resistance has broken the blockade.”

“The resistance was able to force the enemy to accept our conditions,” Hamas-affiliated political analyst Khaled al-Najjar said.

Observers in Israel now think it is a matter of time before another round of violence breaks out.

Indeed, on Wednesday, a Palestinian Arab man from Gaza tried to infiltrate Israel armed with a large knife and an explosive device, but was apprehended by the IDF.

Another sign that nothing has changed was a meeting between a high-level Hamas delegation led by Ishmail Haniyeh, the group’s political leader, and representatives of Palestinian Islamic Jihad and Hezbollah in Lebanon earlier this week.

Haniyeh is increasingly presenting himself as a regional leader who has access to governments belonging to the ‘resistance axis,’ which consists of Turkey, Iran, Syria, and several Iranian-supported terror groups.

The Hamas leader also got a red-carpet reception from Turkish dictator Recep Tayyip Erdogan, who is supporting Islamist groups in Israel and Gaza and is firmly on Hamas’ side in its prolonged conflict with Israel.

UPDATE: On the Way to a Cure for Coronavirus?