When you think of Georgia, do Southern belles and peaches come to mind? Well, we’re not talking here about Georgia the US state but Georgia the country in the Caucus region of Europe, part of the former Soviet Union until it claimed independence in 1991.

Georgia is known for its folk dance, millennia-long history of wine- and cheese-making, expansive mountains, and unique cuisine.

Georgian Jews — a close-knit community making up only a small fraction of the former Soviet immigrant population in Israel — have in recent years been catapulted to the forefront of the Israeli restaurant scene because of their delicious and unique food culture.

Attracting curious Israelis who long for a taste of Georgian hospitality (and a little khachapuri!) more than traditional Russian fare, Georgian restaurants are now having a moment in Israel, from Sarona gourmet food market in Tel Aviv to the streets of Jerusalem and the beachfront of Ashdod, where they spread the Georgian passion for food, fun, dancing, and hospitality.

Here’s where you can get yourself some cheburek meat pie, churchkhela candy, and some of that Georgian wine, of course. 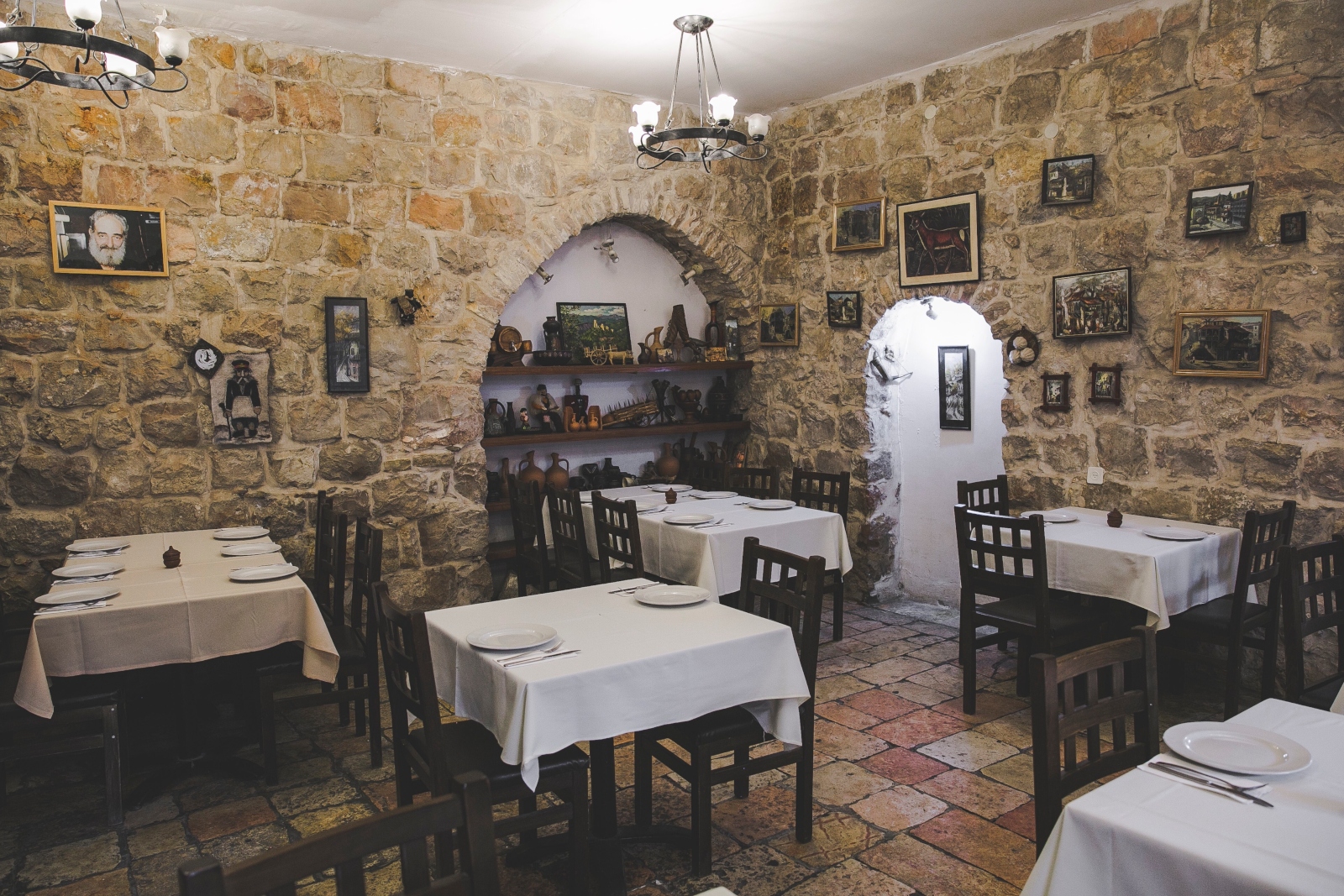 A very not kosher menu focuses on stews of beef and pork, large portions of dumplings, blintzes, and four types of khachapuri — a yeasted bread boat containing cheese and a fried egg — filled with a variety of Georgian cheeses.

Appetizers like pickled forest mushrooms; red lobio (spicy beans with ground walnuts and herbs); and chicken in walnut sauce are the perfect snack to enjoy alongside the house red wine, as you take in the Georgian folk singers who serenade diners. 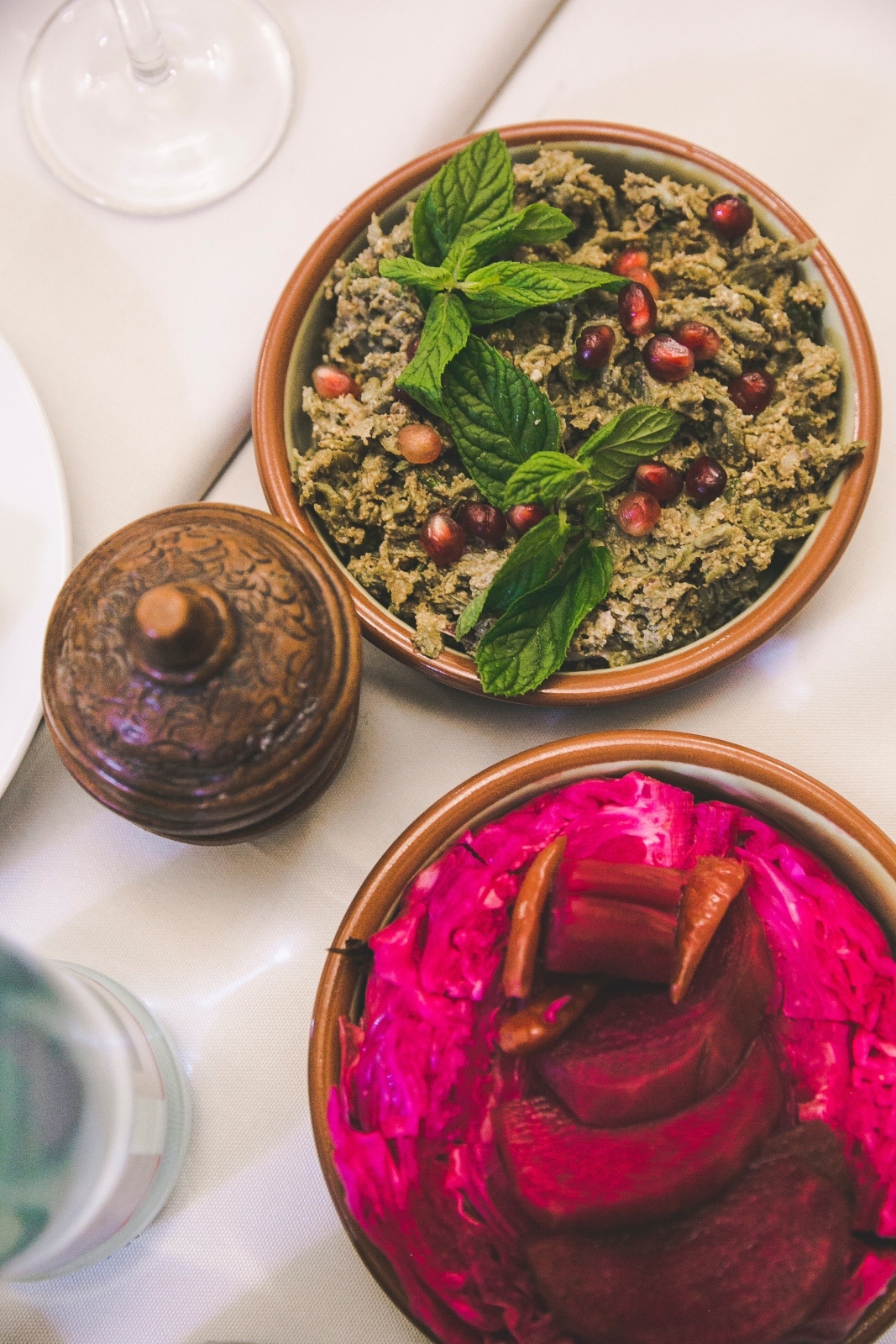 Named after the most popular of Georgian dishes — the great khachapuri — Hachapuria was one of the first restaurants on the Machane Yehuda scene back in 2009.

Chef and owner Tango Shavit, who pulls handmade traditional pastries hot out of the oven for diners, learned the secret behind Georgian cuisine from his Georgian mother.

Fillings like salty Georgian cheese; cheese and spinach; mashed potatoes with sautéed onions; and spicy beans with onions are served with a cup of sweet tea and accompanied by market-fresh chopped salad (reminiscent of a Greek salad) topped with cilantro.

Vegetable patés made from beets, spinach, eggplant, and walnuts make for a casual dining experience to rival a stop at your favorite pizzeria or burekas shop for a hot fresh lunch after a tiring shopping trip to the outdoor market.

At the junction of Kiryat Ata on the outskirts of Haifa, Maya’s Khchapuri is a mix of a fast-food joint and a traditional bakery and catering service.

The Georgian pastries and savory baked goods made by owner Maya Mor wait in the display case to be snapped up by hungry diners.

Also offering vegan options, such as khachapuri made with cashew cheese, as well as potato, bean and sweet apple pastries, Maya is equally known for her delicious vegetarian cheese and spinach dumplings, sweet cheese and cherry blintzes, and four types of khachapuri, each made with its own traditional Georgian dough. 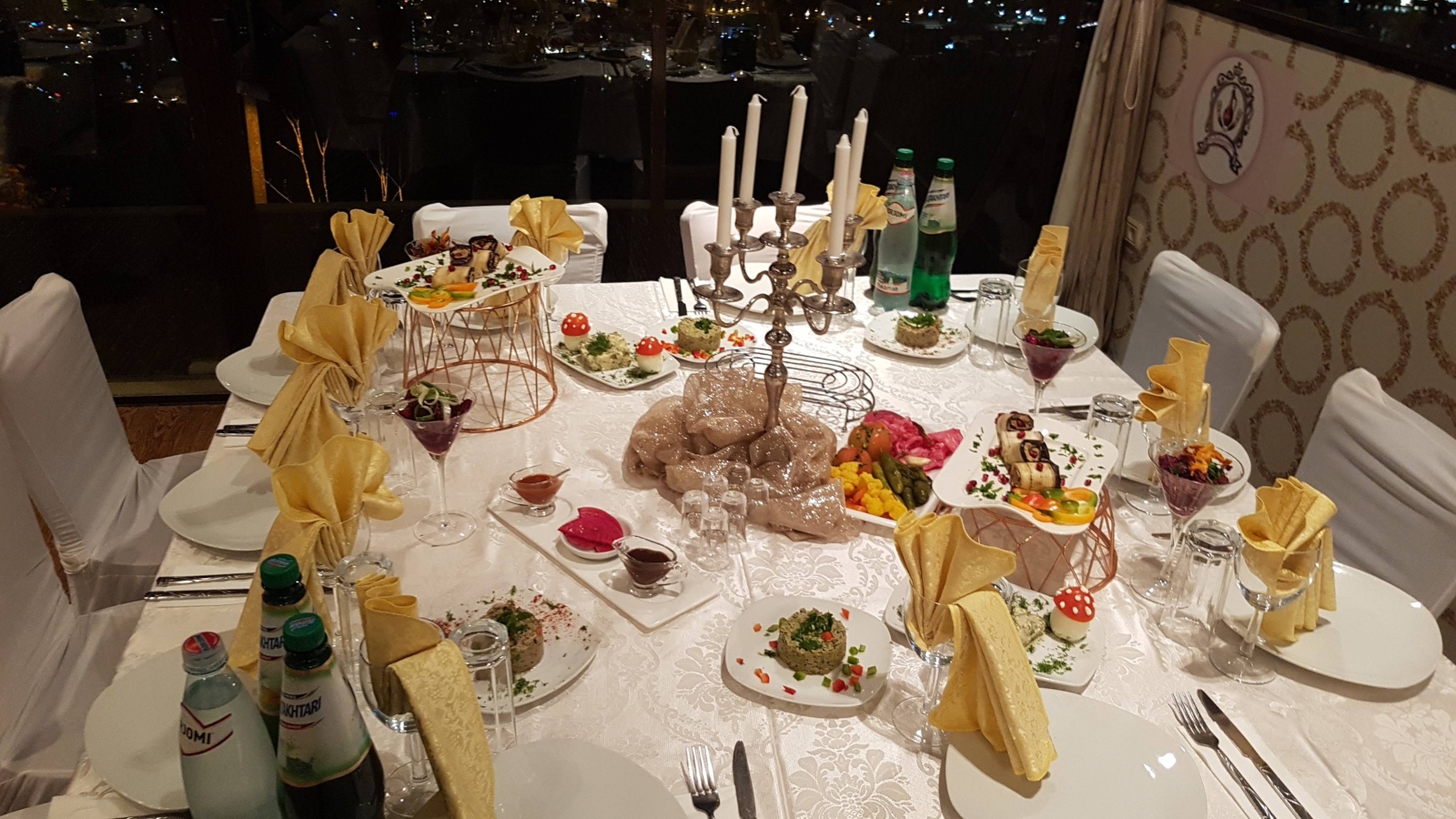 A table setting at Georgia restaurant in Haifa. Photo: courtesy

Georgia is set on Yefe Nof Street in Haifa with an expansive view of the Mediterranean bay below. But the very Israeli view shouldn’t fool you — once you sit, you are in Georgian territory, at least for the duration of your meal. 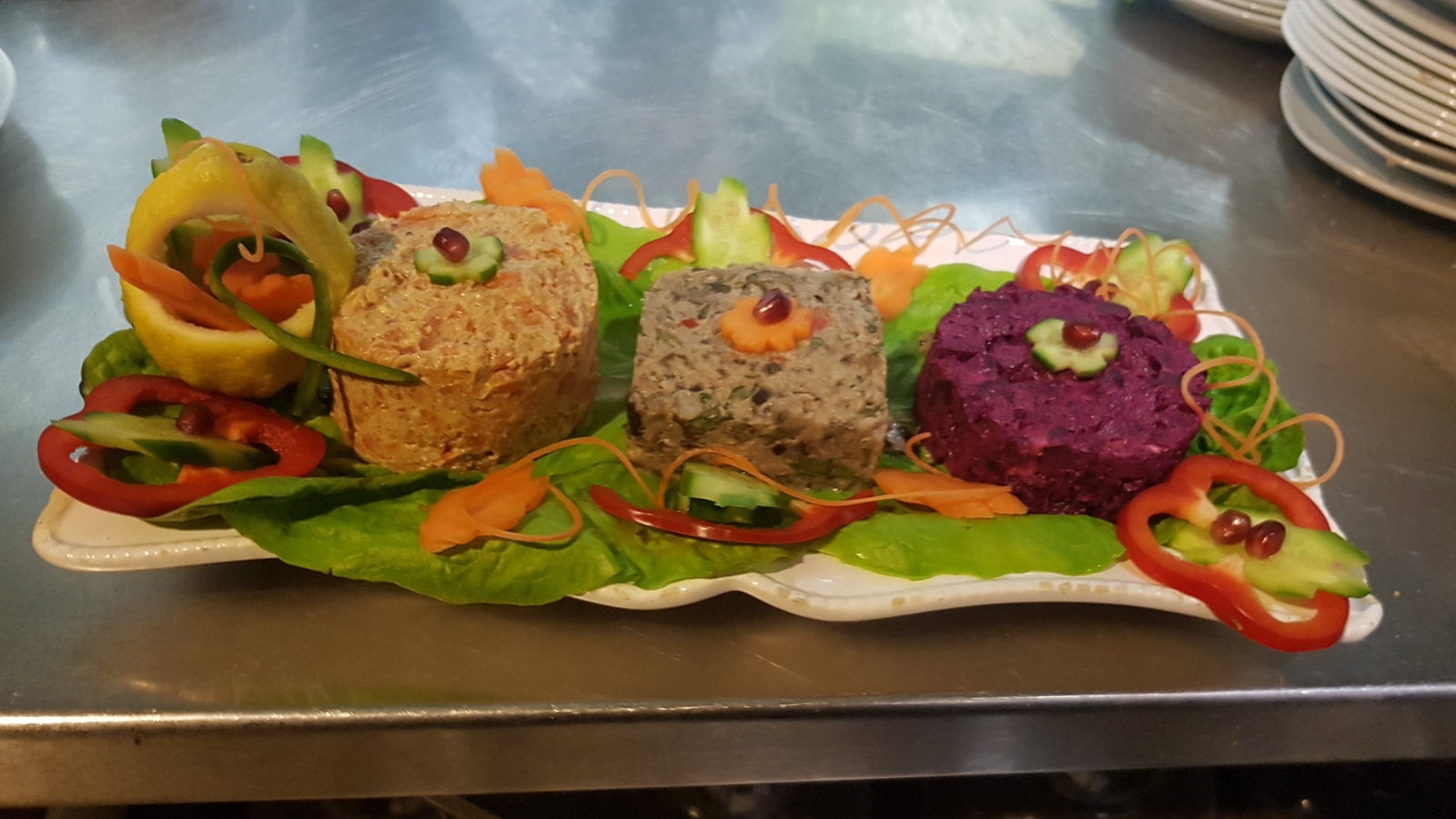 A trio of pkhali (vegetable patés with walnuts) at Georgia restaurant in Haifa. Photo: courtesy

A white-tablecloth experience with a sense of warm Georgian hospitality, intimate atmosphere and attentive service, menu items include deep-fried chebureki stuffed with the restaurant’s signature beef filling; lamb and chicken kebabs with special Georgian seasoning, served with a garnish of onion and pomegranate seeds; and beef-and-bean stew.

All make great precursors to desserts like walnut strudel and churchkhela, a traditional chewy candy made from grape juice and walnuts, hung from a string. 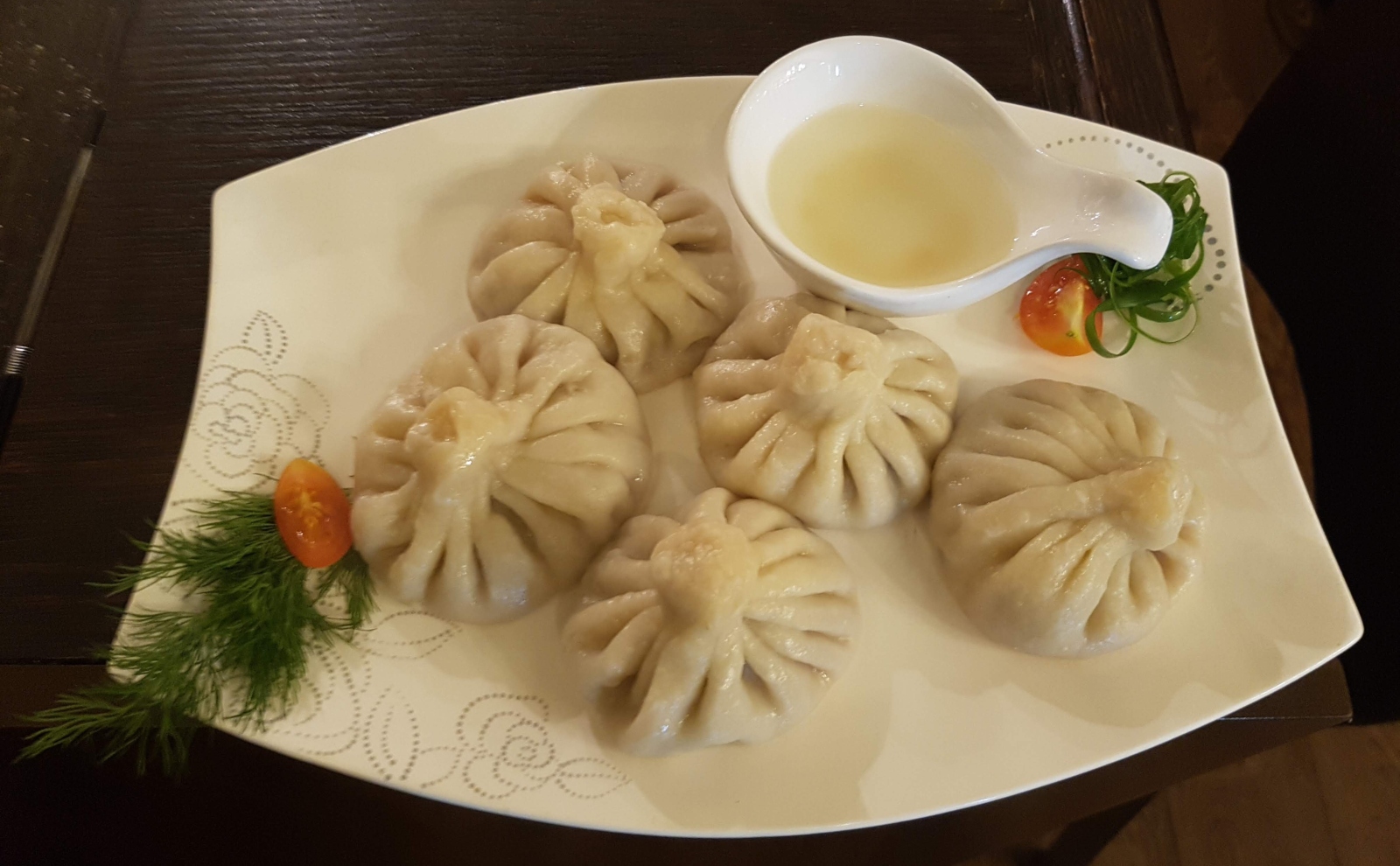 Meaning “mother” in Georgian, Deda offers a fusion of Israeli and Georgian cuisine made to please the modern Israeli palate.

Other traditional dishes found here are satsivi (a chicken leg in walnut sauce and almond oil), beet pkhali (a paté of minced beet with walnut, garlic and herbs), lahmajo (baked veal-stuffed flatbread) and a grilled-meat platter for four, served with the restaurant’s signature crispy herbed potatoes.

Décor is warm and homey, with seating that lends the feeling of grandma’s kitchen table — family photos hanging on patterned wallpaper — while the wood stove and old-fashioned upholstered chairs mirror the old country.

Food served on traditional china plates include salads like Vasis Tulma (chard leaves stuffed with rice, cooked in a pomegranate sauce); Georgian bellini pancakes filled with sautéed onion; and house sausages with Georgian seasoning. The adjacent Racha Bar is an all-night party spot that serves modern cocktails as well as chacha –– a Georgian spirit made in-house. 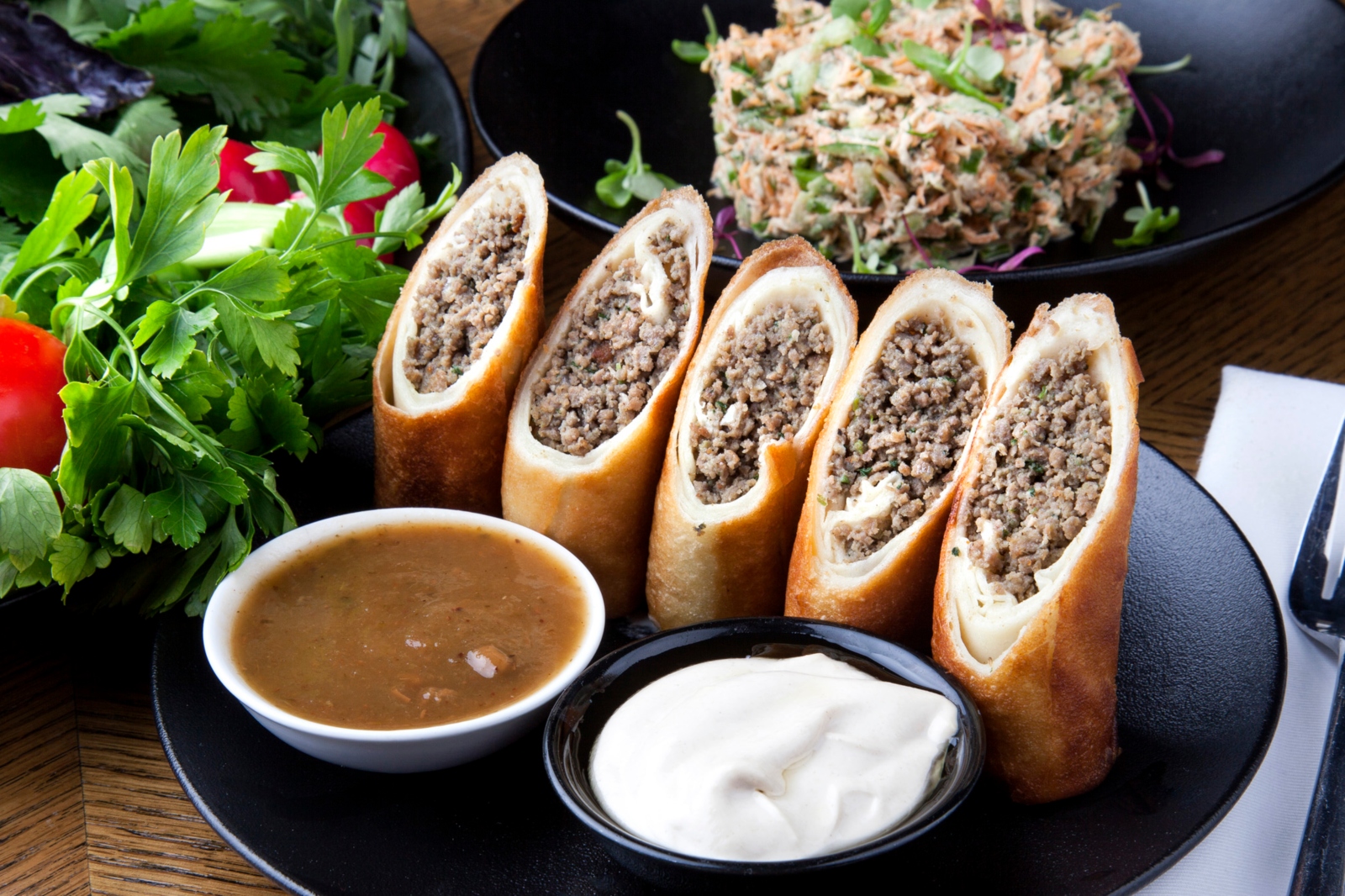 Founded by Georgian-Israeli singer and cultural icon Moris Ganeshvili, Kinto (Georgian for the concept of “work hard, play hard”) is a restaurant that brings an heir of grandeur to Tel Aviv.

You can enjoy such dishes as homemade pickles, shoti tabun bread, lambchops and stuffed grape leaves. Just keep watch for any boisterous dancing that could break out at any moment, and of course leave room for the Napoleon of puff pastry and pareve cream that is served for dessert. A trendy eatery near Jaffa’s flea market, Tash and Tasha marries the old world with a new gourmet dining experience. Small dishes served on decorative Georgian china, and infused with fresh herbs, are served in a fitting Ottoman-era stone building.

The menu contains all the traditional Georgian dishes, from pakhali vegetable-and-walnut paté to lubio spicy red-and-white bean dip served with warm lavash bread; to kebabs and all the required baked goods such as khortziani –– a pastry filled with ground beef, served with tkemali (a sauce made from green plums) — alongside modern Israeli desserts and cocktails such as “Compote Shovav” (troublemaker punch) which includes Chaha (a Georgian hard liquor), Russian Standard vodka and homemade natural fruit punch.

Opened in 2017 with the intention to share the world of Georgian food and culture with Beersheva residents, Tbilisi is named proudly after Georgia’s capital city.

Operating like an Israeli grilled-meats restaurant, here you’ll find skewers of foie gras and ribeye steak as well as blintzes and chebureki fried beef pastries to go with your assortment of regional salads and hummus. A modern casual atmosphere decorated with ceramics and other tchotchkes from the old country, it is a good place for hunkering down for a good meat-based meal.

Petra is located along the city’s Arches beachfront, and the dishes reflect the location. Taking a non-kosher stab at the cuisine, Petra’s chef makes khinkali dumplings filled with chopped shrimp and calamari (as well as many other shellfish dishes), while still serving plenty of traditional Georgian dishes and pastries like chebureki (fried cheese pockets), and welcome additions such as the house-smoked fish and Balkan salads platters, in addition to typical Israeli restaurant fare like pastas and schnitzels.

A good place to dip your toe into the world of Georgian dining, before you treat yourself to a dip in the Mediterranean.