7 buildings in Israel that will stop you in your tracks

The austere “less is more” mantra of architecture in the first half of the 20th century gave way to the postmodern “less is bore” approach that said buildings could be both functional and artistic, even incorporating elements of irony and asymmetry.

While “less is more” defines the famous White City Bauhaus buildings that earned Tel Aviv a UNESCO World Heritage Site designation, the “less is bore” approach in Tel Aviv and other Israeli locales led to structures that have people stopping in their tracks to gawk, grin or gasp.

Are these buildings beautiful or baffling, or both? That’s up to you. Beauty is in the eye of the beholder. Let us know what you think about these examples of daring Israeli architecture. 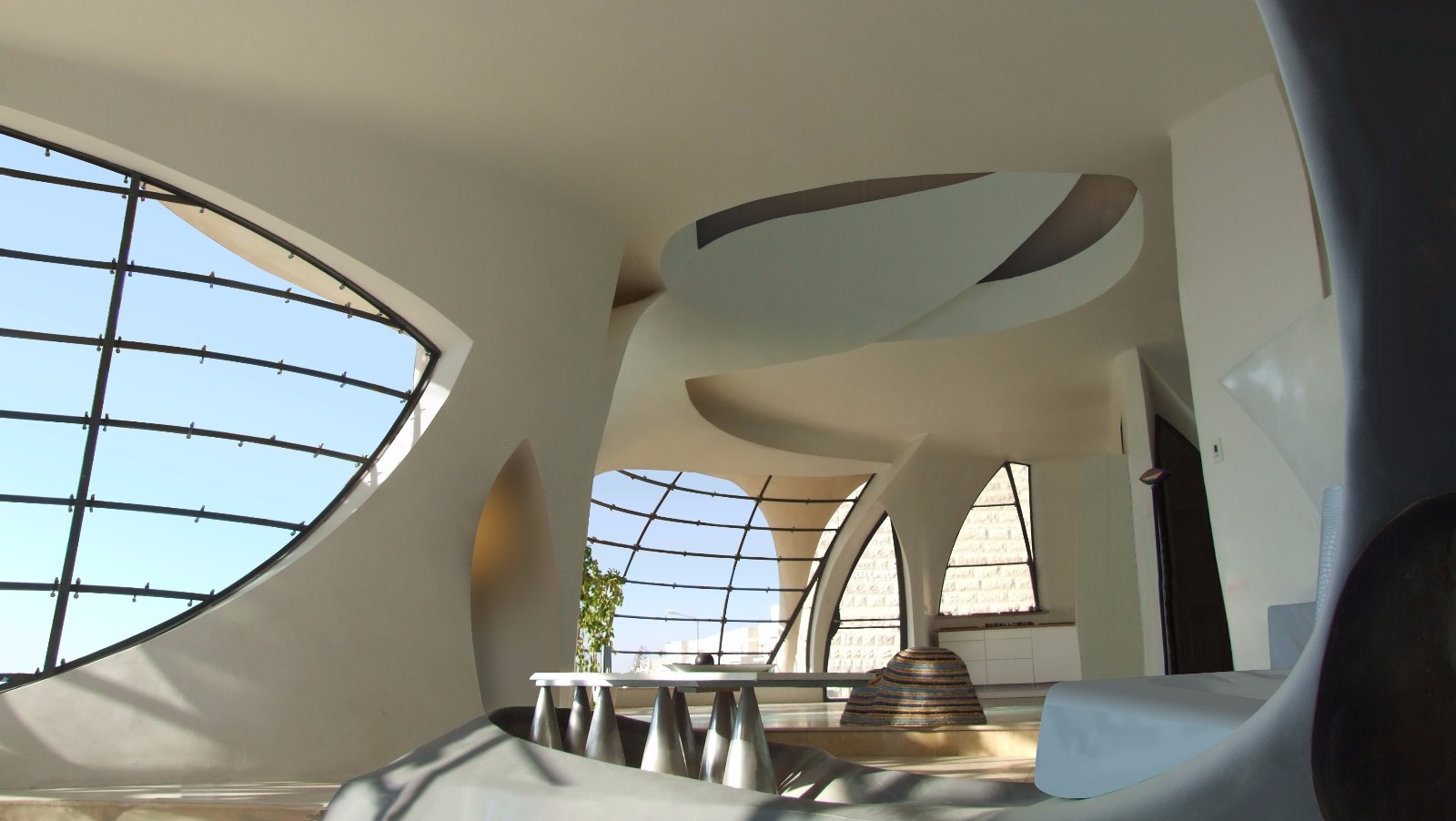 An interior view of the Bubble House in Neve Daniel. Photo courtesy of Ephraim Henry Pavie

French-born architect and interior designer Ephraim Henry Pavie planned this 10-room, four-story house for his own family in 2007. It’s not completely finished because he’s always experimenting with the design.

“I’ve been doing this kind of shape since I started learning architecture in Paris,” Pavie says. “I don’t see why I should be obliged to use geometrical shapes which have nothing in common with nature’s system of shapes. The separation between inside and outside should integrate the life of the outside, and I think curves are the best way to make an envelope for a family.”

His teachers warned that if he wanted to graduate he’d have to sketch rectangular buildings like everyone else. But once his diploma was safely in hand, Pavie and a few friends built two feng shui-inspired bubble houses in Paris in 1974.

“The technical approach we developed allowed us to build free shapes. The structure is flexible and when I’m sure everything fits the way it should fit I spray concrete on it,” says Pavie, who has also built bubble houses in Miami and on the French Riviera and is completing another one in Israel. Every component, including the windows, is custom made on site. 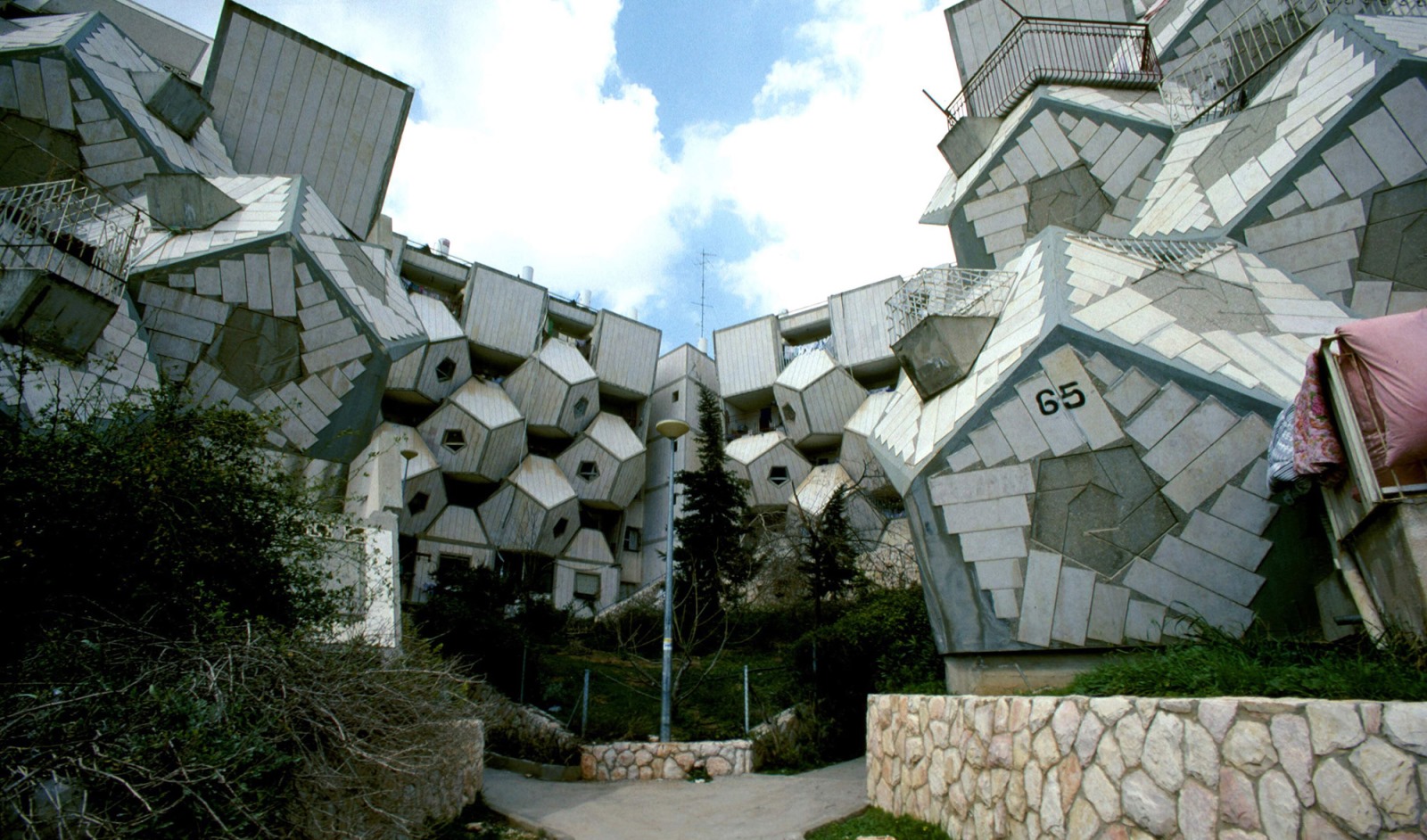 “The general plan of the Ramot Housing is reminiscent of the palm of an open hand — its five fingers are retaining walls ‘supporting’ the slope of the hill,” explained Hecker. “Each ‘finger’ is composed again of five boomerang-like buildings assembled in such a way as to create interior courtyards [transected] by pedestrian paths reminiscent of the Old City of Jerusalem.”

Similar geometry is seen in Hecker’s Synagogue in the Negev, where three types of polyhedral units comprise the truncated octahedron building. 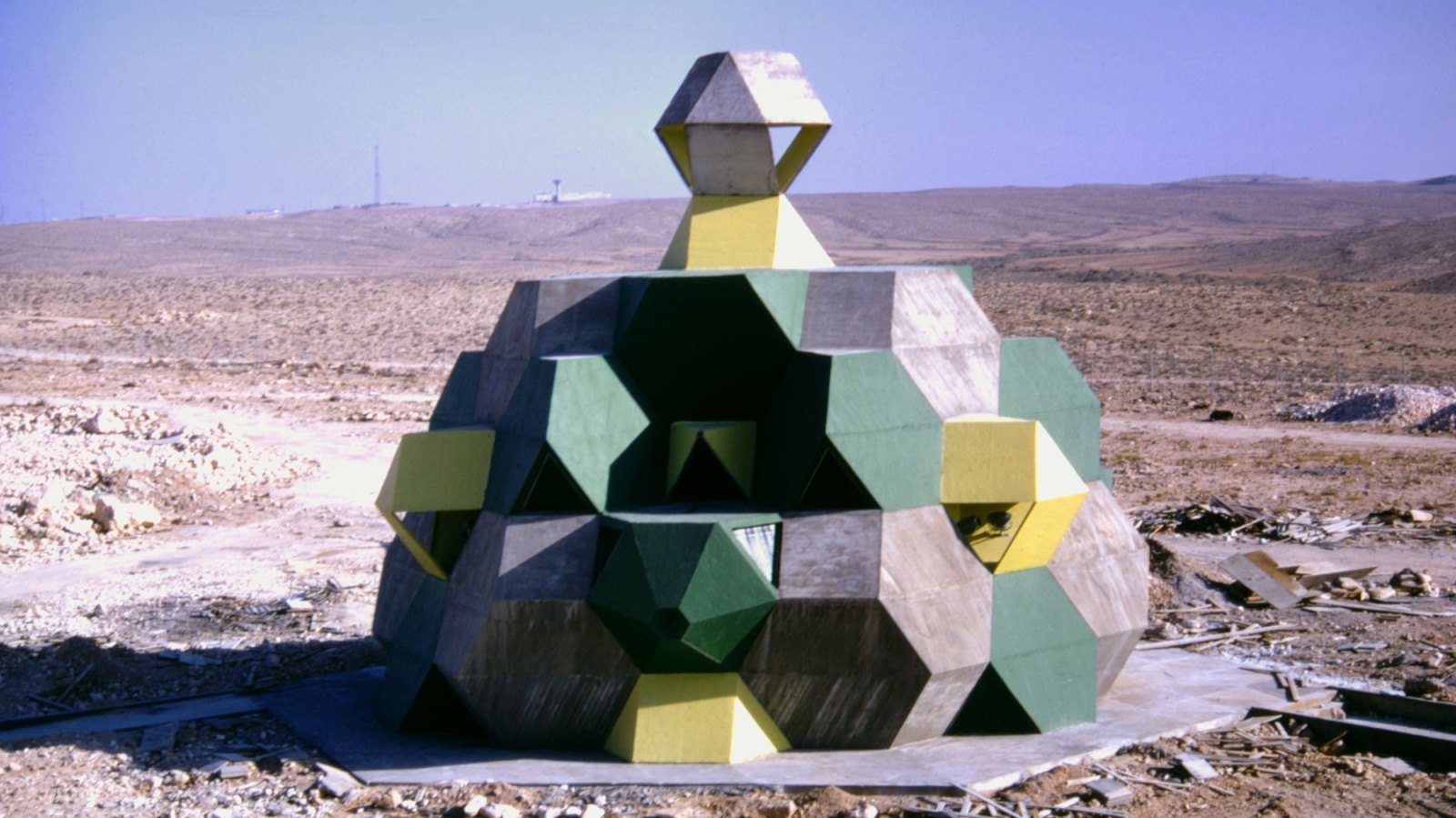 Synagogue in the Negev. Photo via zvihecker.com/projects 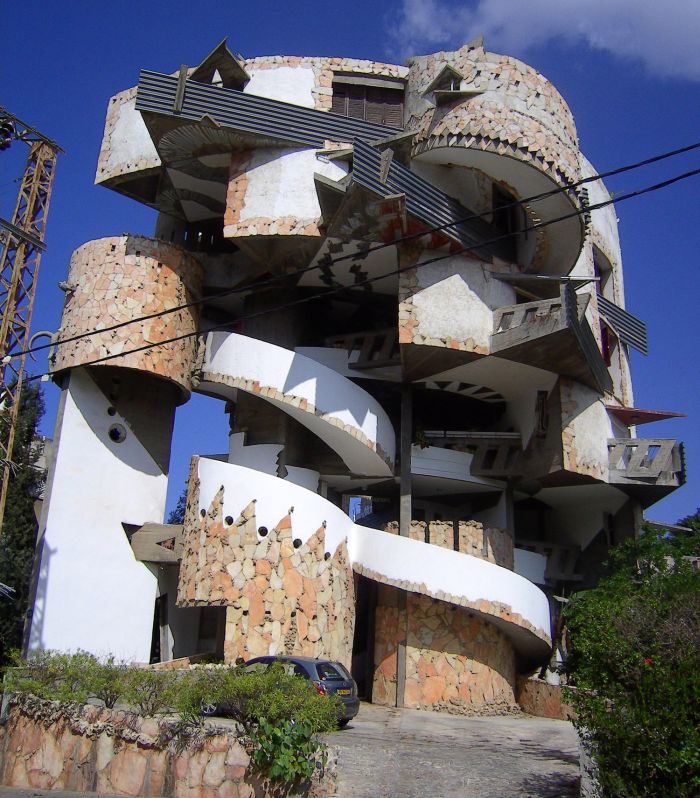 The internationally prolific Zvi Hecker also designed this twisty house, which took five years to build, from 1984 to 1989. The facade of plaster, pink glass, stone fragments, corrugated tin and mirrors reflect the interior courtyard and the surroundings.

Hecker describes the Spiral House, which won an architecture award in 1999, as a modern Tower of Babel. “It is a work of incomplete precision. Because it is so precise it can’t be really finished… The Spiral’s incompleteness is also its poetry because poetry is the most precise expression of our need for precision. Expressive as it is, the Spiral can’t be fully understood. It speaks to many languages at one and the same time.” 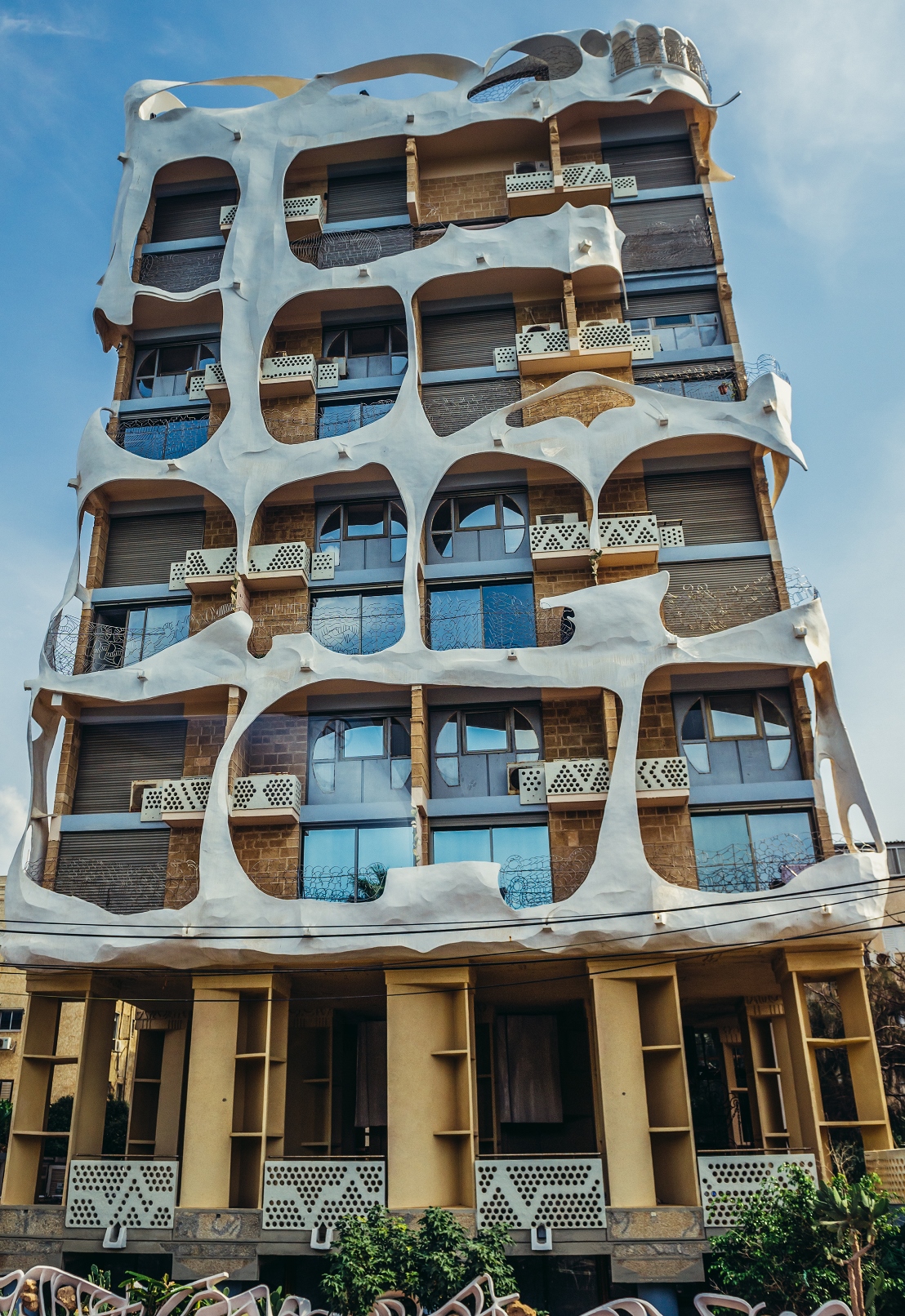 The front of the “Crazy House,” Tel Aviv. Photo by Fotokon/Shutterstock.com

The side of the building that faces the beach is embedded with gravel, shells, sand, natural wood and plants. The front-facing side features a metal-and-concrete fresco.

The architect has described these opposite sides as “east and west, masculine and feminine, mineral and natural.”

Due to its prime location along Hayarkon Street in north-central Tel Aviv, the Crazy House elicits lots of smiles and picture-taking from visitors to Tel Aviv. 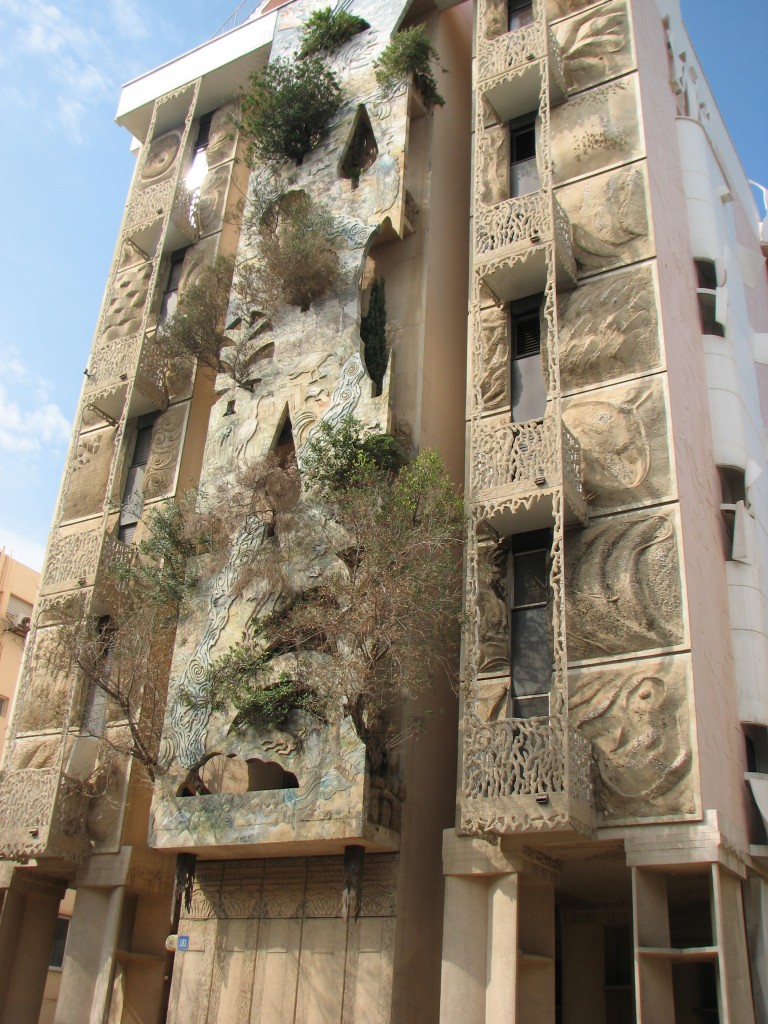 Back view of the “Crazy House.” Photo via attractions-in-israel.com 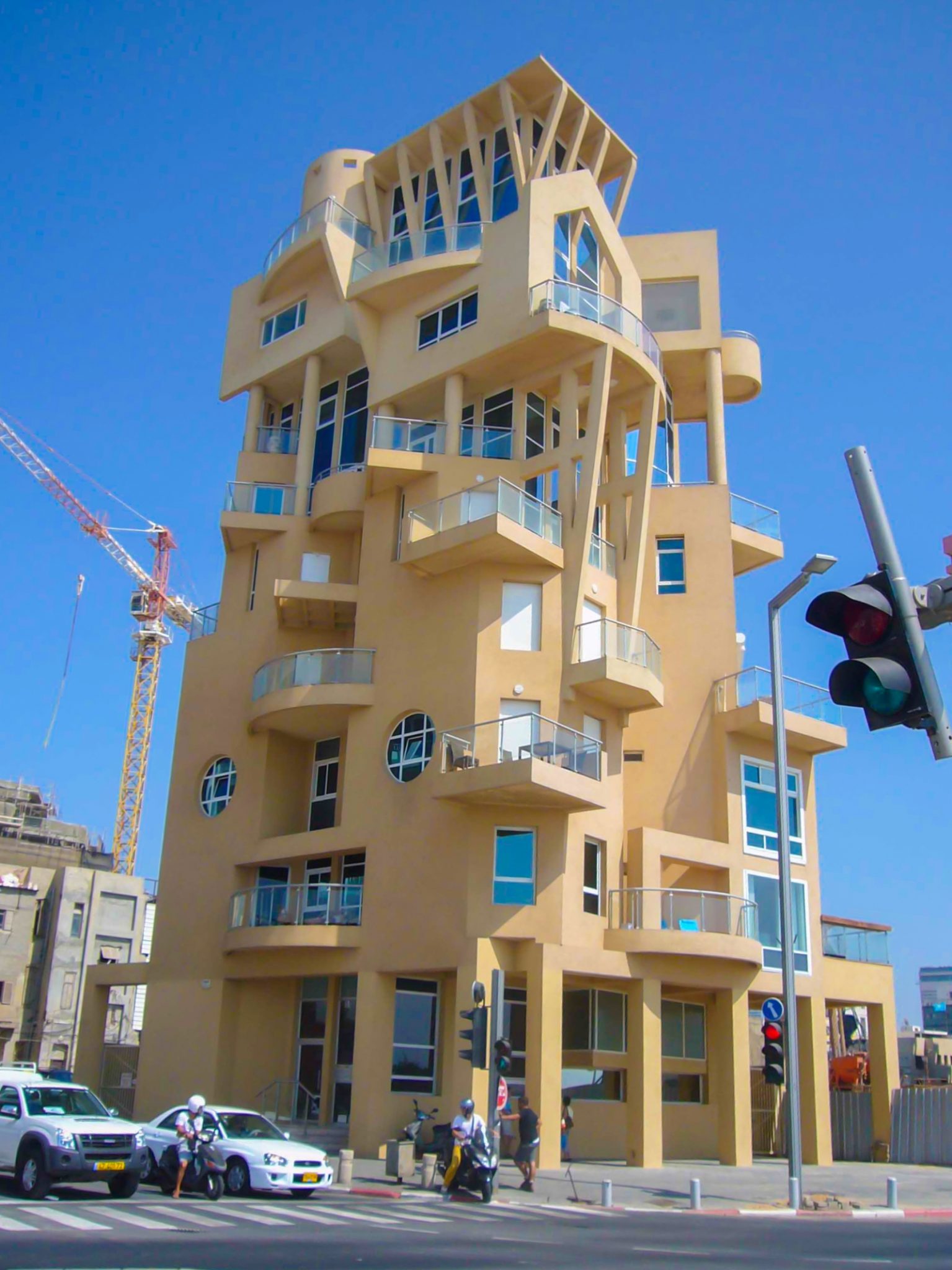 House on the Boardwalk at 2 Trumpeldor Street, Tel Aviv. Photo via happyintlv.net

Tel Aviv University Prof. Tzvi Harel, the good-natured architect who designed this post-modernist gravity-defying seaside apartment house, says that he is “proud of being insulted about it. I believe humor and criticism in architecture is very important.”

The four-story building was never meant to be more than imaginary. Harel sketched it for a 1980s newspaper column on the renaissance of Tel Aviv culture and art. 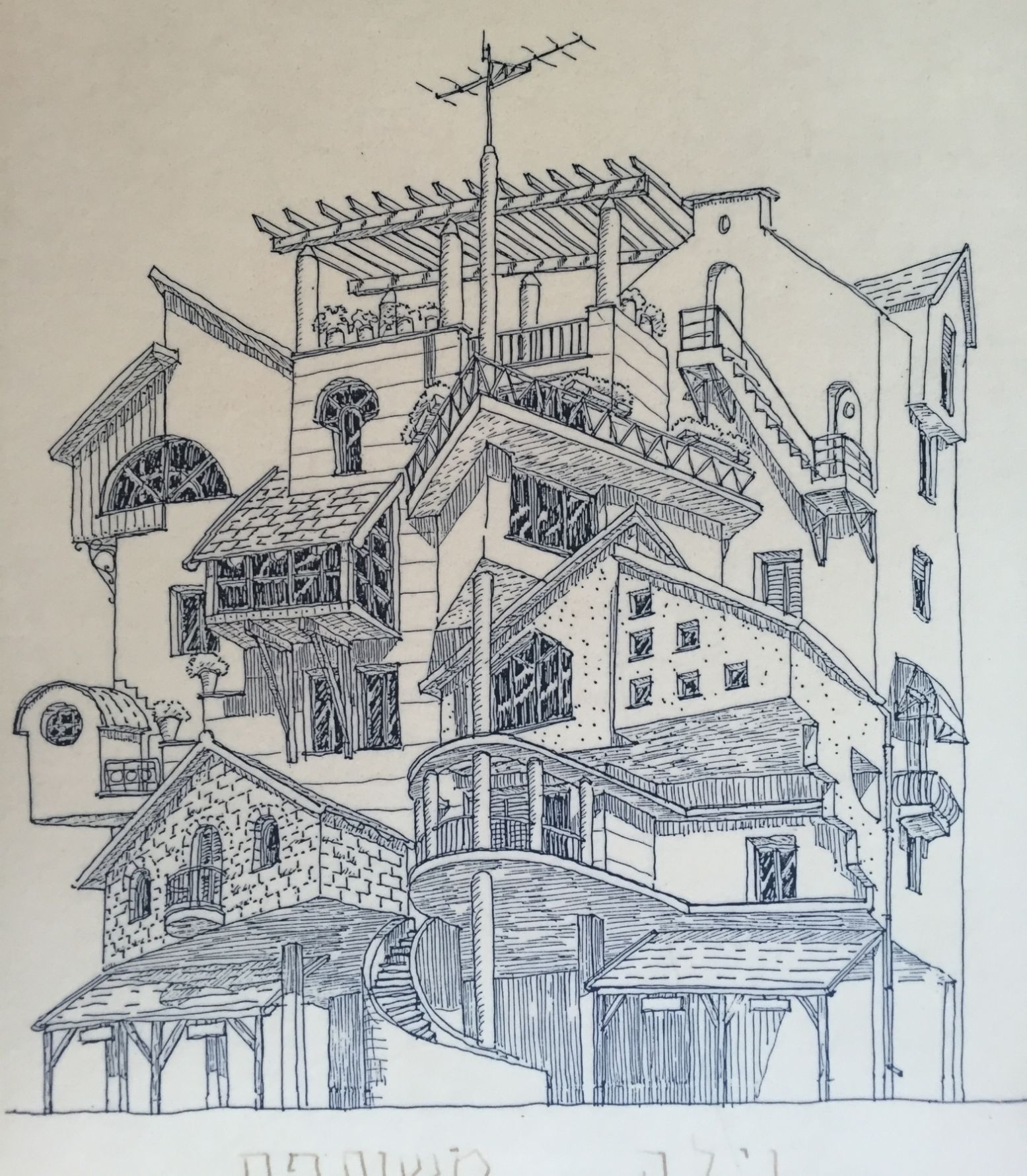 Tzvi Harel’s original sketch of what became the House on the Boardwalk. Photo: courtesy

Local entrepreneur Avraham Piltz loved the oddball design and brought it to life, though he died before the house was completed in the mid-1990s.

“The idea was that since it was on the shore of Tel Aviv, which in those days was quite neglected, you could be an exhibitionist and expose yourself playfully in front of the sea,” Harel says, pointing out that every room in each of the seven apartments has a sea view. 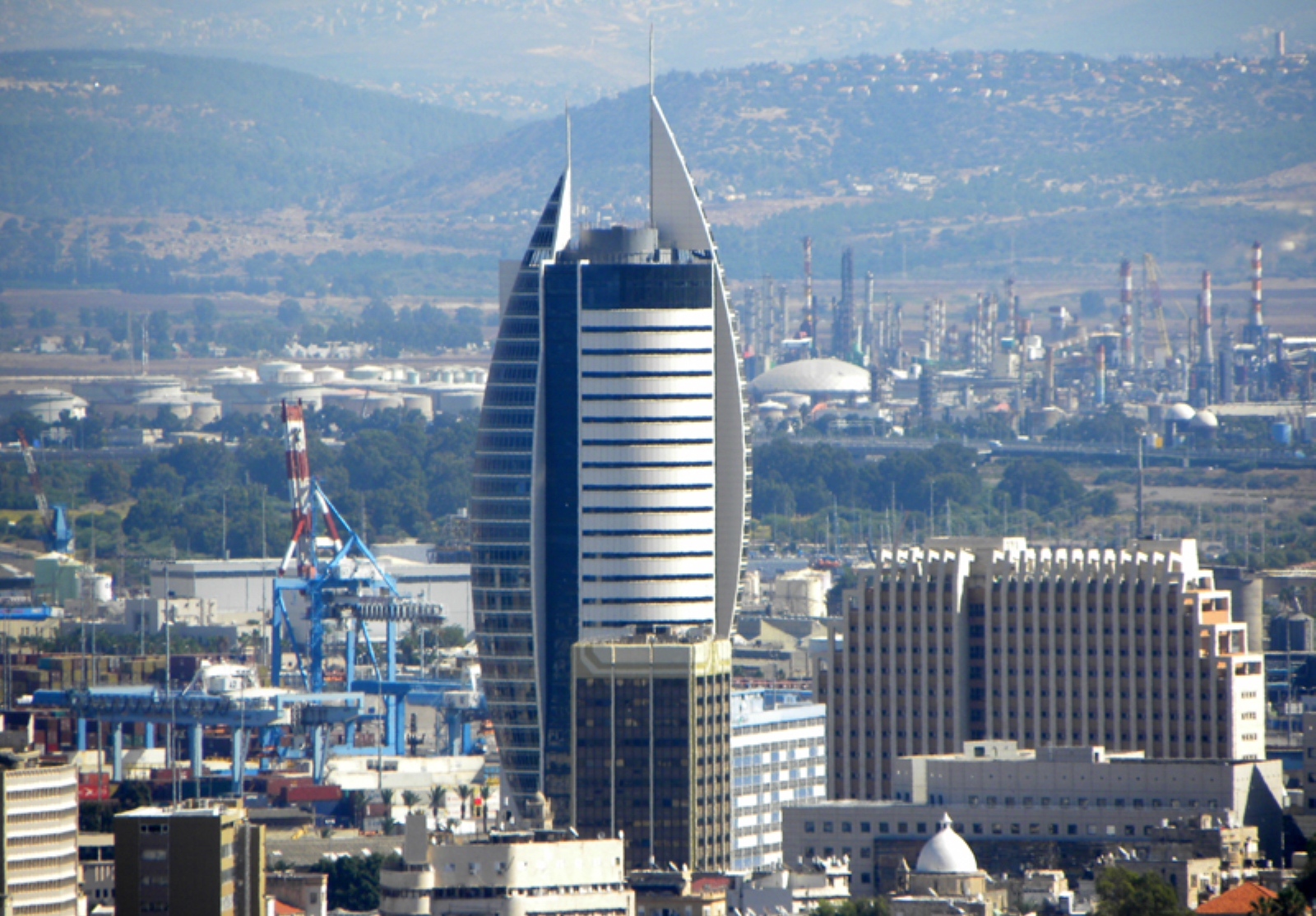 This government office building is meant to evoke a huge boat with inflated sails. Locals call it “The Rocket” because it looks like it’s ready to launch into outer space. Designed by Dina Ammar, the tower was completed on February 28, 2002 and made Emporis.com’s top 10 list of best skyscrapers that year.

The Sail Tower, with 29 above-ground and three below-ground stories, is covered in curtain walls of aluminum and glass. Counting the antennas, it stands at 152.5 meters (500 feet) tall, making it the highest skyscraper in Haifa. In the lobby, 10 steel arcs soar above mosaics depicting Haifa’s history, including a city map from 1773 and a painting of Mount Carmel from 1667. 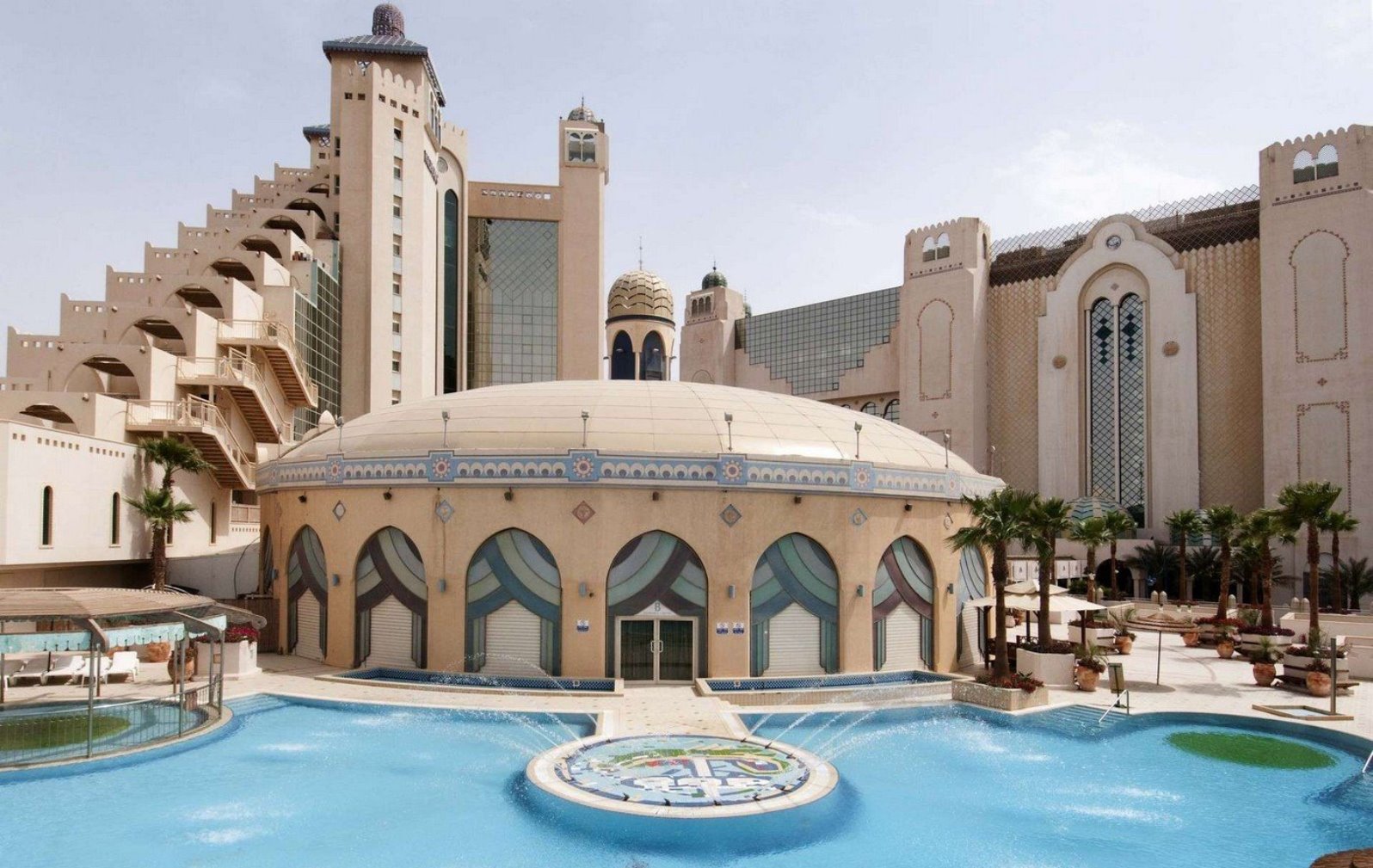 The Herods Eilat Hotels are the brainchild of architect/entrepreneur/sailor Yoav Igra. Born and educated in Jerusalem, Igra earned a degree in architecture in Canada and returned to Israel in 1989 to create Israel’s first themed hotel resort similar to those in Las Vegas.

The $140 million project is distinguished by historic-looking arches, towers, domes and columns symbolizing seven cultures that had great influence on the region: the Egyptians, Nabateans, Greeks, Romans, Ayyubids, British and Israelis. Igra oversaw each detail down to the doorknobs and structural fittings.

The complex of three hotels (Herods Palace for families, Herods Boutique for business travelers and Herods Vitalis spa hotel) opened in 1999. Igra lives in the Palace and continues to update and tweak his creation. 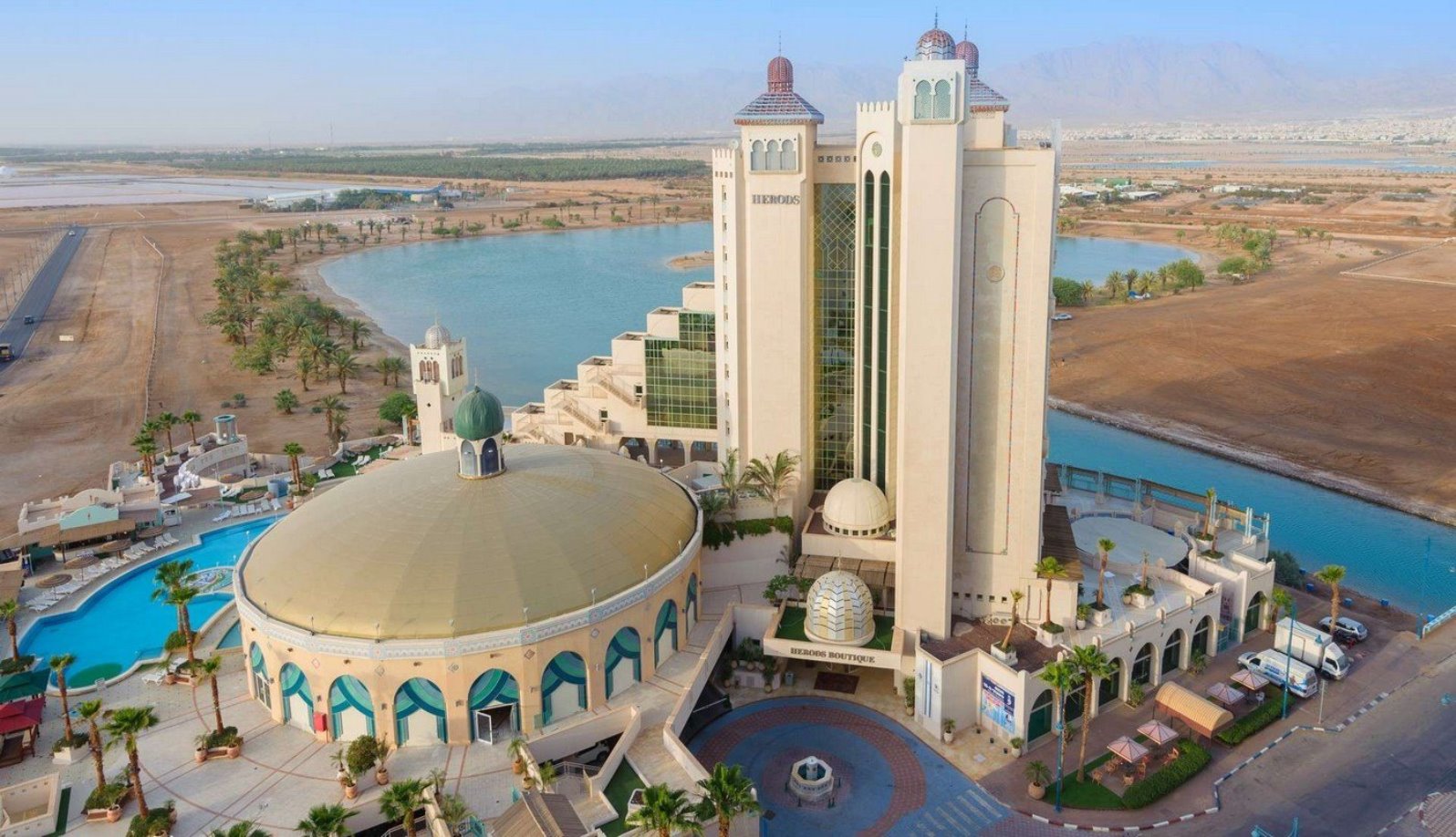