Home Tourism 9 top sites to see in the Golan Heights

9 top sites to see in the Golan Heights

The Golan Heights in the far north of Israel is often overlooked because it’s just a wee bit off the beaten track for many tourists. But if you have the time, this amazing part of the world has some truly wonderful sites and natural marvels that may just knock your socks off – and also have you wishing you could stay longer!

The Banias Waterfall is one of Israel’s true northern delights, and is a very popular spot for locals and tourists alike, especially during the winter when it’s at its full flow.

Fed by the melting snow of Israel’s tallest mountain, Mount Hermon, Israel’s best waterfall is also home to some great treks, with trails passing Roman and Crusader remains and yummy Druze pita pit-stops. The Banias is also known as a Christian pilgrimage site, as Jesus is believed to have sat here with his disciples to ask them their thoughts on what the people saw in him and his teachings.

One of Israel’s top locations, you decide if you want to sit on the banks, go into the water, or hunt down those Druze pitas! To get there, head east of Kibbutz Snir on Road 99, and you’ll hit the waterfall site. There is an entrance fee of 27 shekels/14 shekels, which includes access to the whole Banias Nature Reserve. 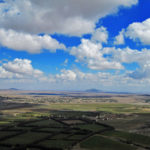 The stunning views from Mount Bental are what it’s all about. Plus there’s the historic side for those curious about the Arab-Israeli conflict and military battles.

Mount Bental is actually one of two craters of an extinct volcano and stands 1,171 meters above sea level, hence the amazing views (yes, right into Syria). The old army bunkers are great for the kids to scamper around, while if you get hungry, there’s the cute Kofi Anan Cafe to chill out in. Great for all the family. 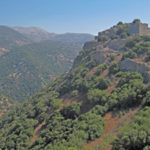 If medieval fortresses are your pleasure, then Nimrod Fortress is one not to miss.

Head to the far northern Golan Heights for this one (there’s also a special visitors’ ticket that also gives access to the Banias, see above), the fortress is actually located on the lower slopes of Mount Hermon. After much restoration work, you can explore this medieval gem dating back to 1229. Great fun for all the family, though those under five and those a bit physically challenged might find it a bit tricky to navigate the many stairwells and rugged paths.

The Gamla National Park is highly recommended for its amazing history and architecture, plus amazing views and natural scenery.

Gamla is actually the location of an ancient Jewish city that some refer to as the Masada of the North, because of the similar fate that befell its citizens; when the Romans besieged and then took control of the city, the Gamla inhabitants committed mass suicide. The ruins of Gamla are still accessible (up a steep path) or can be viewed from an observatory point, from which you can also see the 150 foot Gamla waterfall (also accessible by foot).

Israeli wine has come a long way in the last few years, and the Golan Heights Winery is one at the forefront of the wine scene in Israel (they were actually voted 2012 winners of the New World Winery award).

Located in Katzrin, you can visit the winery’s visitor center for a great tour of the winemaking process and get to taste some of their four main brands: Yarden, Gamla, Mount Hermon and Golan. There are actually a number of different tours available, including an amazing ATV drive through the vineyards. 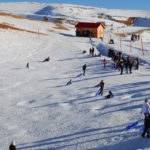 Hugely popular during the annual snow flurries that hit the Golan Heights, Mount Hermon is Israel’s tallest mountain and the only place you’ll be guaranteed (almost 100%!) of some snow each winter.

If you’re a snow freak, be aware that when the snow hits (typically in January-February), so do the traffic jams up to the Hermon. But if you get there early enough, you can grab a slice of skiing or snowboarding action easily enough. It might amaze you, but there are 28 miles of ski runs, including two Olympic standard runs! And if you’re not an extreme sporty type, just enjoy the amazing views, both in winter and summer.

El Rom Kibbutz is the place to go to get yourself acquainted with the history and significance of the Golan.

El Rom was actually wiped out during a big tank battle during the Yom Kippur War in 1973, but was quickly re-established and has since become a site where visitors can watch a true film depicting this battle (called OZ 77), and the inspirational Israeli comeback over the Syrian forces. Also head across the street after watching the movie to take a look at the battlefield, known as the Valley of Tears.

Thanks to the Golan’s rich and fertile soil, the area is abundant with fruit orchards. And one of the most fun ways to experience the Golan Heights with the family is to go fruit picking! Expect to find apples, cherries and various berries throughout the year!

The main sites for fruit picking in the Golan include Odem and Ein Zivan, with cherry picking in the early summer proving one of the more popular options.

The Facebook and Twitter of the Middle East, this site became something of a tourist site due to its location and fame for symbolizing the pain of innocent bystanders in the Middle East conflict…

Located at the foot of Mount Hermon, this hill once acted as the main means of communication between divided families as they shouted across the valley to each other…though as the Internet and mobile phones reach even these far northern parts of Israel, the need to shout greetings and messages has fast diminished, except for special occasions when families want to physically see each other.