Think of the Israeli desert blooming, and you might picture juicy Jaffa oranges, prickly Sabra cactus fruit, luscious tomatoes or hothouse flowers that get shipped to a waiting world market.

But the miracle of turning the desert green extends beyond agriculture. Despite chronic water shortages, Israel’s soil supports meticulously landscaped and riotously colorful public gardens. Many of these sites also house botanical and agricultural research projects.

The approach of autumn is a perfect time to put on your walking shoes and explore the public gardens dotting the Holy Land. 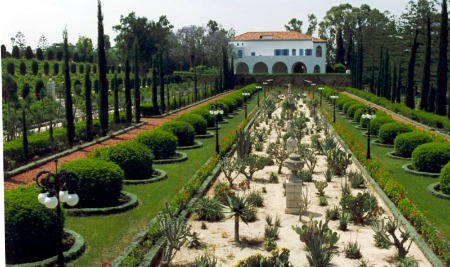 The spectacularly maintained Baha’i Gardens in Haifa and in Acco (Acre) welcome more than half a million visitors every year. Entrance and tours are free to these two gardens, located about 10 miles apart and designated UNESCO World Heritage sites as holy places and pilgrimage destinations for followers of the Baha’i Faith.

The main Haifa garden consists of 19 landscaped terraces, extending one kilometer up the northern slope of Mount Carmel and overlooking Haifa Bay. The 450 plant species, most of them native to the region, were chosen for their color, height, hardiness and ability to survive Israel’s desert climate.

The smaller Acre garden surrounds the mansion where the prophet-founder of the Bahai faith is believed to have resided during the final years of his life. The Acre garden will soon be expanded.

The two gardens are tended by 90 local workers from a variety of ethnic and religious communities, as well as Baha’i volunteers from overseas. 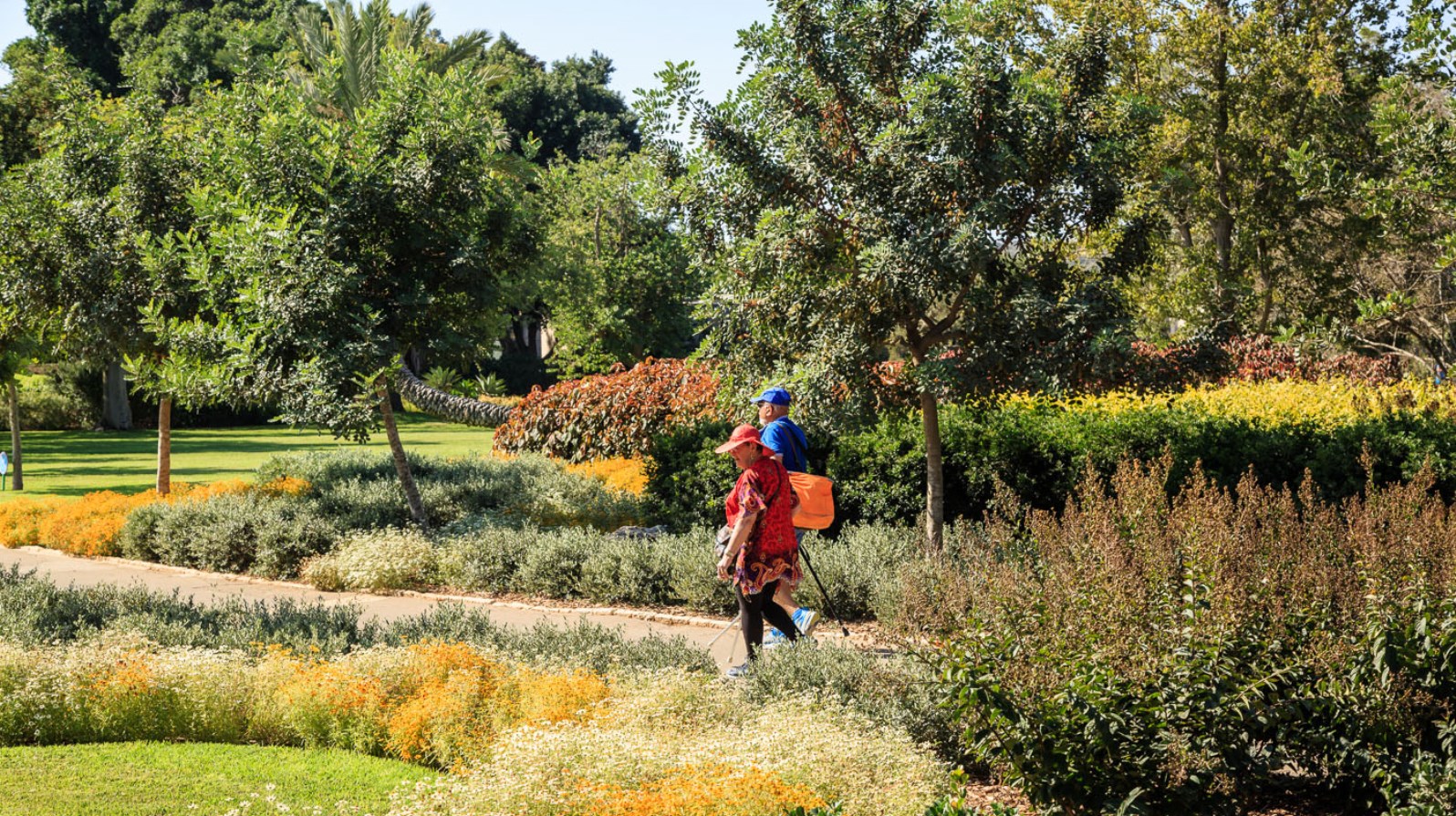 Situated at the southern end of Mount Carmel, between Zichron Ya’akov and Binyamina, Ramat Hanadiv is a memorial to Baron Edmond de Rothschild, a major benefactor of the modern state.

At the Memorial Gardens, there are wheelchair-accessible pathways among a combination of formal European and Mediterranean-style plantings, pine and cypress groves surrounding the crypt of the baron and his wife.

The Nature Park features circular hiking trails, observation points and remnants of ancient human settlement, as well as an acclimatization cage where birds of prey are prepared for release back into the wild. 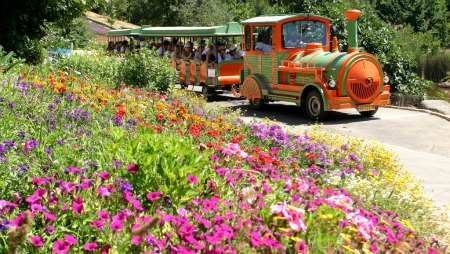 This 30-acre oasis on the Hebrew University’s Givat Ram campus houses about 10,000 species arranged according to geography, with sections for plants native to the Mediterranean region, Central and Southwest Asia, Australia, North America, Europe and Southern Africa. It also has a large collection of bonsai trees, a tropical conservatory and an herb and medicinal plant garden.

The Botanical Gardens host a yearly wine festival, and kids love the train ride that takes them through the garden to the lake with swans.

An interactive Children’s Discovery Path is planned, as well as a biodiversity education center at the tropical conservatory. An entrance fee is charged. 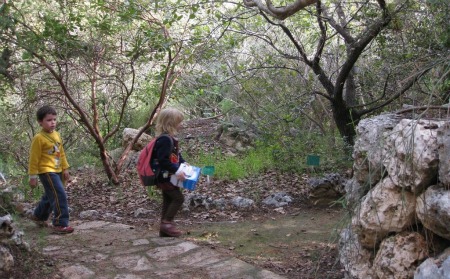 As an educational and research center, the university’s gardens annually serve thousands of schoolchildren, teachers, scholars, and amateur naturalists from Israel and abroad.

The site encompasses the Noah Naftulsky Ecological Garden; specialized gardens for economic and medicinal plants and endangered species; a Garden for the Blind; and the Daphna Carasso Garden of Tropical Plants — Israel’s largest collection of tropical plants — punctuated with greenhouses, flowerbeds, giant bird of paradise plants, orchids, coffee, vanilla and cacao along with thousands of exotic species and ornamentals.

The Sarah Racine Root Laboratory is designed to study the structure, physiology and reactions to various effects of roots and root systems. 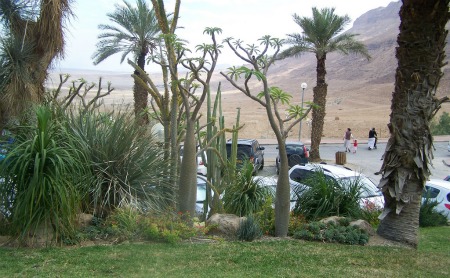 Founded in 1956 and covering 24.7 acres, this garden in the Judean Desert is home to more than 900 species of plants from five continents. The summer heat and the mild winters, along with the minerals found in the air, allow for particularly quick growth, which explains why some parts of the garden look like a thick jungle.

Olive, pomegranate and fig trees grow alongside tropical plants from Madagascar, while Australian plants sprout near local desert shrubbery such as the Apple of Sodom. The Scented Arugot area holds healing and fragrant spices, as well as biblical plants such as myrrh and frankincense. 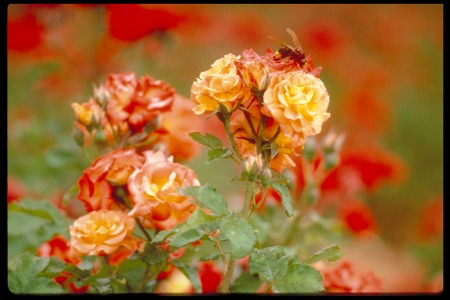 This 19-acre public garden in the government precinct of Givat Ram is located at the foot of the Israeli Supreme Court. Its 15,000 rose bushes represent more than 400 varieties, planted in sections representing their countries of origin.

There is an experimental section where new varieties of roses are tested to see if they can survive in Israel. The garden won an award for excellence in an international competition for rose gardens in 2003, and was named one of the 11 most beautiful rose gardens in the world. 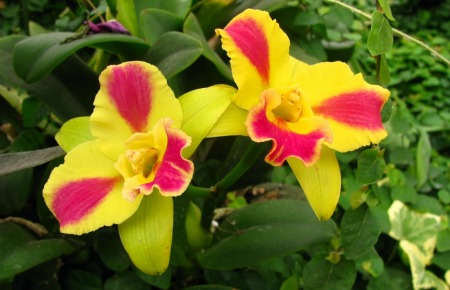 One of the sights at Utopia Orchid Park.

This biological garden in Kibbutz Bachan displays more than 20,000 orchids, some of them rare, in an indoor garden. The park also boasts a butterfly house, two plant mazes, a petting zoo, a musical fountain, and shady lawns covering about 10 acres in the Emek Hefer region between Hadera and Netanya.

The grounds include waterfalls, pools, fish, birds and tens of thousands of tropical plants, including carnivorous ones. The Butterfly Garden houses hundreds of butterflies and nourishing plants. You’ll encounter goats, spotted deer, sheep, peacocks and rabbits as you walk along. An entrance fee is charged.

Located halfway between Jerusalem and Tel Aviv, Neot Kedumim is a non-profit 620-acre biblical reserve that won an Israel Prize in 1994 as a model of restoration ecology.

You can see plants and trees, water and agricultural installations as they were thousands of years ago, with special areas for the seven species of the Land of Israel – olives, wheat, barley, figs, pomegranates, dates and grapes.

A botanical garden in a city that gets virtually no rain? Yes, right near the entrance to Eilat, spread over wild desert hills, the Eilat Botanical Garden grows in the midst of the first organic farm in Israel.

Filled with 1,000 species of fruit trees, ornamental trees, herbs, shrubs and flowers from around the world, with viewpoints overlooking the Red Sea and the Edom mountains, the garden has sign-posted paths, a reconstructed stream, lakes, waterfalls and stone and wood buildings to explore. 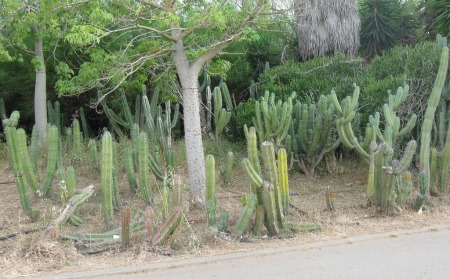 The cactus garden at Yarkon Park.

Yarkon is a huge urban park in Tel Aviv, encompassing six gardens: Fallen Soldiers Memorial Garden, Terror Victims Memorial Garden, a rock garden (one of the largest of its kind in the world), cactus garden, ornamental garden and tropical garden.

The five-acre tropical garden has a wooden walkway shaded by palm trees leading to a small lake. Its rainforest-like microclimate supports a large variety of orchids and vines. Nearby, a bike-rental center offers two-wheelers, tandem cycles and family bikes for three or four riders.

9 top sites to see in the Golan Heights