Folk-music duo Simon and Garfunkel paid the highest tribute to a bridge—the Queensboro Bridge in New York City, to be exact–in “The 59th Street Bridge Song” (“Feelin’ Groovy”). Of course, they also sang the metaphorical “Bridge Over Troubled Water.”

Sinatra, Elton John, The Pogues, Red Hot Chili Peppers and many other artists have crooned about bridges’ romantic, existential and symbolic roles.

After all, bridges are much more than passages over an obstacle.

The Israeli-designed glass bridge spanning the Zhangjiajie Grand Canyon in China made headlines recently as one of the scariest and most beautiful bridges ever built.

In Israel, there are dozens of bridges in all varieties–some for pedestrians and others for transportation; some for admiring nature and others providing an archaeological look into antiquity. 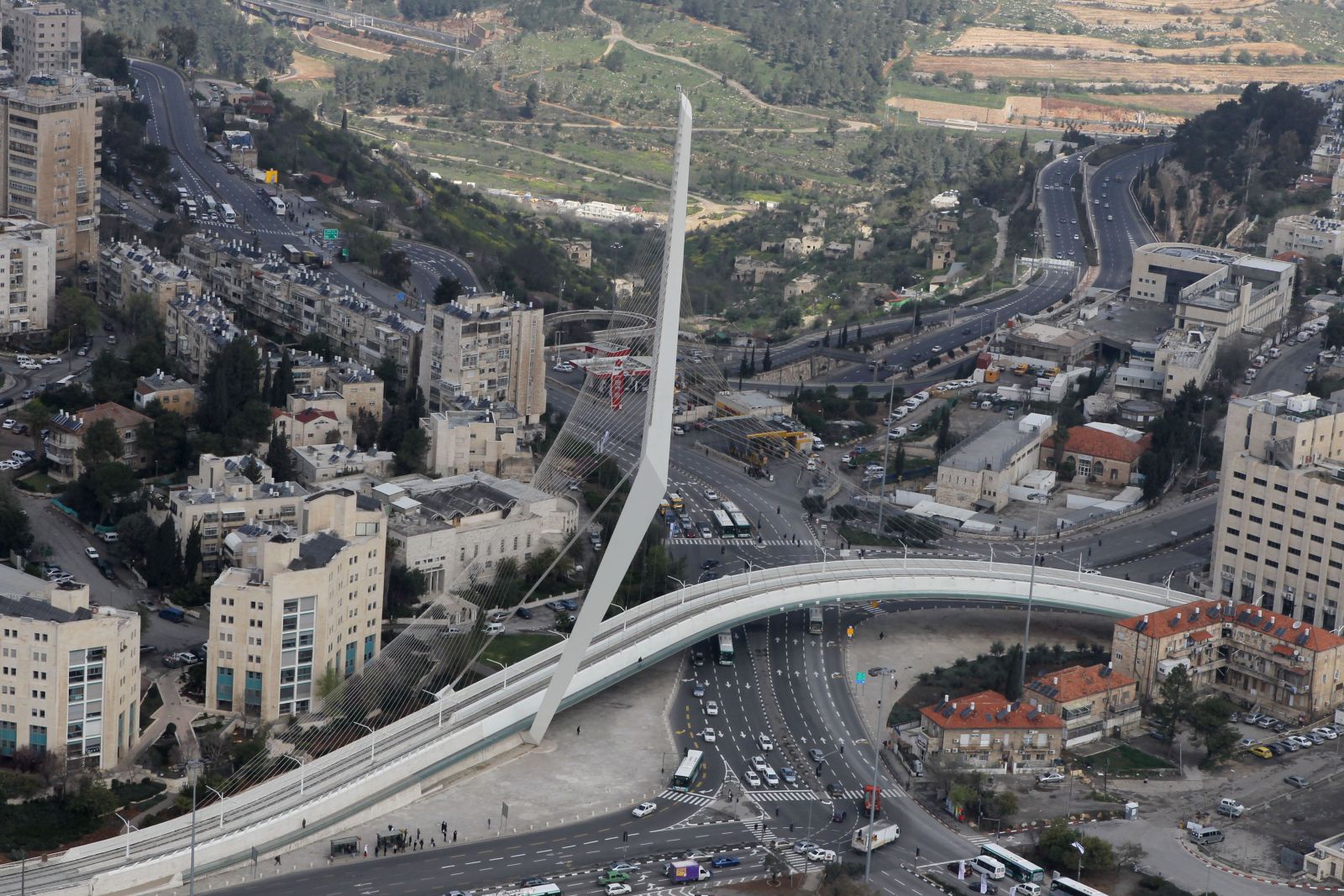 One of the most talked-about bridges in Israel is the Chords Bridge (also called the Bridge of Strings) dominating the Jerusalem skyline since June 2008.

This $70 million modern structure was designed by renowned architect Santiago Calatrava to accommodate the city’s light rail, pedestrians, and bicycles–inspiring love in some and loathing in others. 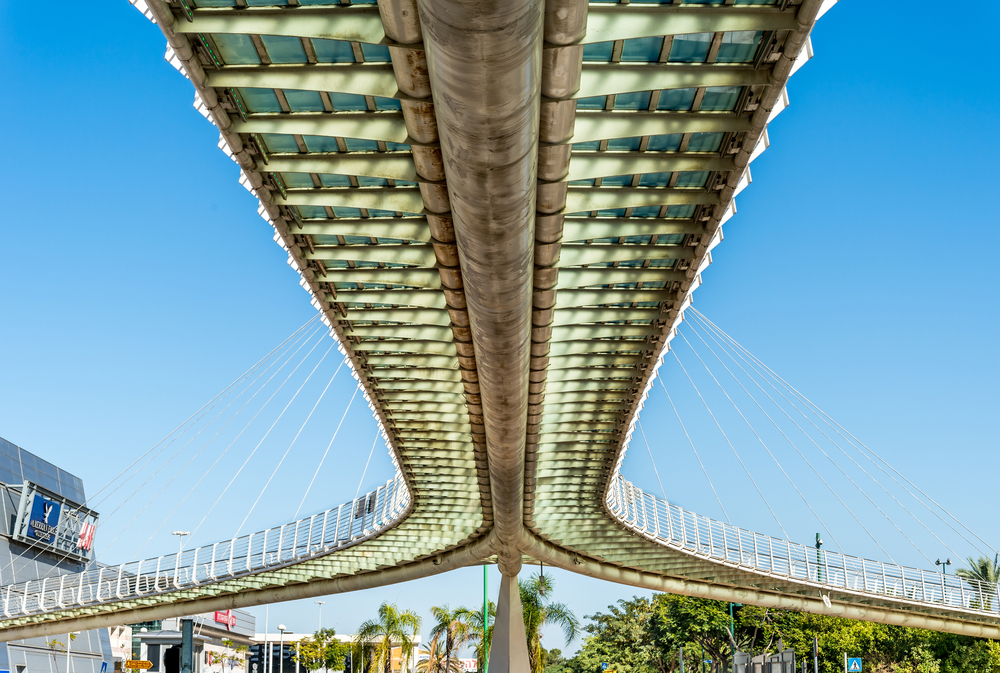 Calatrava’s other bridge project in Israel goes by the same name as his iconic Jerusalem construction.

The Petah Tikva Bridge of Strings connects pedestrians with the Rabin Medical Center, a shopping mall and a municipal park.

“Its function, in my opinion, is to serve the nearby hospitals. Moreover, it was built with private funding, with a relatively modest budget, and therefore it is hard to compare it to other bridges I’ve built, including the one in Jerusalem,” Calatrava commented about the Petah Tikva skywalk.

“For me, the bridge is only a tool that is supposed to lend a little more beauty to the important and moving project of the hospitals [nearby],” said Calatrava. “Every time I visit, I’m amazed once again by the level of medicine and also by the level of compassion and generosity there. That’s why I’m proud that my bridge, as small and modest as it may be, is located there, of all places.” 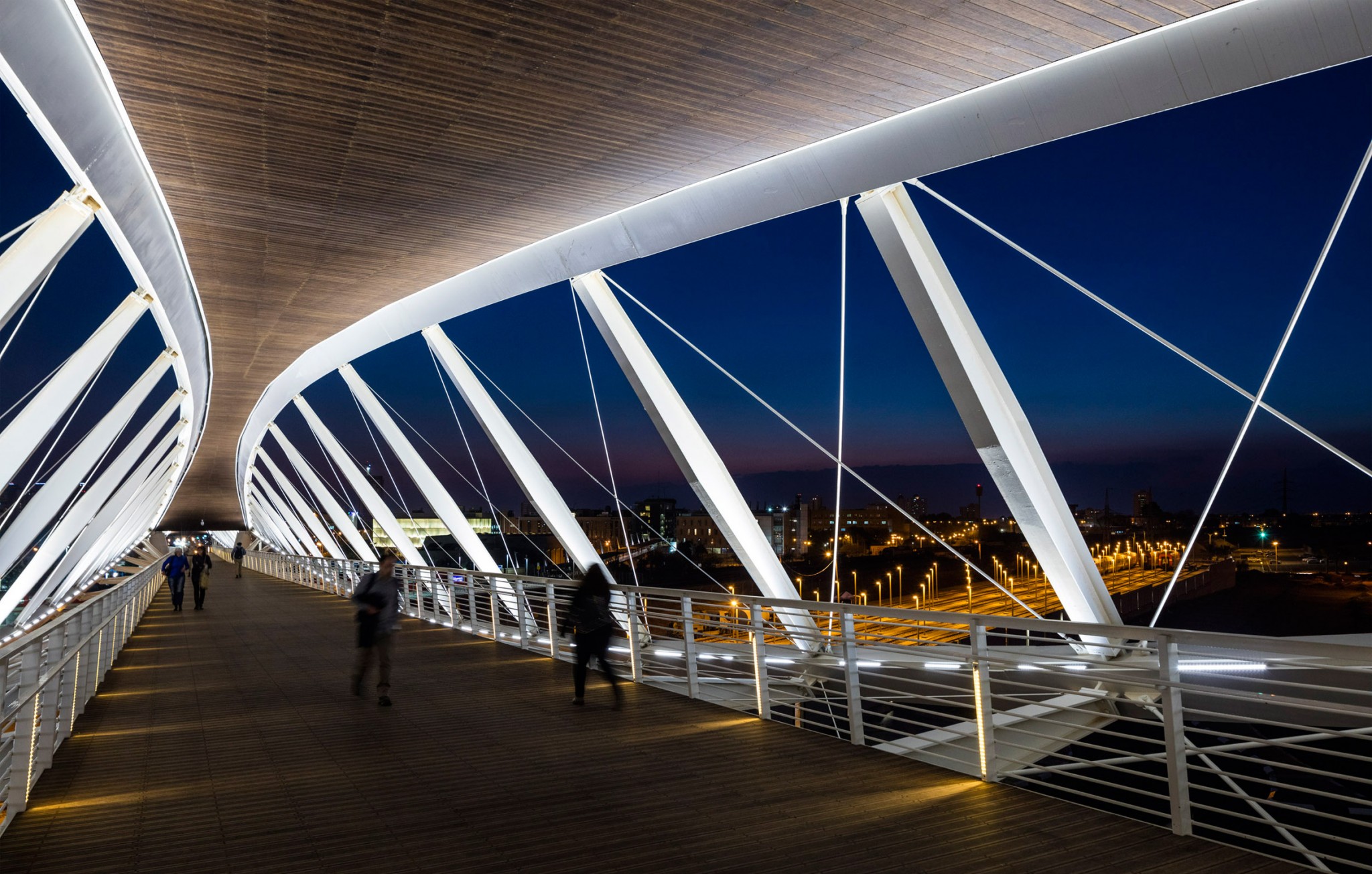 The steel bridge answers an accessibility dilemma that had plagued workers at the technology park. Now, instead of walking around the railway tracks under the bridge, they can simply cross over them.

The bridge–which lights up at night–was built by Bar Orian Architects and Rokach Ashkenazi Engineers. Its four undulating steel arches are twisted to create the shape of two eyes in the space between them.

“The arched formation creates a protected space for pedestrians, an experiential and exclusive journey, in which each step reveals a surprising view of shapes, materials, and sights,” said the architects. 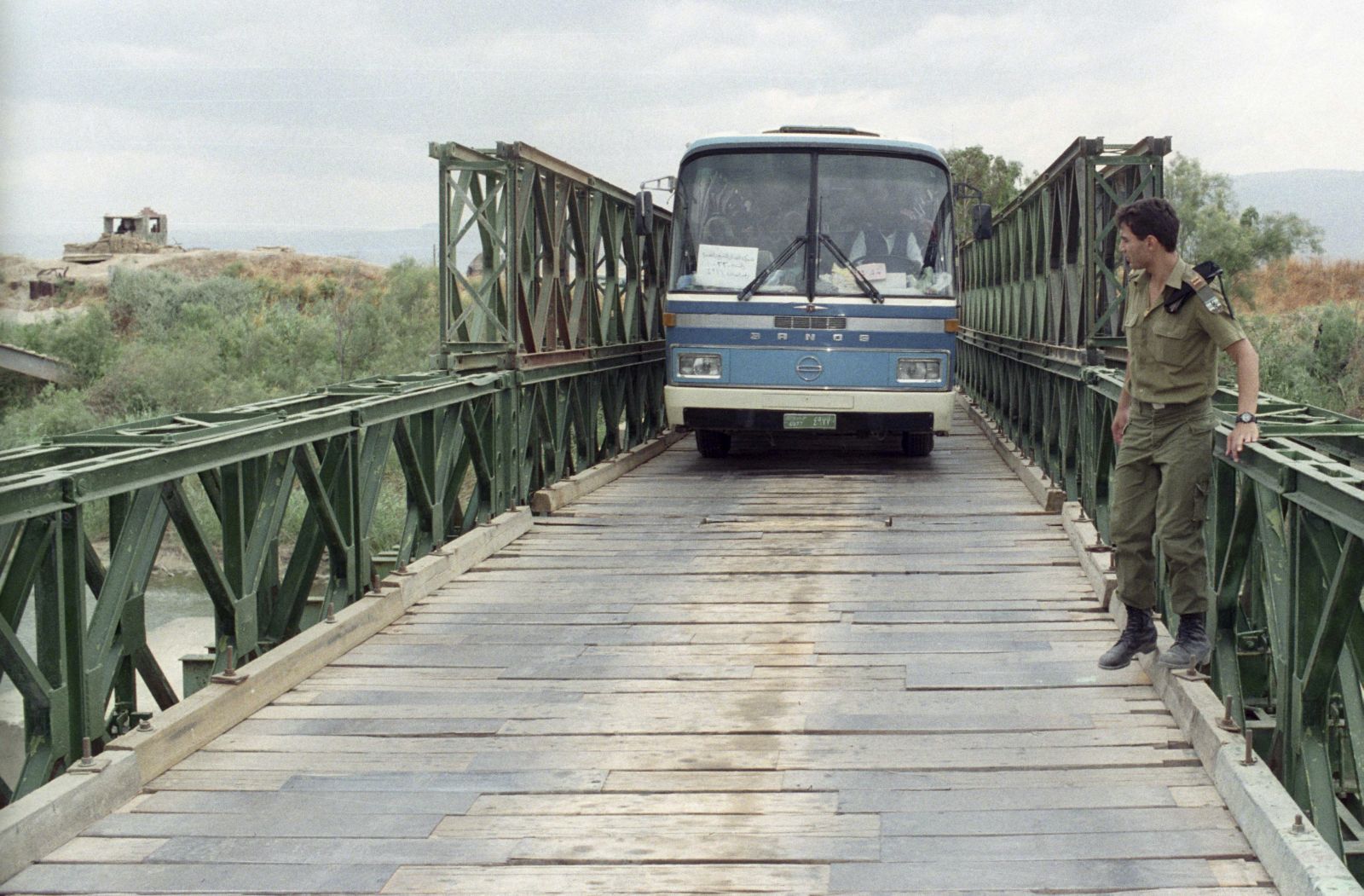 A bus crosses the Allenby Bridge in this file photo from 1992. Photo by FLASH90

The Allenby Bridge (also known as Al-Karameh Bridge and the King Hussein Bridge) is one of the best-known bridges in the country. It serves as a border crossing over the Jordan River. Though it is located on the site of an Ottoman structure, the current crossing is a modern paved passage.

And like the Albert Bridge over the River Thames in London, which features in a song by The Pogues, Allenby Bridge is the locus of a 1971 song by local composer Nurit Hirsh. 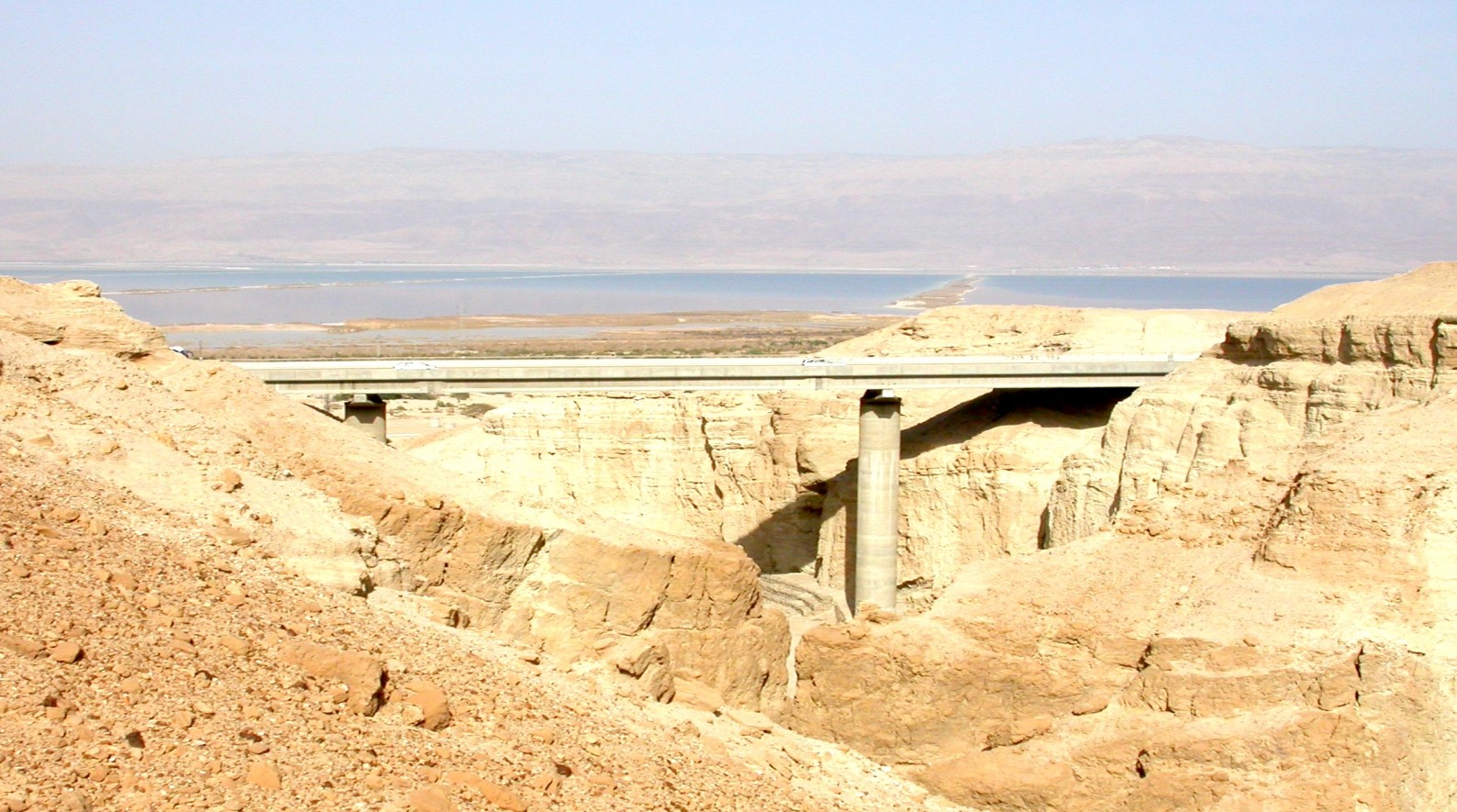 The Zohar Bridge with the Dead Sea in the background. Photo by Izhak Stern/YDE Engineers

There is nothing aesthetically spectacular about the Zohar Bridge. It’s special because it is the lowest bridge on earth.

The bridge is located in the Dead Sea area, in a high seismic risk zone 40 meters above the Zohar riverbed, and has a maximum span of 52 meters.

In architectural terms, this structure is a spliced girders bridge. YDE Engineers, the company that built the Zohar Bridge, says that gives it yet another distinction. “Due to this construction method and the optimization of the cable layout, this is the bridge with the longest span using standard AASHTO VI girders.” 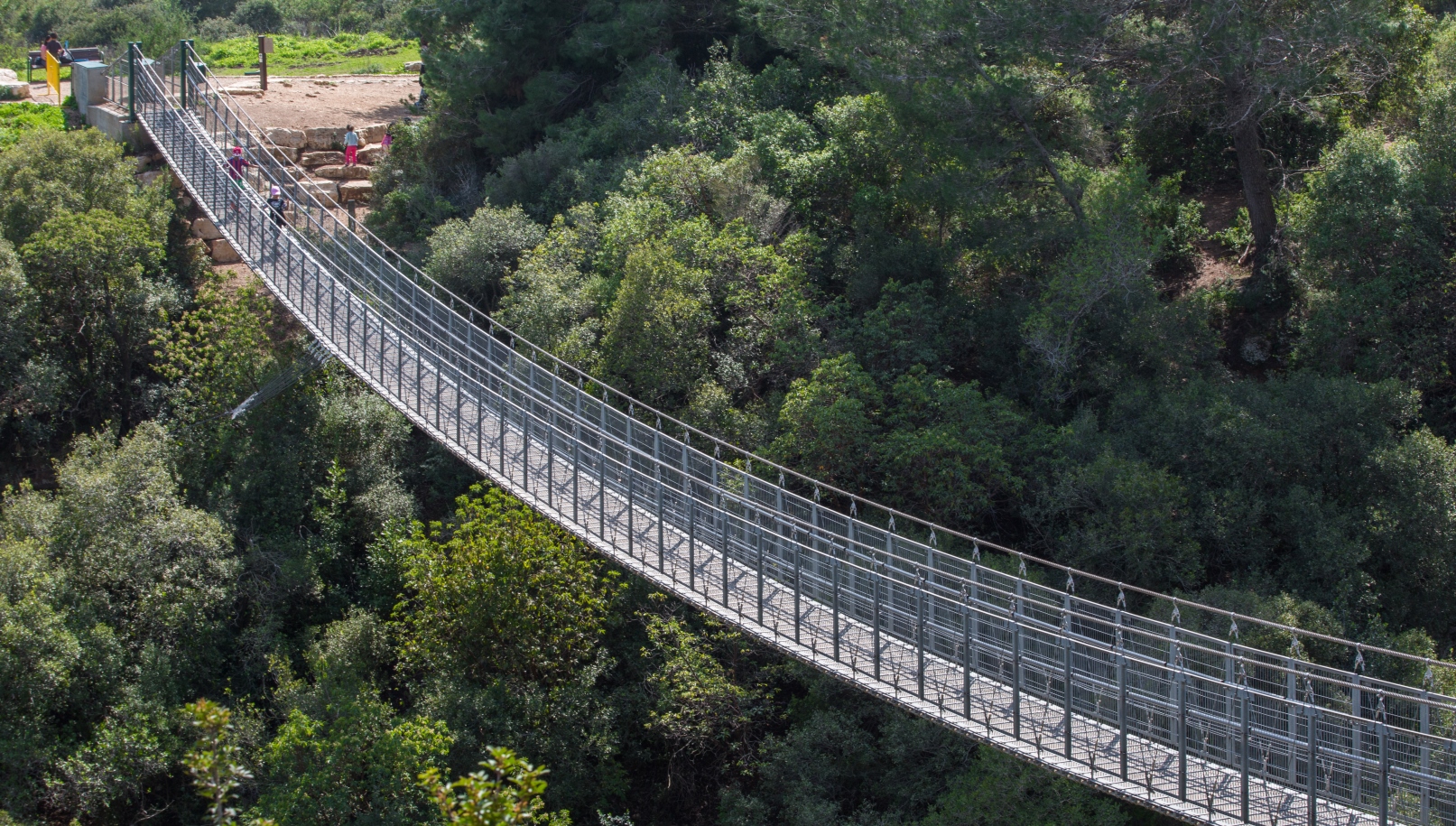 Who doesn’t like to swing in the air above treetops?

The Hanging Bridges spanning the Katia riverbed in Nesher Park, on the northern side of Mount Carmel, cause squeals of delight from pedestrians.

The 70-meter-long suspended bridges of wood and steel are part of a walking route through the park’s native Mediterranean woodland. 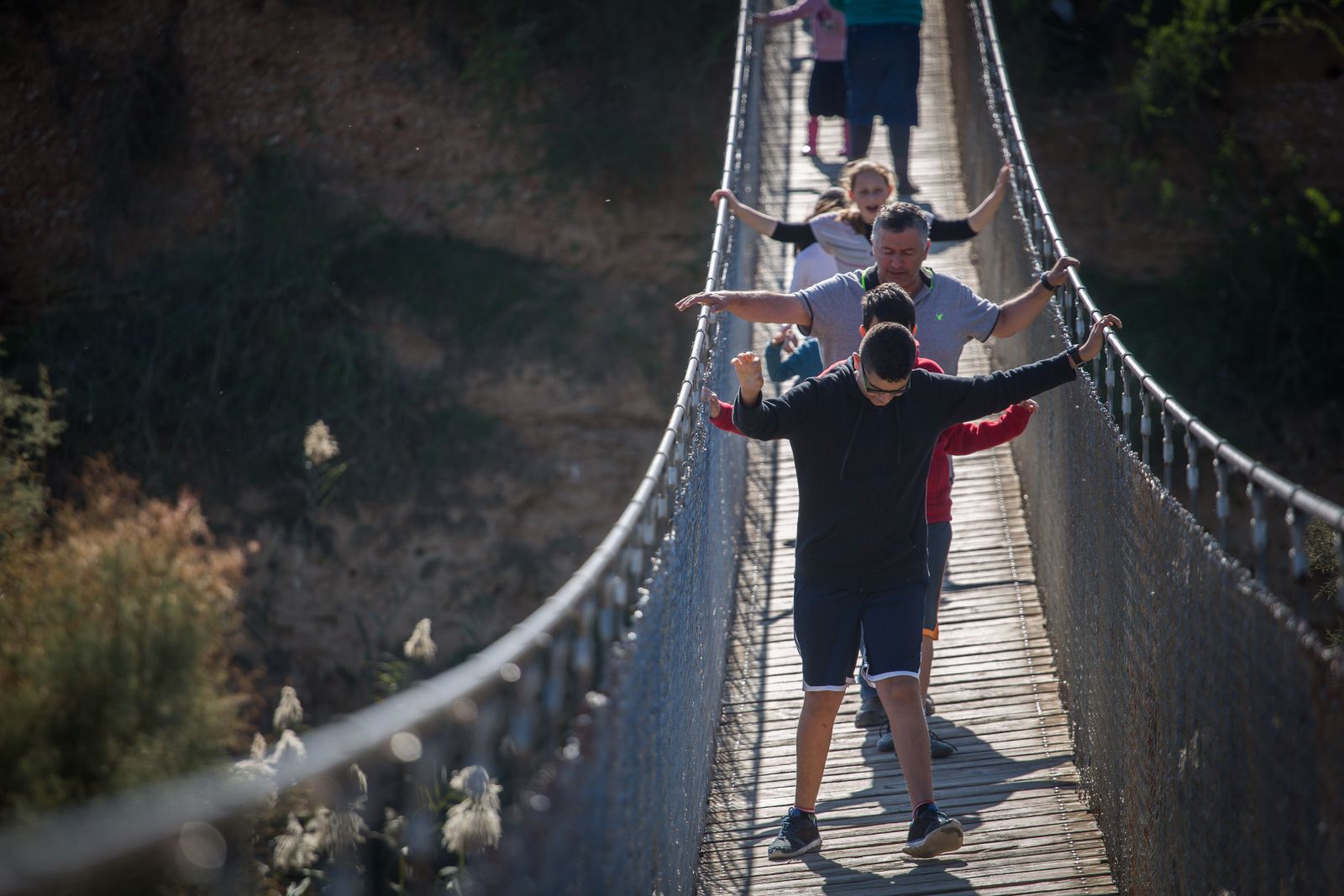 Another alternative is the 80-meter-long rope hanging bridge over the Besor River in Eshkol Park down south. 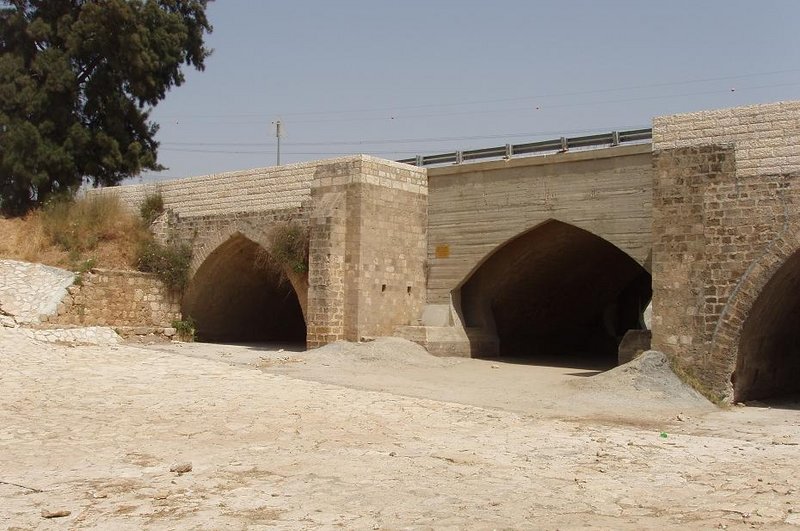 The Ad Halom (“Until this Point”) Bridge is an historical landmark at the entrance to Ashdod. It was the northernmost point in Israel to which the Egyptian army advanced during the War of Independence.

The bridge was built over the Lakhish River in the 13th century, renovated at the end of the 19th century by the Ottomans, and destroyed in 1948. After the war, the Ad Halom Bridge–previously known as Isdud Bridge or Jisr Isdud–was reconstructed.

Today one of the country’s biggest roadways, Highway 4, crosses the bridge.

Fun fact: Israeli cloud security company Adallom named itself after Ad Halom to suggest its cyber technologies are the last line of defense against hackers. Microsoft acquired the company for over $300 million in 2015. 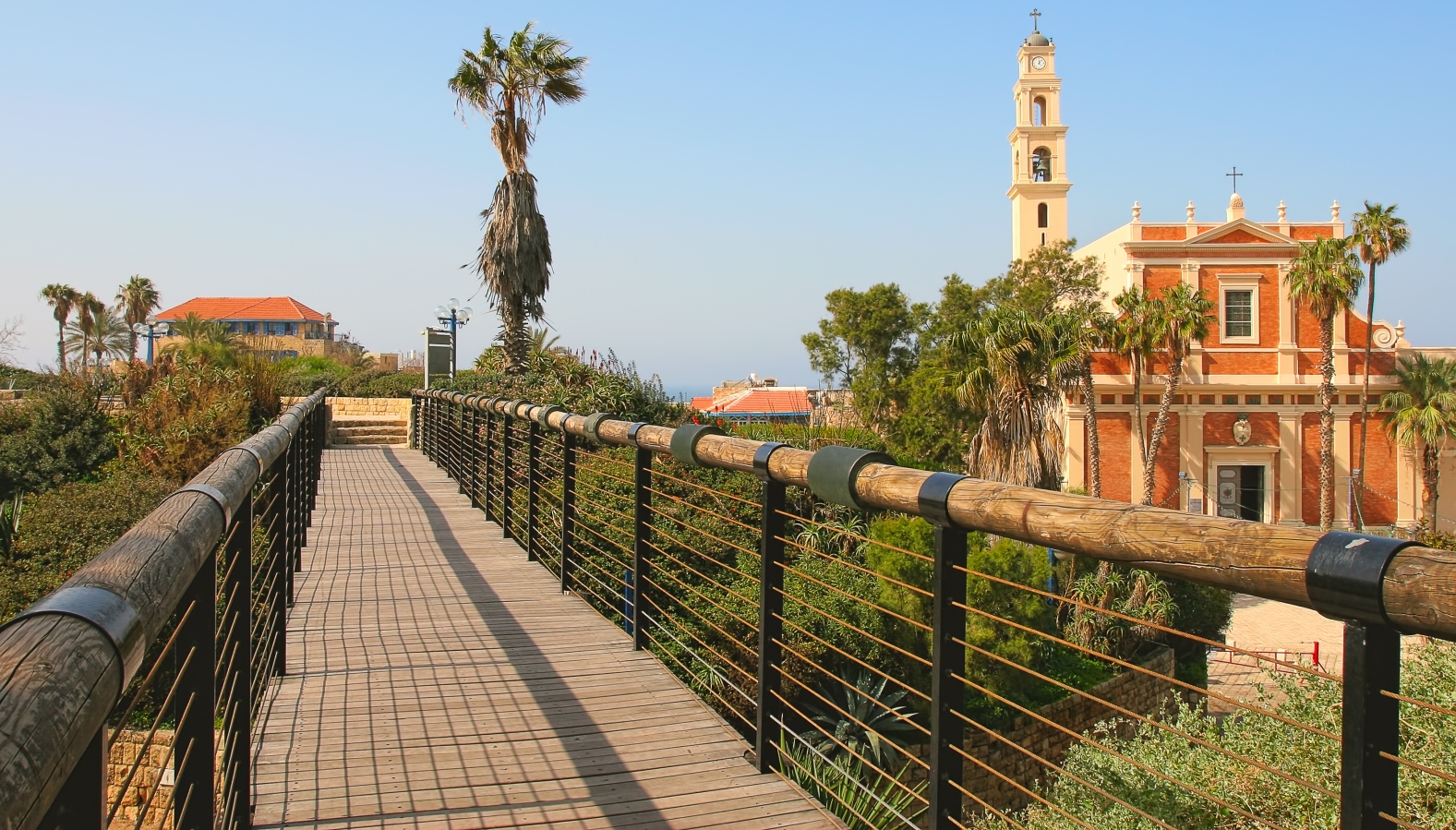 In the Old City of Jaffa, the Wishing Bridge connects Peak Park and K’dumim Square. It’s customary to make a wish from this short wooden bridge while looking out to the Mediterranean Sea.

Jaffa artists Esther Shlomo and Freddy Fabian sculpted the 12 bronze Zodiac plaques placed on the rails of the bridge, while Varda Ghivoly and Ilan Gelber created a stone mosaic comprising the Zodiac signs at its entrance.

The Old City of Jaffa is actually teeming with references to astrology; don’t miss the Zodiac Fountain in K’dumim Square as well. 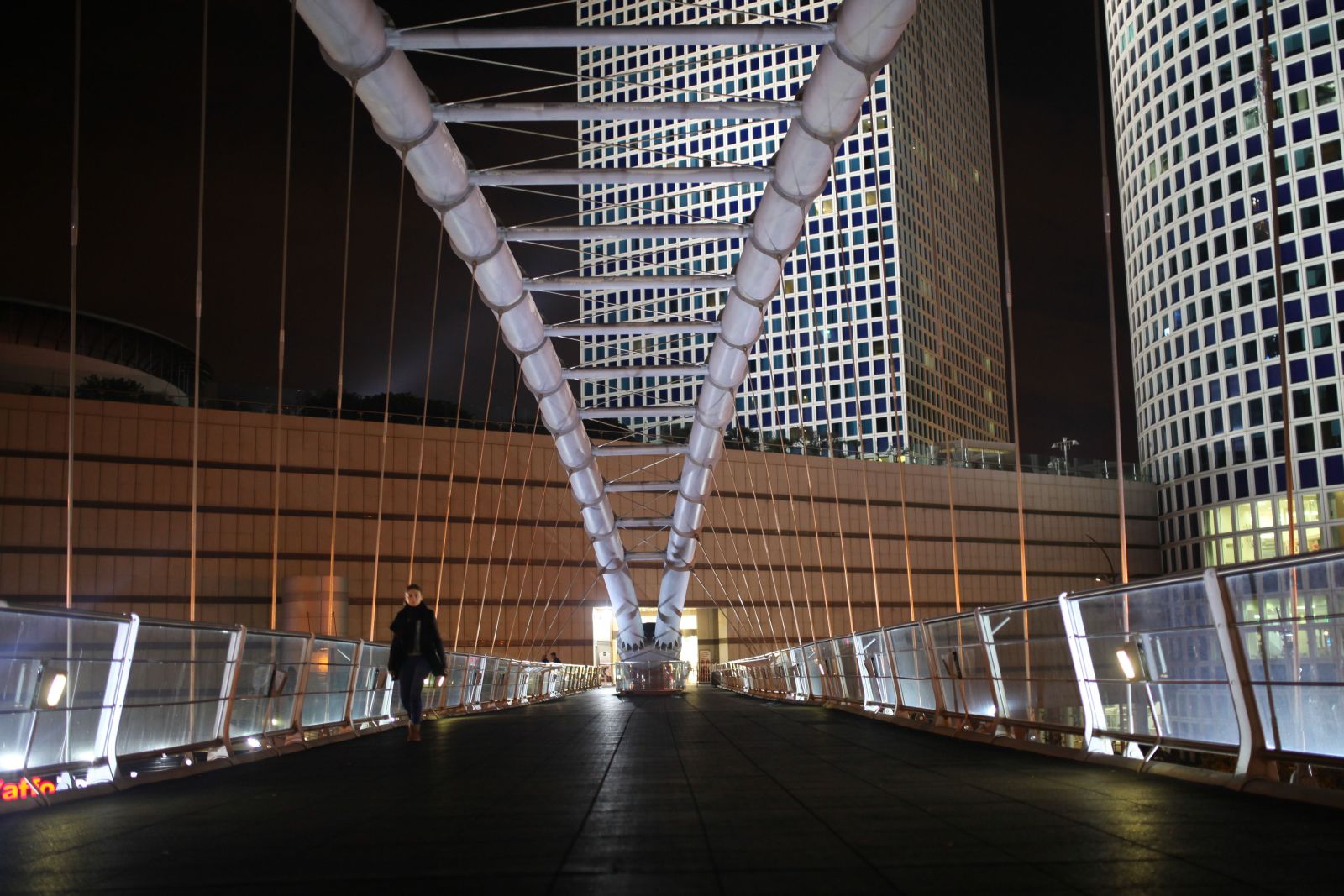 Every day, an estimated 5,000 people make their way across the bridge at the Azrieli Center in Tel Aviv.

At 100 meters long and 10 meters wide, the bridge connects the business and shopping center to HaShalom Railway Station on one side, and the Defense Ministry compound on the other side.

Opened in 2003, the Azrieli Bridge is one of the most photographed in the country. The geometric shapes of the adjacent Azrieli Towers are an iconic architectural feature of the Tel Aviv skyline. 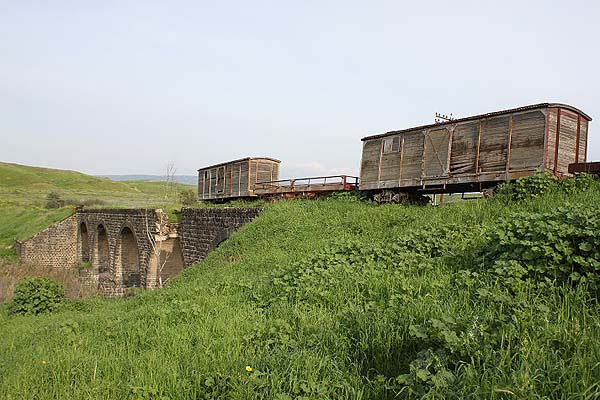 Jisr al Mejamie Bridge is one of the relics of the Jezreel Valley Railway, a segment of the longer Haifa-Dera’a line of the Hejaz Railway.

At 257.7 meters below sea level, it was the lowest commuter railway bridge in the world.

In 1948, the stone bridge was damaged to halt the Arab Legion from crossing the Jordan. The bridge has since undergone restoration and, though not in use, serves as an historical peek into the past.

The bridge is located in the neutral zone at the Jordan-Israel border. Visitors to Old Gesher, adjacent to Kibbutz Gesher, can request a special pass to visit this bridge. Four Hejaz Railway freight cars are displayed on the bridge.