Jewish historian Josephus Flavius told of a small Roman-era theater built in the vicinity of the Western Wall in Jerusalem. But no one had seen it for nearly two millennia.

Archaeologists beginning with Charles William Wilson have been searching for that theater for 150 years to no avail.

Now it seems they’ve found it.

As happens so often in archaeology, the theater’s discovery was by accident. Diggers were excavating a known Second Temple road under Wilson’s Arch (named for the British archaeologist) when they ran into flat stones placed unusually in a circle. It wasn’t an ancient traffic circle but a Roman theater which, when it was finally uncovered, changed archaeologists’ entire understanding of Jerusalem after the destruction of the Second Temple.

“We saw there was leisure, entertainment under Wilson’s Arch,” explained archaeologist Tehilla Lieberman, who described the discovery as “unbelievable” and “a real drama.”

Because the theater is located under a roofed space, the archaeologists from the Israel Antiquities Authority note that the theater was probably an odeon for acoustic performances. (Or it may have been a “bouleuterion,” a building where the city council met.)

That said, the theater was probably never used. The stairs are not fully hewn and there are rocks that have guide marks but weren’t fully carved, explained archaeologist Joe Uziel during a press conference early last week.

What could have interrupted the theater’s construction? Uziel speculates perhaps it was the Bar Kochba Revolt, which resulted in the banning of Jews entirely from Jerusalem around 136 CE. 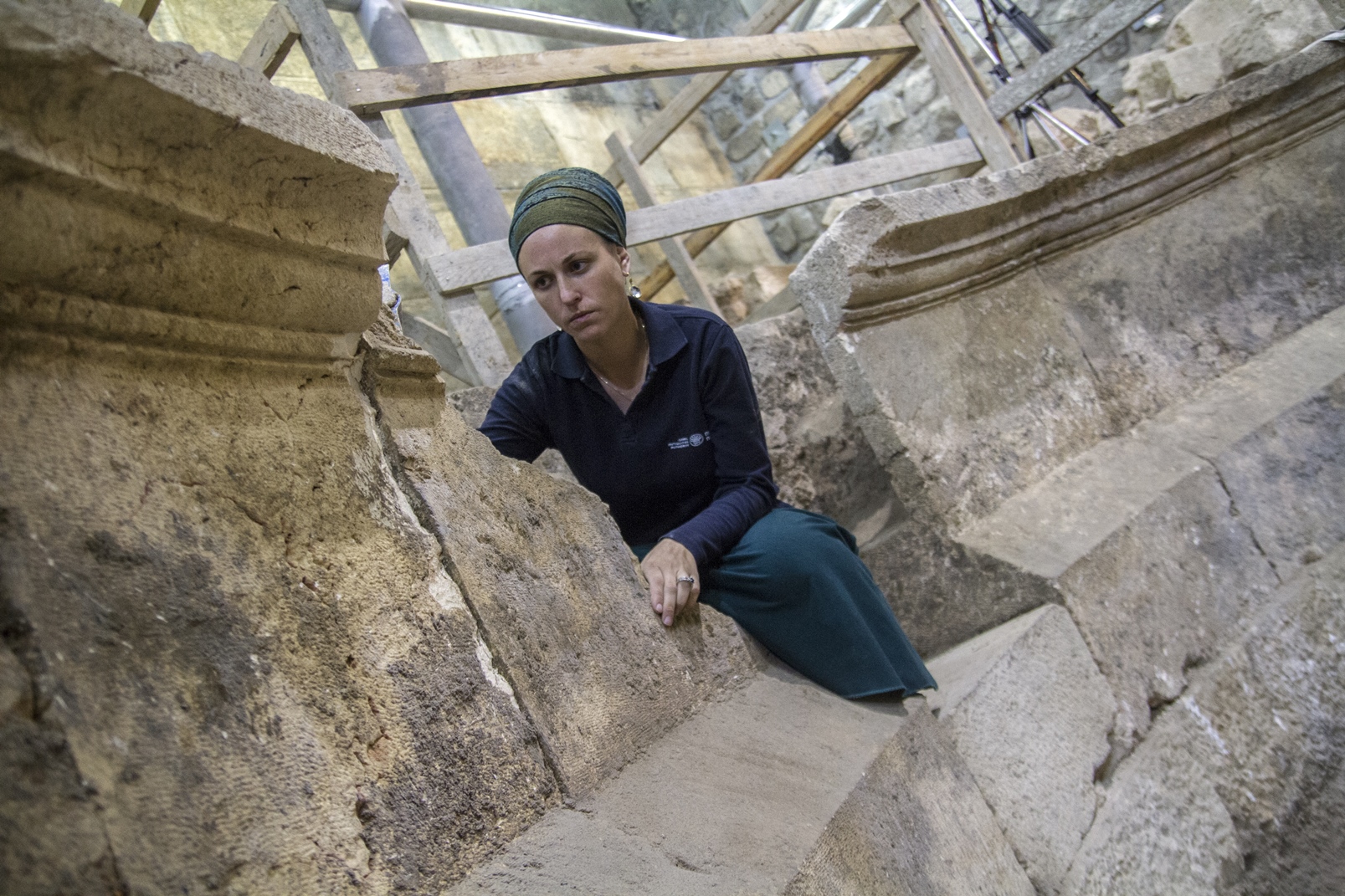 The theater’s placement also suggests the theater may have been built as an insult to the former Jewish presence on the Temple Mount: its seats were arranged so that audience members would have their backs to the former center of Jewish worship and power.

It also appears that the paving stones from the Second Temple road the archaeologists were excavating were repurposed for benches in the theater, and a drainage duct was lowered to make way for the seating.

The theater’s discovery, while important, still doesn’t shed light on the ongoing mystery of what was happening on the Temple Mount in the period between the destruction of the Second Temple and Muslim rule. For example, was a Temple of Jupiter built on the mount?

No evidence has been found, in part because excavations are not permitted on the Temple Mount itself. (The archaeologists stressed that the dig did not extend under the Temple Mount.)

The theater is relatively small compared to other Roman theaters in the Holy Land, such as those at Caesarea, Beit She’an and Beit Guvrin.

The theater remained elusive for so many years because it was buried eight meters under the current ground level of the Western Wall. Following a massive earthquake in 360 CE, Jerusalem residents – concerned that the arch would collapse – filled in the area with dirt and debris.

The theater will eventually be opened to the public as part of the Western Wall Tunnel Tour. Excavation work will continue for another six months. The archaeologists hope to connect the water drainage system in the area of the theater to the one in the nearby City of David, creating a new attraction for visitors.

The archaeologists’ findings were presented at the “New Studies in the Archaeology of Jerusalem and its Region” conference last week at the Hebrew University.

The goat cheese caves of Israel