For the first time in approximately 60 years, archaeological excavations have uncovered fragments of a biblical scroll. Written in Greek, the scroll includes portions of the Books of the Twelve Minor Prophets, including the books of Zechariah and Nahum.

The scroll fragments and other rare finds were discovered by Israel Antiquities Authority archaeologists in a dramatic and challenging effort aimed at preventing looting of antiquities in the Judean Desert.

“These are the things you are to do: Speak the truth to one another, render true and perfect justice in your gates. And do not contrive evil against one another, and do not love perjury, because all those are things that I hate—declares the Lord.”

These verses, from Zechariah 8:16–17, were discovered in a cave where Jewish refugees hid almost 1,900 years ago. The verses, written on dozens of parchment fragments, were discovered during the course of a complex operation undertaken by the Israel Antiquities Authority on the cliffs of the Judean Desert, starting in 2017, in order to prevent antiquities looting. This historic discovery comes 60 years after the last of what’s known as the Dead Sea Scrolls was found. 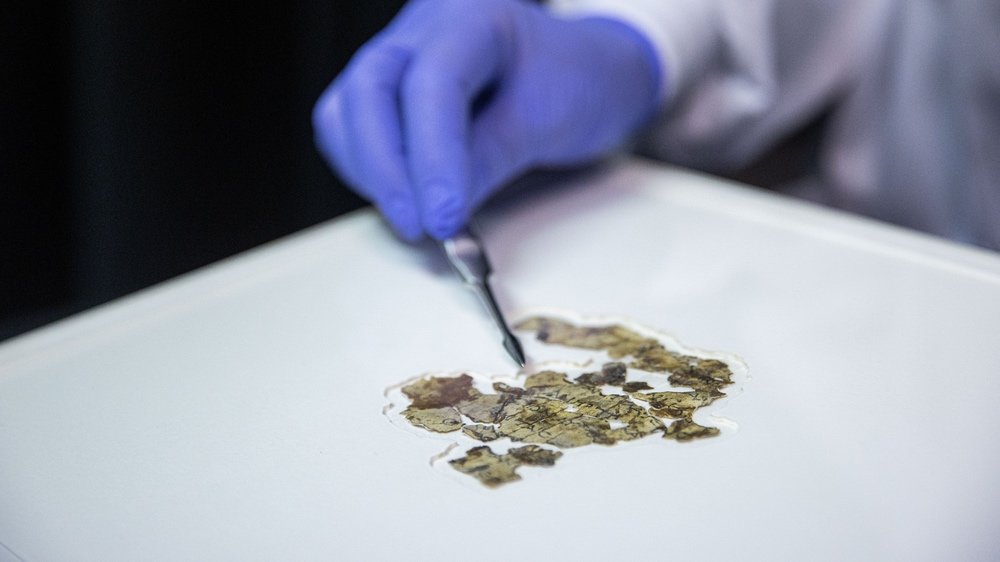 Putting the scrolls back together. Meticulous, but fascinating work.

In addition to the scroll fragments, additional extraordinary finds from various periods were uncovered, including:

The Dead Sea Scrolls include the earliest known copies of the books of the Bible. As such, they are considered the most important archaeological discovery of the 20th century. These “new” scroll fragments, which bear verses from the books of the prophets Zechariah and Nahum and are written in Greek, were retrieved from the Cave of Horror in the Judean Desert in caves situated along a deep ravine, requiring archaeologists to cling to ropes as they conducted their crucial work. The cave, roughly 80 meters below the cliff top, is flanked by gorges and can only be reached by rappelling precariously down the sheer cliff.

Additional finds left behind by the Jewish rebels who fled to the caves at the end of the Bar Kokhba Revolt include a cache of coins bearing Jewish symbols such as a harp and a date palm, arrow- and spearheads, woven fabric, sandals and even lice combs. 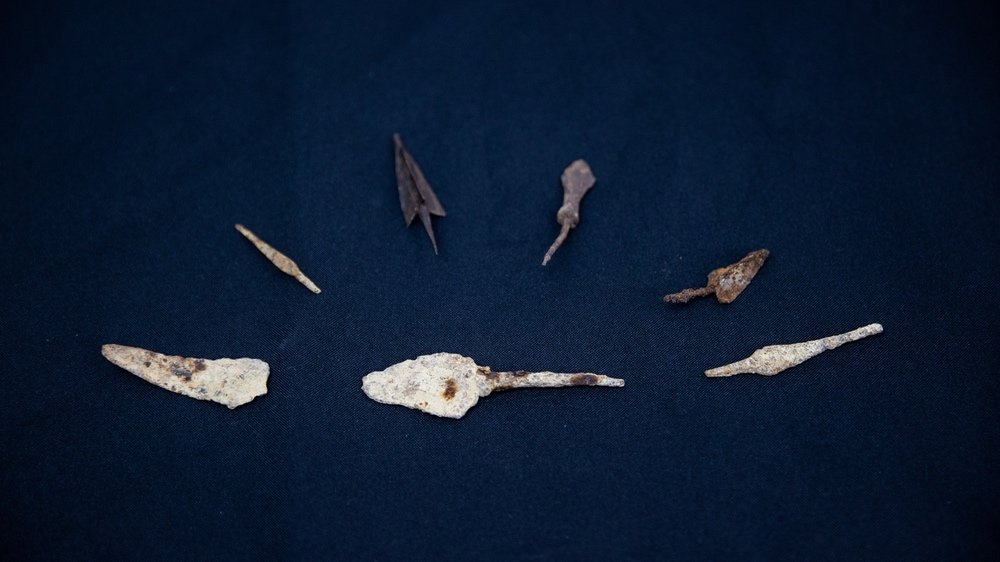 Arrow and spearheads from the Roman period, when Jewish rebels were fighting for their freedom.

Ever since the Dead Sea Scrolls were discovered over 70 years ago, the desert caves have been targeted by antiquities looters; the climatic conditions inside them have enabled the exceptional preservation of scrolls and ancient documents, which are cultural heritage assets of immense importance. As such, they are sought after by cave looters, who risk life and limb in their search, as well as damaging the caves and destroying historical evidence.

“The aim of this national initiative is to rescue these rare and important heritage assets from the robbers’ clutches,” says Israel Antiquities Authority Director Israel Hasson. “The newly discovered scroll fragments are a wakeup call to the state. Resources must be allocated for the completion of this historically important operation. We must ensure that we recover all the data that has not yet been discovered in the caves, before the robbers do. Some things are beyond value.”

Addressing the archaeological team, Hasson added, “The desert team showed exceptional courage, dedication and devotion to purpose, rappelling down to caves located between heaven and earth, digging and sifting through them, enduring thick and suffocating dust, and returning with gifts of immeasurable worth for mankind.” 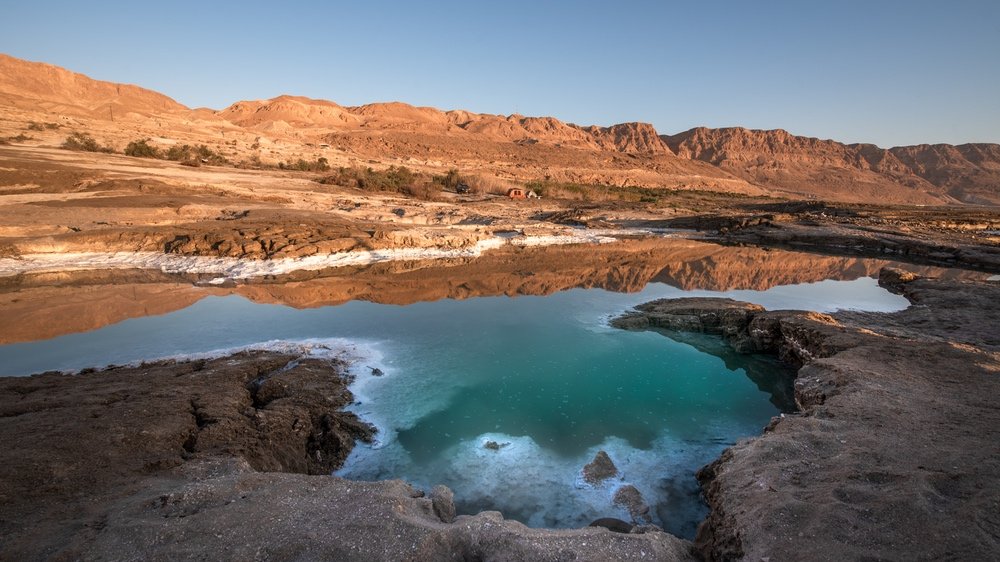 Reaching the caves in those cliff sides is no easy task.

Avi Cohen, the Director General of the Ministry of Jerusalem and Heritage: “The scroll fragments containing biblical texts, the coins and the additional finds from the Second Temple Period that were found in this unique project directly attest to the Jewish heritage of the region and the inseparable bond between the Jewish cultural activities and our place in this land. It is very exciting to see these finds and expose them to the public, finds which shed great light on our history. These finds are not just important to our own cultural heritage, but to that of the entire world. The ongoing project includes the combination of extraordinary professionals and advanced technologies, and we are proud of this unique cooperation, which we applaud.”

According to Hananya Hizmi, Head Staff Officer of the Archaeology Department of the Civil Administration in Judea and Samaria: “This is definitely an exciting moment, as we present and reveal to the public an important and significant piece in the history and culture of the Land of Israel. In as early as the late 1940s, we became aware of the cultural heritage remains of the ancient population of the Land of Israel with the first discoveries of the Dead Sea Scrolls. Now, in this national operation, which continues the work of previous projects, new finds and evidence have been discovered and unearthed that shed even more light on the different periods and cultures of the region.”

It is a fascinating exercise to compare modern versions of the Bible with more ancient copies.

Since the operation began in October 2017, three teams have been systematically surveying the caves in the desert cliffs. The complex operation has included employing drones and reaching virtually inaccessible caves with the aid of rappelling techniques and mountain-climbing equipment. Archaeological excavations were conducted in select caves. Dozens of youths and members of pre-military preparatory programs have also joined the effort in those areas that more accessible. This is part of the Israel Antiquities Authority’s educational program policy, which seeks to nurture a young generation in the country that is connected to its heritage.

The fragments of the Greek scroll of the Book of the Twelve Minor Prophets discovered in the operation was written, uniquely, by two different scribes. The conservation and study of the fragments conducted by the Dead Sea Scrolls Unit at the Israel Antiquities Authority has allowed for the reconstruction of 11 lines of text, partially preserving the Greek translation of Zechariah 8:16–17. Also identified, on another fragment, are verses from Nahum 1:5–6, “The mountains quake because of Him, and the hills melt. The earth heaves before Him, the world and all that dwell therein. Who can stand before His wrath? Who can resist His fury? His anger pours out like fire, and rocks are shattered because of Him.” 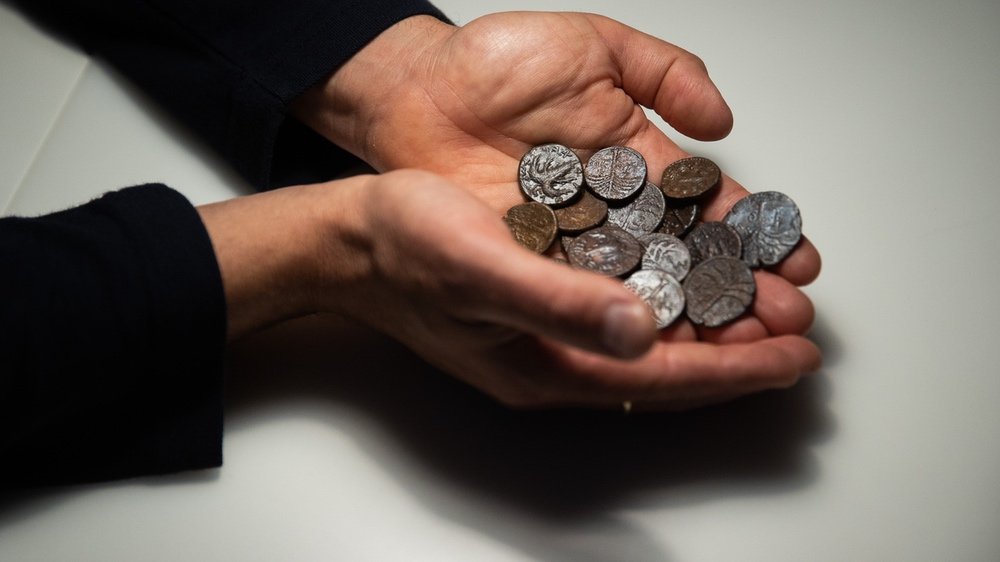 A stash of Jewish coins in the desert.

When comparing the text preserved in the newly-discovered fragments to the text known to us from other versions of these passages, including the verses known in the Masoretic text, numerous differences are notable, some of which were quite surprising. These differences can tell us quite a bit regarding the transmission of the biblical text up until the days of the Bar-Kokhba Revolt, documenting the changes that occurred over time until reaching us in the current version. Another exciting aspect about this scroll is that despite most of the text being in Greek, the name of God appears in ancient Hebrew script, known from the times of the First Temple in Jerusalem.

Another astounding discovery was found near the rock wall inside the Cave of Horror: A 6,000-year-old partially mummified skeleton of a child, wrapped in cloth. According to prehistorian Ronit Lupu of the Israel Antiquities Authority, “On moving two flat stones, we discovered a shallow pit intentionally dug beneath them, containing a skeleton of a child placed in a fetal position. It was covered with a cloth around its head and chest, like a small blanket, with its feet protruding from it. It was obvious that whoever buried the child had wrapped him up and pushed the edges of the cloth beneath him, just as a parent covers his child in a blanket. A small bundle of cloth was clutched in the child’s hands. The child’s skeleton and the cloth wrapping were remarkably well preserved and because of the climatic conditions in the cave, a process of natural mummification had taken place; the skin, tendons, and even the hair were partially preserved, despite the passage of time.”

A preliminary study of a CT scan suggests that this child was 6-12 years old. 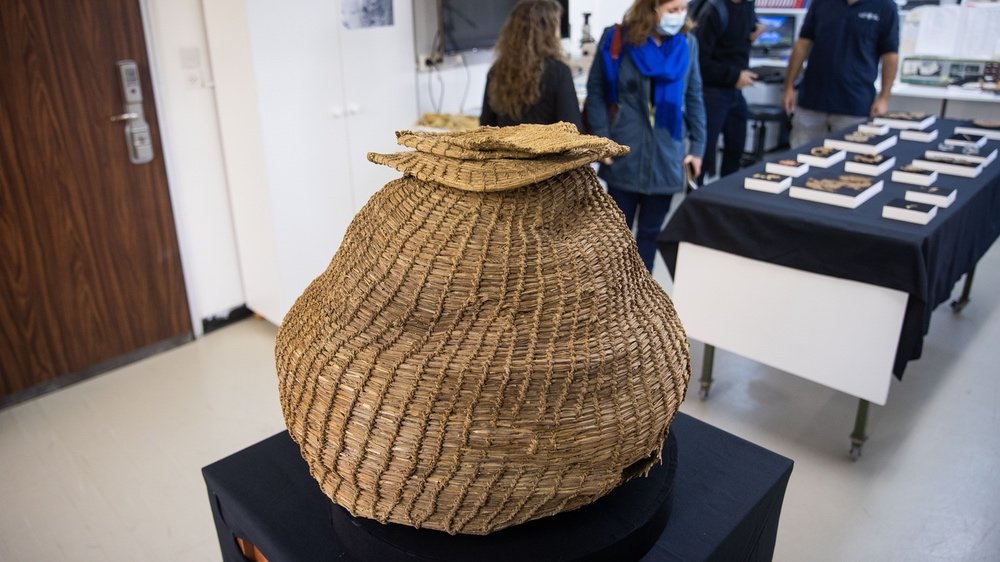 A remarkably well preserved basket dated to be at least 10,000 years old, attesting to the incredible heat and aridity of the caves in the Dead Sea region.

Another find, currently unparalleled worldwide, was discovered by youths from the Nofei Prat pre-military leadership academy in one of the caves: a huge intact basket with a lid that was also exceptionally well preserved due to the high temperatures and extreme aridity of the region. The basket dates to the Pre-Pottery Neolithic period, approximately 10,500 years ago. As far as we know, this is the oldest basket in the world that has been found completely intact and its importance is therefore immense. The basket had a capacity of 90–100 liters and was apparently used for storage. The basket provides fascinating new data on the storage of products some 1,000 years before the invention of pottery. The basket is woven from plant material and its method of weaving is unusual. When it was found it was empty, and only future research of a small amount of soil remaining inside it will help us discover what it was used for and what was placed in it.