3 scraps from 1,000 BCE, earliest such finds in region, point to Edomite kingdom described in Bible; vibrant and lasting ‘royal’ dye, mark of the elite, comes from murex sea snails.

Israeli researchers have found three textile scraps near the southern tip of Israel colored with the biblically described “argaman” royal purple dye, and dated them to circa 1,000 BCE — the era of King David. The earliest ever such finds in this region, the vibrant cloths add tangible weight, in particular, to the Bible’s account of an Edomite kingdom in the area at that time.

Colored with the most precious dye of the ancient world, the textile scraps were excavated in the Timna Valley near Eilat, and offer startling new insight into an ancient elite class. The tiny, vibrantly colored Iron Age cloth pieces are the earliest evidence of this precious dye in the entire Southern Levant and shed new light on the early Edomite kingdom and Israelite kingdoms 3,000 years ago — a period when the Bible details the conquering of the Edomites by King David.

Also called “true” or “Tyrian purple,” the vibrant, millennia-lasting color is produced by dye glands gathered from three species of live murex sea snails on the shores of the Mediterranean Sea. To reach the famed King Solomon Copper Mines at Timna near the shore of the Red Sea, the cloth would have traveled hundreds of kilometers, which only added to its prestige and value.

“It is a very early period to find ‘true purple’ in use and it’s a very strange location,” Tel Aviv University Prof. Erez Ben-Yosef told The Times of Israel Thursday. “It’s deep in the desert, where we didn’t [traditionally] think these prestigious materials were in use.”

The discovery, said Ben-Yosef, offers “additional evidence for our new understanding of nomadic people at that time period, at the time of the emergence of these ancient kingdoms of Israel, Edom, Moab, Amon, the local kingdoms of the biblical time.” Ben-Yosef has excavated at Timna since 2013.

The true purple “argaman” dye and its associated azure “techelet” variant (created through variant processing of the snails’ dye) are mentioned dozens of times in the Hebrew Bible and in the circa 690 BCE Sennacherib’s Cylinder, among other texts. The true purple is associated with royalty and the priesthood, as well as textiles used in the Tabernacle and Jewish Temple.

Until now, the earliest textile evidence of the royal purple dye were dated to at least 1,000 years later in the Roman period, when it was highly valued.

Ben-Yosef explained that Timna is first and foremost known for its copper, which was mined by ancient Land of Israel dwellers as early as the 5th millennia BCE, going all the way to the early Islamic period some 1,400 years ago. Even recently, he said, the nascent state of Israel had a small factory that produced copper there.

The dry climatic conditions at Timna, deep in the Arava Desert, allow for the unusually good preservation of organic materials, similar to the much later Roman era textile and leather finds discovered in the Judaean caves and at Masada.

What is noteworthy in Timna, said Ben-Yosef, is that the “big story” is related to the early Iron Age. “We’re talking about the 11th to the 9th centuries BCE, and it is a very debated period in the history of the land,” the period attributed to the rise of the biblical kingdoms of Judah and Israel. 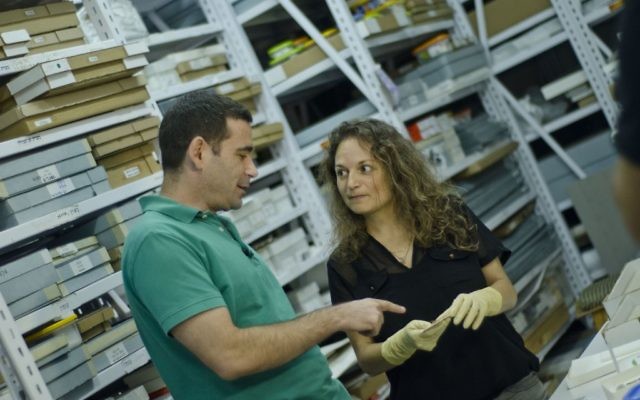 Alongside remnants of textiles and other indications of relatively luxurious conditions, the picture painted after continued excavations is changing the view of the nomadic Edomite, said Ben-Yosef. “We see it as the early Edomite Kingdom,” versus a mere tribal camp.

With Timna’s arid desert, “We find stuff that you usually don’t find in regular excavations, such as textiles, ropes, leather, things that usually decay and are not preserved,” said Ben-Yosef. “So we have a unique window into the people of the region at that very early period through these amazing and unique organic materials. We have dozens and dozens of fragments of textiles and ropes, cordage, basketry, things that usually you don’t find.”

Sukenik, the IAA’s curator of organic finds, told The Times of Israel that every year the collaborative research group takes a trip to the Timna site to access — and marvel at — the extremely rare ancient finds. 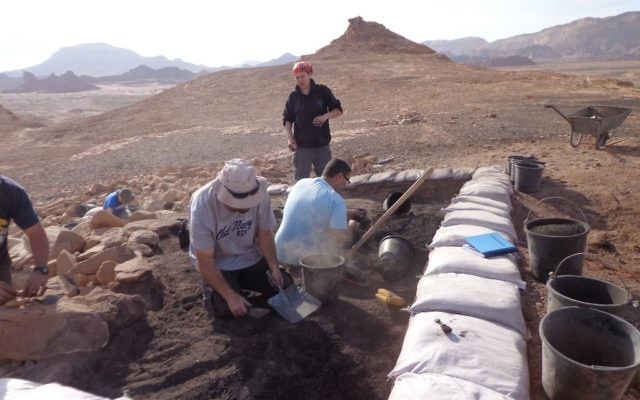 The new finds were located in Slaves Hill, arguably the largest copper smelting camp in the valley, which the team has excavated for the past six years. While excavating, the archaeologists discerned tiny pieces of textiles of many types emerging from the ground. Some were derived from rough tent coverings, some from sacks, and some of the pieces were brightly colored.

Sukenik said the team noted the brilliant purple peeking out on three of the many scraps of textiles excavated that year.

“We saw a few pieces in which the shade was really special. We really wanted it to be argaman [true purple], the most expensive dye in the ancient textile industry,” Sukenik said.

From field to lab

The textile pieces were taken back to the Bar Ilan University laboratory, where it was confirmed that molecules 6-monobromoindigotin and 6,6-dibromoindigotin — unique to the murex sea snails which produce the true purple dye — were discovered on the cloth scraps after High Pressure Liquid Chromatography (HPLC) analyses, which is used to identify organic dyestuff.

According to the paper, “Identifying the organic dye colorants in archaeological textiles is a complex task due to the low concentration of the molecules in the fibers and the limited amount of material available for destructive analysis.” Hitting upon this result was a “Sisyphean task,” said Sukenik, and required very intensive work.

Upon learning that the dye was indeed the ancient true purple, Sukenik said, “Personally, it made me really happy.” She said that a trove of ancient Murex trunculus snail shells were recently excavated at the Tel Shikmona site in northern Israel, dating back to the 10th-7th centuries BCE. Being organic material, one of the Timna cloth pieces was also sent for radiocarbon 14 testing at a laboratory in Oxford, where the date of 1,000 BCE was calculated.

During the early Iron Age, “We already knew that there was a true purple textile dye industry,” she said, but until now, there had been no dyed textiles. According to the paper, the first archaeological evidence for use of the dye dates from the 19th century BCE in the form of murex shells.

“I’m so happy that Erez [Ben-Yosef] gave us the opportunity to peek into the clothes closet from the period of David and Solomon and see the wardrobe of the elite that lived in the period at the copper mines,” she said.

“I suppose that if we were to peek into David and Solomon’s closet we’d see similar clothing — and perhaps even more true purple,” said Sukenik. Getting hands dirty for science

Discovering that the 3,000-year-old textile scraps were dyed with royal purple was only one step of the journey undertaken by this ambitious research project. Another chapter not recorded in the PLOS One paper saw Bar Ilan University Prof. Zohar Amar visit the fish markets of Italy to conduct experiments on the three species of snail.

The three species of snail are endangered in Israel and Amar told The Times of Israel that he couldn’t obtain enough samples to truly conduct his experiments. So he took himself to Milano, which holds the largest fish market in Europe. There, the snails are eaten as part of the varied Italian diet and two of the species — Spiny Dye-Murex (Murex brandaris) and Banded Dye-Murex (Murex trunculus) — are plentifully traded in the market. Amar rented a laboratory and hired local staff to conduct hundreds of experiments on thousands of snails. Each snail’s dye gland, he said, only holds a minuscule amount — circa one gram. So he ordered a massive supply, which arrived in special refrigerators that kept the snails fresh and alive.

Even in ancient texts such as the writings of the Roman author Pliny the Elder and the Jewish Talmud, it was emphasized that the snail glands be procured fresh, which creates the best dye. Amar said, having used dried glands that were shipped to Israel in some experiments, he can now vouch for the value of fresh specimens.

The glands were traditionally dried in the sun, but Amar imported an oven from Israel to speed up the process.

“It was very hard work, very stinky,” he said, much like working in a fresh fish market, he said.

The Italian fishermen who delivered the snails “thought I was a bit crazy. What they ate, I threw away, and what they threw away I used,” he laughed.

Two thousand years ago, the rabbis discussed how impure creatures such as the sea snails — forbidden from an observant Jewish diet — could be the source of a dye used in such sacred spaces as the Tabernacle and Temple.

Amar answered that through his experimentation with the snails, he realized that nothing of the meat of the snail remains. Through the chemical processing of the snail glands into dye, “the material turns into something else.” While two of the species were in plentiful supply, locating the third species saw Amar take out the big guns — his Italian mother in law. With her help, the third species, Red-Mouthed Rock-shell (Murex haemastoma), was sourced in Palermo, Sicily. He traveled to the Mediterranean’s largest island, only to be disappointed when inclement weather caused the fisherman to come back without a catch. Only after a subsequent trip could he successfully harvest the third snail’s dye glands.

Although Amar had studied the theory behind the preparation of the true purple and associated azure dyes, “in conducting in the practical work I learned a lot about the historical sources. It was like time tunnel to the past,” he said.

He conducted his initial experiments bare-handed, only to discover that the dye that lasts millennia on archaeological artifacts quickly stained his hands blue for weeks. He said that it gave insight to a Gemara passage that had always mystified him: The Gemara relates that when priests go in front of the congregation to give the traditional priestly blessing, they cannot have discolored hands. And if they do, it is only permissible for them to give the blessing if the entire congregation is likewise dyed. After walking around with blue hands for a couple weeks, he understood just how distracting people found it.

“When I returned home on the plane, I had to hide my hands,” Amar laughed.