Home TourismBiblical Sites TOMORROW! Visit the Town of the Relatives of Jesus

TOMORROW! Visit the Town of the Relatives of Jesus

Jesus didn’t spend much time in Jerusalem, but there was one “big city” with which he was undoubtedly familiar – Zippori, ornament of the Galilee.

On this virtual ZOOM tour we will walk through Zippori and get a glimpse of lifestyle and region where Jesus and his family grew up.

The name of the town Zippori comes from the Hebrew word tsipor which means “bird,” presumably for the birds-eye view overlooking the Galilean range. The historian Josephus described the town as “the ornament of all Galilee.”

In the times of Mary and Jesus, Zippori was the administrative capital of the Galilee, and enjoyed all the conditions needed to thrive: a central hill for protection, fertile valleys for agriculture, a main road connecting it to the cities of Acco and Tiberias, and sources of fresh water.

No wonder it was called “The Big City” of the region during the Roman period. Villagers from area would come to get services and buy goods. Among them, people from the very small and hardly notable village of Nazareth, just 5 miles away. Did Yeshua from Nazareth visit Zippori? It is very likely. Tradition says that Zippori was the hometown of Mary’s parents Anna and Joachim. If indeed Jesus’ grandparents lived here, he must have walked the streets of Zippori visiting with family. 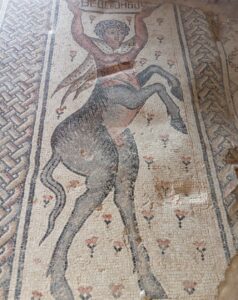 Magnificent mosaics have been found throughout Zippori, attesting to the city’s affluence. Photo: Sharona Liman

What did he see, and think about as he walked through the town’s streets? Did he stop in the middle of the road to play a board game engraved in the rock? What would he have through of the town’s theater? Surely he would have visited in one of the city’s 18 synagogues. Maybe the one with the mosaic zodiac as a central ornament?

Zippori continued to thrive and develop for seven centuries after Jesus. Romans and Jews, Paganism and Torah, and the philosophical debates over Body and Spirit all dwelt here side-by-side. Mansions and public buildings were decorated with mosaics of the highest quality often depicting Greek-Roman mythology. At the same time Zippori was a center of Jewish religious and spiritual life. Rabbi Judah lived in Zippori for 17 years until his death, and it was here around 200 CE that he compiled the Mishnah, the first major written work of rabbinic literature.

On our virtual tour of Zippori we shall walk through the water system, the Jewish neighborhood, the fort, and the market. We will also visit a synagogue, the “Nile house,” and “Dionysus house.” Everywhere we turn we will see amazing mosaic floors, and all around us enjoy the views and scenery that Mary and Jesus experienced from childhood.

This is an event for israeltoday.co.il members scheduled for Tuesday, December 15.

KATZRIN: ANCIENT VILLAGE IN THE GOLAN