What you’ll see at the Israeli innovation museum in Jaffa

Former Israeli Prime Minister and President Shimon Peres wore many hats over his decades-long career in local politics. He was the defense minister responsible for Israel’s nuclear energy program, the architect behind the Oslo Accords and winner of a Nobel Peace Prize, and Israel’s leading technology cheerleader, tirelessly promoting the Startup Nation.

This final chapter of Peres’s life – he passed away in 2016 — became the inspiration for a new museum focusing on Israeli innovation.

Located within the sprawling 14,000-foot Peres Center for Peace and Innovation in Jaffa, overlooking the Mediterranean, the Innovation Center takes a fittingly high-tech approach to the technology world that Peres championed. 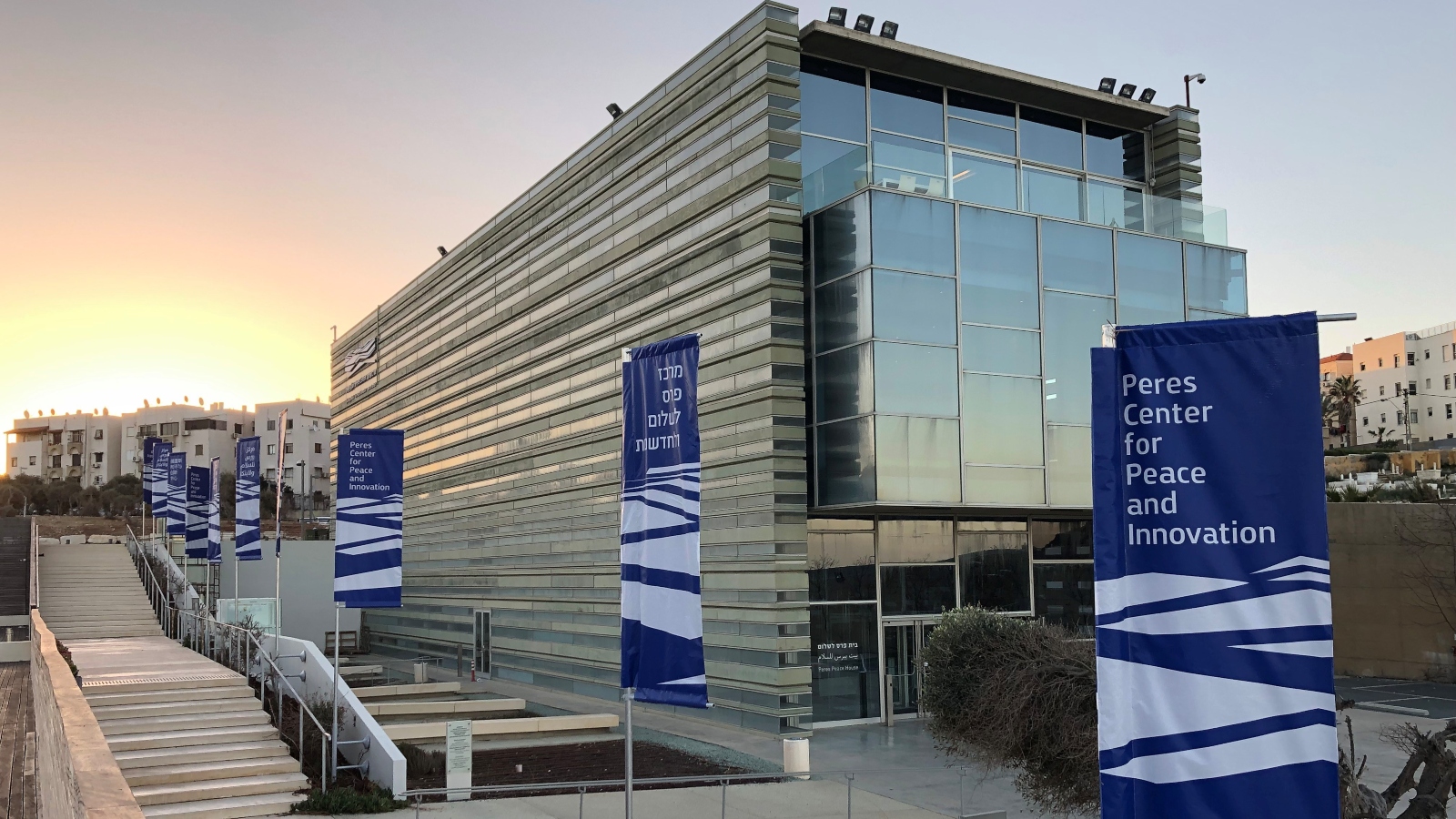 The Peres Center for Peace and Innovation in Jaffa. Photo: courtesy

The Innovation Center soft-opened opened earlier this year and is now ready to welcome the public. Tours must be booked ahead.

A guide will walk you through five exhibit rooms, most of them with interactive elements.

The first stop is perhaps the most impressive: a hall lined with 18 life-sized video avatars of Israeli entrepreneurs who have made their mark on Startup Nation.

Among the tech celebrities on display: Uri Levine, founder of traffic app Waze; Dov Moran, whose company M-Systems created the disk-on-key; Hossam Haick, inventor of “Na-nose” technology that can sniff out cancer and other diseases; and software guru Kira Radinsky, now the chief scientist of eBay’s Israel operations. 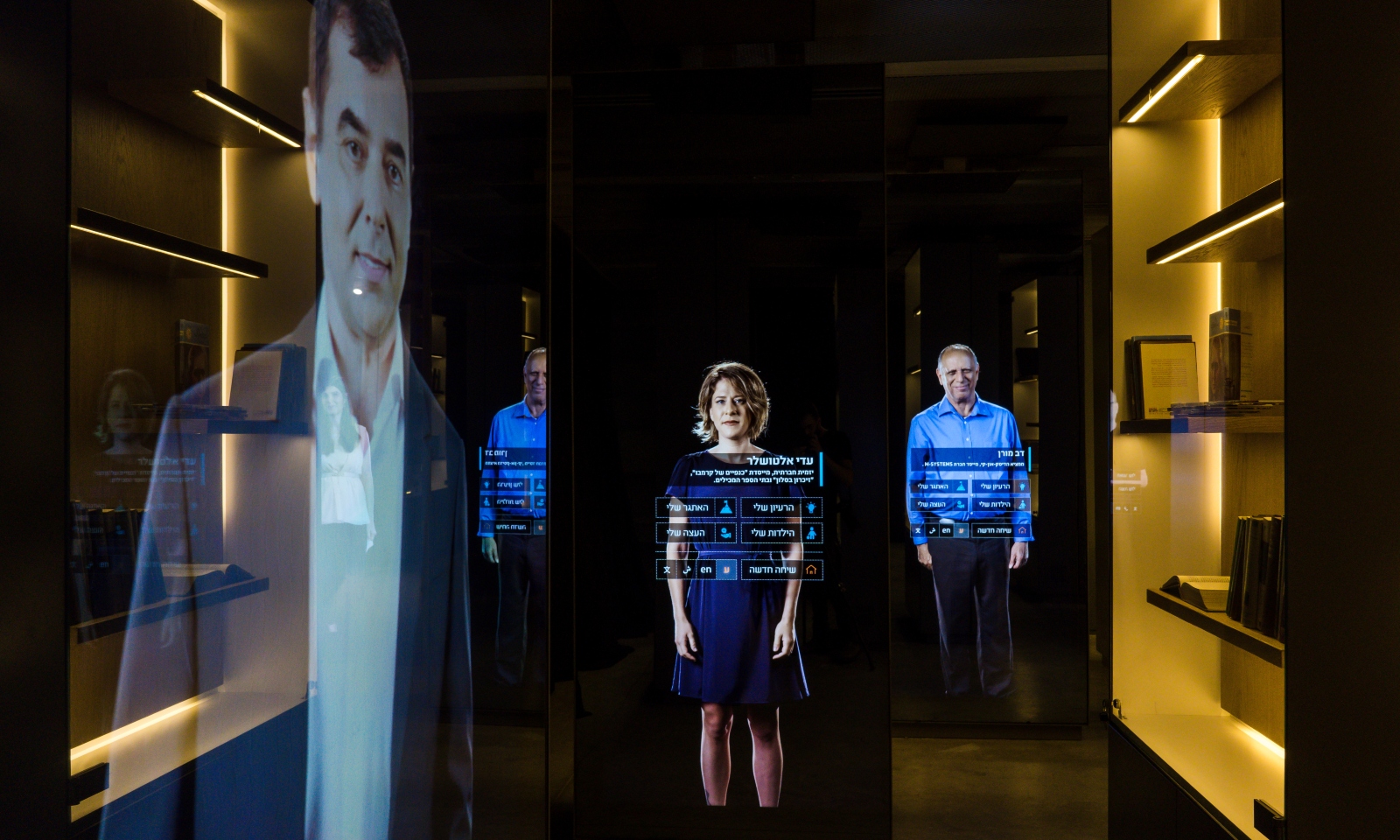 Tech celebrities featured in life-size at The Peres Center for Peace and Innovation in Jaffa. Photo by Matan Katzman

Standing opposite the video entrepreneurs in the hall is eerily like speaking to them in real life. You can choose from four questions for each entrepreneur by touching the screen. How did they come up with their idea, what was their childhood like, what challenges did they face, what advice do they have to give budding entrepreneurs?

The next stop is a replica of Peres’s office from the time he was Israel’s ninth president. This is the only no-touch room, but there is a video about Peres’s life playing behind his desk.

In Stop No. 3, you can explore all the fields of Israeli innovation and find out which startups are hot in automotive tech, agritech, medical devices, cybersecurity and more. 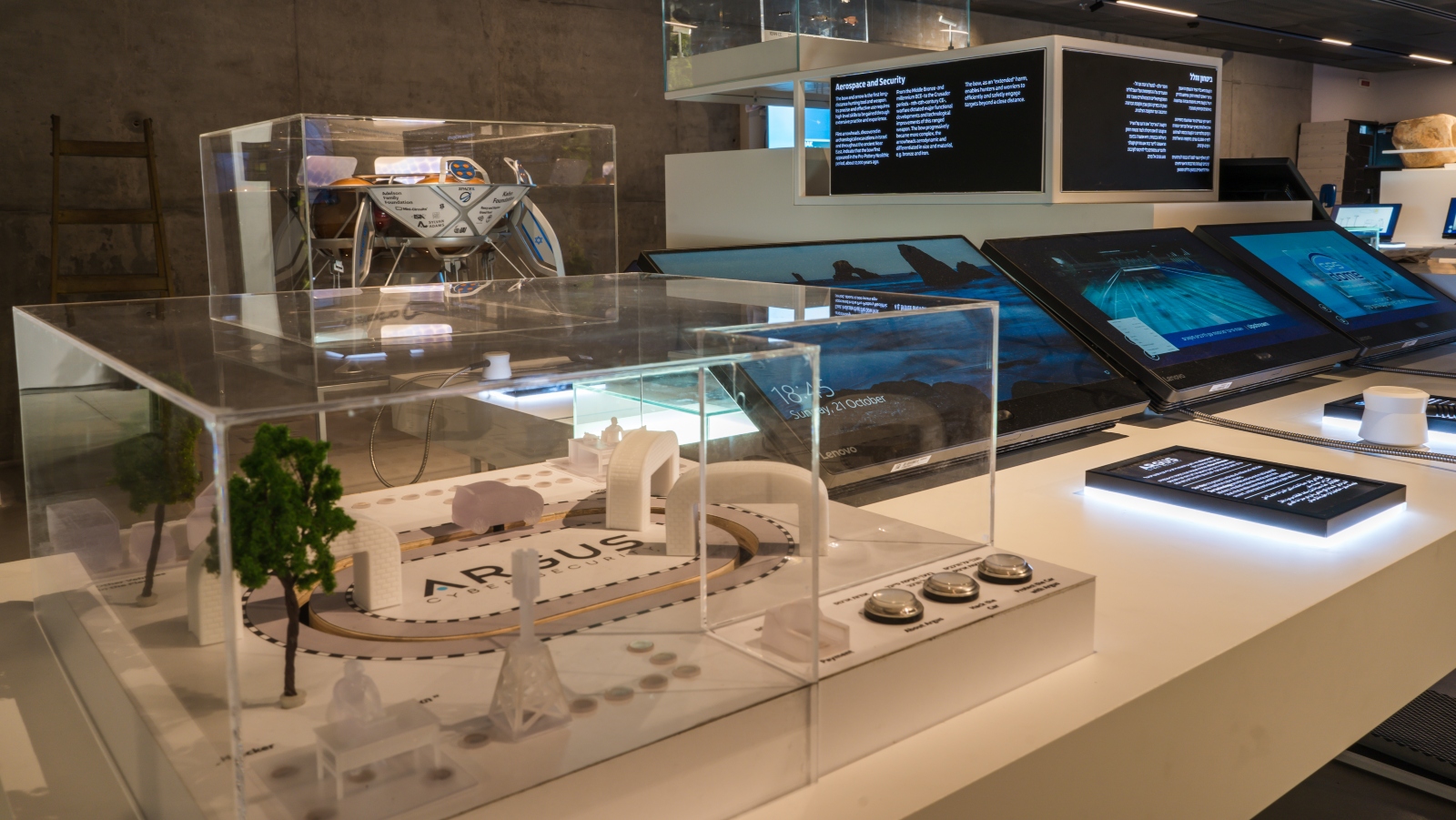 Aerospace and security innovation display at The Peres Center for Peace and Innovation in Jaffa. Photo by Matan Katzman

An interactive dial highlights specific companies and their connections according to a wall-sized timeline. In the middle of the room are touchscreen games including a trivia challenge where your knowledge of Israeli high-tech is the essential ingredient.

Then it’s off to the future in “The Capsule,” courtesy of virtual reality and Israeli VR content studio Inception. Strap on an Oculus VR headset and you’ll get a taste of where Israeli innovation could lead next. 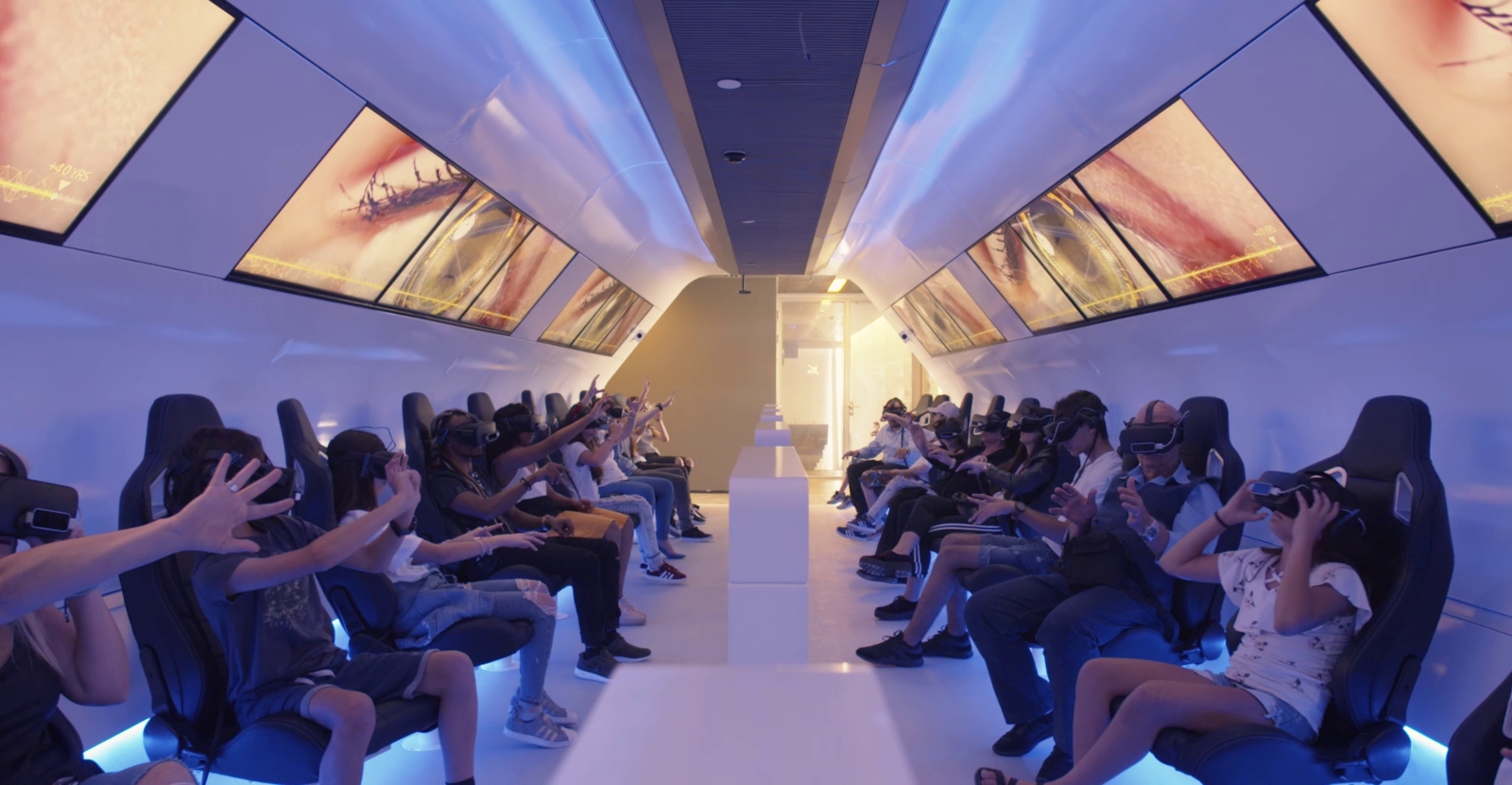 The Capsule at the Innovation Center of the Peres Center for Peace and Innovation, Jaffa. Photo by Boaz Rabinovich

It’s a bit kitschy – you start by riding an Israeli-made spacecraft where you’re instructed to virtually “grab” pieces of equipment that are now floating weightless – but for VR newcomers, it’s an evocative introduction.This room was designed with input from best-selling author Yuval Noah Harari and futurist Roey Tzezana. 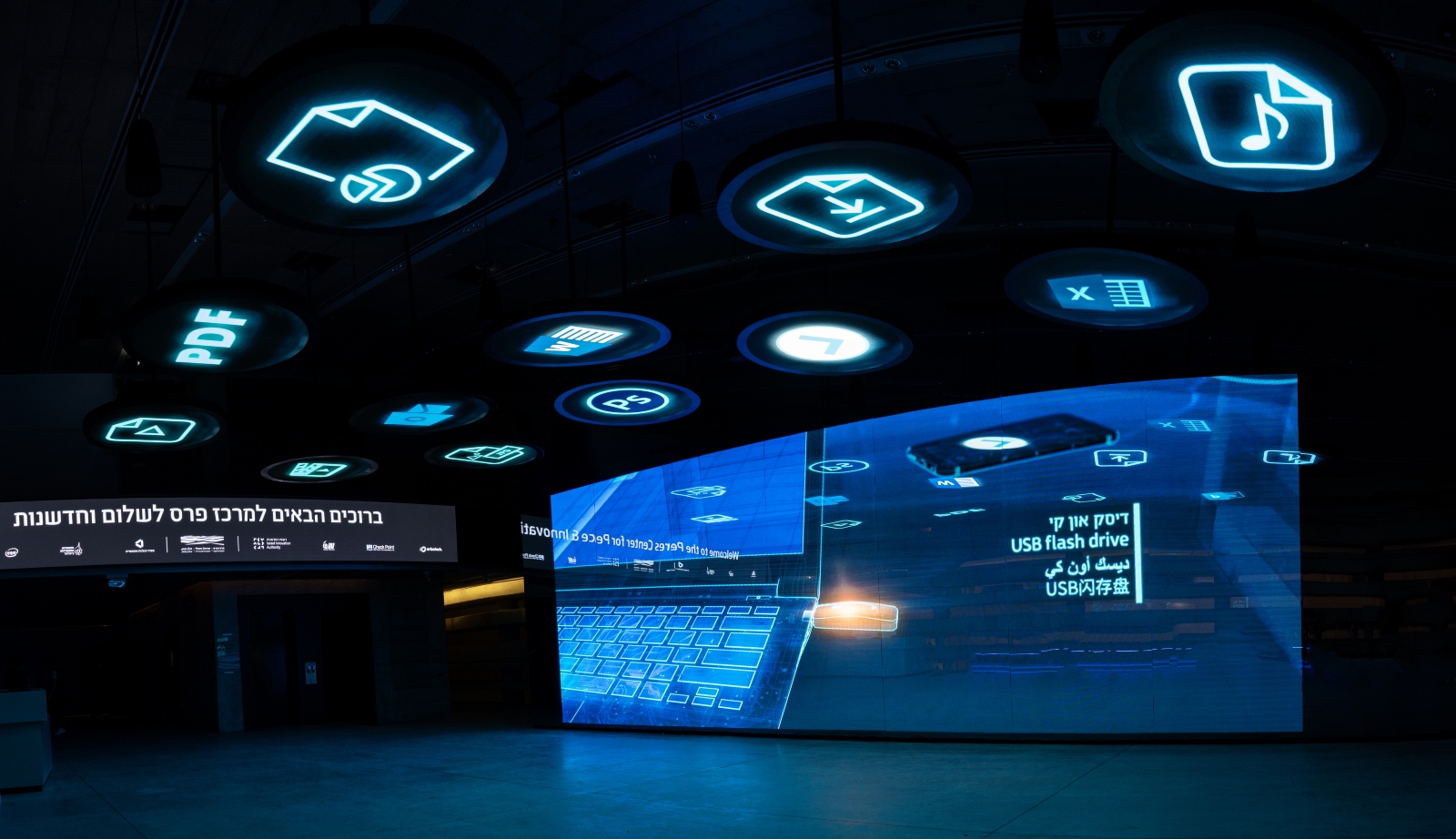 A display about the USB flash drive at The Peres Center for Peace and Innovation in Jaffa. Photo by Matan Katzman

Your guide may even offer you a taste of mass-produced kosher grasshopper from HargolFoodTech. (Hint: it’s crunchy and definitely doesn’t taste like chicken.)

The modernist building’s design itself is part of the innovation message. Constructed out of layers of concrete, glass and aluminum, it “purposely does not draw any cultural references so that all visitors come on an equal footing and nobody feels more at home than anyone else,” a spokesperson told ISRAEL21c. 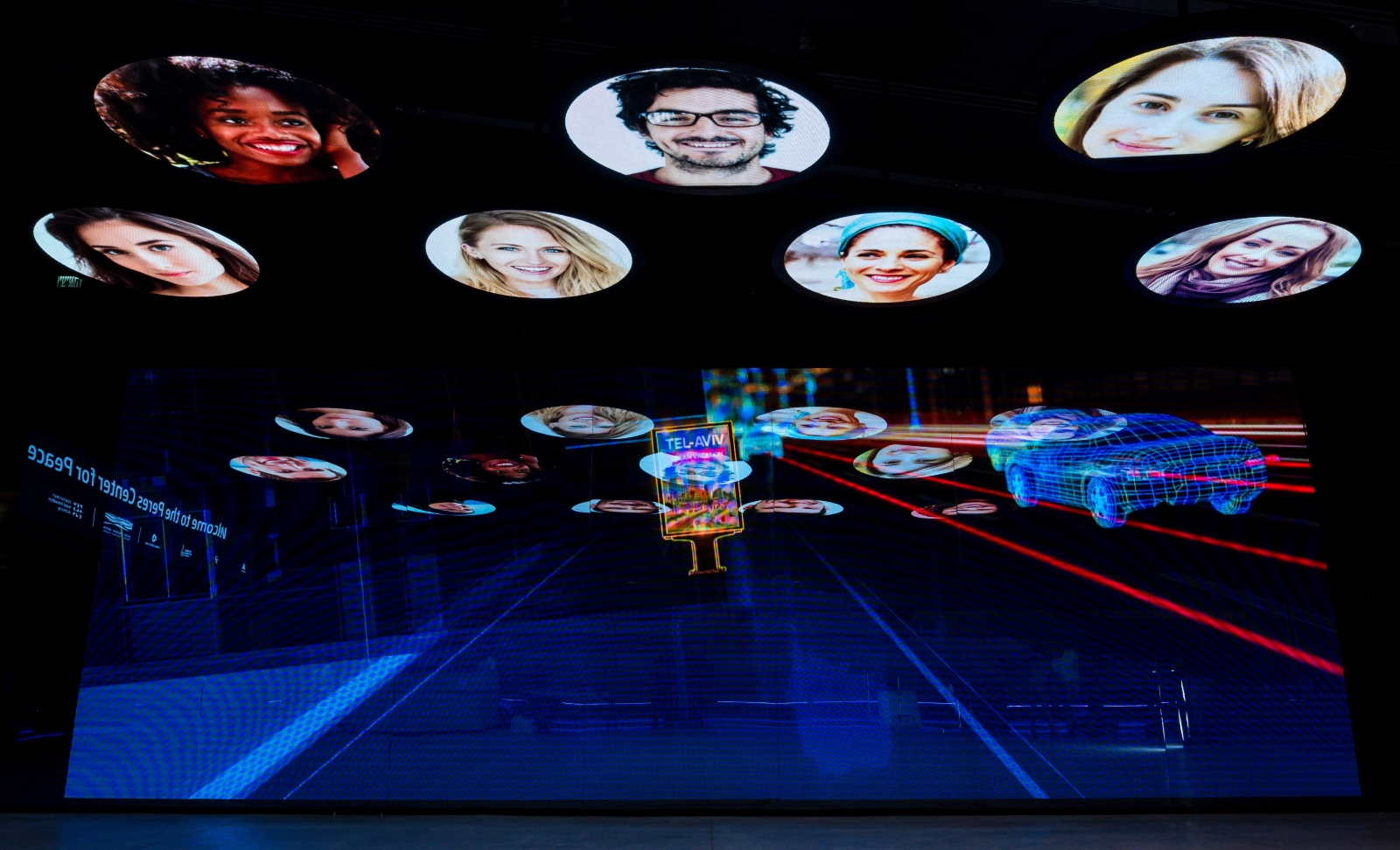 Inside The Peres Center for Peace and Innovation in Jaffa. Photo by Matan Katzman

The entire experience can be summed up by the sign appearing as you enter: “Dream big.”

The Innovation Center has text and audio in English, Hebrew, Arabic, and Chinese. Open Sunday through Friday, the price for tickets booked online is ₪44, with discounts for students, seniors and people with disabilities (the center is fully accessible).

It’s a slightly off-the-beaten-track travel destination that is well worth a visit for anyone aged 10 and up. The center is accessible by public transportation and there’s free parking.

The Peres Center for Peace was founded in 1996 and moved to its current location in 2009. It receives support from the Israeli Innovation Authority, the Israeli Ministry of Economy and Trade and corporate partners including Checkpoint, Israel Aerospace Industries, Orbotech and the Manufacturers Association of Israel.