Home Culture In Israel, it’s knafeh that takes the cake

In Israel, it’s knafeh that takes the cake

It may look like a hip espresso bar, but Kanafanji specializes in knafeh (also spelled “kanafeh”), a dessert made with shredded vermicelli-like pastry noodles (kadaif) moistened with clarified butter, covered with crumbles of sheep or goat cheese and seared on both sides until golden. Before serving, the knafeh is showered in spiced heavy syrup.

The restaurant/bar with its reasonably priced local beers bears the motto “Live, Laugh, Love, Knafeh” – a strangely fitting concept for a dessert held dear by locals of all descents. If you like knafeh, you probably love it with a capital L. 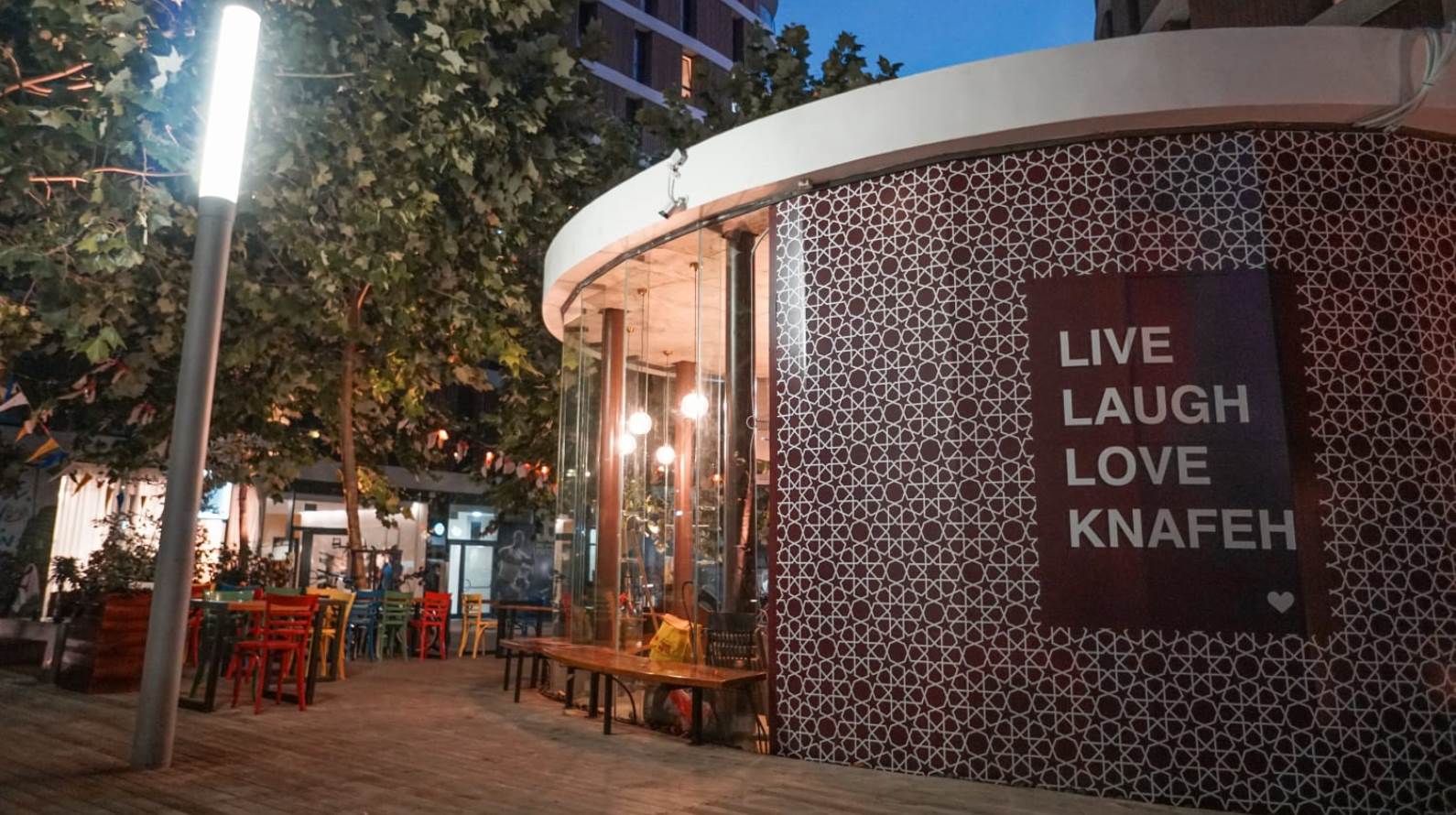 The traditional dessert is usually cooked in deep sheet pans and served warm. It takes a certain skill to master knafeh’s artisanal elements and its fans are fanatical and often unforgiving.

The sweet has become part of modern Israeli cuisine that embraces ethnic dishes, knafeh is more accessible and open to interpretation from home cooks, restaurant chefs and hipsters alike. 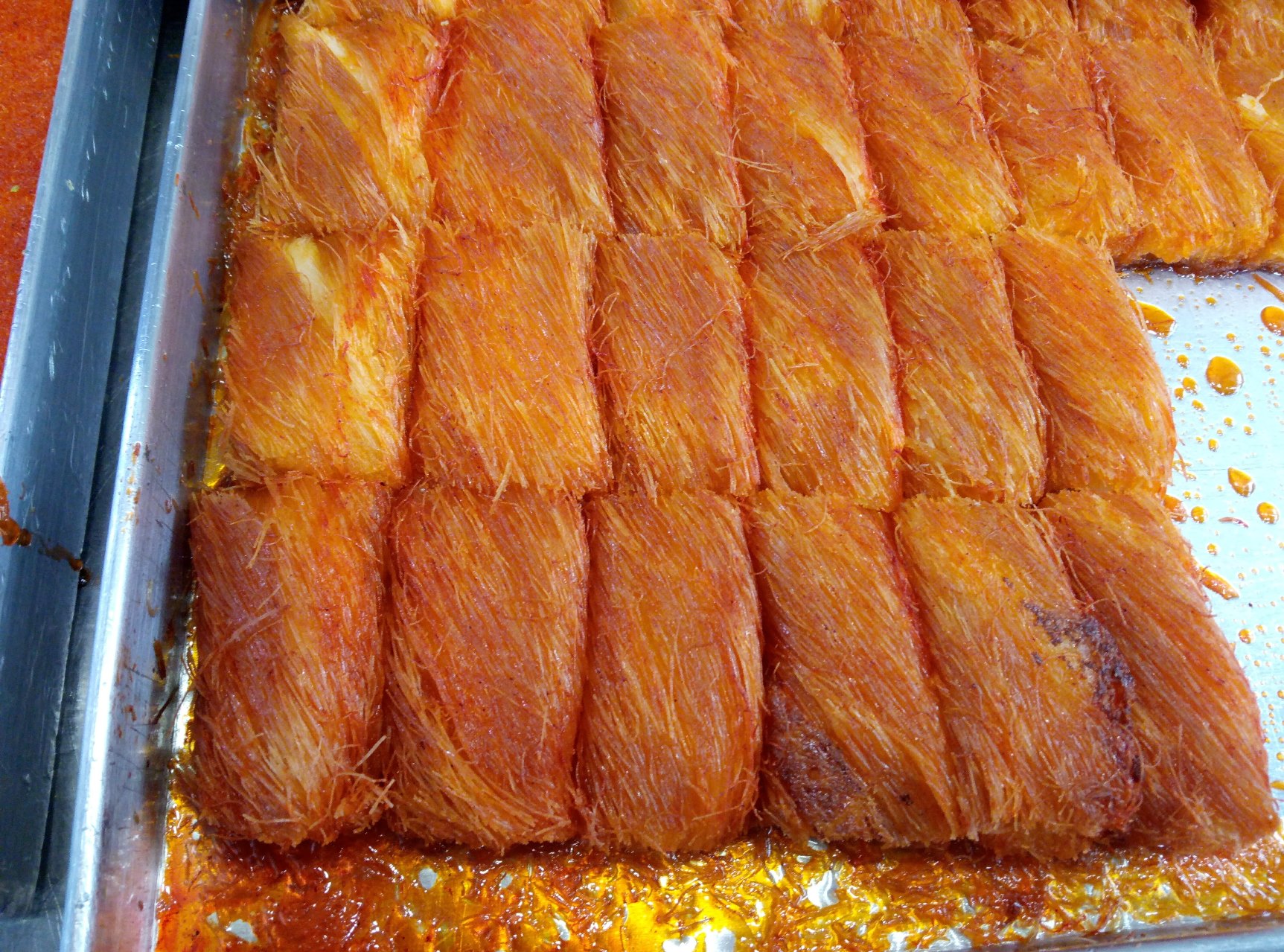 Knafeh for sale at Mamtakei Kashash in Akko Market. Photo by Jessica Halfin

Varying from country to country, village-to-village, and even household to household, knafeh recipes depend on a few key flavors and raw materials:

Kadaif flour-and-water noodles (or “hairs,” as they are referred to in Hebrew) are best made by master artisans. The high-quality kind are produced in specialty factories from batter poured through a sieve or draped with a special tool onto a moving heated circle that quickly cooks the angel hair-thin strands as they spin.

Goat or sheep cheese is essential. The most classic choice for making the type of knafeh enjoyed in Israel is Nabulsi (Nablus), a soft-brined cheese that is firm yet has the ability to melt.

Because Nabulsi is hard to find outside of the region, many recipes call for mozzarella in combination with a softer cheese to try to fake the unique way Nabulsi cheese reacts to heat. Alternatively, other goat or sheep cheese of similar texture can be used in the dish, or even fresh ricotta, which is often used in knafeh that comes in the form of a rolled log.

Samneh (ghee) is clarified butter, heated in a saucepan and skimmed off the milk solids that float to the top, leaving pure butterfat behind. This striking golden liquid is much richer than ordinary melted butter, intensifying the buttery flavor of the knafeh.

Heavy syrup spiked with spices, citrus, and sometimes perfume-like floral extracts are poured generously by bakeries over pastries such as knafeh and baklava just out of the oven. It soaks through the pastry to soften it, seal in the freshness, and yes, even weigh it down a bit since many bakeries sell their baked goods by weight.

Pistachios are a sign of prosperity and provide a stark color contrast to the bright orange kadaif on top of the knafeh. When peeled, soaked, removed of their brownish skins and chopped finely, these chartreuse-hued nuts, which can cost up to $40 per kilo, really gussy up the dish.

Each kind has a syrup that varies in taste. No matter the combination of spices — no doubt including cloves, cinnamon, and lemon — they all have a 1:4 ratio of water to sugar. The shocking sweetness of Arabic sweets is a stark contrast to the dark espresso often served alongside.

In whatever form, variation, or influence, as an afternoon snack, or honorable gift or dessert to mark a special occasion, knafeh is beloved by most people who taste it.

BEST PLACES TO VISIT IN ISRAEL DURING CHRISTMAS