Only about 40 minutes from Tiberias, this is an amazing place to visit if you are curious about the Arab-Israeli conflict and military battles, or just want to take in a stunning view!

Mount Bental, like much of this area in the north of the Golan Heights, is strewn with its signature grey ballast stone, part of the remains of long-extinct volcanoes. Mount Bental is actually one of two craters of an extinct volcano and stands an impressive 1,171 meters above sea level, offering some of the most spectacular views in the region.

Atop the mount is a now disused Israeli army outpost, complete with old Israeli bunkers. Visitors can descend the steps into the underground living quarters, providing a stark insight into life on the Israeli front lines and a view out onto the Kunetra Valley (meaning Valley of Tears). This valley was the location of the bloodiest tank battle during the Yom Kippur War of 1973 where Israel, vastly outnumbered by Syrian tanks, succeeded against all odds in blocking the Syrian advances. 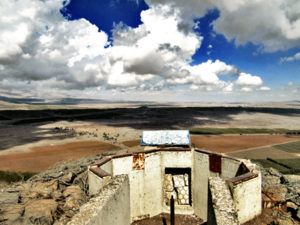 But aside from the bunkers, the main draw for ascending this mountain is the breathtaking views. To the north visitors will be treated to the sights of a snow-capped Mount Hermon (snow-capped in the winter only!) which rises a staggering 3,000 meters above sea level. To the south, the view extends out towards the southern Golan and the Syrian approaches to the Heights with Damascus situated a mere 60 miles away.  The outlook also offers a bird’s eye view of many of the Druze villages which sit below and in the distance, the crests of the mountain ranges in the Upper Galilee can be seen.

Mount Bental is currently maintained by Kibbutz Merom Golan, which was the first Kibbutz to be established in the area following the 1967 Six Day War. On the route to the peak of the mount be sure to keep an eye out for the wonderful set of sculptures made out of steel by one of the members of Kibbutz Merom Golan.

Thankfully, recent renovations to this amazing site have made it very accessible and a site to definitely add to your list. The path to the top has been repaved whilst the tourist facilities have also been rejuvenated.

Once at the top of the mountain there is also no need to worry about satisfying any hunger pangs as the Kofi Anan Cafe (a clever play on words meaning Cloud Coffee, while obviously tipping the hat in the direction of a certain former UN Secretary-General) serves a delish range of cakes and coffee whilst also taking the title as the highest cafe in Israel. Also, it’s a great place to hide out if you’re there in the winter, as the icy winds can burn your ears! 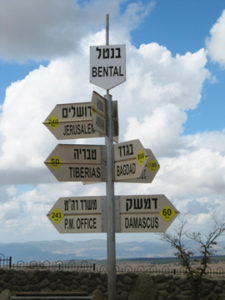 For those visitors interested to find out more about the mount but who don’t bring their own guide, the Golan Regional Council makes an informative electronic audio guide available. The guide provides interesting information about the area surrounding the bunkers.

Although the area doesn’t receive as much tourism as other locations in Israel due to being a bit too far north and also due to generally poor roads, Mount Bental is easily accessible and is more than worth the journey for its sprawling views which are some of the most rewarding in the country.

A trip to Mount Bental holds the promise of being one of the most interesting and remarkable part of any trip to the Golan Heights and indeed Israel.

Originally posted at I Googled Israel.