Home Tourism 10 of the most spectacular desert hikes in Israel

The best time to hike in Israel’s Negev and Arava deserts is right now. It may be cold in the north, but the temperature is just perfect for climbing the rough-and-tumble mountains of Israel’s south before it heats up for the summer. So, in the spirit of spring, here are Israel’s top 10 desert hikes.

This is the quintessential tiyul (trip) for hikers staying at the Eilat Field School. Starting from just east of the building, it’s also the southernmost tip of the 1,000-kilometer Israel National Trail. The Field School is on the road that leads to the Egyptian border at Taba.

The hike starts with a pretty steep ascent (you’re starting at sea level and climbing straight up), and it’s not particularly beautiful, but once you get to the top, the payoff is a spectacular panoramic view of the entire Red Sea area. In fact, you can see four countries from a single vantage point – Israel, of course, but also Jordan, Egypt and the tip of Saudi Arabia. Once you’ve taken in the view, there are several options for the descent. If you take the longest option (about four hours), you’ll end up near Taba; you can then take a bus or taxi back to your car. 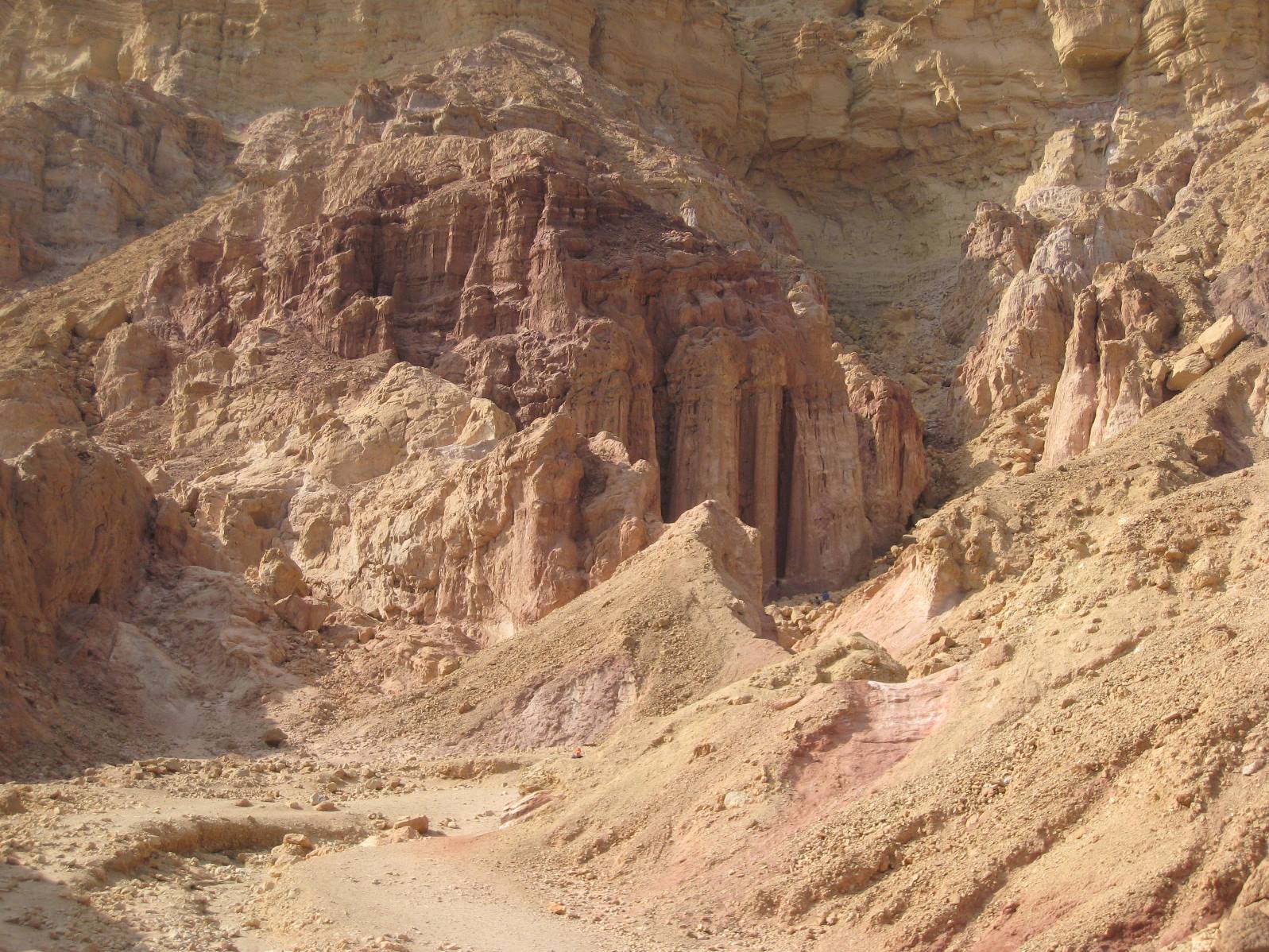 Amram’s Pillars is a natural rock formation at the end of a short canyon. Photo by Brian Blum

You don’t have to trek the entire Israel National Trail to hike some of its most beautiful parts. Drive north from Eilat on Highway 90 about 15 minutes and take the turn toward Amram’s Pillars. It’s another 15 minutes on a bumpy dirt road. You’ll need two cars for this hike – when the road splits, drive about two miles to the left and park one car near the Black Canyon. Double back and leave the other car near Amram’s Pillars, a natural rock formation at the end of a short canyon. (The back and forth shuttling of the cars can take up to an hour, so build that into your total hiking time.)

After you take in the pillars, continue up Mount Amir to its peak where you’ll be treated to some great views. As you descend, catch the Israel Trail going south to get to your other car. An alternative route goes through a canyon filled with ancient copper mines and digging shafts. Either way is three hours. 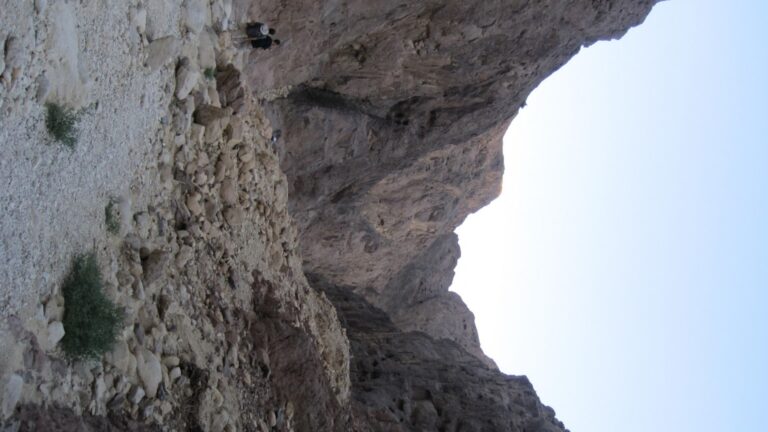 Follow the instructions for Amram’s Pillars and leave your car at the end of the junction heading south. The kilometer-long Black Canyon is filled with gray and black basalt stone formations, white limestone chalk, plus some narrow passageways that are fun to climb and slide through. It’s shady even at midday.

The Black Canyon is a loop. The best way to hike it is from the back so that you slide down the passageways rather than climb up. (You can do it either way, however.) You can do the entire loop in about two hours. If you’re feeling ambitious, tack it on to the Amram’s Pillars hike. 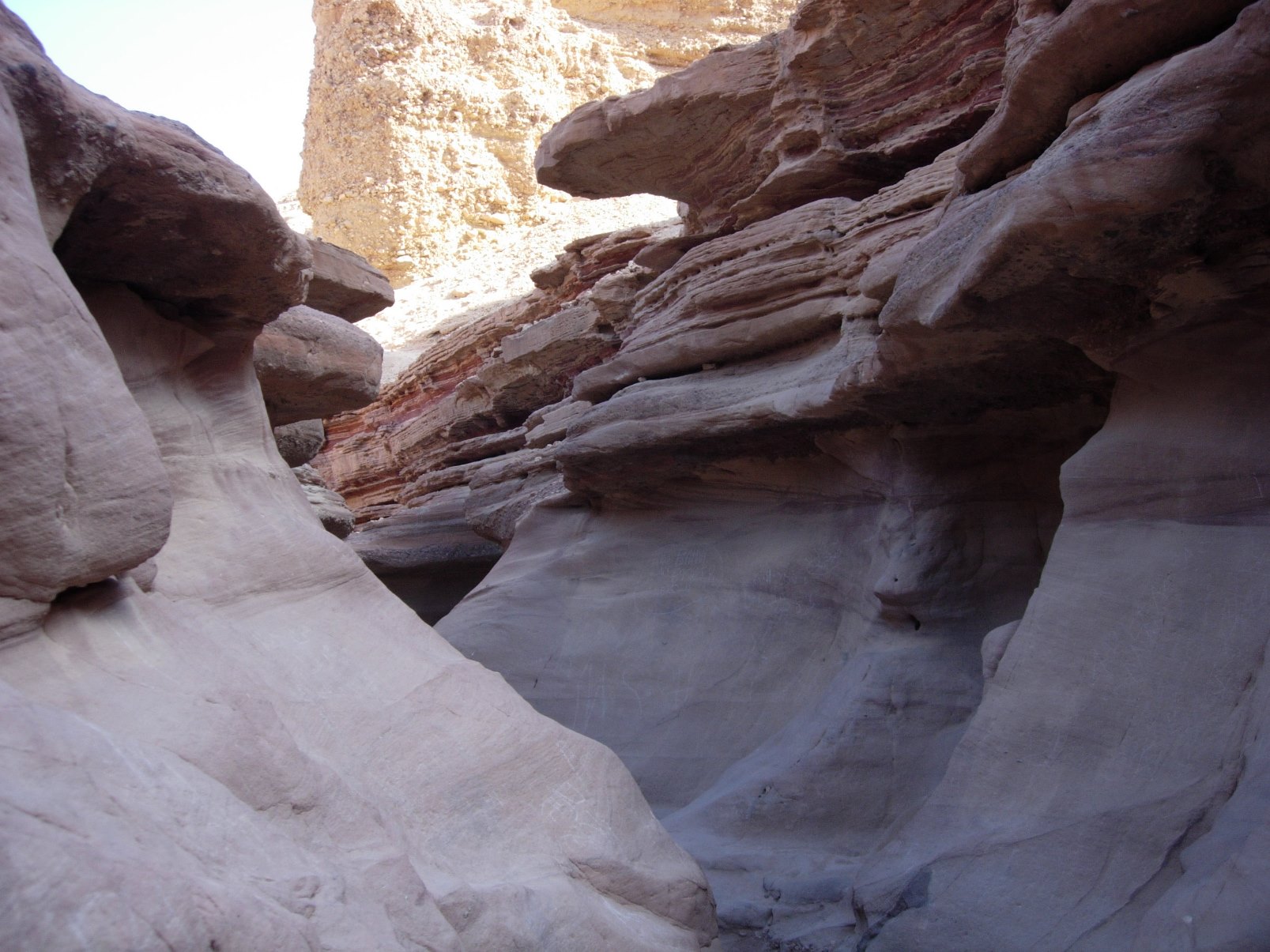 The red in Red Canyon is from Nubian sandstone. Photo by Brian Blum

Head north from Eilat on Highway 12 until you see signs for the Red Canyon, which is, as its name implies, unquestionably red from the Nubian sandstone. You start by descending into the canyon (there are several points with ladders). Be ready for a “traffic jam” at peak hiking periods because the canyon is not wide enough to allow more than one person to pass at once.

The canyon itself is relatively short; the rest of the walkthrough Nahal Shani is less scenic and without shade, but has a challenging finish involving a steep climb for some amazing views into Egypt. This is a loop trail that takes three hours. When you return to your car, take advantage of the ice-cream truck, which is usually parked there. 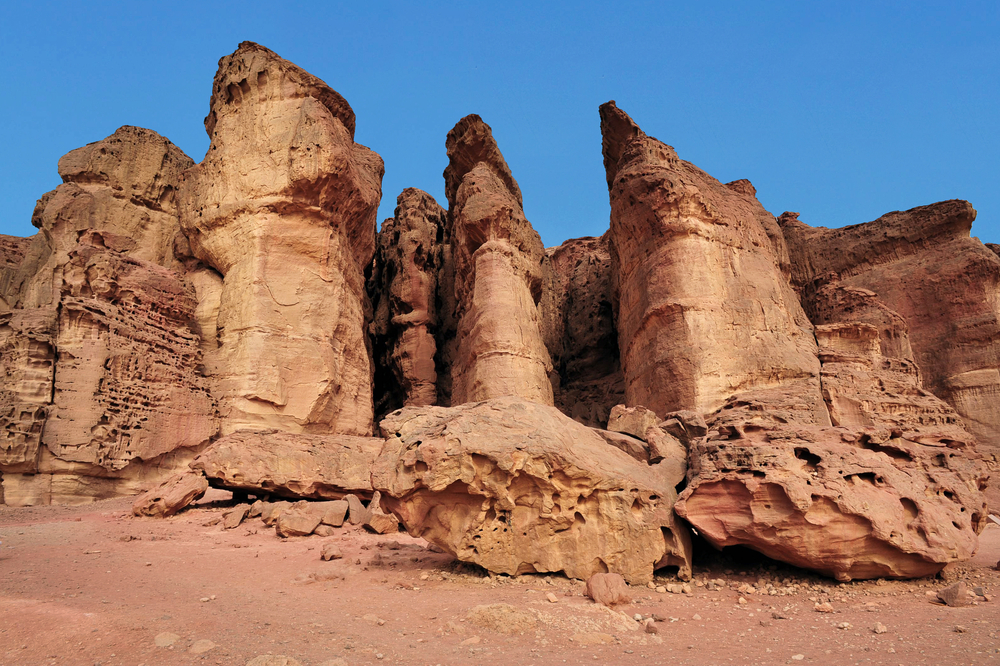 There’s so much to do and see in Timna Park (off Highway 90, north of Eilat), your best bet is to simply arrive early in the day, grab a visitor’s map at the entrance and decide what you’re in the mood for. You can drive to Solomon’s Pillars – two rock formations formed by centuries of water erosion through fractures in the sandstone cliff – and walk around, peering into all the nooks and crannies. Or you can follow a more challenging four-hour path that goes above the pillars for some great views. It’s only 2.5 miles but there are some steep ups and downs.

For a more family-oriented hike, visit the Pink Canyon, which leads to the “Roman Cave” – actually, an old structure with a Nabatean burial inscription. Even easier is the 45-minute hike to the Boreg (Corkscrew) Hill. The only downside to Timna: there’s an entrance fee, so coming back again over several days can get expensive. 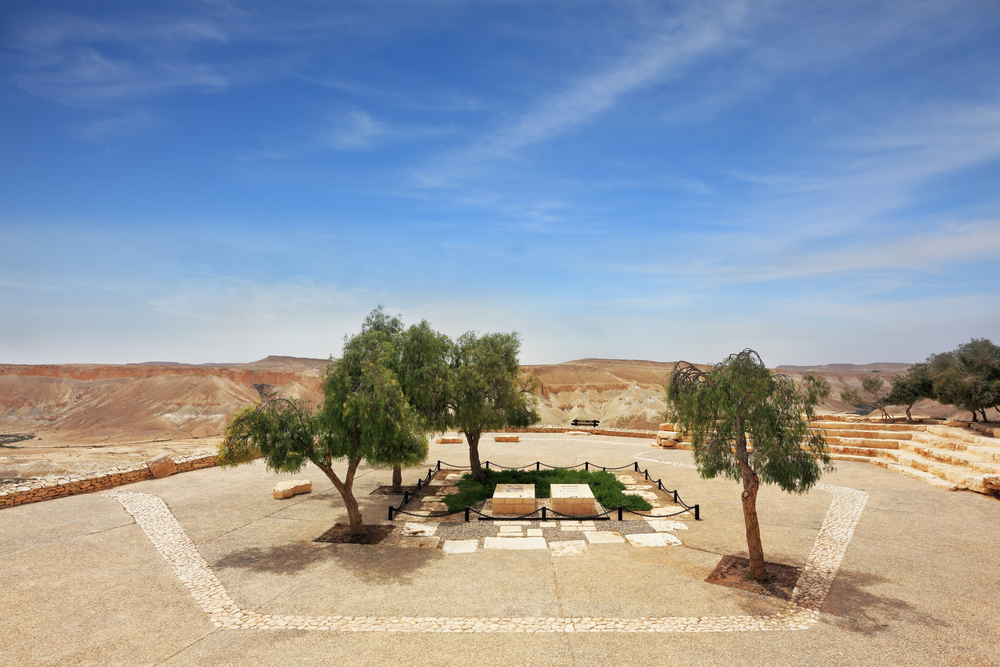 A short, lovely hike begins at the graveyard of David Ben-Gurion. Photo by www.shutterstock.com

Many visitors to Israel’s south pay a pilgrimage to the grave of David Ben-Gurion, the country’s first prime minister, on their way to Mitzpeh Ramon or Eilat. If you’ve already stopped at Sde Boker, the kibbutz where Ben-Gurion lived, there’s a short and lovely hike starting adjacent to the gravesite into Ein Avdat, a canyon filled with surprising springs and waterfalls – a hidden desert oasis!

Ein Avdat is named for Nabatean city that was located on the ancient spice route. On the hike, which is part of Nahal Zin, you’ll pass several caves that were used by Byzantine monks starting in the sixth century as well as an observatory at the upper end. Expect to commune with the local ibex. The one-hour trek is not a loop, but it can be done in only one direction, so if you can park a second car at the second parking lot at the end, you’ll save having to walk back on the less scenic road above the canyon. Getting out of the canyon requires climbing ladders.

Nahal Peres is the arguably the most challenging hike on the list – it takes six to eight hours to complete and includes some steep climbs. But it’s an Israeli classic that includes desert cliffs, waterfalls, and water holes.

The water holes are a detour about 4 miles into the trail – don’t skip them (you can even swim if it’s warm enough). Before the final ascent out of the canyon, walk a bit further to a “window” overlooking a waterfall with a fabulous view. If you only have one car, you can also switch back on a black trail just after the water holes (although you’ll miss the “window”).

One of the best reasons for hiking in the spring is the preponderance of flowers that bloom only at this time of year. Flowers are rare in most of the desert; not so in the Pura Nature Reserve (“Shmurat Pura” in Hebrew) in the very northern Negev. There’s a parking lot off Highway 40, just south of where it merges with Highway 6, and north of the Kama Junction.

The three-to-four-hour walk is mostly flat, although there is a climb to Tel Nagila, a settlement that was established in the Chalcolithic period. You’ll pass the remains of a Turkish railway bridge that once connected Beersheva with Lod, a seasonal lake, a dam and plenty of red anemones. For a different experience in the same area with less huffing and puffing try the nearby Philip Farm, which offers carriage tours pulled by donkeys. 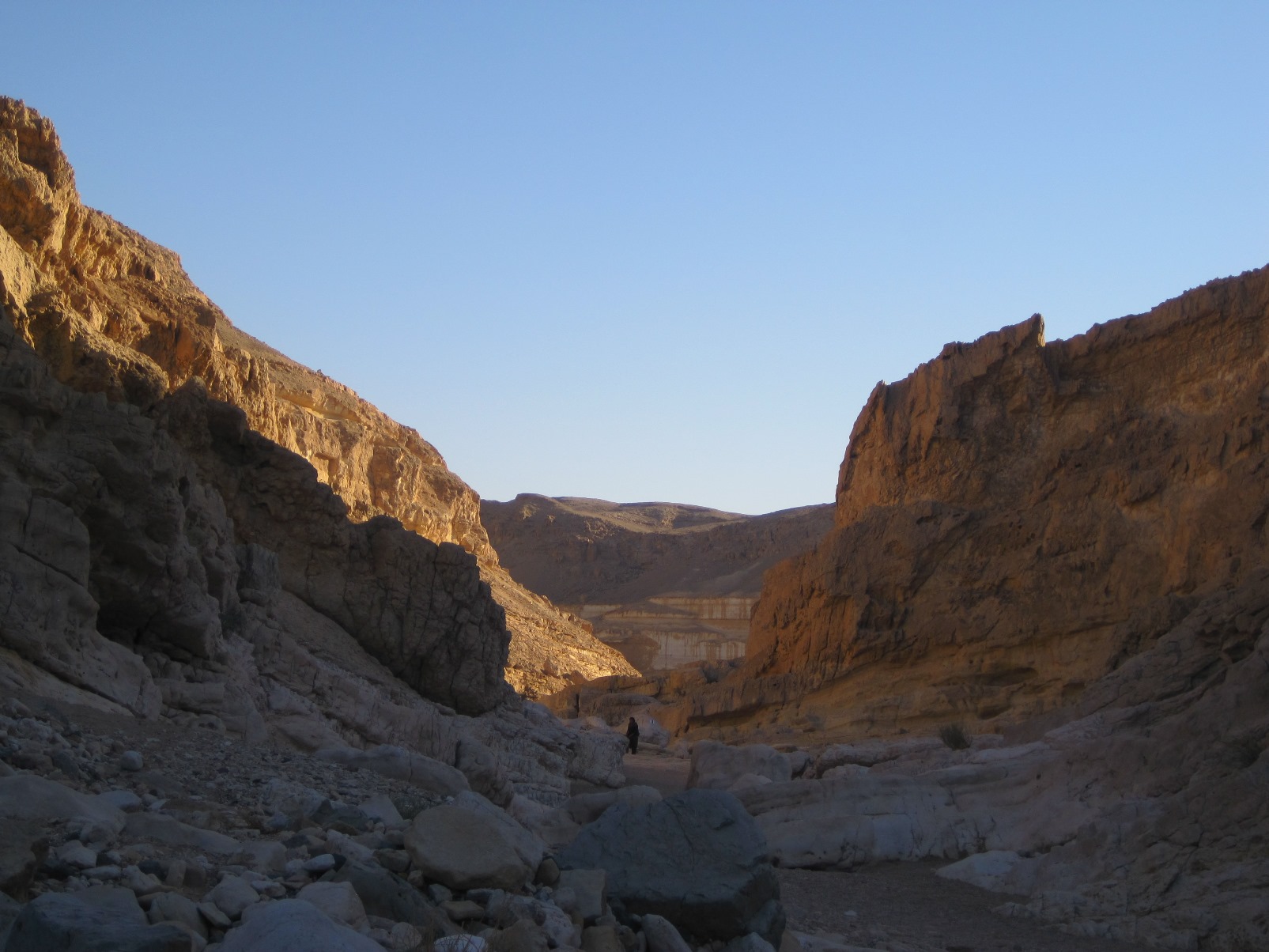 The last two hikes on the list are in the Ramon Crater. For both, you’ll drive toward the Be’erot camping site off Highway 40 in the middle of the crater. Be’erot also has a Bedouin tent serving coffee, tea, and other refreshments. For this first hike – the easier of the two – continue driving another two miles to the parking lot for Ein Saharonim. You’ll see an old Nabatean weigh station there and a spring, which is also where you’re most likely to see animals in search of water.

An ancient Nabatean caravanserai (fort) is nearby and can be explored before setting out on the hike itself – a two-to-three-hour trail on Parsat Nekarot (the “horseshoe”). The picturesque loop winds through the white limestone of the Nekarot canyon. You return to the Ein Saharonim parking lot at the end. 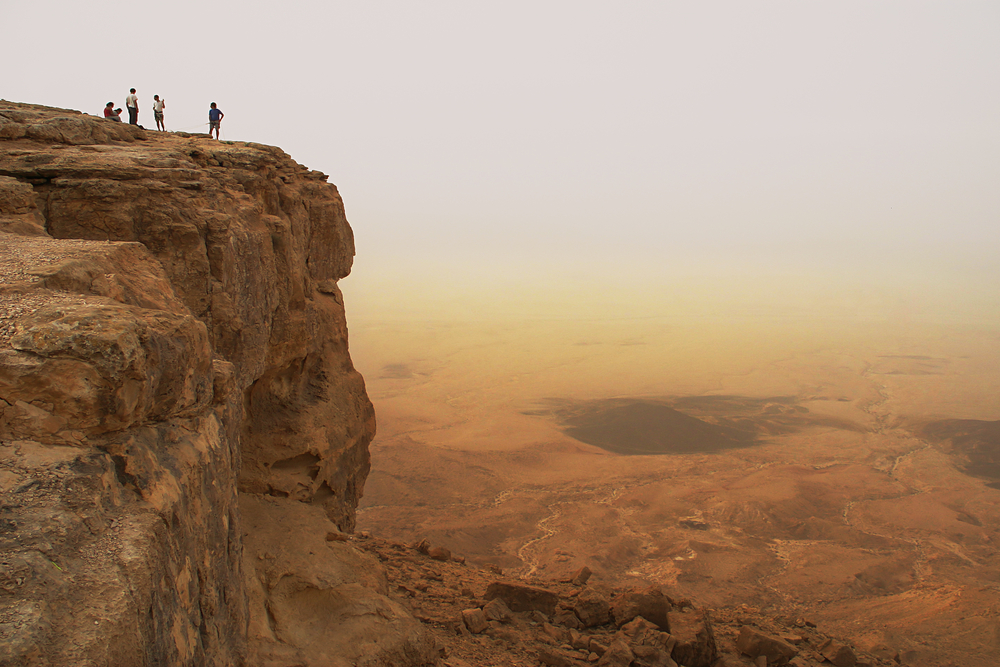 A stunning view over the Ramon crater. Photo by www.shutterstock.com

For a more challenging (seven-hour) hike in the Ramon Crater, start at the same Be’erot camping site but head toward Mount Ardon. It’s beautiful but steep, which makes its 7 miles feel that much longer. Start early in the day – at sunrise if possible. The top of Mount Ardon is at the very heart of the crater with stunning views of multicolored sand from all sides.

At 702 meters above sea level, Mount Ardon is what geologists call “relief inversion” – it was originally not a mountain but a valley. Over time, the surrounding mountains were washed away by rain and erosion, leaving just the former Ardon valley as the area’s high point. The descent from the top can be slippery, so take it slow.

Travelers may find ancient secrets in tunnel under Western Wall