If you see a young woman pushing a shopping cart full of mosaic tiles, grout and glue in Tel Aviv, it is most likely Mia Schon, an artist working to make the White City a little bit more colorful. Originally from Boston, Schon moved to Israel three years ago.

She has created several different mosaic murals. Her most recent public work, a 2.5-square-meter mural completed last summer in Tel Aviv’s Kikar Atarim, proclaims, “I love you so much.”

“I created the wall installation with the intention that it will bring happiness, color and a breath of fresh air as a contrast to a very dreary square,” Schon, 30, said.

“I’ve always been sensitive to the walls around Tel Aviv,” adds Schon, who first visited Israel when she was 14 with her Jewish day school. “Tel Aviv is a cool city but there are all these neglected walls that are falling apart and need some new life.”

Kikar Atarim is right next to Gordon Beach, with a strip club in the vicinity. “That kind of neighborhood is exactly the kind of area I like to work in. I get to create something that disrupts the scenery and gives people something new to talk about,” she says.

“When you install a public piece of art, it unites people and changes the vibe in the neighborhood. People will talk about the piece, take photos with it and sometimes help me out – it brings out a positive energy.”

Each public piece of art enables Schon to get better connected with Israelis while at the same time building a thicker skin. “Working on my public art pieces, I get to see the nice sides of people. In Kikar Atarim, I met so many new people and it was so energizing. Israelis offered me coffee and also plenty of feedback – both positive and negative, of course.

“One Israeli told me in the very beginning that the mural was ‘lo mashehu’ [nothing] and I replied ‘Patience!’” laughs Schon, who said it took about a week to complete the mosaic with the help of a friend. “When you do a mosaic, you want to finish it as quickly as possible and not let the unfinished work linger too long,” she explains. 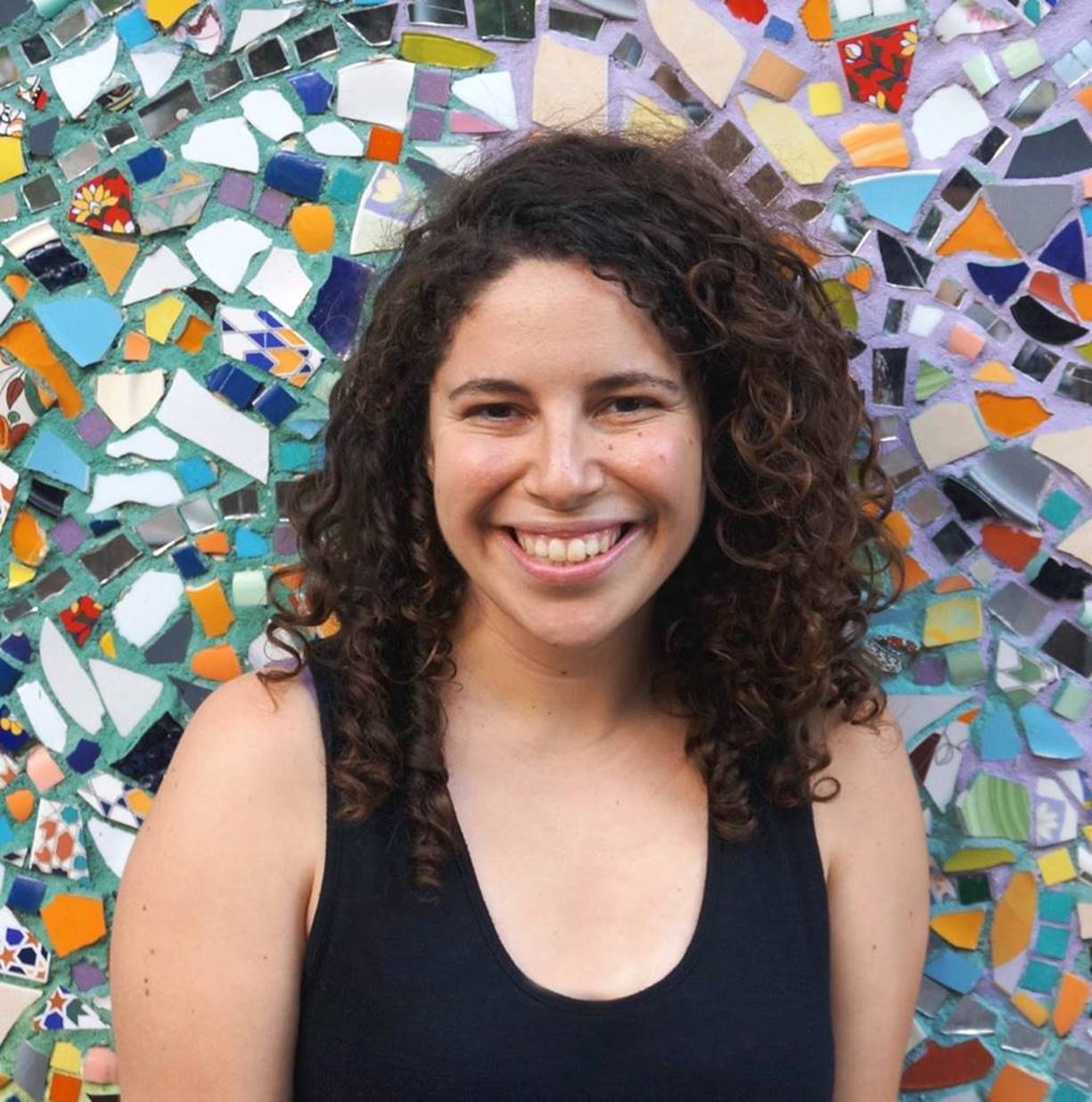 According to Schon, her work in Israel is much easier than in the US. “The walls in Israel are made from cement, and it’s a great surface to work on. You can’t mosaic wood in America, because wood expands and the mosaic pieces pop off.”

Schon grew up in Boston and earned her BA in fine art and design at the University of Michigan. She studied in Philadelphia with the noted mosaic artist Isaiah Zagar. Upon her return to Boston, she created her first piece of mosaic art from a set of plates that she inherited from her great-grandmother, who was also an artist and passed away at age 104.

Since the plates were covered in lead paint, she decided that the best way to utilize them would be to break them into pieces and create a mosaic tabletop out of them, still used by her family back in Boston.

“My grandmother was 60 when she created those statues. I watched her work really hard and approach people all the time about creating public art and now I do the same,” says Schon, who teaches mosaic workshops in her Tel Aviv studio. Her mother, Jill, and her sister, Jackie, run The Paint Bar, which offers sip-and-paint workshops in Boston. 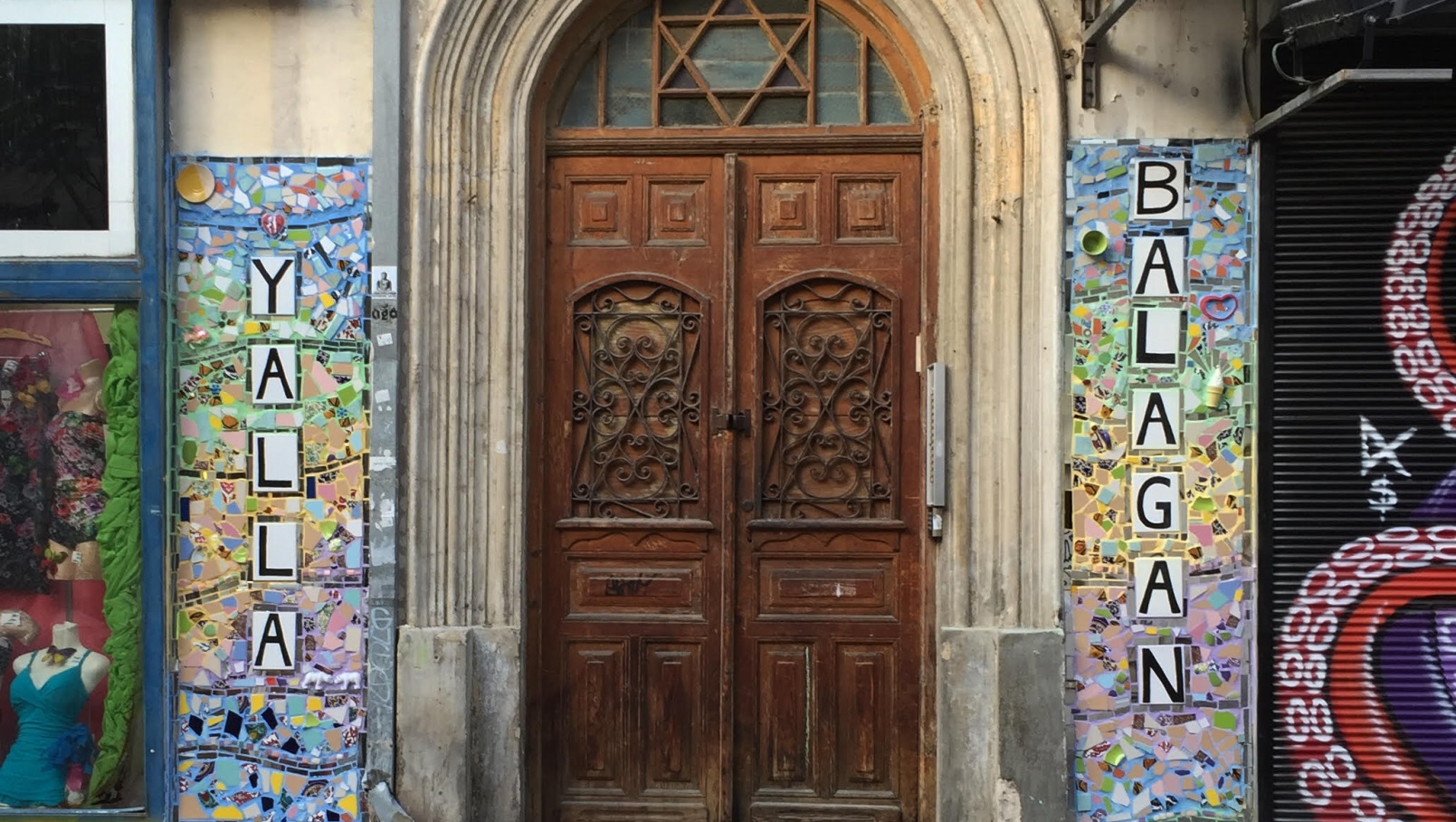 Schon’s first public artwork in Tel Aviv was just down the street from her apartment. “There was this vandalized wall full of spray paint and graffiti and I just thought to myself, what if I did something with it?”

She started working on the wall, anticipating that someone would tell her to stop but to her surprise, all she received was positive feedback.

The project helped Schon get to know her neighbors and make friends. Going to the flea market in Jaffa and bargaining for materials developed her Hebrew. “As an olah [immigrant], I had no family here and I really didn’t know that many people. The whole experience opened doors for me. People would come to watch me work and help me smash materials.”

Her neighborhood project also caught the attention of Marmelada Market, an Israeli online art market coincidentally across the street. “Marmelada is Israel’s Etsy and the employees at the office would see me working on my project. Someone from the office wrote an article about my mosaic project and sent it out to around 16,000 people. I then got my first private commission in Jerusalem to mosaic a family’s garden wall and more people wanted to join my workshops. Mosaicing became a business for me.”

Schon has completed five projects so far and is finishing up a mosaic at the back entrance of the North Central Synagogue on 126 Ben Yehuda Street in Tel Aviv.

“I’m always eyeing walls,” Schon said. “There’s nothing random to why I choose to mosaic the areas that I do. I feel that southern Tel Aviv could use some color and would like to do a community mosaic project there next.”