Taste buds must work overtime in Israel thanks to the countless and diverse mouthwatering morsels waiting to be eaten here.

“When you’re eating in Israel, all your senses are involved. You can smell it and see it being made. In Western countries, almost everything is pre-packaged so you don’t get to see or smell it. Food here really overwhelms the senses, but in a great way,” says Inbal Baum, culinary tour guide from Delicious Israel. 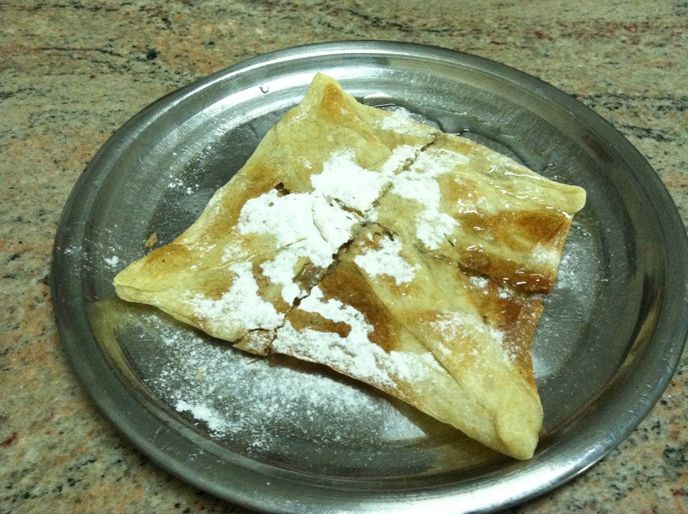 Photo of Zalatimos by Emily Livingstone-Parker/Touring with Madeleine blog.

Dozens of Israeli bakeries boast the best baklava. But Zalatimo’s Bakery in the Old City of Jerusalem, close to the Church of the Holy Sepulcher, opened in 1860 and is the oldest operating baklava bakery in the world. It is hailed by everyone from man-on-the-street to culinary greats as “the” place to bite into a warm, hand-thrown wad of filo dough soaked in sugar syrup.

Zalatimo calls its pastries “mutabak” but everyone else calls them Zalatimos. The BBC program Jerusalem On a Plate featured a segment on London-based Israeli chef Yotam Ottolenghi all but fainting from pleasure with each mouthful of the goat’s-cheese-and-clarified-butter-filled variety. 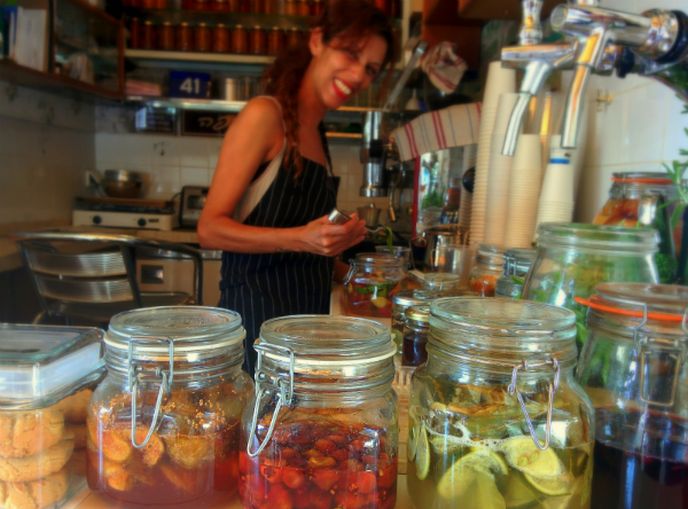 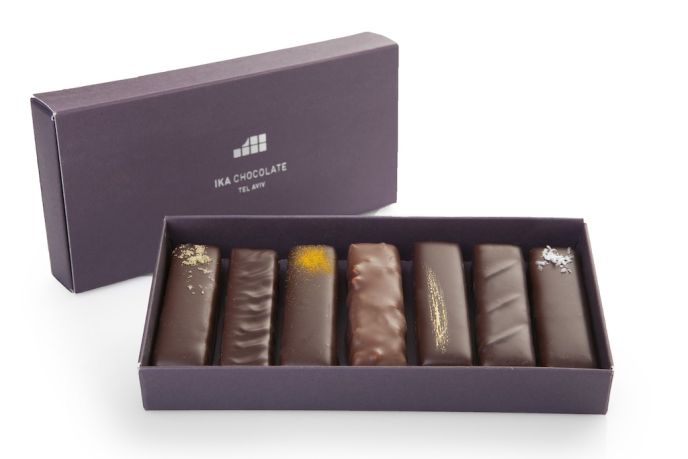 Judges at the 2012 International Chocolate Awards competition swooned over a lemon praline handcrafted by Tel Aviv chocolatier Ika Cohen. She returned to the Italian contest with a gold medal-winning Za’atar Ganachein 2014.

Ika continues to appear on international “’best chocolate shops” lists as well. A visit to her French-style chocolate boutique in Tel Aviv is a wise choice for any chocolate fan.

Chocoholics will be delighted to know that the culture of chocolate in Israel continues to flourish. Keep an eye on Yulia Freger of Bruno Chocolate – she recently won two silver awards at the International Chocolate Awards for her Mumbai Crunch and Halvah Cream pralines.

Some of the marzipan treats at Albert Confectionery in Tel Aviv. Photo by Inbal Baum/Delicious Israel.

The official Marzipan Museum may be located in Kfar Tavor in the Lower Galilee, but true aficionados of this sweet nutty treat know that Albert Confectionery in South Tel Aviv (36 Matalon) is the place to get it in Israel.

The small pastry shop doesn’t look like much, but the secret family recipes for this almond candy dough handed down through the generations by Greek immigrant Albert Yehuda is the reason people queue up here. The handmade almond cookies are equally delicious. While you’re here, walk over to the Levinsky Market for another tastebud overload. 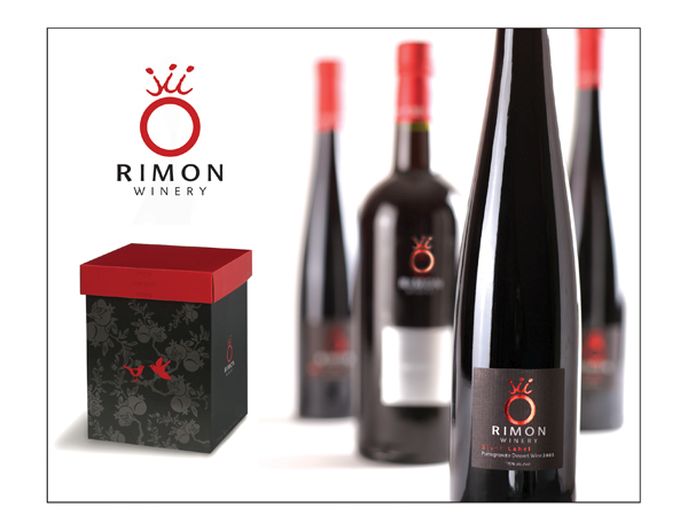 Everyone already knows that pomegranates are packed with vitamins, antioxidants and other health benefits. Israeli scientists have improved the pomegranate’s genetic makeup and Israeli entrepreneurs have innovated new ruby-red tastes such as pomegranate wines and beers. 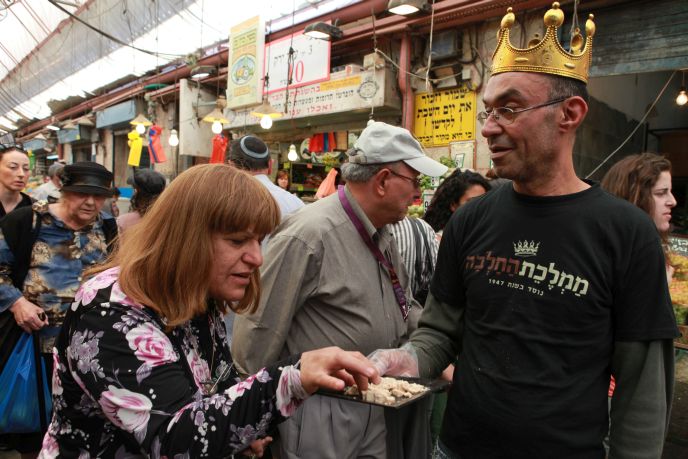 You can always get a free taste at Halva Kingdom. Photo by Nati Shohat/FLASH90

Halva can be bought at markets, stores and gourmet shops throughout Israel. But the main go-to place for this sesame-paste candy is Halva Kingdom in Jerusalem’s Machane Yehuda market. Eli Mamman stirs Moroccan family secrets into his recipes to produce more than 100 flavors of this sweet confection. The first Halva Kingdom store opened in 1947 in the Old City of Jerusalem; the current location, at 12 Etz HaChaim Street in the market, opened in 1986. 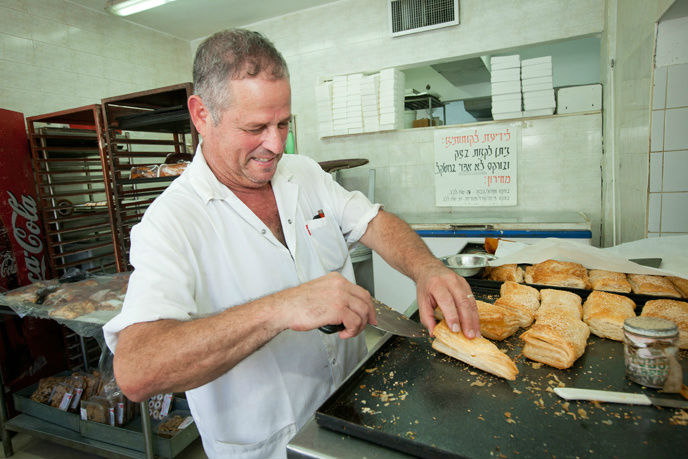 An Israeli chef prepares bourekas at a restaurant in Beersheva. (Photo by Moshe Shai/FLASH90)

Bourekas are also ubiquitous in Israel, and everyone has a favorite Turkish/Bulgarian bourekas place. Leon and Sons bakery in Jaffa is a three-generation family business known far and wide for its delicious flaky filo offerings made without margarine.

Falafel and shawarma joints abound, but extraordinary bites can best be found in the multicultural specialty sandwich shops in every town and city across the land.

In Ramle, take your growling tummy over to HaTunisay Shel Eli for a Tunisian Fricassee; in Givatayim, head over to HaSabich Shel Ovad for the most famous Jewish Iraqi breakfast sandwich in Israel; and in Jerusalem, Chochi’s Sandwich reportedly serves up the best schnitzel sandwich in Israel. 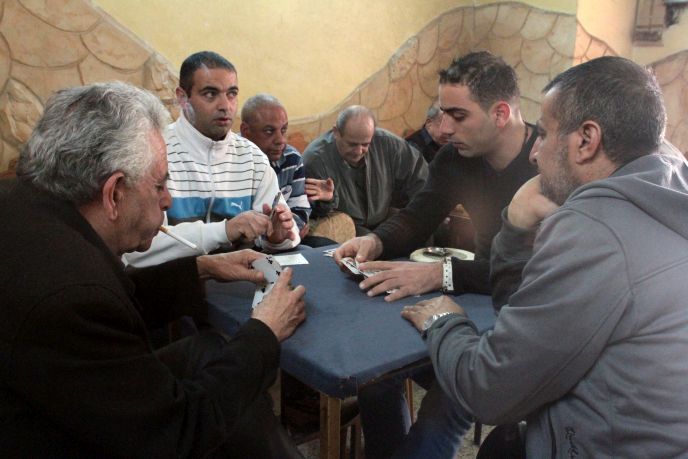 When strolling through the shuk (market) in the Old City of Nazareth, follow your nose to Abu Salem’s Coffee House just off the main street, down an alleyway. While the home brew is good, the real reason to stop here is for the nut-infused cinnamon tea.

The café is a second home for many of the city’s elders, who come to play backgammon all day long and drink the otherworldly hot beverages on the menu. Proprietor Wessam gave up a career in graphic arts to carry on the tradition of his father and grandfather in running the café. 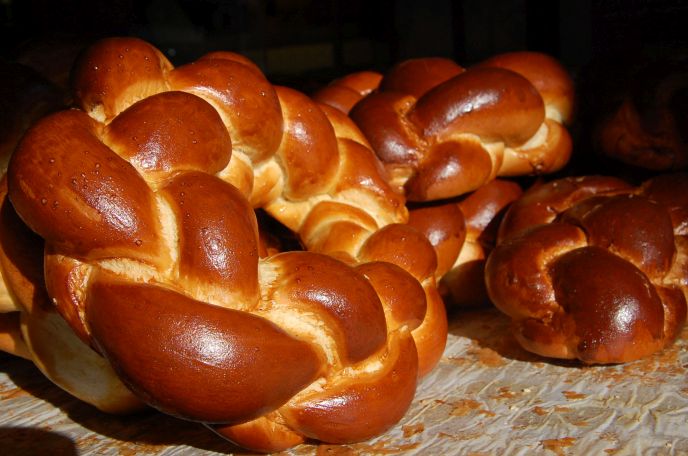 The ultimate place to buy fresh challah is a matter of opinion. But there’s no denying the extraordinary experience of a visit to Viznich Bakery in Bnei Brak on a Thursday night or Friday morning as these white braided loaves of soft goodness are snatched up as they come out of the ovens.

The bakery, which has been around for more than 60 years, is in a neglected alleyway. You’ll know you’ve arrived at the correct location by the dizzying smell of freshly baked challahs and the ever-growing lines of people, both secular and religious, waiting to buy them.