Kiosk Est. 1920 photo via Facebook
Claiming to be the first kiosk in Tel Aviv, the aptly named Kiosk Est. 1920 was established that year to serve the movie-going public at Eden Cinema, the city’s first (and long since closed) theater – then situated across the road.

Made of deep, periwinkle concrete, it’s one of Tel Aviv’s prettiest kiosks and is right at home on the fringes of the charming Neve Tzedek neighborhood. There are plenty of shaded tables on which to eat your sandwich, fresh fruit and cheese platters and sip your coffee. 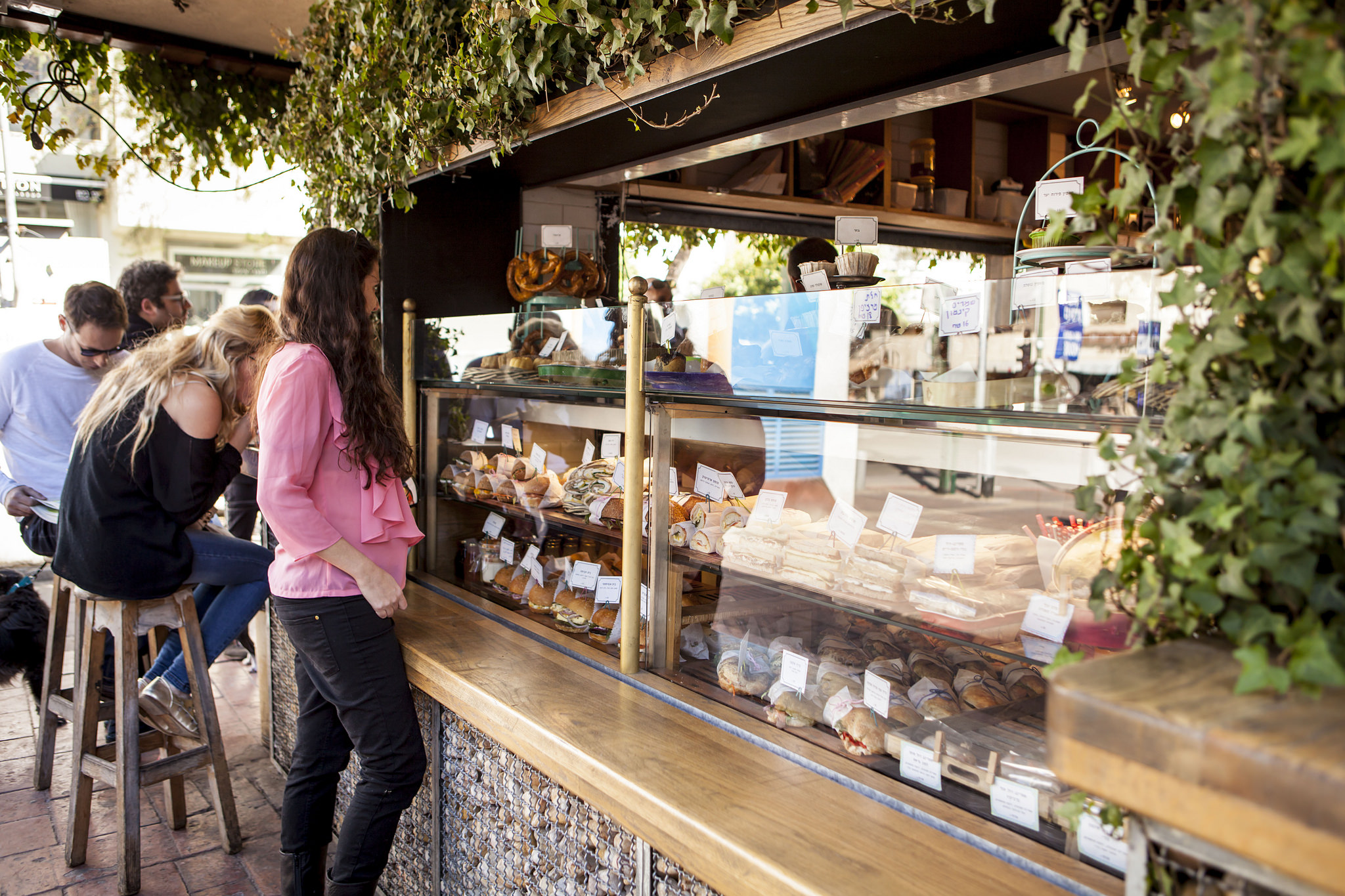 We Like You Too. Photo by Kfir Bolotin, courtesy Tel Aviv Municipality
Habima Square’s benevolently named We Like You Too  seems to have a permanent queue waiting to be served its outrageous, artisanal sandwiches. Head over after watching a show at the adjacent Habima Theater.

The ultimate go-to joint for late-night drunchies, Kiosk & Co hits the spot with succulent hamburgers, chunky sandwiches heaving with gourmet corned beef and fermented sauerkraut. During the day, mollify the worst of hangovers with a smoothie-cum-lassi comprising yogurt, lemon, celery and an assortment of secret ingredients. 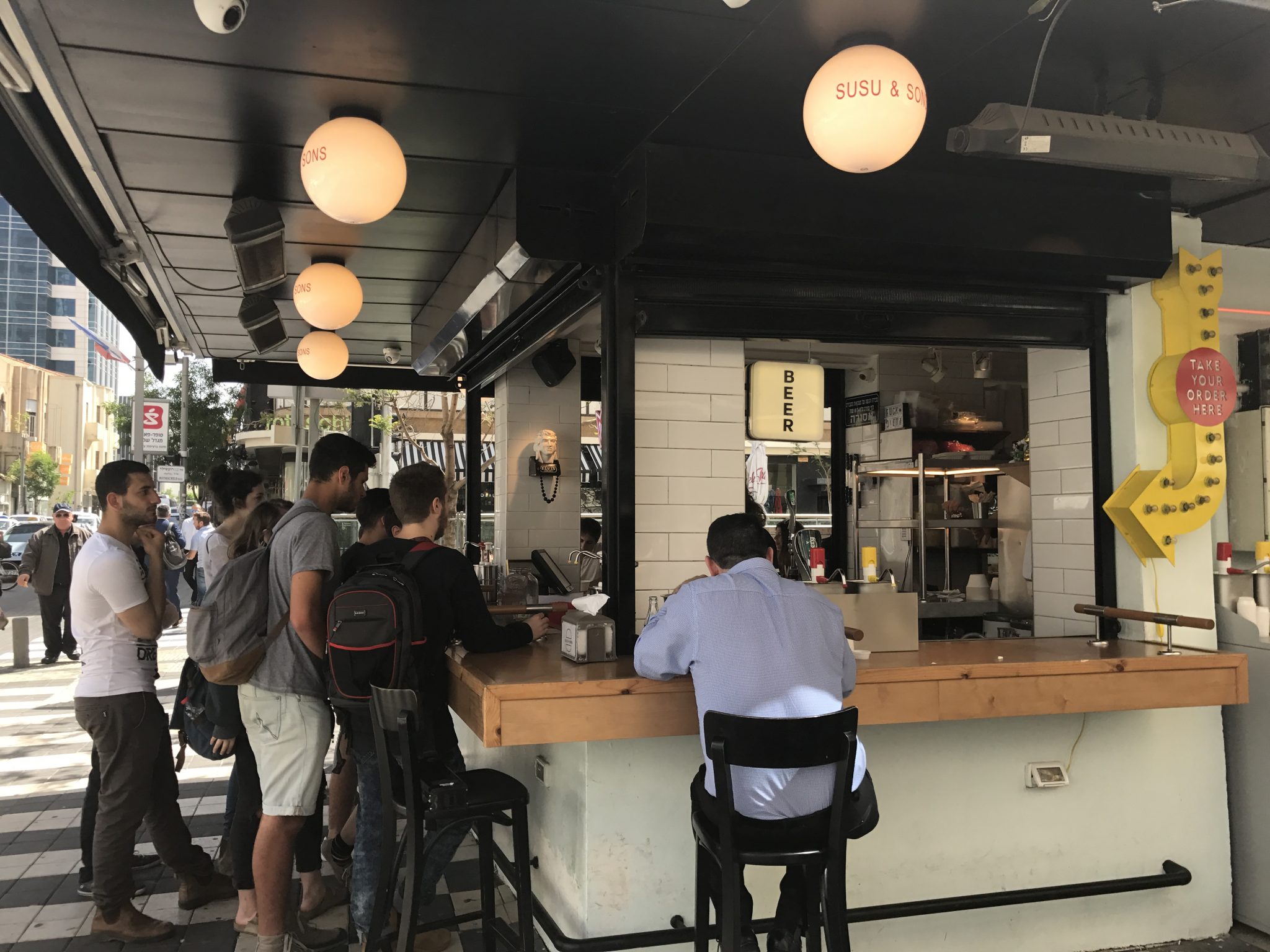 Susu & Sons. Photo by Nicky Blackburn
If anyone has the chutzpah to try fusing egg salad with a hamburger, it’s celebrity chef Omer Miller of Susu & Sons. Miller’s one-trick-pony kiosk on the corner of Rothschild and Herzl features hamburgers couched in custom-made buns courtesy of boutique bakery Lechem Cham.

Along with the standard lettuce and tomatoes, these famous and popular burgers are embellished with anything from guacamole to Roquefort or lobster, and seasoned with Susu sauce, whose ingredients, of course, remain hush-hush. The only downside to this fast food joint? It ain’t so fast. Even at 1am there’s a line of people. 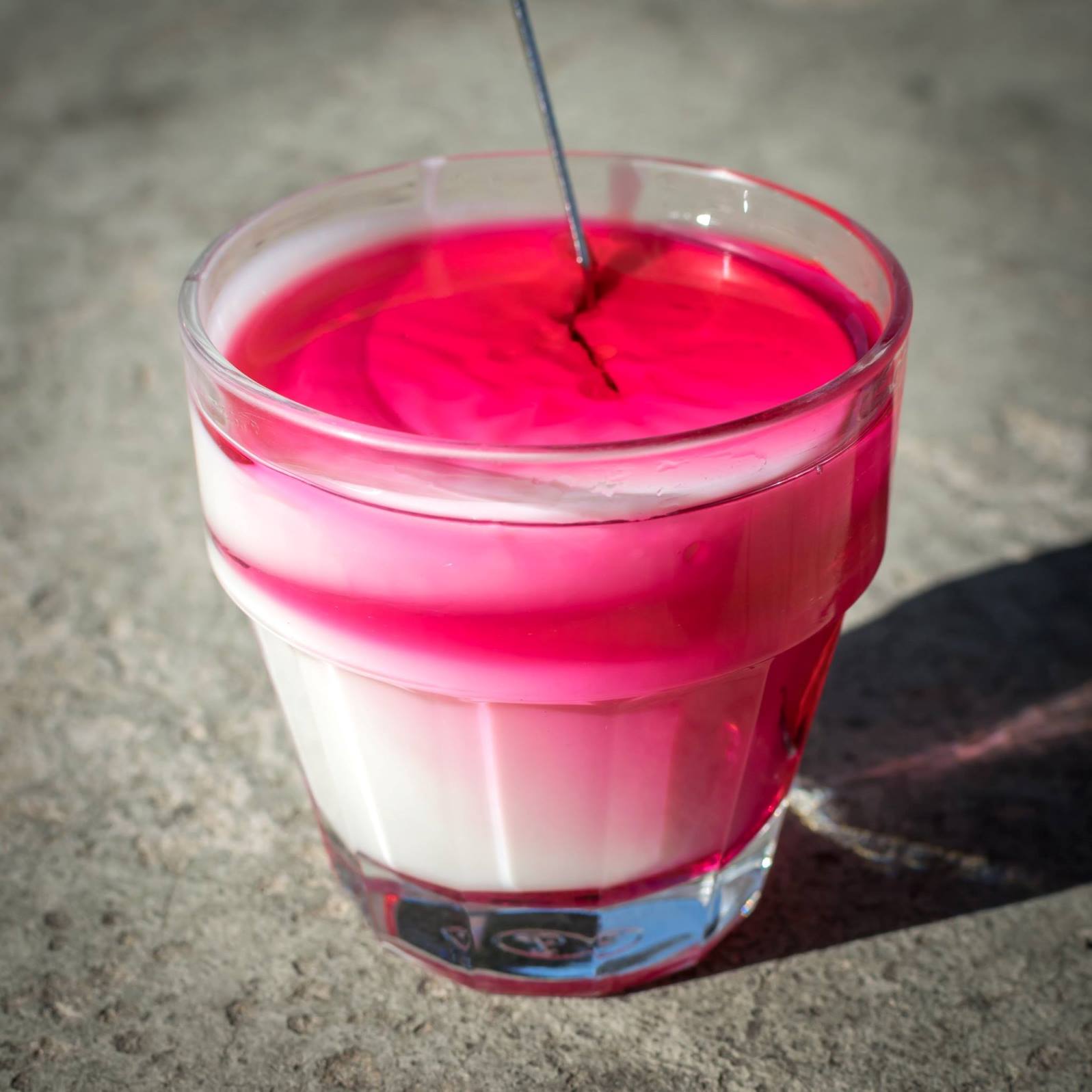 Malabi is legendary dessert available at Malabi Dajani in Tel Aviv. Photo via Facebook
For 70 years, the famous Malabi Dajani has offered just three items on its menu: malabi, sachlab and gazoz.

While the latter two are beverages of sorts – a porridgy type drink topped with pistachio and coconut shavings and a flavored seltzer, respectively – malabi is a dessert, and a divine one at that. The rose-syrup topped, white custard confection is so delicious you’ll forget how strange it is to be eating it standing in the middle of the sidewalk – because this kiosk has no chairs.

Fear not though; in preparation of the forthcoming light rail, which will no doubt wreak havoc on local businesses on Sderot Yerushalayim, this Jaffa staple recently decided to part with tradition and open an additional branch around the corner on Shlavim with actual places to sit. 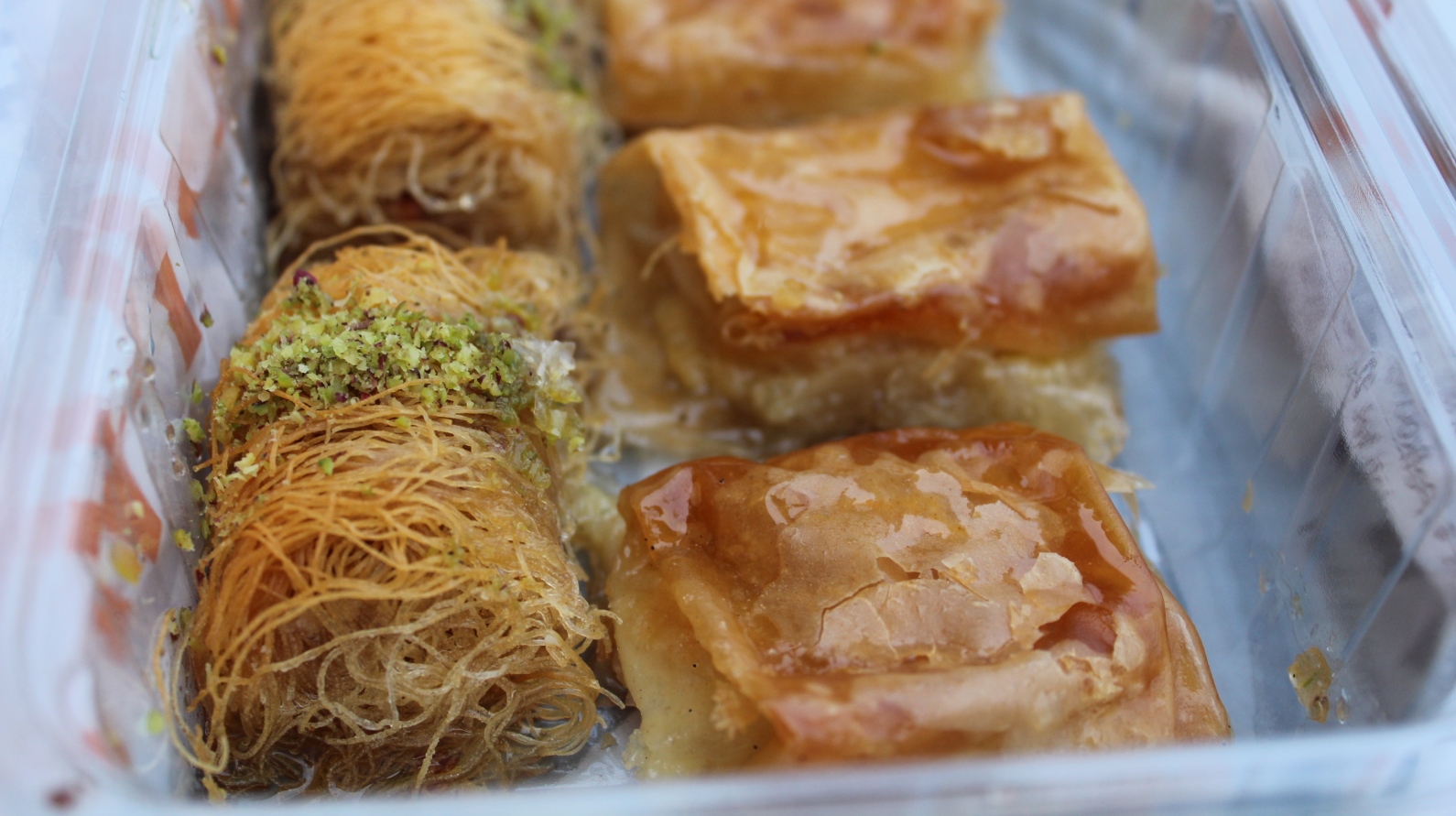 Baklava and kanafeh photo via Shutterstock.com
More a stand than a kiosk per se, this is another one for dessert lovers in the heart of the Carmel Market. The surly man selling the honey-based kanafeh and baklava has been there forever, and his flair for the Arabic confection more than makes up for what he lacks in manners.

The baristas here might be pros at brewing the perfect cup of coffee but ask them their place of employment and they’re stumped. No matter though, because this nameless gem on the corner of one of the busiest intersections in Tel Aviv is always packed regardless.

Apart from the usual coffee shop fare, the kiosk offers an interesting menu including miniature egg salad, spinach and truffle sandwiches and Vietnamese snacks. Munch on a giant pretzel with melted cheese and watch the world whizz by. 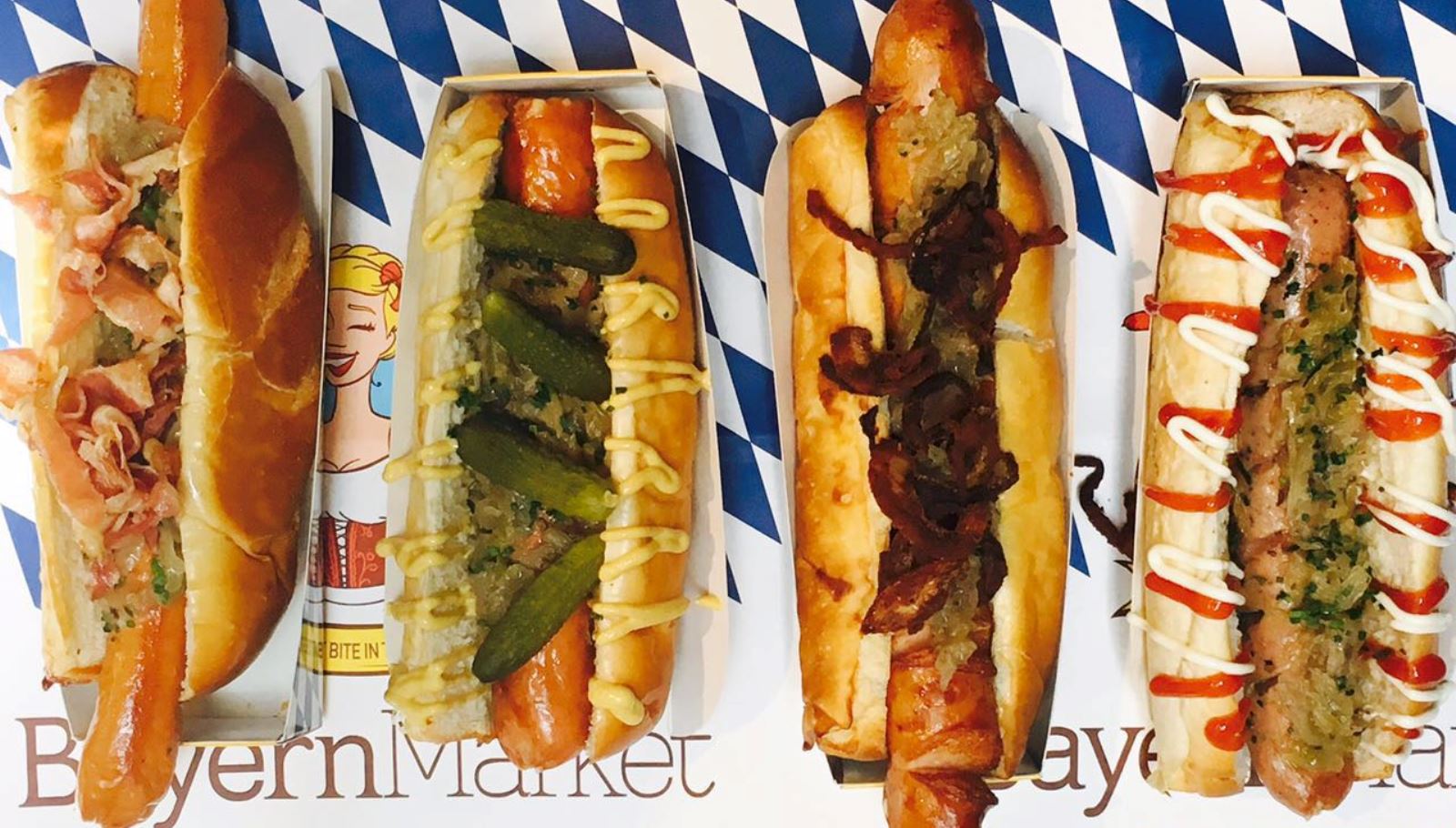 Bayern Market photo via Facebook
Just about the only food that can contend with Bavarian beer is Bavarian food. Head down to Bayern Market, Sarona’s Bavarian street-food kiosk, and stuff yourself silly with sausages – from weisswurst to Franconia.

As well as being wiener heaven, Bavaria is also the birthplace of those jumbo pretzels that have become so ubiquitous in Tel Aviv. Grab yourself one of these doughy delights and wash it down with some beer (there are about 4,000 Bavarian brands to choose from).

With the sea breeze rippling into your latte and rays of sun toasting your petit pain-au-chocolat, this is the perfect rest stop after a morning swim. The recently renovated wood-and-brick shack is peopled with cheery baristas and pajama-sporting locals, a solid combination for a lazy Saturday. 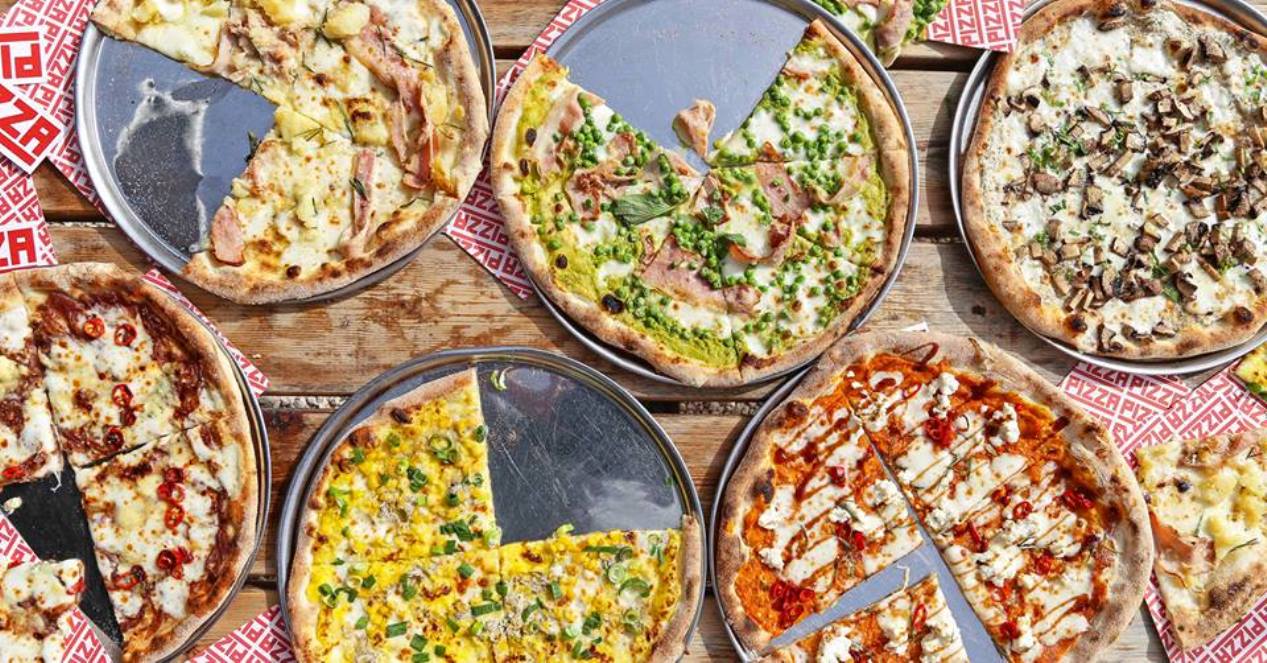 Some of the 16 varieties of pies at Pizza Grinberg. Photo via Facebook
More of a tiny parlor than a booth, Pizza Grinberg’s appeal is the parking surrounding this place, turning it into an Italian drive-thru.

Boasting 16 types of thin-crust pizza with dozens more toppings and add-ons, it’s no wonder that despite its suburban location this place is always full. Don’t resist a Valentina with Portobello mushrooms, mascarpone, ricotta, and parmesan nestled on a layer of black truffle puree. Oh, and the best part? In August, Pizza Grinberg launched its breakfast menu for the weekends because, well, what better way to start the day than with a pizza? Breakfast of champions. 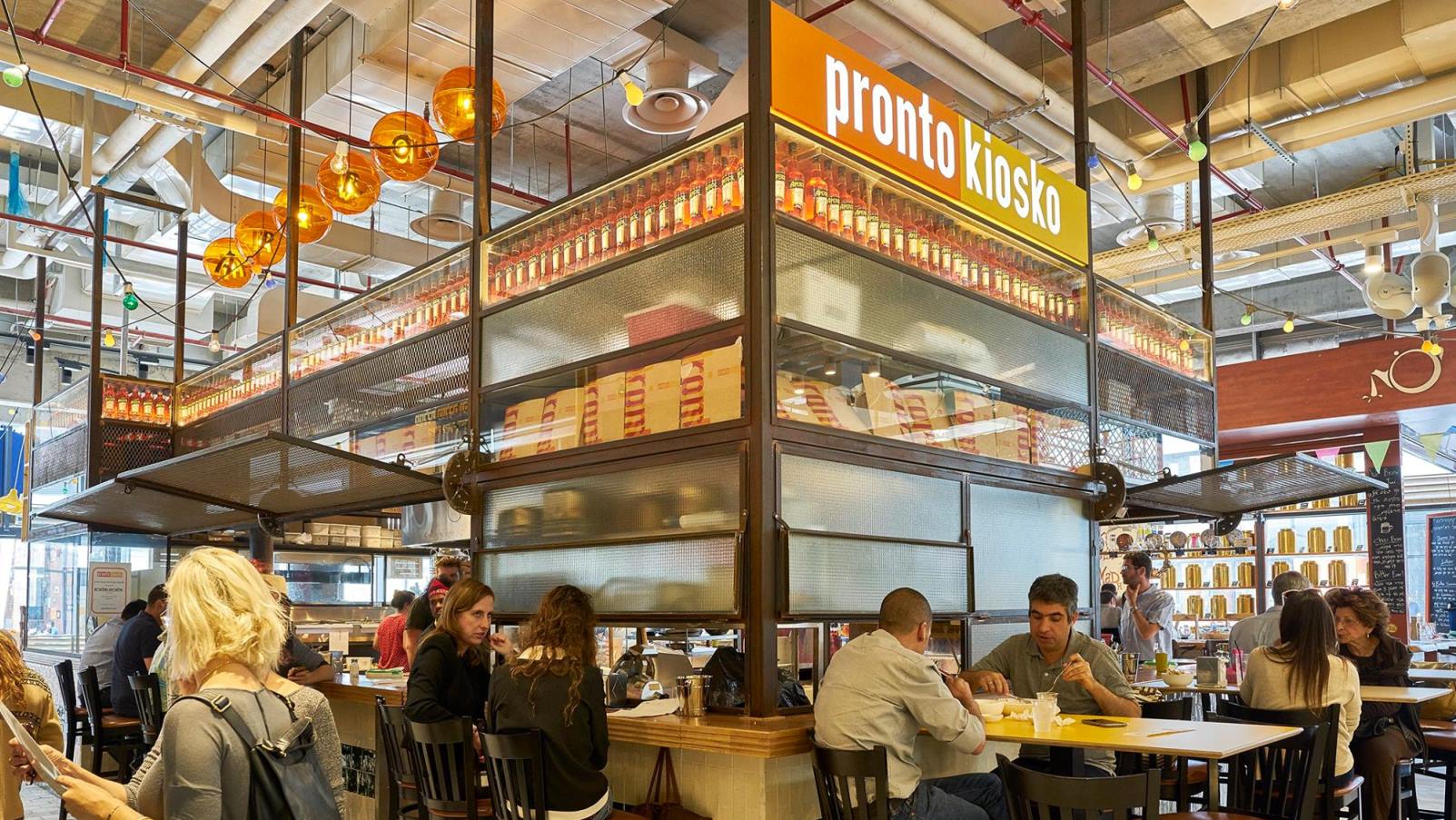 Pronto Kiosko photo via Facebook
Located in the charming Shuk Tzafon, Pronto Kiosko offers the best in handmade, al dente pastas cooked in a myriad of sauces from slow-cooked veal ragout to taboon-grilled chicken in spicy Napolitana. Curb the carbs (or at least allow yourself to think that) by ordering the green pizza topped with fresh broccoli, eggplant, garlic confit, basil and nuts. Got a sweet tooth? Don’t leave without grabbing a chocolate calzone. 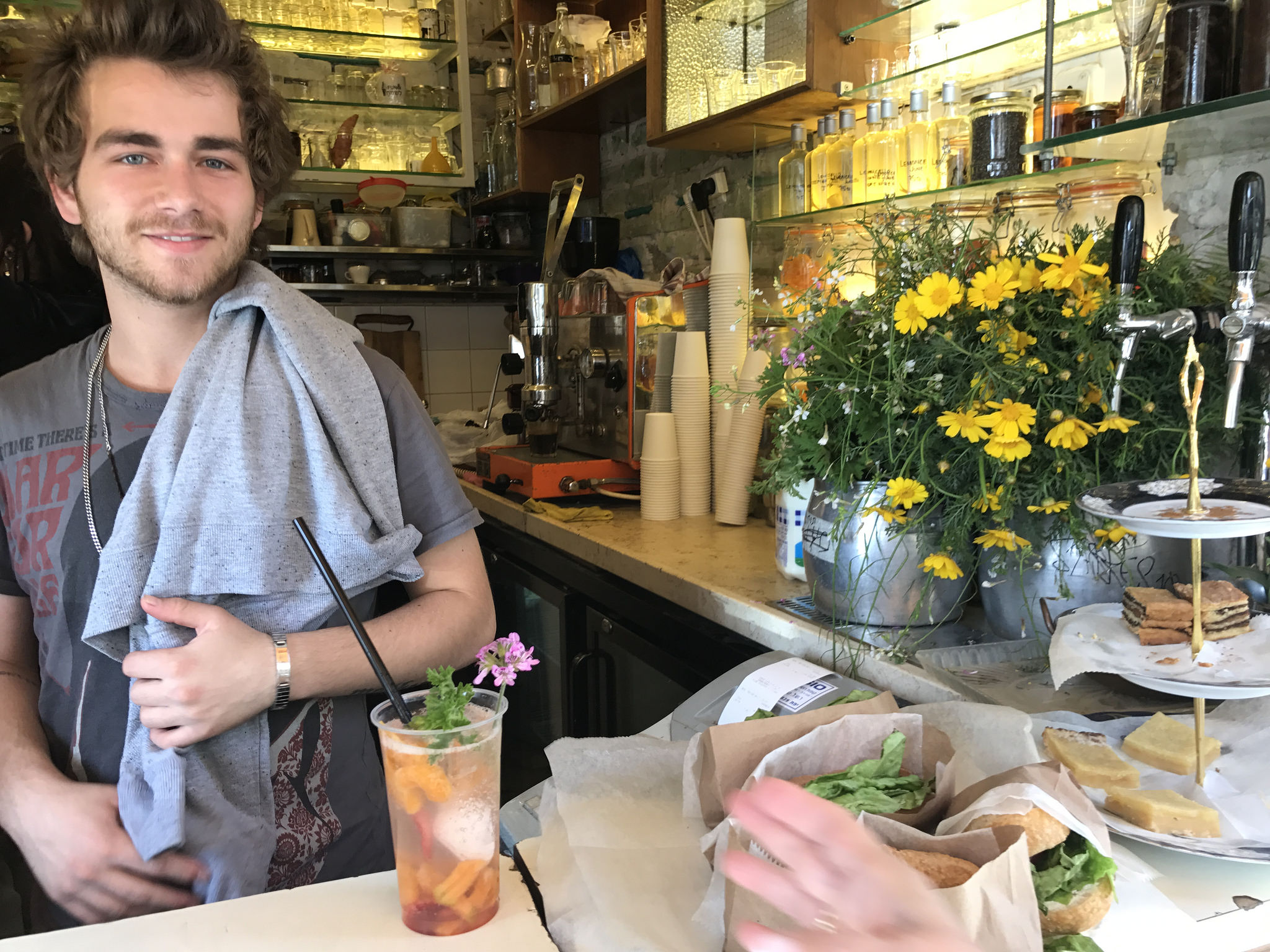 A boho-chic staple. Café Levinsky –Soda Gazoz. Photo by Nicky Blackburn
Resembling more of a tiny apothecary than a kiosk, Café Levinsky – Soda Gazoz  (aka Benny Soda) is a boho-chic staple in the heart of the Levinsky Market. Watch mixologist-turned-soda-connoisseur Benny Briga whip up the most mythical, fizzy concoction you’ll ever encounter, with fresh preserves, whole apricots, sprigs of lemongrass, a sprinkling of chia and of course carbonated water. Just don’t bother with particular requests; the customer is definitely not always right when it comes to Briga’s creations. 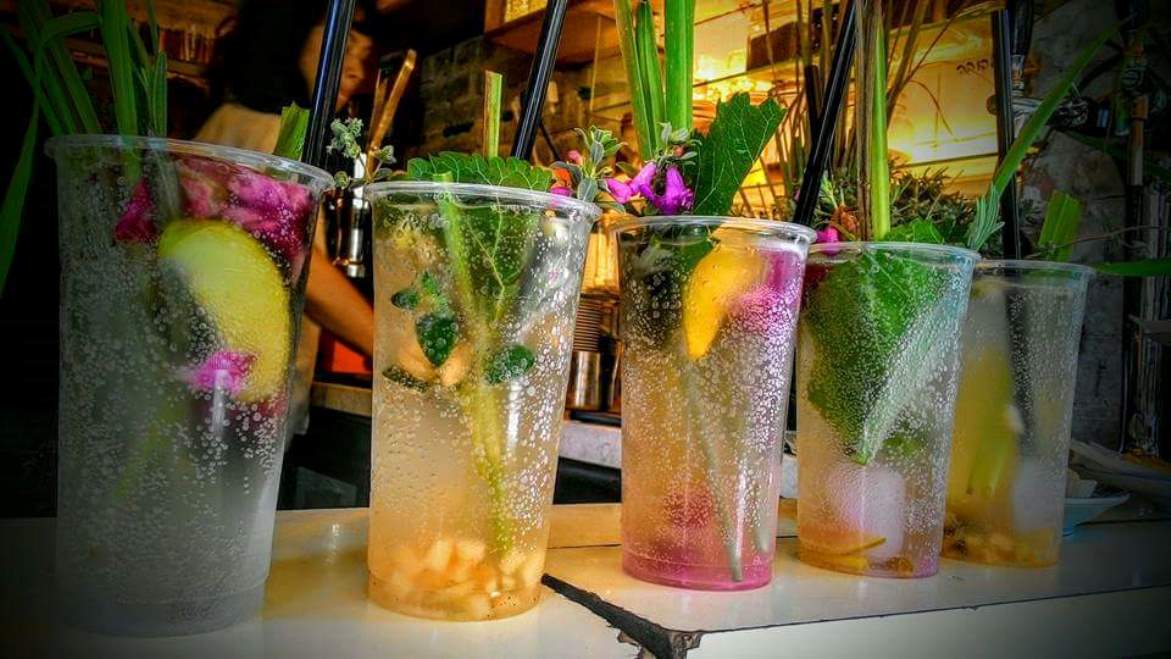