9 Reasons Why Israel Is The Destination For Food Lovers

With its rich history of immigration spanning Europe, Northern Africa, and the Levant, Israel’s culinary heritage has created a “must-taste” destination for food fanatics across the globe. Here are some particular highlights that you would regret not trying should you find yourself hungry on the shores of the eastern Mediterranean! Put down the cardboard-like substitute you’re shoveling into that disguised wallpaper paste in front of you right now! The real bread is soft, fluffy, and is always served to the table fresh from the oven. The dip itself is impossibly smooth and comes with an endless variety of toppings depending on the house specialty. Some of the favorite dressings include olive oil, pine nuts, paprika, Za’atar (dried hyssop and sesame), and tahini. Top destinations for your chickpea fix include Jaffa’s Abu Hassan, Ktse HaNacha just outside of Tiberias, and the ever-popular “Hummus Said” deep in the heart of Akko’s souk. Make sure you try the warm, deconstructed variety, msabbaha, for a satisfying, chunkier finish. 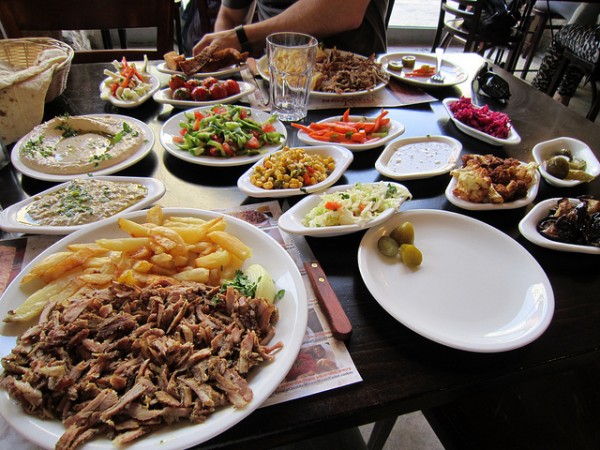 Fancy a kebab? Strictly speaking, shawarma refers to something similar to what’s commonly called a “Doner” in the UK. Shawarma in Israel is almost universally good and it’s pretty much guaranteed to be fresh and thoroughly satisfying. Try any variety of fillings and toppings offered (tahini, hummus, pickled turnips, and amba to name a few), but make room for at least one laffa on your visit – the largest and mightiest bread wrapping! With a climate and culture of wine making dating back to the Old Testament, modern Israeli wines have been turning heads from old world producers in Western Europe. The notoriously hot and dry conditions to the south tend to produce full-bodied examples of Merlot, Syrah, and Cabernet. Israeli ingenuity has measured this against higher climbs in the north’s mountainous Golan Heights and Jerusalem’s Judaean Hills, ensuring a balanced finish. Fine examples of the country’s wineries include Flam, Clos de Gat, and Galil Mountain. Shakshouka’s many varieties include the addition of chorizo , yellow pepper, and cumin (Gerald Herbert/AP)

As versatile and almost as argued-over as the nation’s hummus, the competition for Israel’s favorite breakfast is fierce! Where hummus was popularized somewhere between Egypt and Lebanon, this spicy tomato and chili dish with poached eggs originated across the North African peninsula. Shakshouka is generally credited as being of Tunisian or Moroccan invention. Tel Aviv’s “Cafe Montefiore” and Jaffa’s infamous “Dr. Shakshouka” produce excellent examples and serve the dish throughout the day. For some truly inspired home cooking, gather some friends and get yourself invited to dinner where you’ll hear someone mention the word “schnitzel” in public. There’s no comparison to any shop-bought variety, and Israel’s method of serving the hearty breadcrumb-fried meat (usually veal or chicken) alongside heaps of creamy mashed potatoes makes it incredibly delicious. A tremendous restaurant version is found at “Cafe Noir”, just off Tel Aviv’s Rothschild Boulevard. Like its meaty, street-feast cousin shawarma, falafel is so abundant and competitive in Israel’s bustling food scene that it’s hard to find a bad example among its many producers. Falafel’s origins are, once again, highly contested, but the snack has provided delight to a burgeoning vegan population for its complete lack of animal-based ingredients. Generally formed as a mix of chickpeas, fava beans, coriander, and cumin, these crunchy little treats are a world away from the flabby, bhaji-style balls found in European supermarkets. Eat with pita and plenty of tahini, or forgo all sides and enjoy as a satisfying treat as you walk home from a hard day at the beach. The wheat, minced onion, and ground beef parcel that is Kubbeh is no exception when it comes to variety . Whether it’s the fried rugby-ball-shaped Kibbeh Raas from Nablus, or the raw Kibbeh nayyeh from Lebanon, this beautifully spiced and comforting mezze is dotted around Israel’s varied landscapes and has many partners across the Arabic world and South America. Israelis and their neighbors share the delight of a fiery meal now and again, but instead of using South Asian influence as its primary source of chili goodness, the Middle East has its own chili accompaniments for any “heat lovers” on the prowl! A must for any hummus/shawarma/falafel lunch will be to try the ever-present shipkas (pickled chili peppers) that adorn the side plates of nearly every restaurant. Be sure, too, to try every hummus joint’s zhoug – a Yemenite green chili and lemon dip – and the Maghreb Harissa paste that forms a key ingredient in that Shakshouka breakfast you’re yearning to try. For the dessert connoisseurs among us, you may just have heard of this incredible innovation, rarely heard of outside the Eastern Mediterranean. Essentially soft white cheese meets pastry and syrup (what’s not to like?), Kanafeh is a delicious treat and more delicate than it may sound. If cooked well, the pastry is browned in thin slivers against the subtly sweet cheese, with rose or orange blossom water dribbled on top in the final stages of cooking. Look for the cafes where everybody is eating the same thing and order alongside Arabic coffee (simply referred to as black coffee in Israel) for an authentic after-dinner finale.

A Most Stunning Video of Israel