Top 18 things to do in Jerusalem for free

The best things in life are free, right? Well, that certainly holds true when it comes to Jerusalem. One of the holiest and most magnificent cities in the world, it is also packed with amazing sights and experiences that can be had without spending one little bit.

Scroll down below for our complete list, and enjoy your visit. 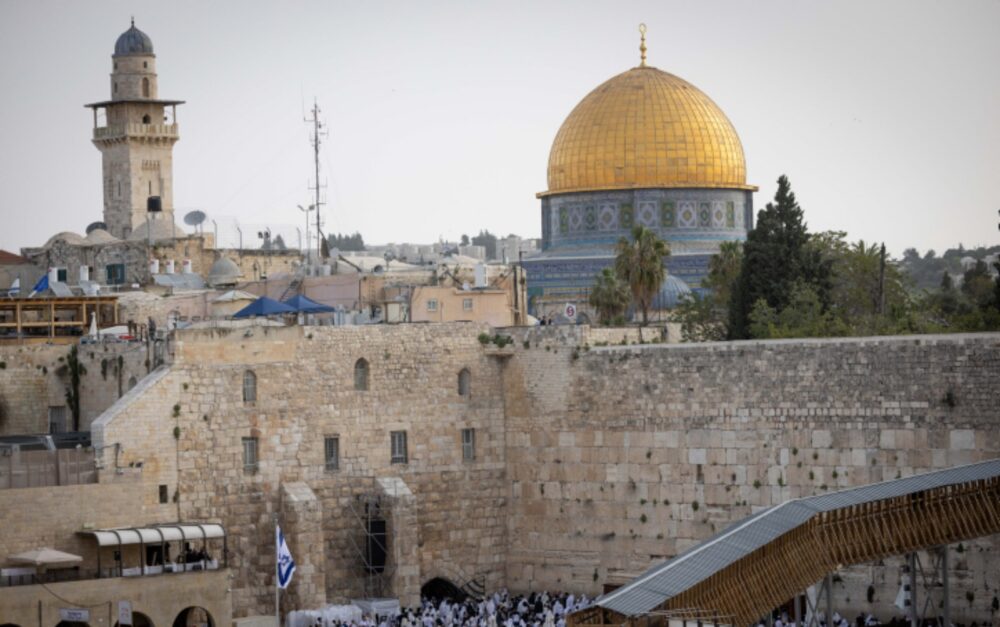 Jerusalem’s Old City is home to world-famous and monumental sites such as the Western Wall, the Temple Mount and the Church of the Holy Sepulchre. Photo by Yonatan Sindel/Flash90

The Old City of Jerusalem surely garners an article or 10 of its own, but for our immediate needs we’d just like to point out that all of its highlights can be enjoyed and revered completely for free. We’re thinking world-famous and ancient sites such as the Western Wall, the Temple Mount, the Church of the Holy Sepulchre, as well as buzzing markets, craft workshops and street food. You could easily spend a whole day here, popping in and out of the historical sites and marvelling at it all. 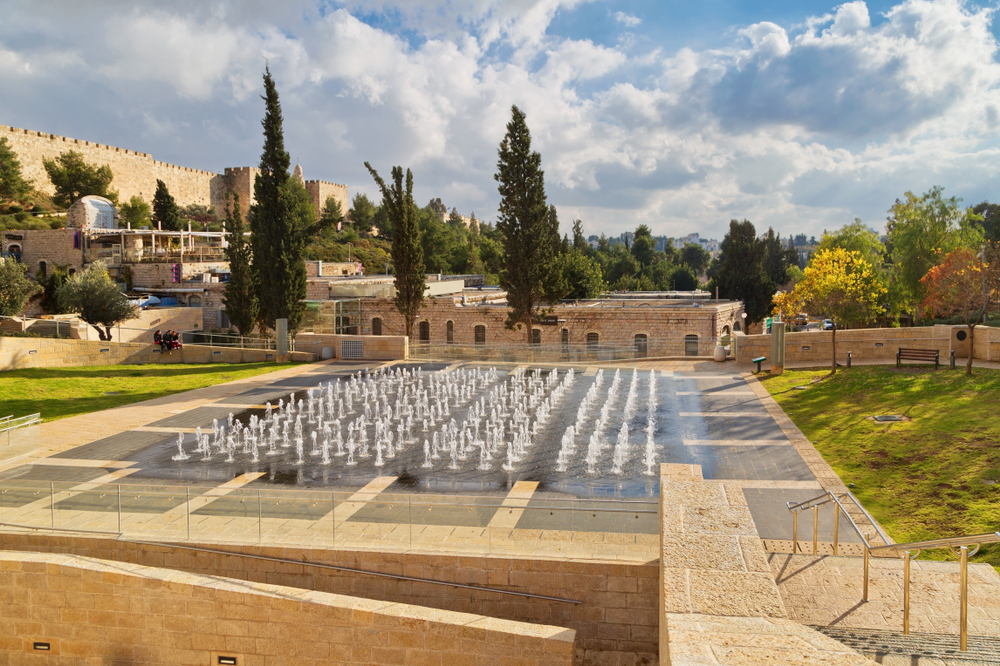 Teddy Park is one of the rare meeting places for all parts of Jerusalem society, particularly kids. Photo by DeltaOFF / Shutterstock.com

Teddy Park is located just outside the Old City walls, and quite literally offers a refreshing and light-hearted experience after the intensity of all the above’s grand sites. At the heart of the park is a fabulous water fountain that every couple of hours spews tall jets of water from the ground, in the evening accompanied by a light-and-sound show. It’s a rare meeting place for all segments of Jerusalem society, particularly for the kids running around soaking and screaming. 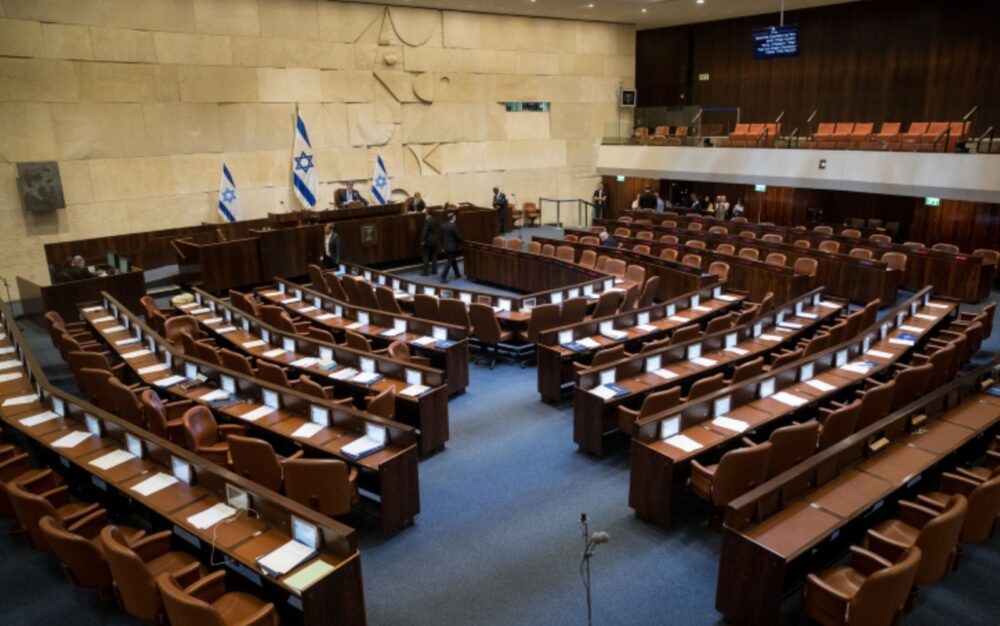 As well as rowdy politics, Israel’s parliament is home to fascinating artwork and architecture. Photo by Yonatan Sindel/Flash90

Israel’s parliament, or Knesset, is one of Jerusalem’s landmark buildings. It’s also one that you can enter, for free, and enjoy a guided tour in a wide range of languages. Don’t expect the same pomp and grandeur of, say, the British Houses of Parliament, as this is a much more chilled-out architectural affair, although complete with gorgeous artwork, mosaics and tapestries. Interestingly enough, you do have to dress appropriately, and guests over the age of 14 are required to forgo items such as crop tops and sweatpants. 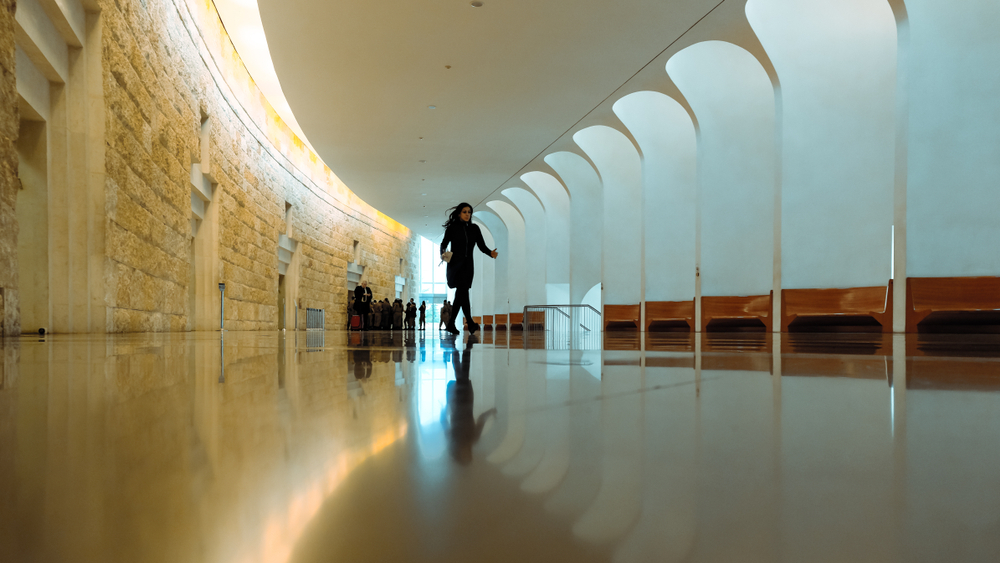 Israel’s Supreme Court is an architectural beauty that can be enjoyed via an excellent free tour. Photo by Shalom Rufeisen / Shutterstock

Not far from the Knesset is the Supreme Court of Israel, which like the legislative branch of government offers fantastic free tours. Visitors get to hear all about the thoughtful and inspiring architecture of the building, take a sneak peek at court cases going on and feel terribly important throughout. Individuals need not pre-book their English-language tour, but groups of 10 or more are required to coordinate their visit. 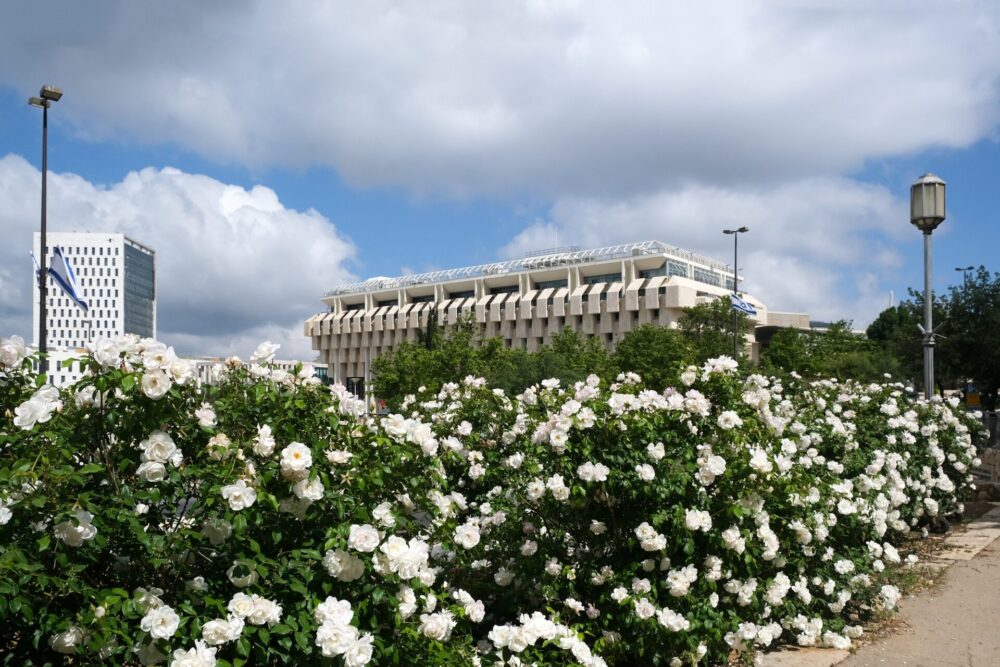 The Wohl Rose Garden is an elegantly quiet park full of beautiful roses that sometimes turns into a protest site opposite the Knesset. Photo by Irina Opachevsky / Shutterstock

Located between the Knesset and the Supreme Court, the Wohl Rose Garden is an elegant park filled to the brim with hundreds of varieties of roses. Originally used only for state ceremonies, the garden has for decades been a favorite among locals for a variety of occasions, ranging from birthday parties and picnics to demonstrations in front of the legislature. It makes for a very pleasant and quiet walk, and is the nicest way to get from the Knesset to the Supreme Court or vice versa. 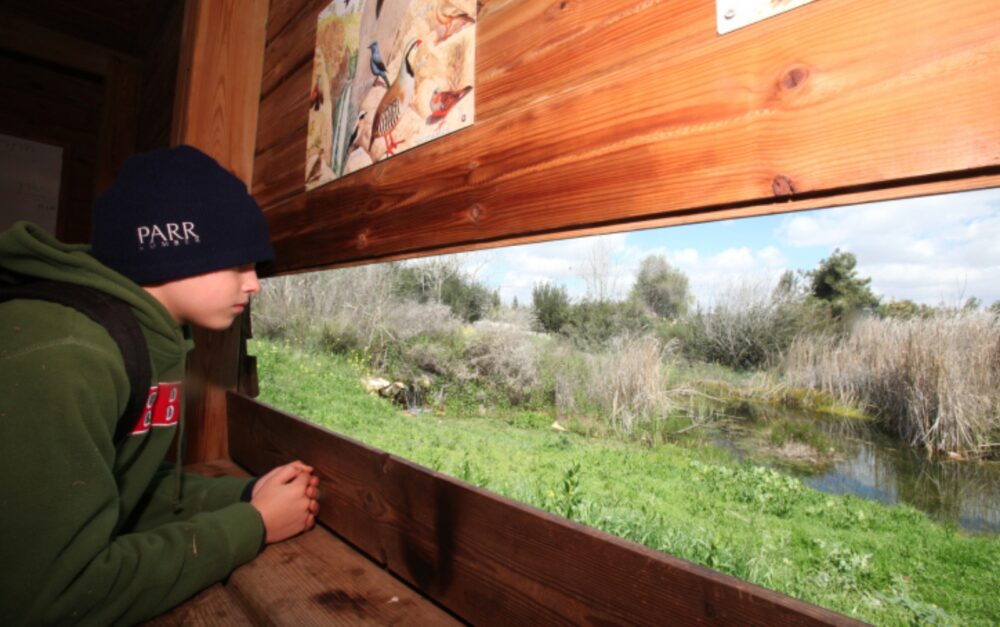 The Jerusalem Bird Observatory is a small and unique urban wildlife spot. Photo by Yossi Zamir/Flash90

Still in the vicinity of the above sites, the Jerusalem Bird Observatory is a wonderful urban wildlife spot where you can catch sight of local birds and, in season, migrating ones, and marvel at their beauty and diversity. The pros recommend getting there in the early morning for the best birdwatching, and we recommend bringing a sweater with you – early morning in Jerusalem is a chilly affair, even in summer! 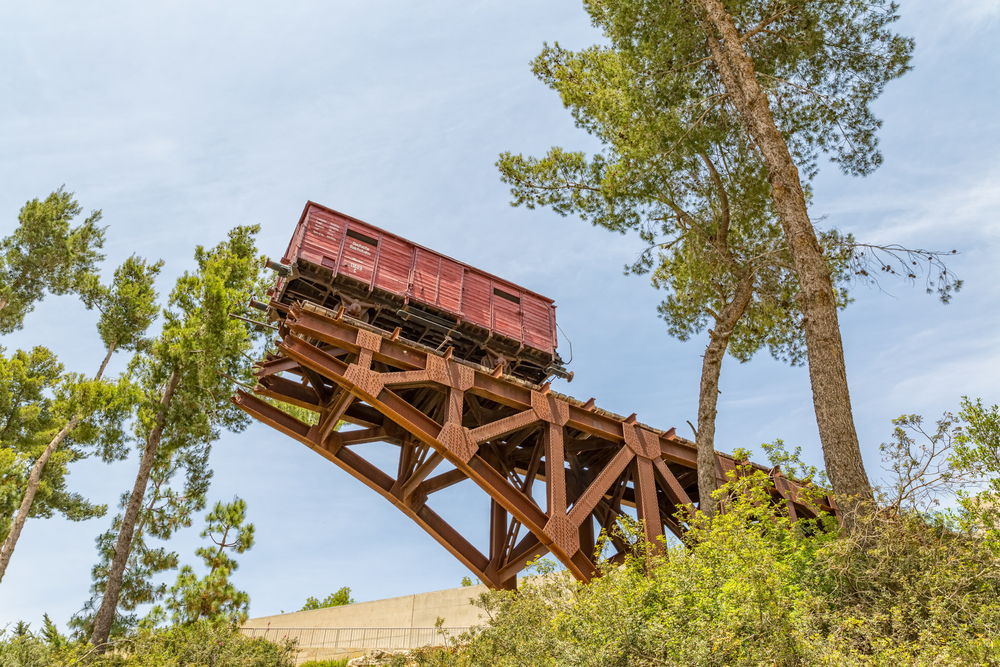 The Yad Vashem Holocaust Remembrance Center is full of remarkable exhibitions and includes this train used to transport Jews during the Holocaust. Photo by Opis Zagreb / Shutterstock

The Yad Vashem Holocaust Remembrance Center is a must-stop site on any visit to Jerusalem. Its Holocaust History Museum and grounds offers a remarkable way to learn about the Shoah and its victims through various exhibitions, artifacts, video art, film and its famous Hall of Remembrance. Note that entrance to the museum must be reserved in advance and is permitted from the age of 10 and above (bar babies in strollers or carriers). 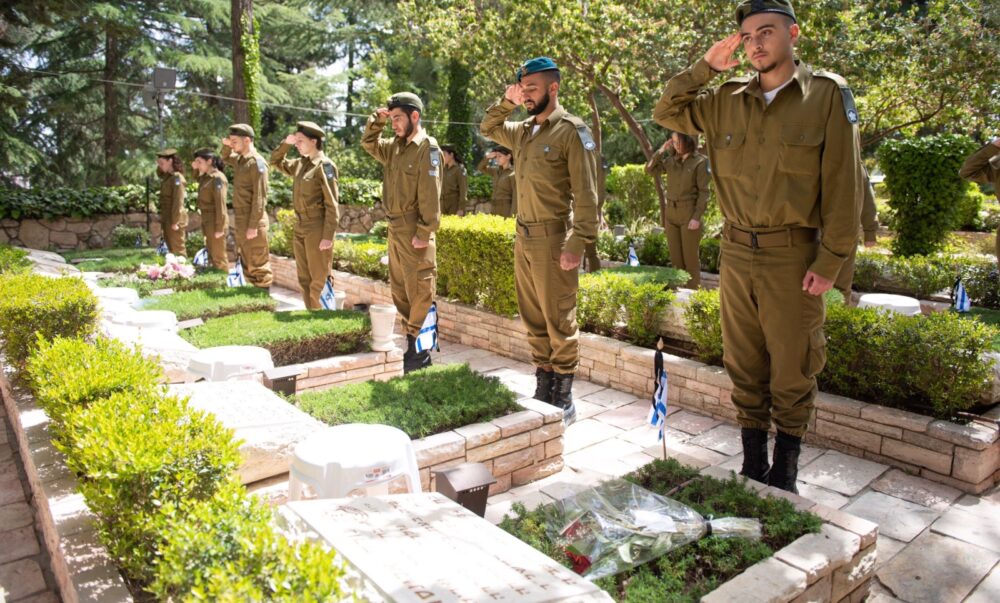 A cemetery might seem like an odd choice for a top stop to visit, but Mount Herzl is definitely an exception. The largest military cemetery in the country and the burial ground of the country’s greatest statesmen, it provides an essential piece of history without which Israel cannot be understood. It’s also a beautifully kept and serene site, although best avoided in the midday summer sun. 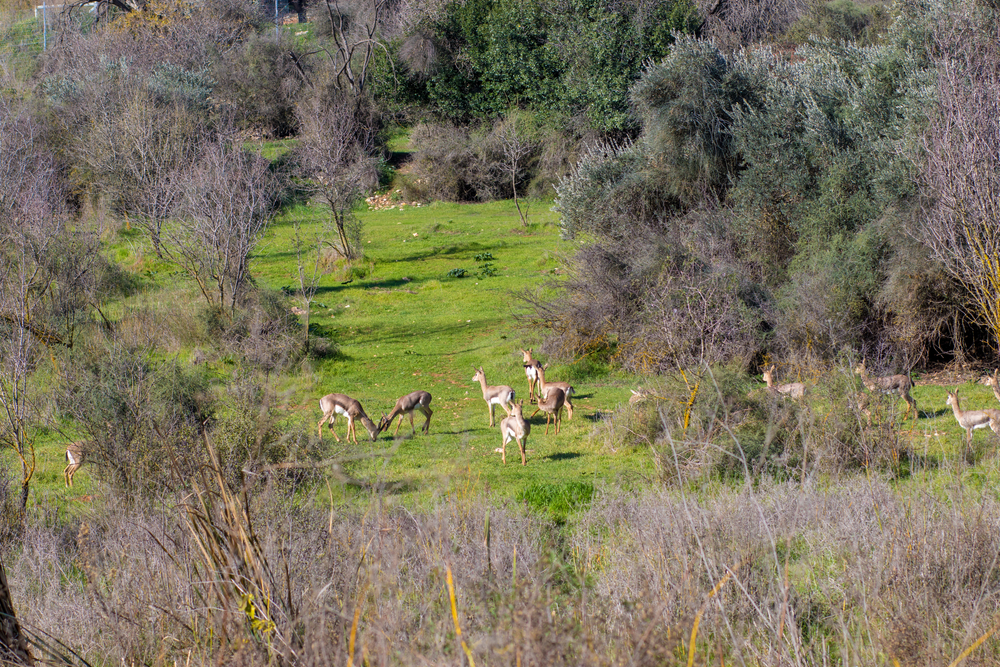 Catch a sight of some lovely wildlife at the city’s Gazelle Valley. Photo by Yosefus / Shutterstock

Another example of amazing urban wildlife can be found at Gazelle Valley toward the city’s south. The park is home to a herd of mountain gazelles that serves as a breeding population meant to reintroduce the endangered species back into the wild. There are also 500 species of plants, a lake, ponds, birds and even tortoises housed in their very own shelter. Entrance is restricted to daylight hours, and dogs aren’t allowed inside. 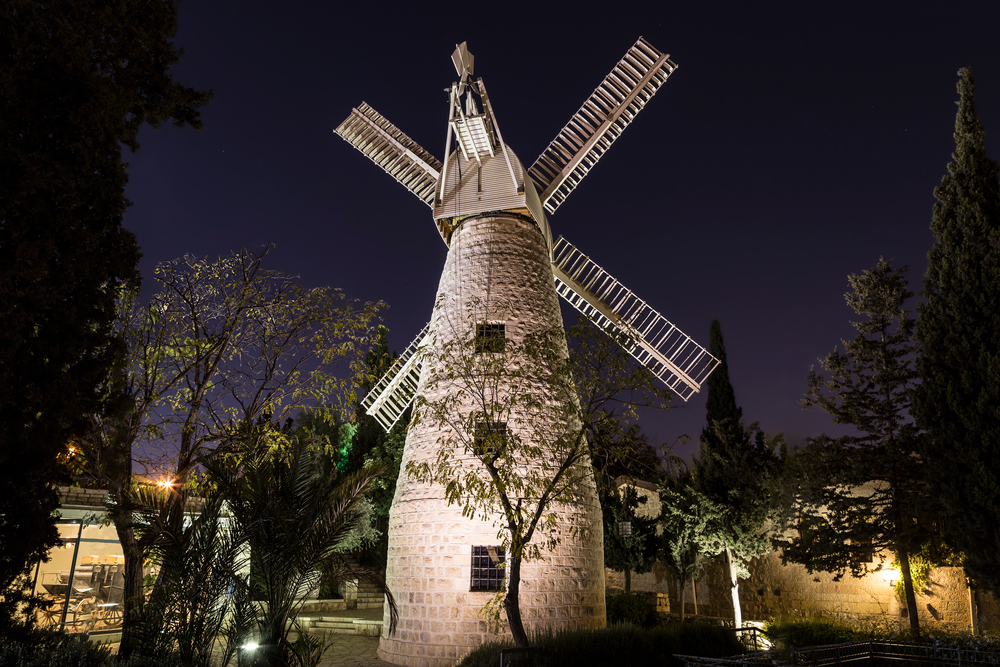 The Montefiore Windmill is one of Jerusalem’s most romantic spots. Photo by Volkova Natalia / Shutterstock

Another Jerusalem landmark (and one where yours truly wanted to get married when she was younger), the 19th century Montefiore Windmill symbolizes the beginning of the modern-day city, when its residents began moving outside of the ancient Old City walls. The restored windmill houses a permanent exhibition and the large plaza boasts one of the best views in the entire city. Situated at the entryway to the beautiful Yemin Moshe neighborhood, this is a great place for an afternoon or early evening stroll. 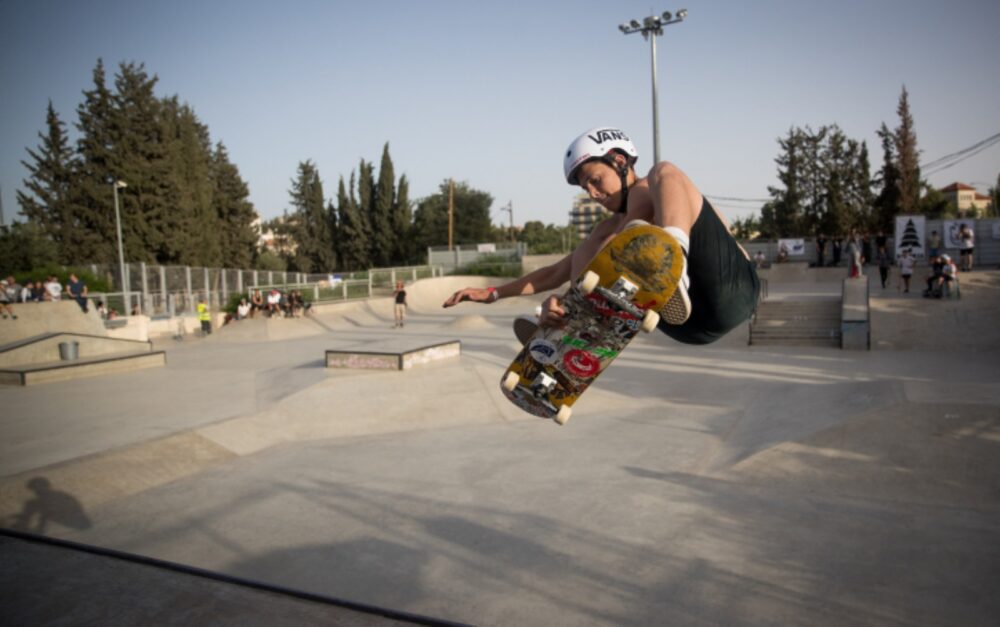 Jerusalem’s skate park is a hub of activity for local kids, teens and families. Photo by Yonatan Sindel/Flash90

Located at the Liberty Bell Park just across the road from the above windmill, the skate park is a hub of activity for local kids, teens and families. It caters both to beginners and more advanced skaters, and also has room to seat their avid admirers. Come here for a bit of fun and to check out a very local cultural scene that’s almost unseen in other parts of the city. 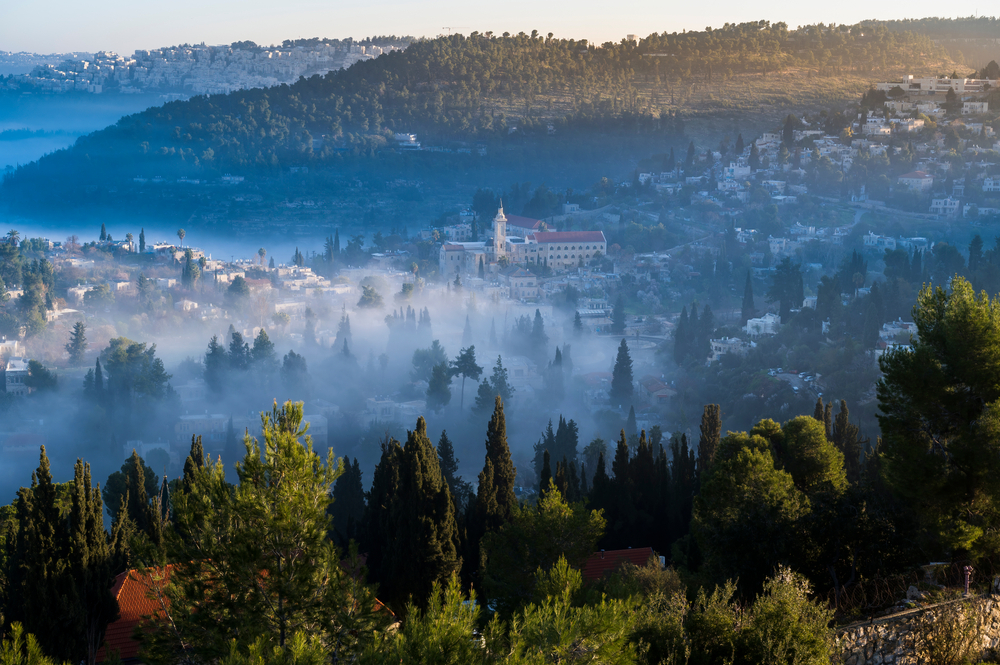 Towering church steeples are the hallmarks of the picturesque Ein Karem neighborhood on the outskirts of Jerusalem. Photo by John Theodor, via Shutterstock

The Ein Karem neighborhood on the outskirts of the city is definitely one of its finest. It is picturesque, village-like and home to gorgeous homes, valleys, views and important Christian landmarks such as the Church of the Visitation – not to mention a famous chocolate and ice cream shop. Bear in mind that a walk across the neighborhood involves a lot of uphills and stairs, and that it’s better to dress respectfully to enter religious sites. Also, you’d best avoid the entire area on Saturdays, when its open restaurants (a rarity in Jerusalem) mean that it’s absolutely packed.

The First Station compound is lovely to visit night or day, and hosts a variety of free and interesting events. Photo by Roman Yanushevsky, via Shutterstock

The First Station complex, formerly the site of Jerusalem’s old train service, has become one of the city’s leading leisure areas and home to a variety of restaurants, craft kiosks and ice cream parlors. But on the free side of things, it also hosts cultural events such as Kabbalat Shabbat ceremonies, yoga and Pilates lessons, shows and free movies on summer nights by students from Maaleh Film School. It’s a great place to bring little ones with their bikes, as they can freely roam around without danger of making it to the road. 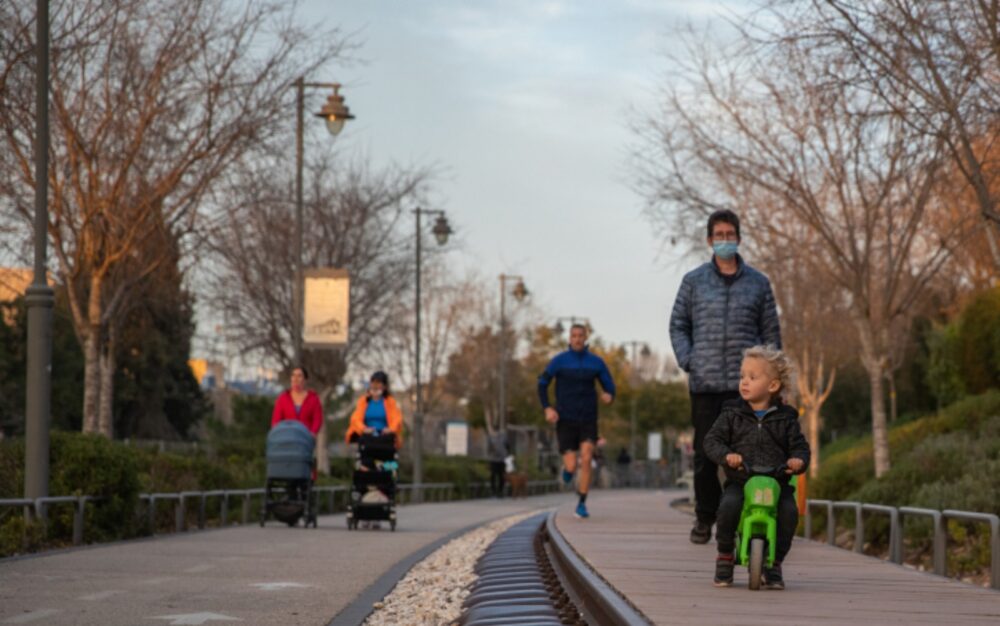 Jerusalem’s urban Train Track Park is unique and particularly visitor-friendly in that it hardly has any uphills – a rarity in the local hilly landscape. The reason for this bit of convenience is that it runs along the old train tracks that used to connect Jerusalem to Jaffa and which were originally laid in the topography that minimized as much as possible hard labor for the old-fashioned trains. But it’s not only ease of walking which makes this park a great attraction – it encompasses numerous and varied Jerusalem neighborhoods and has historical plaques, little playgrounds and workout areas all along the way. 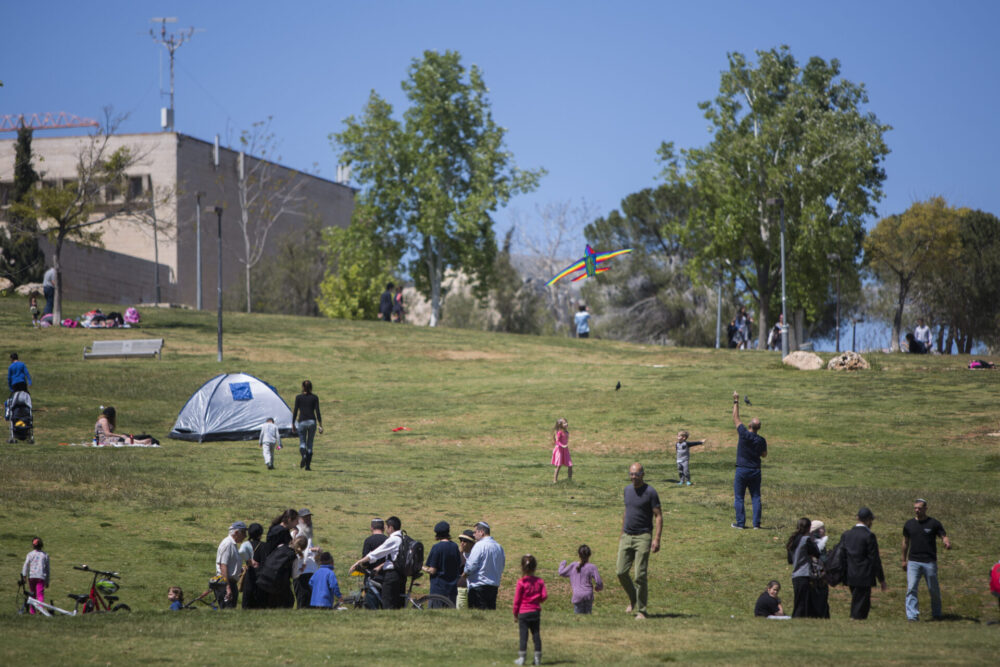 For years, Jerusalem’s Sacher Park was somewhat of an eyesore – dirty, slightly dubious and not well-lit. But recent years have seen it undergo a real transformation, and it is now one of the loveliest green spots in the city. The large (by Israeli standards) lawns and shady trees offer multiple picnic spots, while the winding paths are a popular running track. There’s even a café and kiosk situated on site to spare you lugging food items, and the whole area is pleasantly lit in the evening. Public holidays make it pretty crowded and full of barbeque smoke, but mid-week it’s absolutely great. 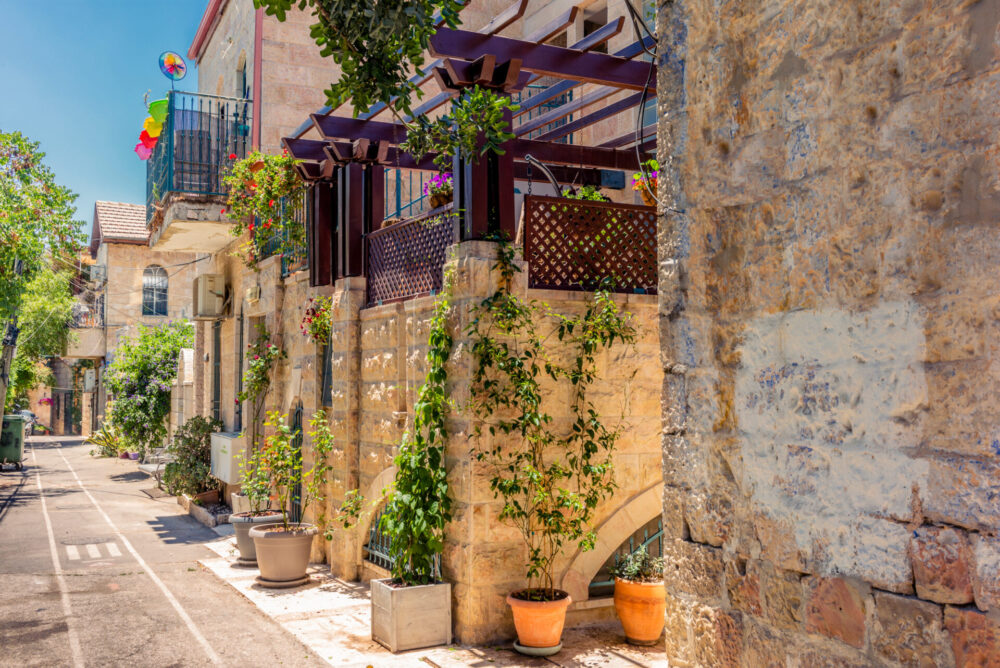 Bougainvillea grows in a quiet alley in the unique Nachlaot neighborhood. Photo by Gdefilip via Shutterstock

Right across from Sacher Park is the city’s famous Nachlaot neighborhood. Established in the 19th century, the low-rise neighborhood suffered from years of neglect, poverty and hardship before turning into the hipster magnet that it now is. A walk along the unique stone courtyards, cobbled streets and narrow alleyways is a proper Jerusalem experience, as is popping in and out of the multiple cafés that are dotted throughout. 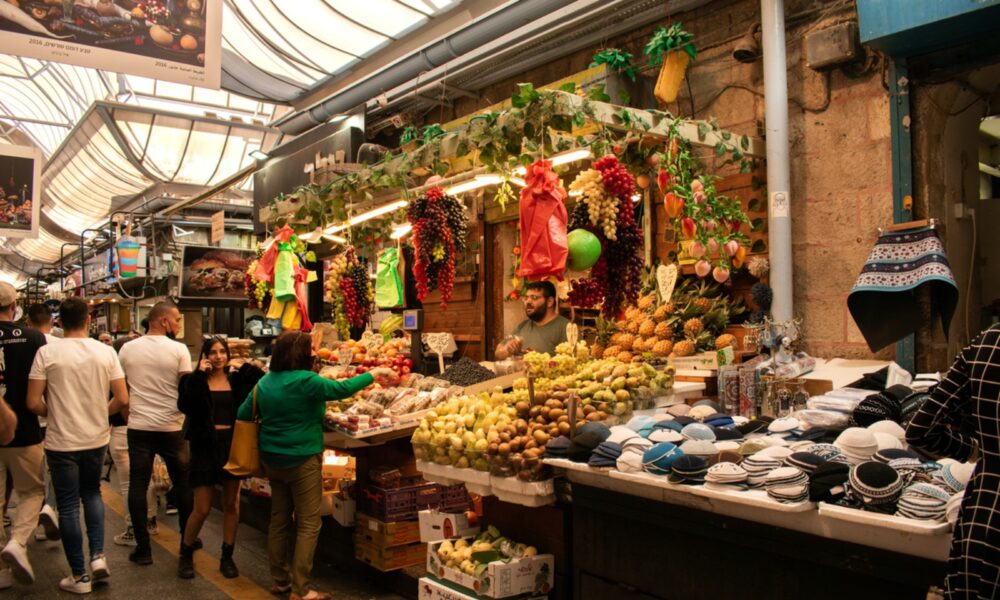 Enjoy the smells and sounds of Jerusalem’s famous market. Photo by Sivan Simhi

Bordering one side of Nachlaot is Jerusalem’s world-famous Machane Yehudah market. Sure, purchasing all the deliciously fresh produce, breads, juices and sweets is not exactly free, and neither are the multiple coffeehouses and restaurants, but the atmosphere is absolutely priceless. You can very much walk around, experience all the smells and sounds, snap a few pictures and enjoy being at the very beating heart of the city. People take in the view from the promenade at the Ethiopian Jewish community’s annual Sigd celebration in Jerusalem. Photo by Olivier Fitoussi/Flash90

The lengthy stretch of the Haas-Sherover-Goldman Promenades gives visitors one of the best possible views of Jerusalem, with the Old City in all its glory right bang in the middle of it all. It’s a great place to go for an added-value leisurely stroll, or for a fee, to opt for a Segway option. Just don’t expect to be alone – the promenade is a favorite spot with locals, religious groups, tourist buses, army groups and – best of all – brides and grooms on their pre-wedding photography sessions.

“We can’t sit by when this level of disaster strikes”