The city of Tel Aviv can boast of being many things—among them being Israel’s cultural center and the vegan capital of the world, but it can also boast it’s historic White City area, thanks to its many buildings constructed in the Bauhaus architectural style now celebrating its 100th year. Incidentally, the same year Tel Aviv celebrates its 110th anniversary.

Around 4,000 buildings built between the 1930s and Israel’s establishment in 1948 were constructed in the Bauhaus, or International style. White City in downtown Tel Aviv is the largest grouping of Bauhaus-style buildings in the world, due to the sad turns of history.

“Bauhaus” was a school of arts, crafts, and architecture that operated in Germany from 1919 to 1933. The rise of the Nazi Party led to the shuttering of the school, and many of its students left Nazi Germany, some of them to pre-state Israel. Many other Jews also left Germany for Mandatory Palestine, including architects who didn’t study at the Bauhaus school but were greatly influenced by its style. 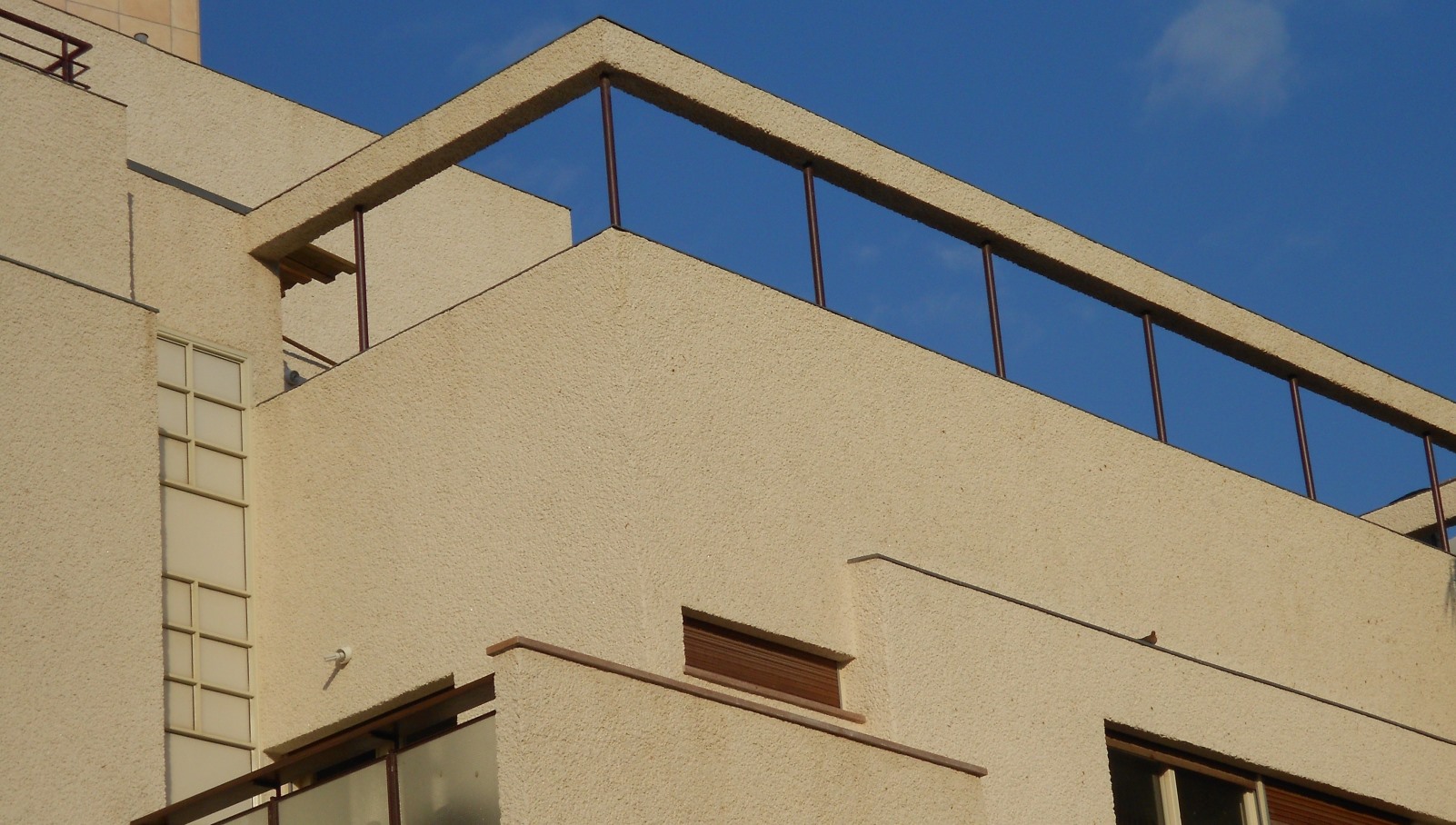 A close-up of an International Style building on Mapu St. in Tel Aviv. Photo courtesy of Bauhaus Center

Pre-state Tel Aviv, founded in 1909, was still a small city at the time and the large immigration wave of the early 1930s meant there was an urgent need to house all the new arrivals. The style chosen for the rapid construction was International.

It also favored function over form and focused on buildings that would serve their residents. This is one of the reasons International-style buildings don’t look the same all over the world, as different places have different needs.

“If you build a house in France, then the climate is very different from here in Tel Aviv. Accordingly, the houses built here were different. They were looking to suit the climate here,” says Micha Gross, the director of Bauhaus Center Tel Aviv.

“Instead of large windows like in Europe, the windows here are small, because there’s too much light and too much heat,” he explains. “That’s why there’s at least one big balcony.” 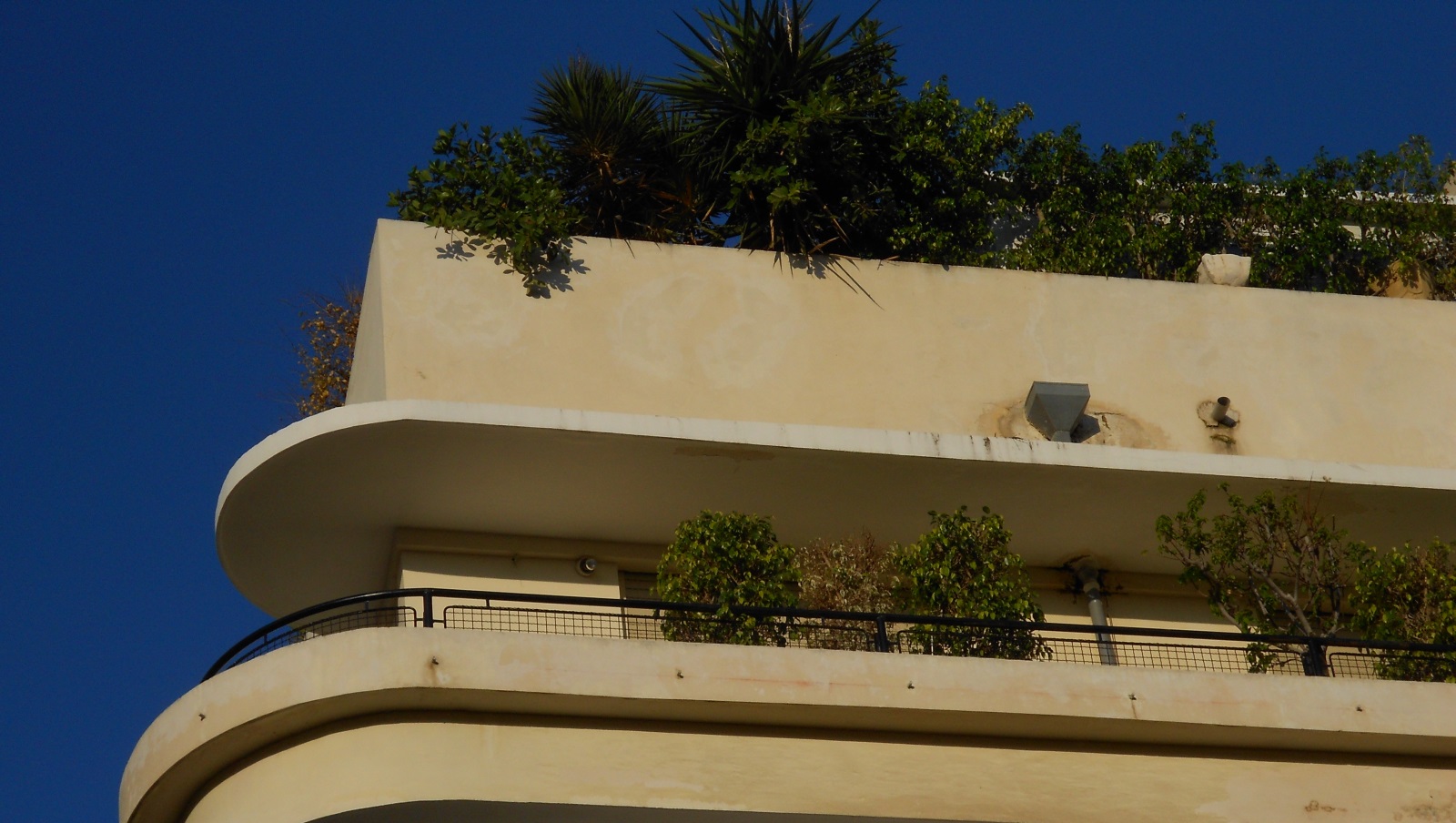 Balconies were an important element of International Style architecture in Tel Aviv, as seen in this building on Emile Zola St. (Bauhaus Center)

Another local feature of the International style influenced by the hot climate, and one easily observed when walking around Tel Aviv, is flat roofs. “There’s the flat roof that’s very useful here. You can go up on it, create a garden, hold parties, hang the washing,” Gross says.

Despite these variations, the local buildings still adhere to the universal principles of the International style. Aside from being super functional, they are characterized by their asymmetry, a notion that was revolutionary at the time. 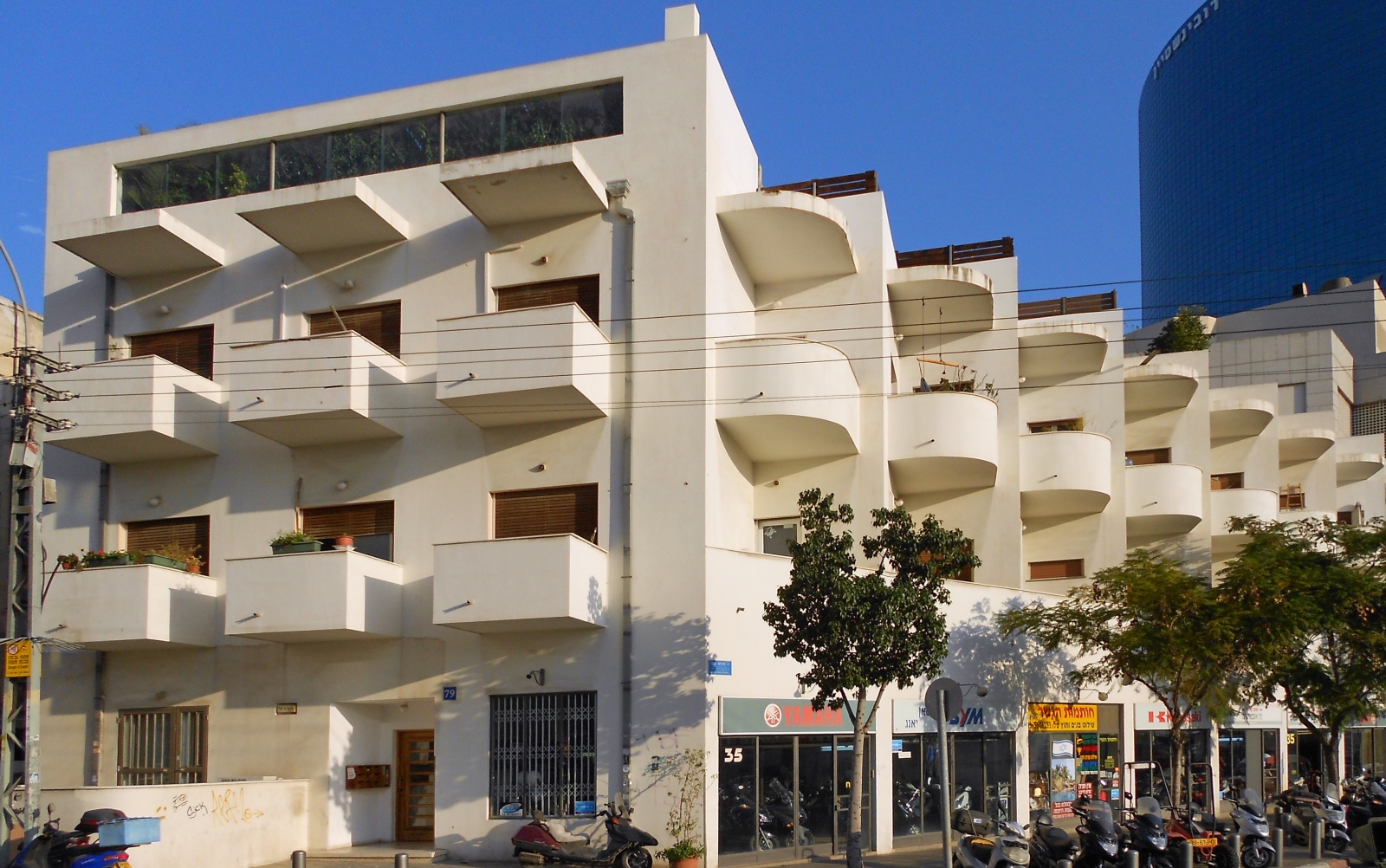 International Style buildings are characterized by their asymmetry, as seen in this building on Begin Road in Tel Aviv. Photo courtesy of the Bauhaus Center

They were also built using reinforced concrete and are held up by pillars and not the walls themselves, thanks to the technological developments of the time.

Tel Aviv’s White City spans from Allenby Street in the south of the city up to the Yarkon River in its north. On the east, it’s bordered by Ibn Gabirol Street and Begin Road, and to the west by the Mediterranean. Not all of the buildings in this large area are in the International style, but those that are stand out in their clean and clear style.

“They say there’s about 4,000 buildings built in that style in Tel Aviv. About half of them are designated for conservation,” says Gross. The decision depends on many factors, he explains, including whether it is original, where it stands and whether the architect was important. 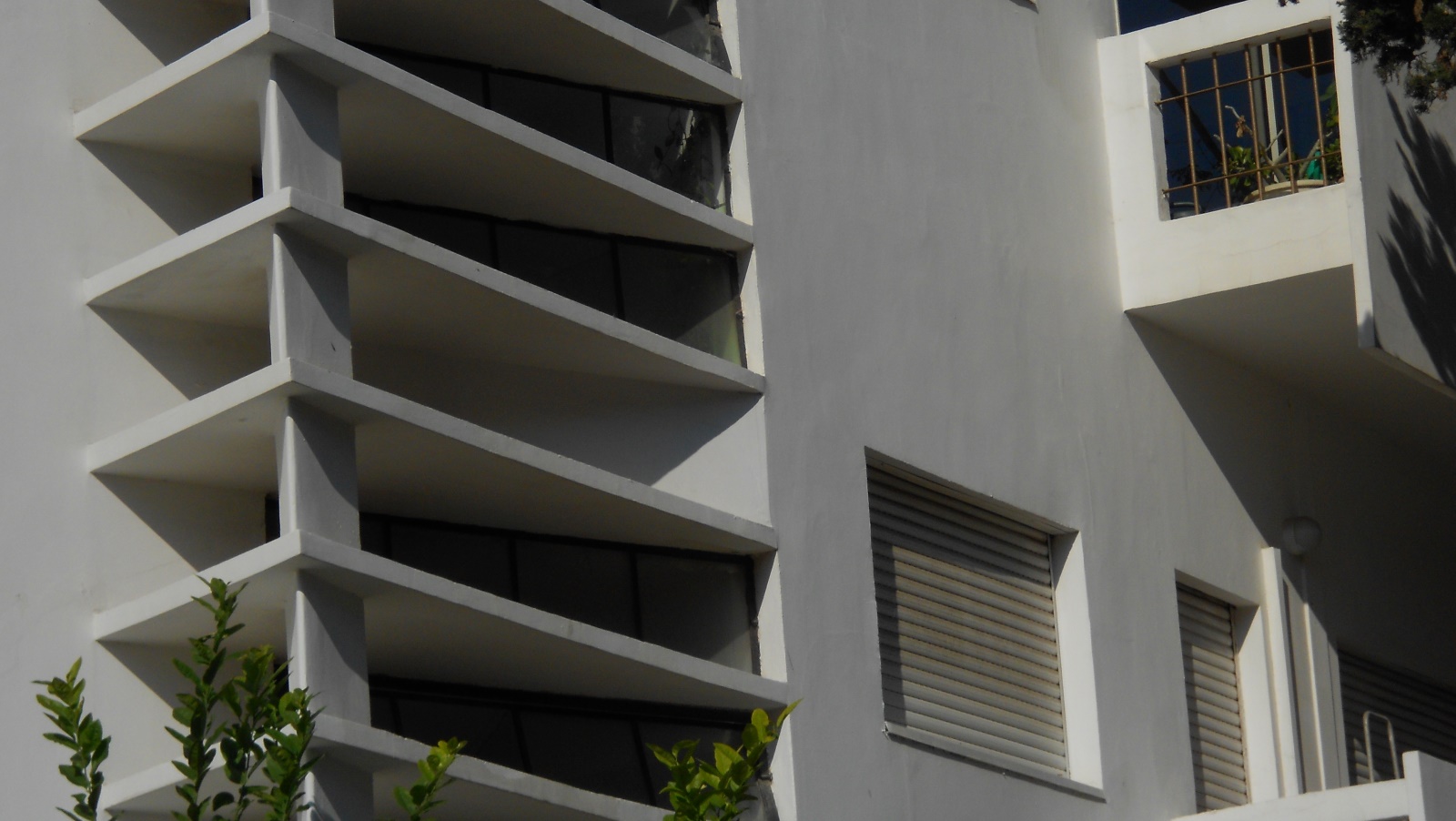 Clean angular lines are one of the hallmarks of International Style architecture, seen here on Frug Street in Tel Aviv. Photo courtesy of the Bauhaus Center

This last point is particularly interesting. Gross estimates that around 150 architects worked in the International style in Tel Aviv at the time, but not all of them are known.

“Some of them built more, others less. It’s a really big group,” he says. “The majority were born in Russia, Ukraine, and Poland but studied in Germany.”

Out of all these architects who ended up in Israel, only six actually studied at the Bauhaus school, a fact that hasn’t stopped the Bauhaus name from being much more commonly known in Israel than “International style.”

A Bauhaus student who immigrated to Israel was Arieh Sharon, one of Israel’s most prominent architects. He put into practice the social ideals taught at the German school, for example by building cooperative workers’ housing in Tel Aviv. 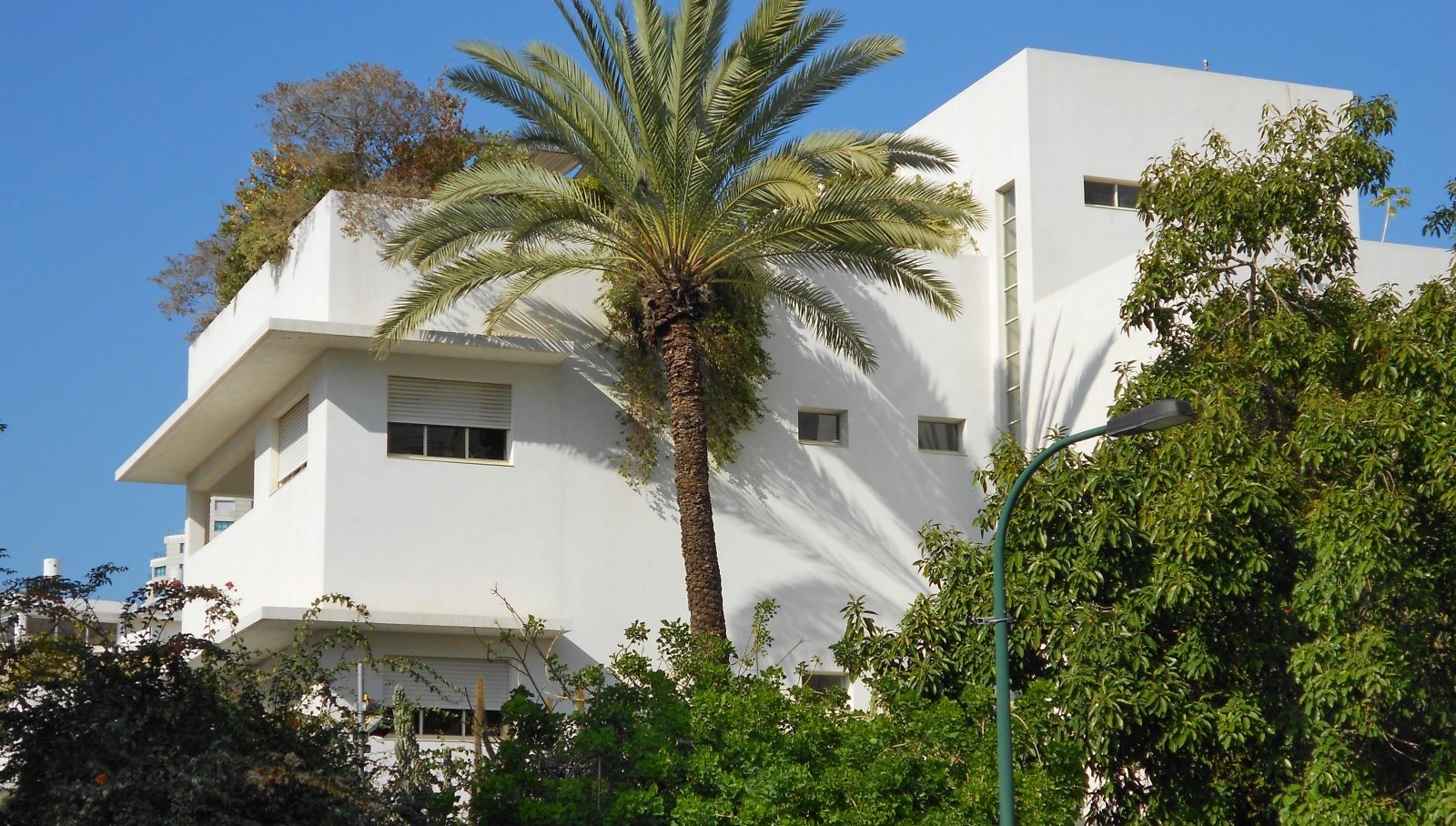 A Bauhaus style building on Idelson St in Tel Aviv. Photo courtesy of the Bauhaus Center

Bauhaus buildings are undergoing renovations all across the White City, but Gross estimates that only one-third of them have been restored so far – including renovations carried out 20 years ago that Gross jokingly muses now need to be restored again.

The Tel Aviv Bauhaus Center is celebrating Bauhaus’ centennial with a number of exhibitions and events. First up is an exhibition exploring the works of architects Josef Rings and Erich Mendelsohn, which will run at the center on Dizengoff Street during February and March 2019.

The next exhibition at the center will take place at the end of June, and will focus on Dizengoff Square, possibly the only Bauhaus-style square anywhere. In September, the center is set to run an exhibition on architect Arieh Sharon.

The center will also run special tours marking 100 years of Bauhaus. Tours are guided or self-guided tour with the help of an audio guide available in English, German, Chinese, French, Italian, Russian and Hebrew.

“You just need to walk around the White City and enjoy the variations on the same theme,” Gross explains. “A house that’s circular, another with straight angles, yet another with protrusions — it’s interesting to see how the same thing is changed over and over again.”

“It’s very important for us today. If we could make some sort of connection here it would be very successful,” he concludes.