The Temple Mount comes to life at Davidson Center

The newly-constructed Ethan and Marla Davidson Exhibition and Virtual Reconstruction Center is situated at the entrance to the Jerusalem Archaeological Park, one of the largest, most significant archaeological sites in the country. It is approximately 350 feet south of the Temple Mount complex, in the recently excavated and restored underground storage complex belonging to a seventh century AD Umayyad Palace.

The new center offers the visitor an in-depth archaeological and historical introduction to the Jerusalem Archaeological Park by means of an exhibition of archaeological objects, augmented by visual, textual and audio information. One of the highlights of this modern facility is a real-time virtual reality reconstruction of the Herodian Temple Mount as it stood prior to its destruction by Roman troops in the year 70 AD. Real-time technology allows users to interact with the computer environment, enjoying freedom of movement as in the physical world.

The most technologically advanced computer graphics, sound, and architecture currently available in the visual computing industry are employed in the Davidson Center.

The center uses cutting-edge visualization tools, including a powerful Silicon Graphics Onyx2 InfiniteReality3 computer, a high-resolution display, and integration technology. This provides audiences with breathtaking three-dimensional images that are at the same time scientifically accurate. 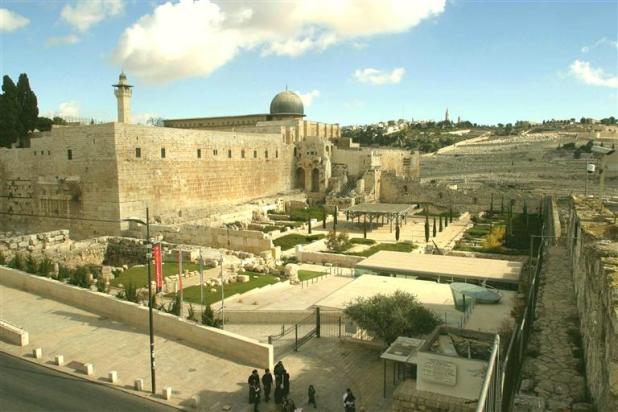 The Davidson Center offers a rare opportunity to explore and study the most significant archaeological site in this country by means of exhibitions and illustrations describing Jerusalem’s main episodes. The center serves as an extension of the Archaeological Park, highlighting its main features.

The Exhibition is laid out on three floors: the Entrance Floor, the Mezzanine Floor, and the Ground Floor. Access between the floors is afforded by moderate ramps. The visitor is here invited to embark on a 60-minute journey through Second-Temple-period Jerusalem.

The Exhibition Gallery surveys four of the main periods represented in the Jerusalem Archaeological Park: the Second Temple, the Roman, the Byzantine and the Islamic periods.

The Jerusalem Archaeological Park, Israel’s most important antiquity site, reaches the Temple Mount on the north, the slope of the Mount of Olives and the Kidron Valley on the east, and the Valley of Hinnom on the west and the south. This exceptional area, which has captivated the world’s imagination throughout history, has been designated as an archaeological park and open museum.

Visitors to the park follow events spanning some 5,000 years, beginning with the Canaanite (Bronze) Age and continuing through the days of the Israelite monarchy in the First Temple period. The splendors of the Second Temple and the impressive architecture of King Herod, dating to the second half of the first century BC are a key element in the park, and the remains and monumental structures dating to the Christian and Muslim periods are clearly visible.

Originally posted at Israel and You.