Home Culture 11 gorgeous pictures that capture the beauty of Sukkot

11 gorgeous pictures that capture the beauty of Sukkot

Green is the color of fall in Israel, green with a hint of yellow. It’s been that way for centuries, though not on account of the mild Mediterranean climate. The colors of fall in Israel are steeped in Jewish tradition and a commandment from the Torah that Jews commemorate the time our ancestors lived in the desert, in temporary shelters called sukkot, as they journeyed from Egypt to the Land of Israel. 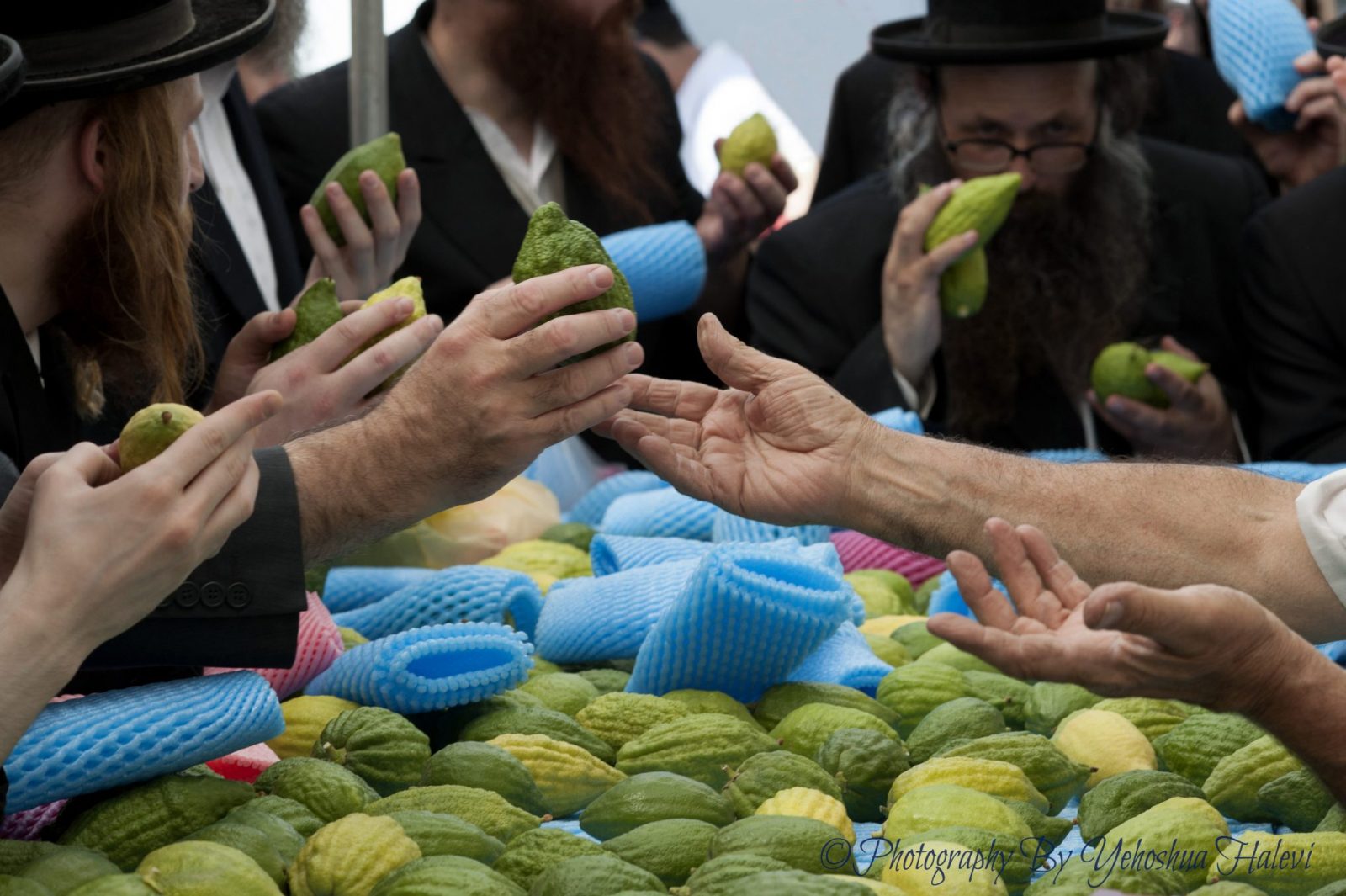 This year, the weeklong festival of Sukkot (Tabernacles, in English) began at sundown on Wednesday, October 4, with the rise of the full moon of the Jewish month of Tishrei. 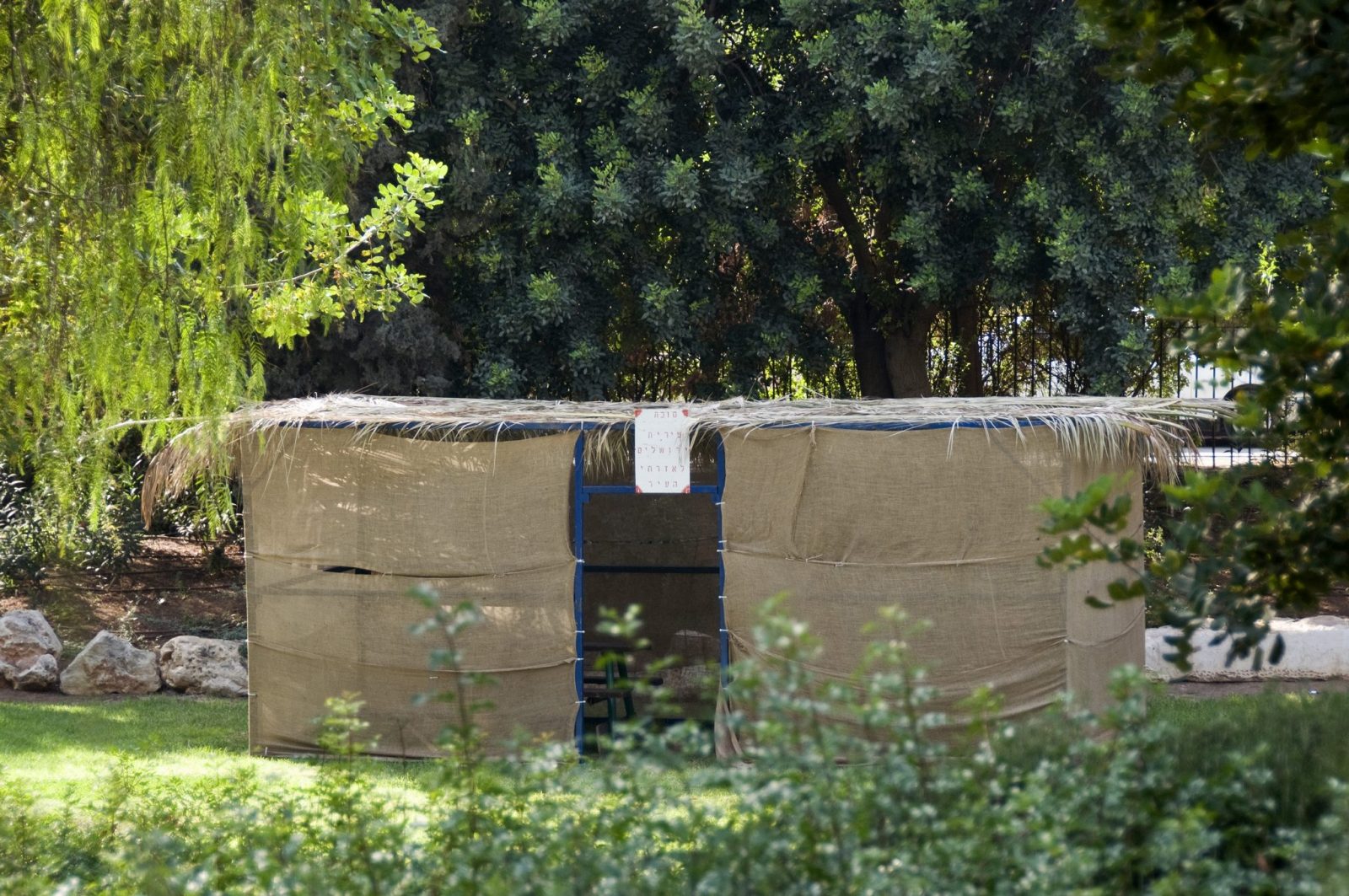 A sukkah built in a public park below Jaffa Gate in Jerusalem. Photo by Yehoshua Halevi

The holiday comes at the height of the harvest season, when farmers in times past built sukkot in their fields in order to spend the night close to their crops and maximize the hours of reaping. 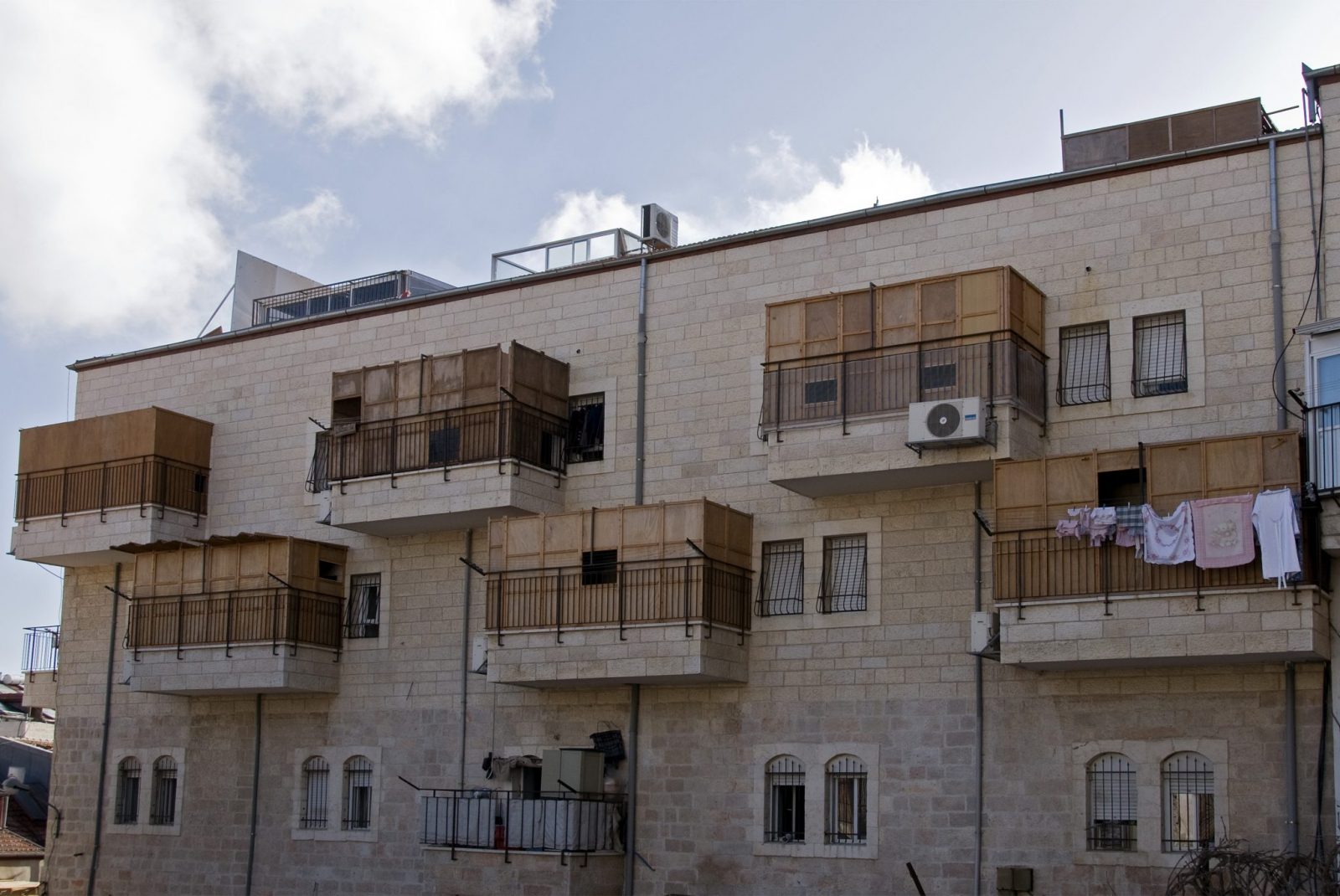 Sukkot fill the balconies of a building in Jerusalem’s ultra-Orthodox Mea She’arim neighborhood. The balconies are staggered so each sukkah’s roof is properly exposed to the sky. Photo by Yehoshua Halevi

The sukkah can be made of any material but according to Jewish practice the roof must be made of a natural material (such as branches or bamboo) with enough gaps so that the sky is visible to the people inside. 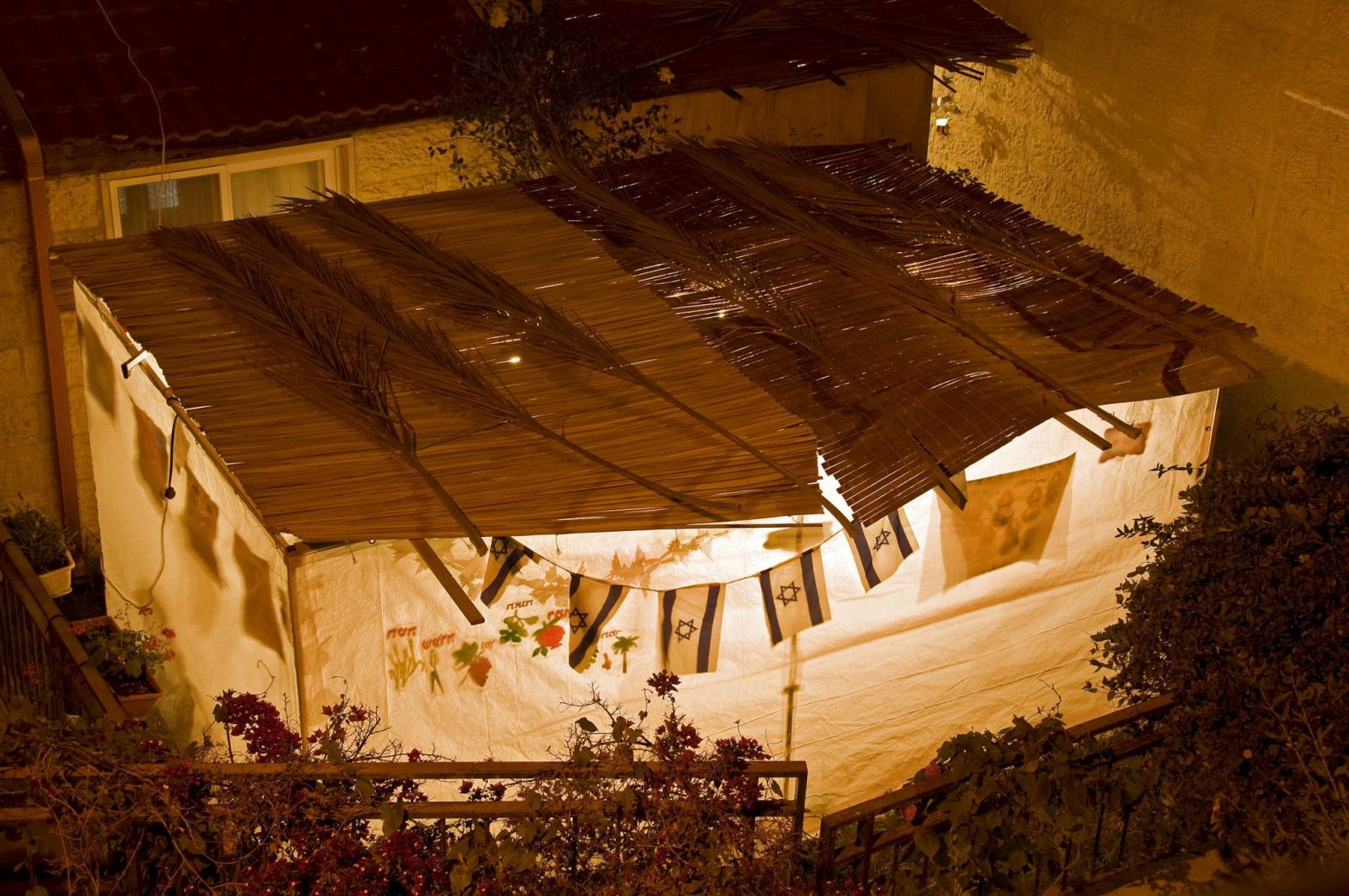 An Israeli sukkah illuminated for an evening meal. Photo by Yehoshua Halevi

In Israel today, the harvest includes not only produce grown for food but also for the components of the arba’at haminim, the four species — etrog(citron) fruit, aravah (willow) and hadas (myrtle) branches and lulav (palm fronds) — which combine to form the central symbol of the holiday. 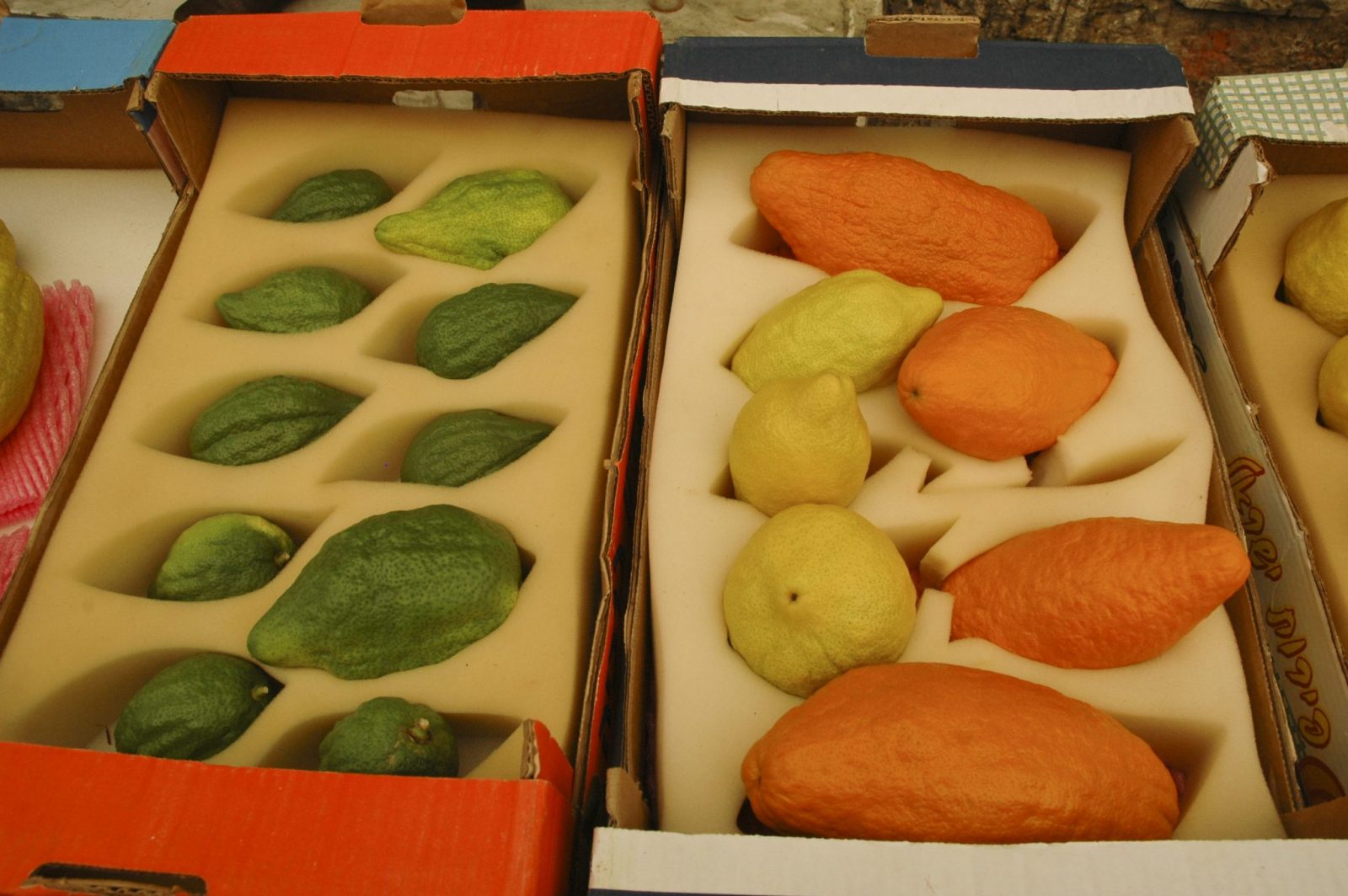 Etrogim (citrons) for sale in the Bukharan market in Jerusalem prior to Sukkot, including orange Yemenite etrogrim. Photo by Yehoshua Halevi 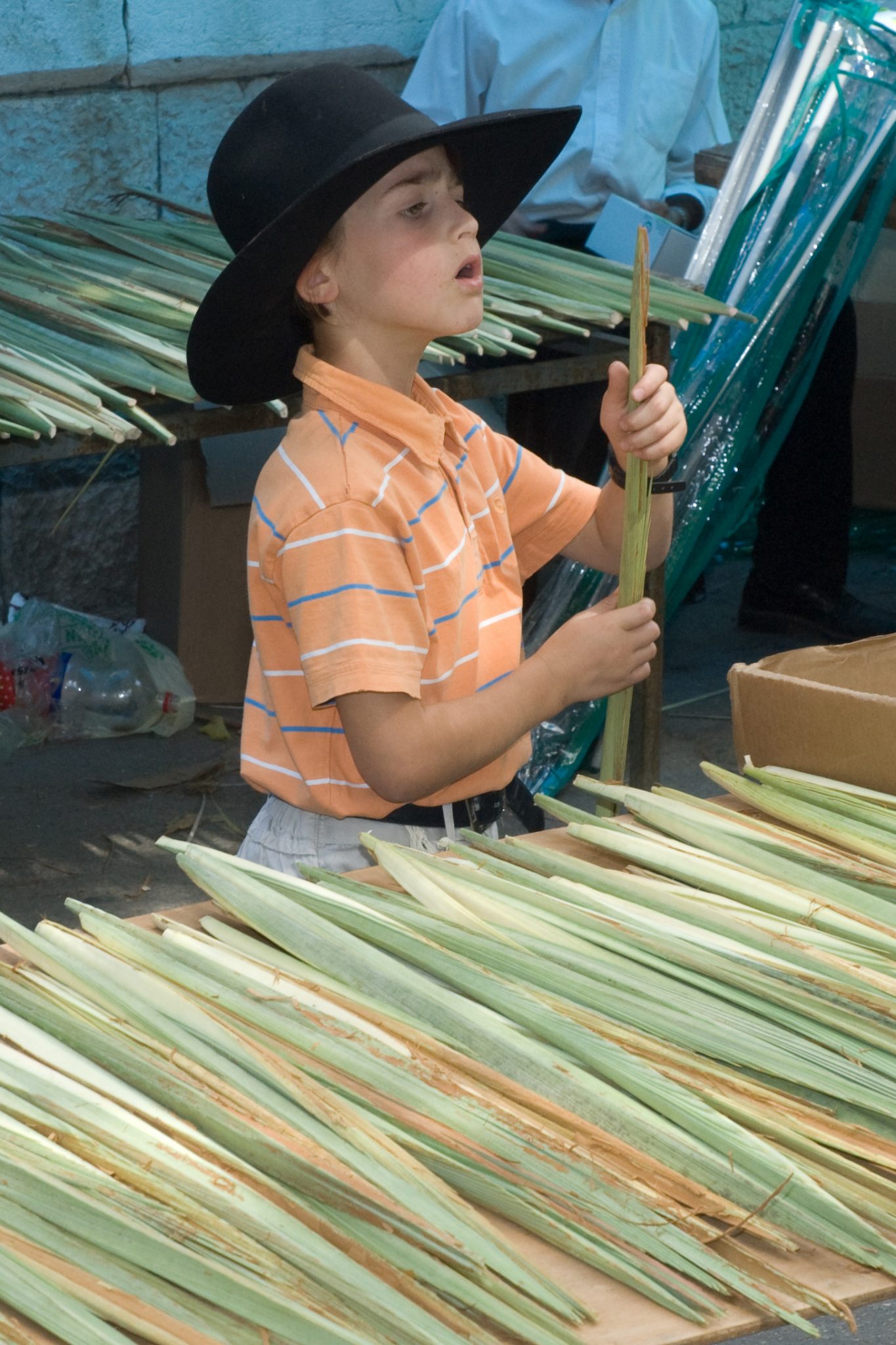 A boy examines the tip of a lulav (palm frond) on the lookout for imperfections. Photo by Yehoshua Halevi

Across Israel, in the days leading up to Sukkot, makeshift markets appear selling the four species as well as sukkah decorations and a host of materials that enable quick and easy construction of a sukkah in an urban, residential setting. 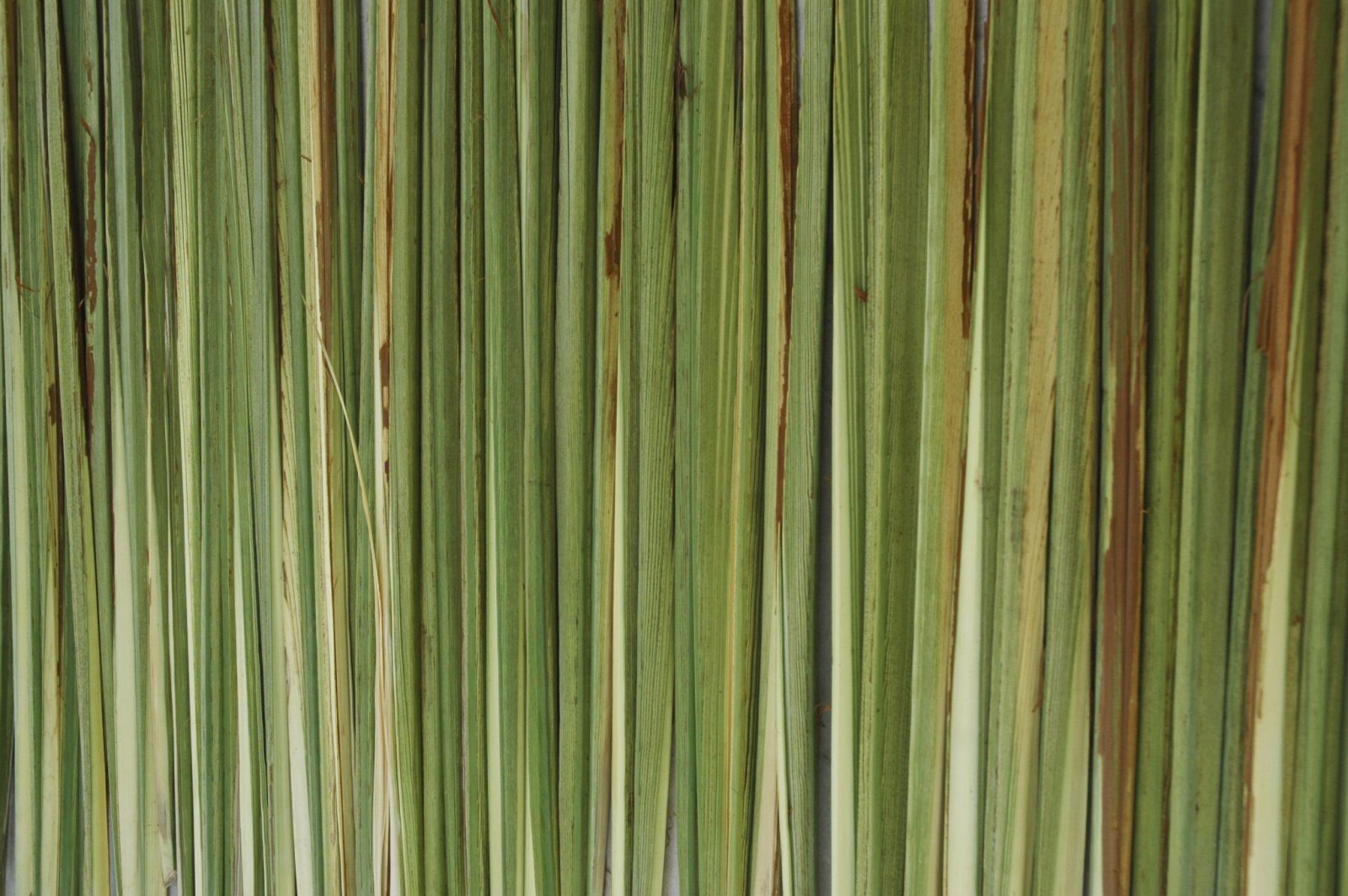 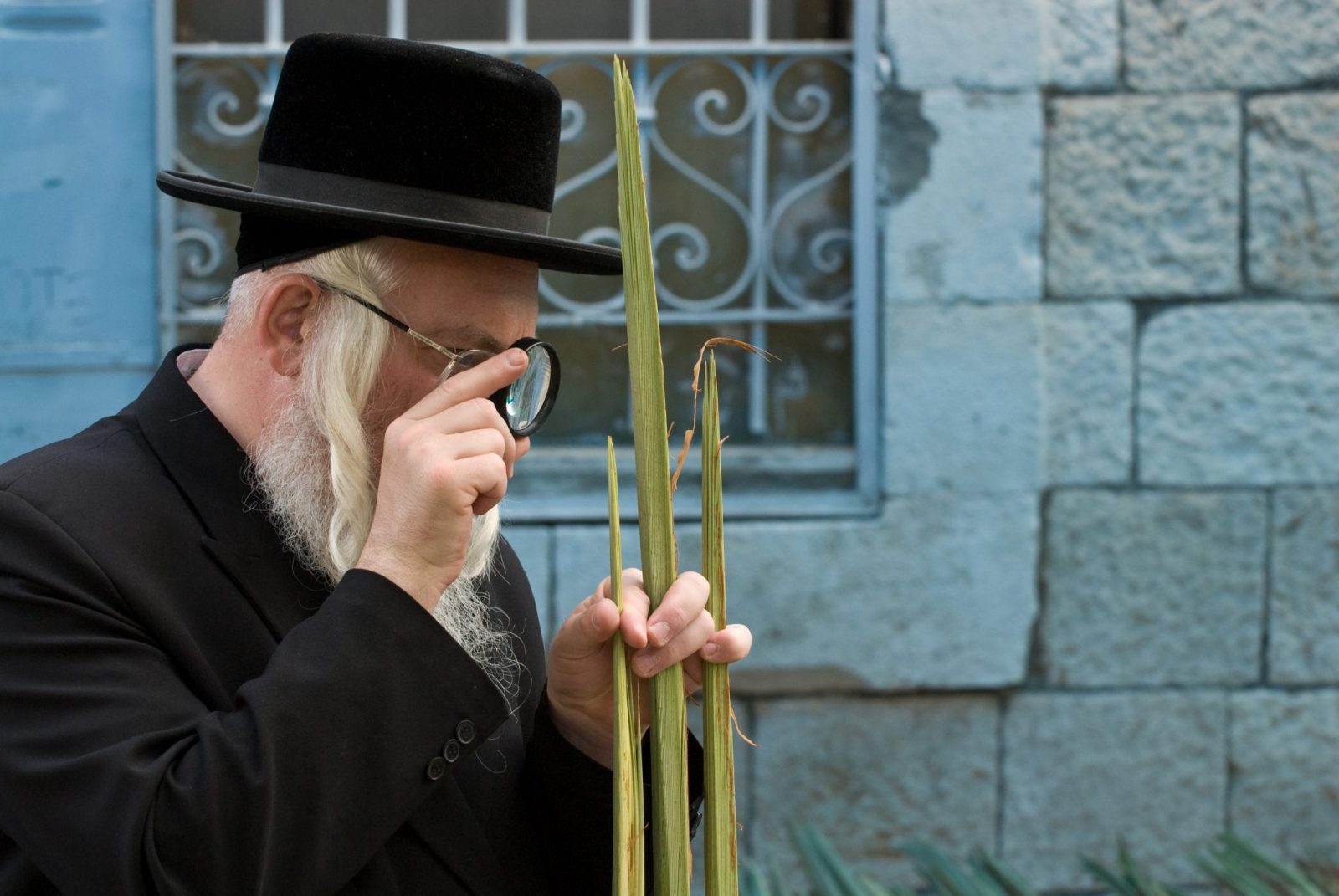 A man carefully inspects a trio of palm fronds before making his selection. Photo by Yehoshua Halevi

Throughout the holiday week, Israelis enjoy festive meals with friends and relatives in the outdoor huts constructed for this purpose. With the kids out of school, it’s also a time to travel around the country celebrating the bounty of the land under clear skies before the rainy season begins. 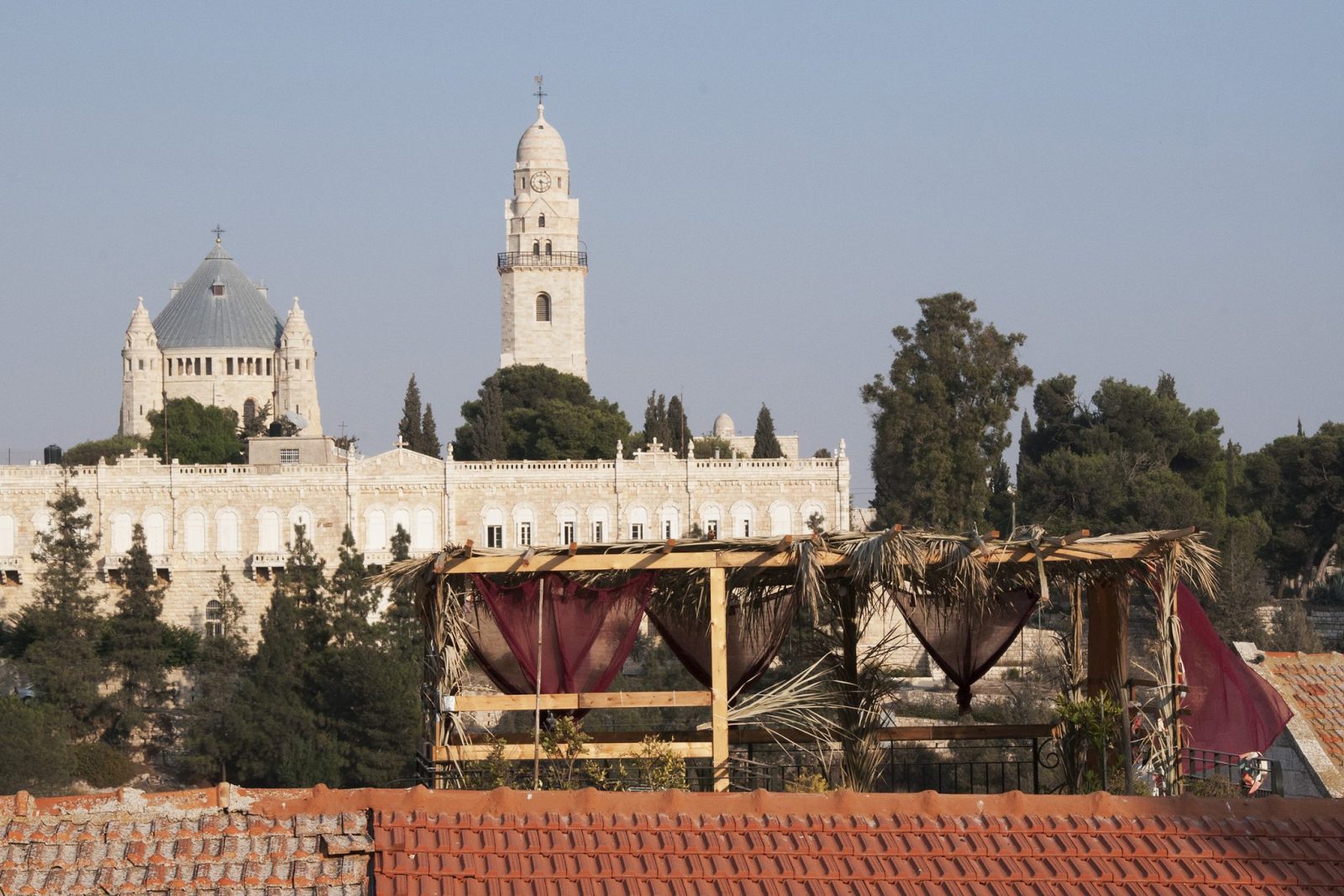 On a rooftop in Jerusalem’s Yemin Moshe neighborhood, a sukkah affords fabulous views of the Old City walls outside the Armenian Quarter. Photo by Yehoshua Halevi

Sukkot is also a popular time for both Jewish and Christian tourism to Israel. Visitors wishing to take their meals in the holiday tradition will find sukkot set up at hotels, in national forests and in many municipal government complexes. 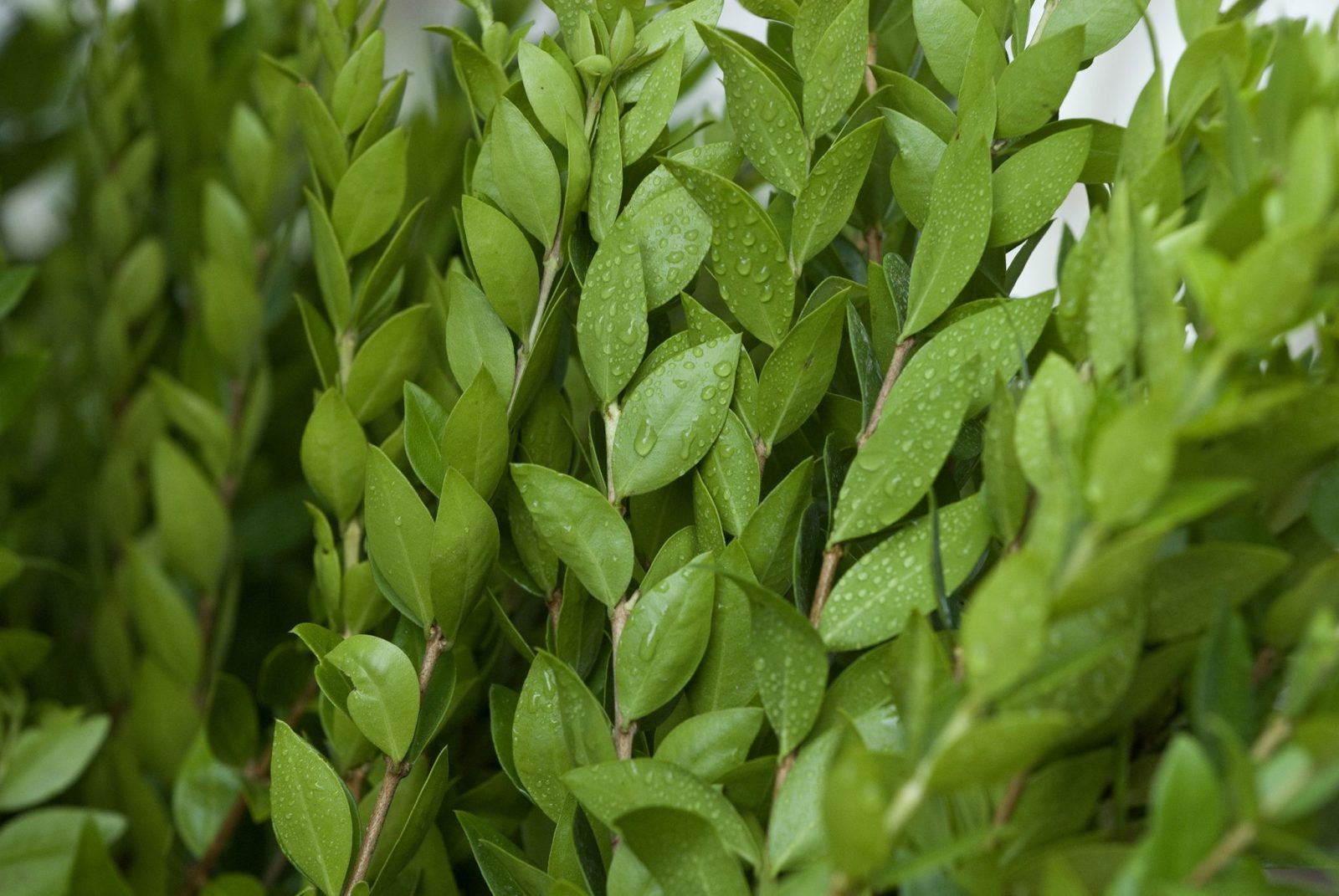 Cut hadassim (myrtle braches) are kept fresh with water in the marketplace. Photo by Yehoshua Halevi
Originally posted at Israel21c.

Israeli Soldiers are Planting Olive Trees in Your...

TOMORROW! Visit the Town of the Relatives of...

A Land Flowing with Milk and Honey? It’s...

HIT network of hosts eager to welcome back...